by scottyk
Ok guys, I have a scenario for you.

I drove the truck to work on Friday. I got new tires at the tire place. By the time I got to the place to pick the truck up, it was dark. The truck wouldn't start. After I got a jump, I was on my way home. The battery light stayed on. On the way home, the lights got dimmer and dimmer until I could barely see. However, the truck never died and the headlights never went out. About a 20-25 minute drive home.

Of course, I plan on getting a multimeter tomorrow and testing the alternator when I get the chance.
by after oil
i understand that because diesels run off compression, rather than spark, the motor will go w/o alternator or battery. (but it wont start)
by asavage
Once running, the SD22 requires no electricity at all and will happily run until out of fuel.

Your charging system is not working. Probably the alternator, but bad wiring can cause this as well, especially the fusible links (right off the positive battery terminal) and the connections right at the back of the alternator.

If the wiring checks out, check the brushes first. I'm not certain about the A/C version . . . well, I guess I am: no direct access to the brushes cover. 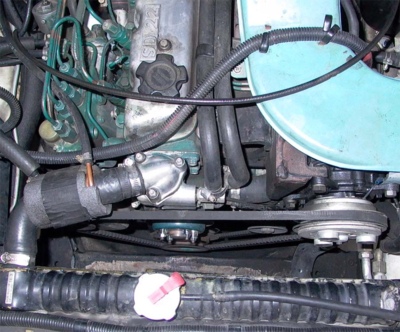 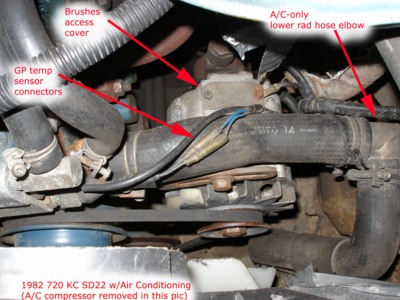 The compressor may be in the way, but on the non-A/C models you can inspect and replace the brushes without removing the alternator. 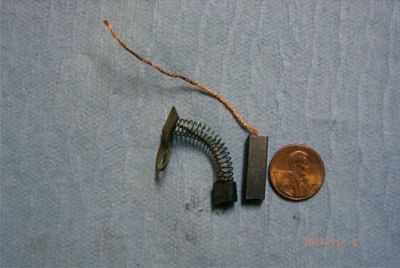 you'll want to remove the alternator (leave the vacuum pump with the engine: unbolt it from the back of the alternator, it's only three bolts) and have it tested at your FLAPS or wherever.

If they condemn it, consider buying a used one from Matt in TN. I've already offered him $20 so you'll have to go considerably higher

If you are interested if trying to repair the alternator yourself, check out my post on the LR150 alternator, it's chock full of pictures, part Nos. and prices.
by philip

after oil wrote:i understand that because diesels run off compression, rather than spark, the motor will go w/o alternator or battery. (but it wont start)

"After Oil" has the exception.

The Bosch VE with its electric fuel control solenoid. At some low voltage level, the solenoid will close off the fuel supply ... shutting down the engine.
by scottyk
Hmmmm, I may have solved the problem. See, the end of the fusible link that connects to the battery was very brittle. It came apart yesterday. This may have been causing a loss of power to the electrical system. I got a different fusible link from Auto Zone and spliced that onto the end of the original fuisble link metal. Tonight, I started the truck and put on the headlights. They stayed on!! Drove it around the neighborhood and also let it sit in the driveway for well over 15 minutes, and the lights stayed on!! The battery light didn't go off, though, so I may still have a problem with the battery. But it doesn't look like the alternator is bad.


asavage
Your charging system is not working. Probably the alternator, but bad wiring can cause this as well, especially the fusible links (right off the positive battery terminal) and the connections right at the back of the alternator.

Al did mention the fusible link and wiring. Should have listened to him.

Use the voltmeter, and you'll see that the voltage is not going above 13.5v when off idle. No charging.
by scottyk
I also happened to be looking under the hood, and noticed that the alternator was not turning, or was barely turning every so often. The belt was slack. After loosening the top and bottom bolts, wriggling my arms around the A/C stuff, and adjusting the alternator so it was tight, I locked down the bolts. Started it and it ran. But I'm not sure if that fixed all my problems, I have to wait until I have some more time to mess around with it and drive it on a few shakedown cruises.
by scottyk
Well, it was the alternator that was bad. I decided to upgrade the alternator to the Maxima diesel alternator. Once I got everything figured out and on right, the new alternator fit right in. It even came with the vacum pump, all for $123 shipped from a rebuilding place in Columbus, OH off of Ebay. Seems to start up and charge better now.

by asavage
How close to being a "bolt-on" was the Maxima diesel alternator?

If you're going to recycle it, I'll pay shipping on the old alternator, for parts use.
by scottyk
Hey Al, the Maxima alternator was exactly the same in size as the 720 alternator. Bolted right in. I think I am going to hang on to the old alt for now, if I decide to get rid of it I will let you know.
by asavage

scottyk wrote:Hey Al, the Maxima alternator was exactly the same in size as the 720 alternator. Bolted right in.

That's what Philip thought; I wasn't so sure. Thanks for the confirmation.

And the plug-in connector? Does the 720 harness plug right in?


I think I am going to hang on to the old alt for now, if I decide to get rid of it I will let you know.

Just so you don't throw it away. The rotors, in decent shape, are getting rarer. You can have them re-ringed, but that's more $$$.
by scottyk
Yes, the Maxima alt has an extra connector than the 720, but it slips right on.
Back: