[Ignore this thread; it's just a drafting table for me.]

The following is a restatement/condensation/annotation of a series of posts by Mr. MacConnell to the EV600-L listserve, mainly in 2006, plus later private email updates that supply details. The topic is upgrading the OEM brakes on the Jet Industries EV600 ElectraVan, a vehicle based upon the Subaru 360 Van (AKA "Sambar" in countries outside the USA). The Subaru 360 Van is equipped with 10" wheels. The Jet Industries conversion to electric power entails a substantial increase in weight, for which the Subaru OEM brakes are woefully inadequate.

The plastic reservoirs for brake fluid were discarded and the van "underdash" reservoir was retained. The reservoir hoses were attached to the Datsun master cylinder using plastic "tops" from a '79 Mitsubishi truck master cylinder. No proportioning valve was used. It would likely be needed if some type of power booster was installed. No attempt made thus far. 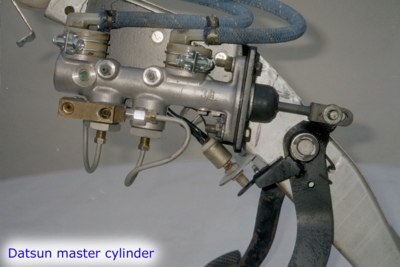 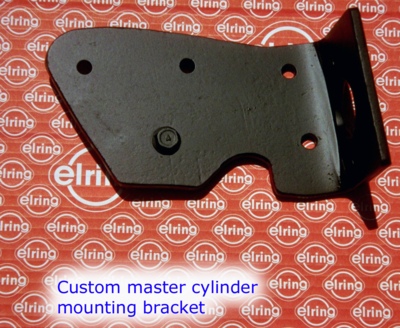 Modifications made to the MG wheel hub: MG used a ball bearing system while the ElectraVan uses tapered roller system. All of the ball bearing equipment (including the races being driven out) was discarded. All you want is the bare hub casting!

There were no modifications made to the outer bearing side at all. All of the machining is done on the inner bearing side. Essentially you are attempting to do two things. first, shorten the distance between the bearings by 11mm. Second, machine the MG hub to accept the ElectraVan inner bearing race and grease seal.

I brought the MG hubs and the ElectraVan front brake drum assemblies down to my machinist and VERY CAREFULLY explained to him what I was attempting to do. Fortunately he was a smart guy and did it just right.

Notes on the Sentra caliper brackets:
My "original" design used solid MG front rotors which proved to be an immediate failure because the MG rotors were too small and overheated badly. The Sentra brackets were used in conjunction with the MG rotor setup because the Sentra uses a solid rotor like the MG *and* uses identical caliper and pads as the Subaru Justy which uses a vented rotor.

My "second generation" design incorporated the vented VW Golf rotors in
order to relieve the overheating problem, which it has quite well. For someone starting from scratch, you just use the whole Justy caliper and bracket assembly and fabricate your adapters accordingly. Forget you ever heard of a Nissan Sentra. I only used them because I had previously drilled my adapters to fit them. No need to repeat my mistakes! 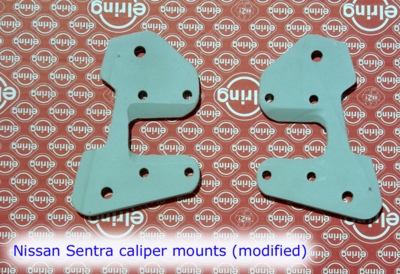 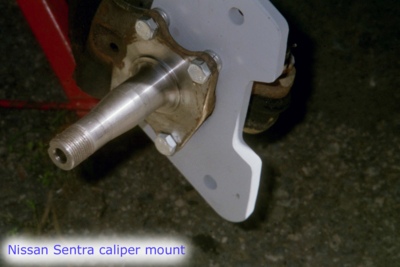 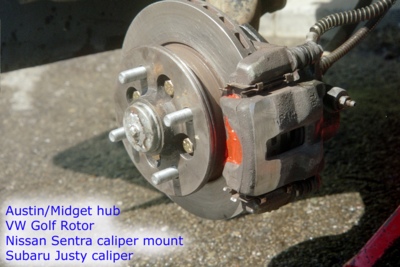 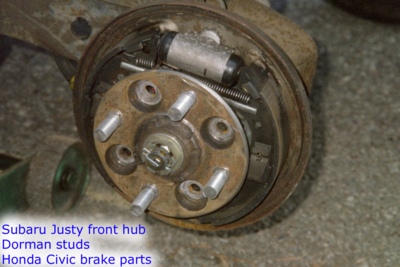 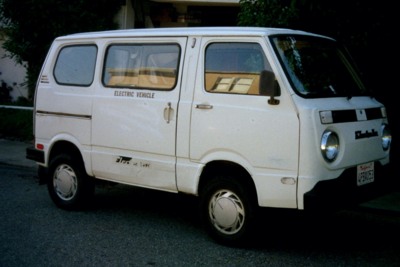 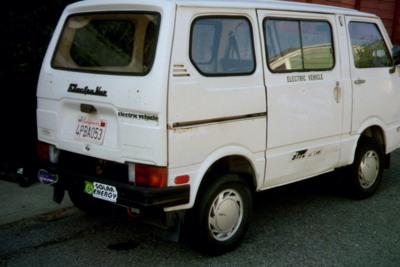 First, permanently install the modified backing plates and mount the wheel cylinders. Note: the van brake line fittings match the Honda wheel cyls. Mock up the shoes and adjusting hardware. You'll notice interference between the Honda adjusting strut and the top of the wheel bearing housing. I remedied this by grinding some metal off the top of the bearing housing and a corresponding flat on the bottom of the adjusting strut. This yields 3-4mm clearance upon assembly. On to the E-brake cables. The plan is to cut down the Honda sheathings to match the van sheathings, using the same mounting place. Then clamp the two cables together. For reference I will call the end of the cable at the brake, the brake end and the other end at the hand lever will be the lever end. First, cut the lug off the lever end , pull the cable out of the sheath and set aside. Next clamp the metal part, at the lever end of the sheath, in a vise and pull the sheathing off. It's pretty easy. Mount the part (from the vise) onto the van swing arm using the van hardware.

Cut the sheath so the length is correct allowing for suspension travel. Note: The sheath is hardened steel. It must be cut with a grinder. A saw won't cut it. Mount your modified sheath to the backing plate and attach the cut end to the metal part (from the vise) using Loctite. Feed the cables through the sheathings. This is a good time to complete the assembly of the shoes & adjusting hardware. To finish the E-brake, take the cables and feed them through the crescent shaped part (CSP) mounted on the rod which runs down the center of the van. One cable from each side. Note: Tight fit. Now clamp the cables using hardware store cable clamps. I used EIGHT of them. You don't want these slipping!

This is the single part which really makes this swap possible. The Justy hubs have the same diameter axle and spline count as the ElectraVan. The Justy hub also has a 4 x 100mm stud pattern which allows mounting the Honda brake drum as well as "normal" wheels & tires.

Since doing the conversion, I have learned that these Justy front hub/flanges come in two sizes. They are a 24-spline size and a 27-spline size. It's critical to get the 24-spline size because the ElectraVan has 24-spline axles. I believe that the 24-spline hubs were only used on the '87 & '88 2wd Justys. I'm not 100% sure of this.

Two things need to be done to the hubs prior to installation. The hubs are now ready to go!

Bolt on the Justy hubs using the van's cone washer and nut. Torque axle nut to spec. (have to look it up). Install the drum, adjust the shoes, bleed the hydraulics, adjust the E-brake , bolt on your wheels & tires.

I recommend an initial test drive to be done on level ground and sparse traffic. Upon completion of mine I completely disassembled it and checked everything out. So far no problems! The braking feel is no different but the motor RPMs are lower due to the larger tire diameter. In closing I'll say I have new found respect for technical writers. If I failed to describe anything adequately, please let me know and I'll try again.

I've been driving the van with its new brakes for over a year now and I am very satisfied with the setup. If I was doing it over again there are two things I might do differently:

First, I would seriously consider mounting the master cylinder on the chassis under the floor similar to the way it was done on the 60's Dodge A100 vans. This would allow room to install a power booster.

Second, I would take a long hard look at using 13" wheels (instead of the 12"ers) with a very low profile tires. The diameter of the tire at the tread is the critical clearance issue. The rim size doesn't matter so much. I will say that it was a huge challenge to get all that disc brake equipment to fit behind a 12" wheel. The 13" rims would also allow larger drums on the rear.