by Dale
Just ate my 2nd transmission, shifted into reverse in my driveway, clutch fully depressed, released clutch and... engine bogs, no movement. Put in neutral, released clutch and... truck goes forward. Stuck in 1st. Just like the last one got stuck in 2nd. And the previous owner had indicated he had several do the same frikkin thing...

Not sure I can keep feeding transmissions to this hungry beast.
by plenzen
Not sure what to tell you.

( I prefer the Red Line myself )
by Dale
I can't even find a local trans shop that will touch it... I'm getting the idea these things are junk. This last trans lasted about 2000 miles. Anyone want to buy the clunker?
by plenzen
That's unusual that no trans shop will deal with it. The transmission is essentially the same as the gas model. The bell housing is the biggest difference and in fact there are some members here that have successfully converted the gas trans into the diesel.
The parts kits are available for it and it is really no different than any other manual 5 spd transmission.
I think perhaps you should talk to a different shop.
I had no issue whatsoever getting mine rebuilt at the very first shop I went to.
As for them being a POS I would have to disagree with you on that as well. The early models had a weaker front brg that would start making noise after a few hundred thousand miles, but, I believe that Al addressed that issue in a link to the fix for that with an alternative brg number.
Get it built by someone that know what they are doing and it should give you years of loyal service.
by Nissan_Ranger
If they don't want to touch it, PERFECT!. It's the classic mark of a business that wants to get easy money and do nothing for it. Good one to stay away from as they usually combine their lack of ambition with a lack of true skill...

N_R
by charmalu
That is really strange with the problems you are having with these 5-spd boxes.
This Friday Oct 18 will make 32 years ago I bought mine. we are just about to roll over 479K miles. the only problem I have ever had, is to replace the input shaft bearings which seem to be the main problems these have. 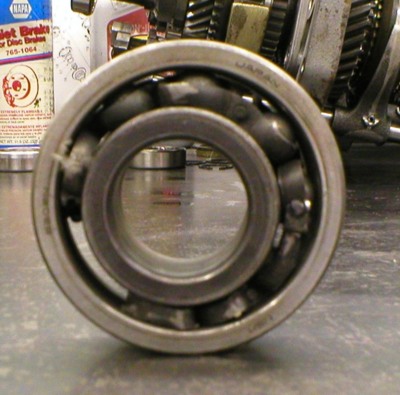 AMSOil is worlds better than the OEM 1981-era gear lube.
by charmalu
I guess I have been fortunate with this transmission, or it is my driving style. with 479K and only two times in those miles I had to replace the bearings says something.

Charlie
by asavage
I'm an AMSOil Preferred customer too (costs only $20/year). Have been for a couple of decades.

Nachi's a good Japanese bearing, but I prefer FAG or BCA. I've installed Nachis though.
by elminero67
For those that had transmission failure, were there any warning signs-or did they go out without warning?
by asavage
There's usually a LOT of warning. Whining in all gears except 4th is the big one. The drain plug is magnetic and will be covered in CHUNKS of metal if the bearing gets bad enough.