Thanks again for the help!
by ecomike

I think I see what I was doing wrong. I never would have figured that out in a million years the way the imageshack and FAQ code samples here and there are shown. Thanks! Now if I can just find this page sample next time I want to post a picture using there service!
by asavage

Buy the way I made several trips yesterday and only had a little bit of trouble for about 2 seconds after shifting out of reverse and back to first at start up on the first trip. I put it back in reverse and back in neutral a second time with no problem, and it worked flawlessly after that. I ran all five gears and reverse several times on multiple trips and so far it looks like I am going to be OK and not have to pull that friggin thing. I just need to get the boot and bushings installed and rig up a nice outer boot setup to seal the floor now.
by ecomike
Well it did it again today. Ran the freeway in fifth gear, got off the freeway and it ran OK in 1-4th gear and on the last turn into the parking lot it frooze up again in neutral. Seemed like it had a hard time rotating the striker guide as well. Had to turn it off and fight with it for about 4 minutes then all of sudden it went back to working prefectly. No problems the rest of the day, but can't trust it and it's so unreadable making it hard to diagnose.
by asavage
Yeah, that's the way mine was too.
by Knucklehead
Uh, isn't high and bent the way shifters are supposed to be? 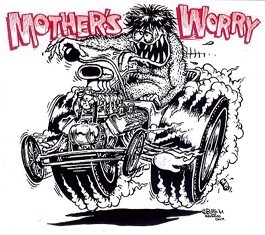 Anybody think adding some kind of snake oil to the stiker guide will help any?
by asavage 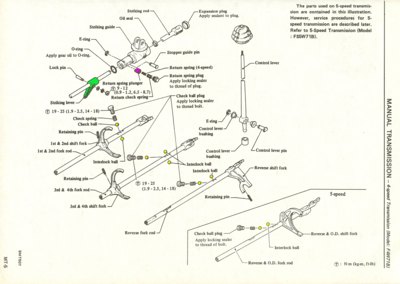 My guess, from the illustration, is that either the striking lever (green) is worn, and/or the interlock balls (yellow) are not able to travel freely, or the return spring plunger (purple) is sticking. Those are my guesses at this point.
by goglio704
This post is probably of interest to anyone reading this thread.
Plus, I want to be able to find it later if I need it.

by ecomike
Well I tried some snake oil today. OK, not snake oil, just a dab of motor oil on the striker guide and striker rod assy. Got close enough to it, to notice I am missing the rear expansion plug (FSM says to apply sealant to the plug during re-aasembly. Since I did not have any unknown spare parts left over after the rebuild, it must have been missing the expansion plug when I bought it.

By the way I am in the market for an OEM control lever (shifter) for this tranny. This one will get cut to shorten it, and not bent all to hell and back (bejeesus!) like mine is.
by asavage
I've got a core trans. Might be able to remove the plug. No spare shift lever.
by ecomike
Well I made my first junk yard dog trip the junk yard in my life time today, YAHOO! Guess it had to happen sooner or later. It was like sending a hungry kid to the candy store for a jug of milk.

Almost forgot, I test drove it today, made about 5 short stop and go trips, about 5 miles total,used everything but 5th, never got over 40 mph, but so far it works and fells great! Will try a long freeway trip soon, but three fourths of the times I had problems it was within the first few minutes of driving that it stuck itself in neutral, so I have high hopes at this point that maybe it is fixed.
by ecomike