by dyepro
Hi,
I've searched and read but I am still somehow unclear.
I am replacing a marine sd33 with an sd33 out of a frame mounted compressor setup. Are there glaring differences? Is this a bad idea?
Thanks
Stef
by plenzen
The engine is the same.
I see you are from Vancouver and if this marine engine has lived it's life there then there is a very good/likely possibility that we "Simpson Power"
(perhaps even me ) outfitted this very engine. We were the Chrysler Nissan dealers there during the 70's/80's till the line was dropped. I left there in 1977.

Back in the day these engines came to us in a crate with a truck type air cleaner etc on them and we just took things off and bolted things in their place for marine or generator applications. ( fuel pumps of course were set up for gen set use )
Is this a Yellow engine or was it painted Blue ? Might be able to give you a possible age on it. We started painting them blue in 1975 IIRC. It may of course been re-painted by someone else as well I guess. They all arrived from Nissan yellow.

The front damper/pulley setup may be different as well, but will be interchangeable with the 633

Paul
by dyepro
Thanks for your reply Paul!
So the fuel/injection pump would be different on the marine setup vs the industrial-compressor unit?
by plenzen
No it would be the same. It (fuel pump ) may have been set to a fixed RPM but those bolts that hold the throttle in place can be backed off to operate as your marine engine does.

I guess that was a bit confusing what I wrote.

The engines were all the same and the only time the fuel pumps were modified is when they were used on generator sets. They were set at 1800 rpm, but more than that the fuel delivery within the pump was re-calibrated as were the springs on the governor. This was all done at a fuel injection service center. ( Fred Holmes in Vancouver )

If the old marine unit is tired and you are going to replace it I would strip some of the things from it before I discarded it to keep as spares. The fuel pump and injectors to mention a few. Perhaps water pump, maybe the oil cooler.
Or
Just keep the old motor complete someplace and use it as a doner if needed.

How many hours on the compressor ?
by dyepro
Paul, I can't thank you enough for sharing your real world knowledge. A rare thing indeed on the Internet!!
I used to deal with Fred Holmes when they were in my neighbourhood a few years ago now. Great place!
The story on the compressor motor is that it only has 20 hrs!! A sandblasted spent the $$ to have it professionally rebuilt only to have the compressor part die 20 hrs later. He gave up and bought a new unit. I am getting it from an international harvester/scout guy who ended up with it.
So do you think the compressor fuel pump would be the same as the generator one you describe? I would have liked to just leave this fuel system as is if I could. I'd like to avoid timing the pump etc of possible.
by plenzen
It's unlikely that the fuel pump was set up the same as the generator was as there was no varying load that the engine had to contend with.
I suspect that a specific RPM was set on the pump and the two screws or locks were simply wound into place, or, that there is a throttle cable attached so that it may be started at an idle and then throttled up to the max RPM set on the pump by the user so as not to over speed the compressor.
I cannot recall specifically what the max RPM was on the 633 but I think around 4000 RPM. You cannot over speed the engine as the governor will not allow it. That being said I don't know how "tired" your old engine is.
Ask the sandblaster if the RPM is set and goes to that RPM when he starts it or if he lets it warm up a bit and then throttles it up to speed. Even if it's set I still think that it's just the standard pump with the speed screws set to keep the compressor from blowing up

Call Fred Holmes and tell them what you are thinking of doing. Ask them if they think that anything special would have been done to the fuel pump for a compressor application.

Now the oil pressure is low...

by dyepro
Engine in and running had to change over the inj pump after all.
Went for a test run and the oil pressure drops to near zero at idle when warm. This engine should not have any wear issues causing this condition. could I have faulty guages /sensors? Could something in the parts changeover to marine have caused this? the engine had been stored for a few years...something stuck?
Pretty sad
by dyepro
I am running it on SAE 30 as per the engine manual. Am I better off switching to 15w40?

Re: Now the oil pressure is low...

dyepro wrote:Engine in and running had to change over the inj pump after all.

Went for a test run and the oil pressure drops to near zero at idle when warm.

I hope that you have a stuck pressure relief valve.

[story]
About 20 years ago, I borrowed a Pontiac (Bonneville?) diesel (converted from the Olds 350 diesel back to gas engine, and not very well done) from a friend to make a road trip to Mom's. Driving around her place, the oil pressure went wonky. I pulled the oil pan and oil pump, and found a hunk of blue silicone in the pressure relief valve built into the oil pump. Fixed!
[/story]

I'm hoping that your low oil pressure issue is a similar situation, because the alternatives are expensive and no fun at all in a marine app.
by dyepro
Something is definitely up with the senders because the oil warning buzzer will sound even when the oil pressure gauge shows 20 lbs!
I replaced that sender because the connector rusted off and I had trouble finding one that was a direct replacement, found one that fit. The oil pressure sender is also suspect because the entire center contact post is rotating when I wiggle the wire.
Not ruling out a stuck pressure valve, this engine had been in storage for 7-8 years. Not sure how I can deal with it without removing the entire engine!!! Any tips for freeing it? blow air somewhere?
by asavage
Take a look at this drawing of a 70's version in the International Scout II & Traveler:

I know your filter is probably different -- probably not a canister type -- but the three check and regulating valves should be similar. You should be able to remove and inspect them without too much effort.
by plenzen
Might want to try one of the crankcase type additives for cleaning, Rislone, Seafoam. etc etc .
I believe the gasket for the filter mounting housing is still avail. Remove the whole thing and take apart and clean.
Would be good to put an actual mechanical guage on the thing and see just exactly what you have. Look at it both at cold start up and again at operating temp. Make your decision from there.

Paul
by dyepro
The motor is the same in most ways I have the canister filter but with a secondary axillary spin on filter. There is a secondary oil cooler / keel cooler as well.
I'm going to change out these senders and see if there is any change. Ran it yesterday and the oil pressure was solid to 40psi and holding. Stayed fine up to and after normal operating temp. Then oil light went on but gauge was still fine.
by asavage
I have seen oil pressure snap switches fail in that way: make contact at too high of a pressure. There's a spring inside that counteracts the oil pressure, and it can break.

Am I correct in assuming that you have two senders: one small one that runs the oil pressure idiot light, and another, larger sender for the gauge?

If not, and your system is using one sender (the larger style) to do both functions, you may have faulty electronics up at the gauge/light end of things.


dyepro wrote:The motor is the same in most ways I have the canister filter but with a secondary axillary spin on filter. There is a secondary oil cooler / keel cooler as well

If you're able to take pictures of that setup, I'd love to see it. Email me the pictures to this address or upload to here.
by dyepro
Here are a few pictures sorry if they aren't very explanatory I have to all but stand on my head to get at some of the angles! 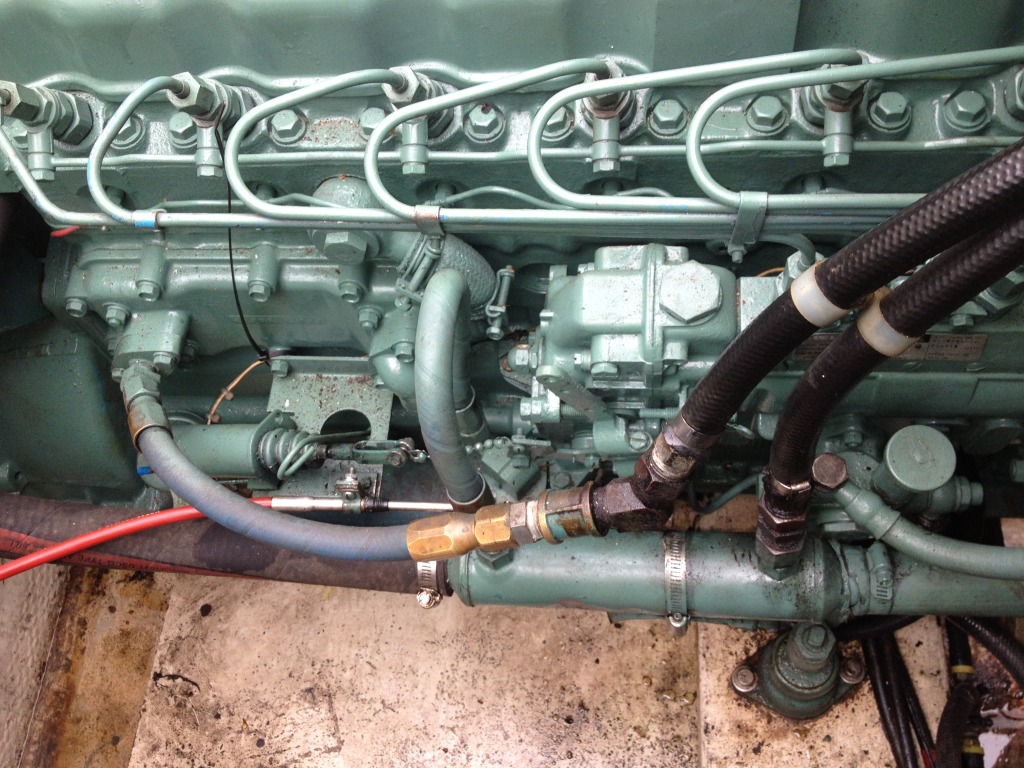 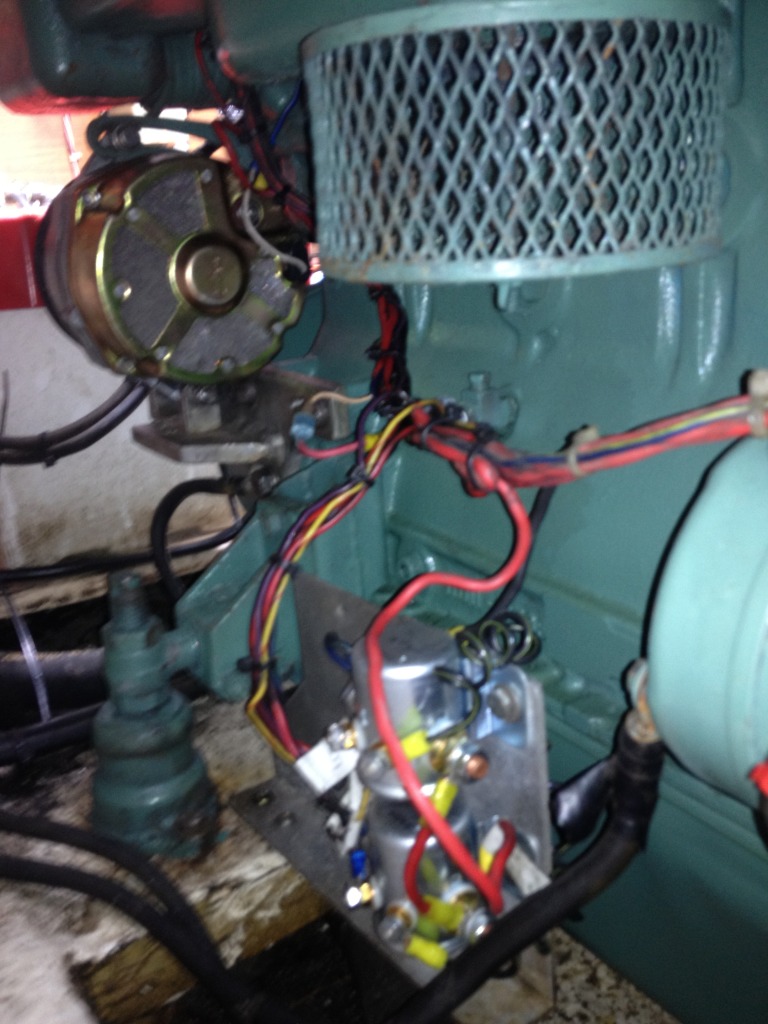 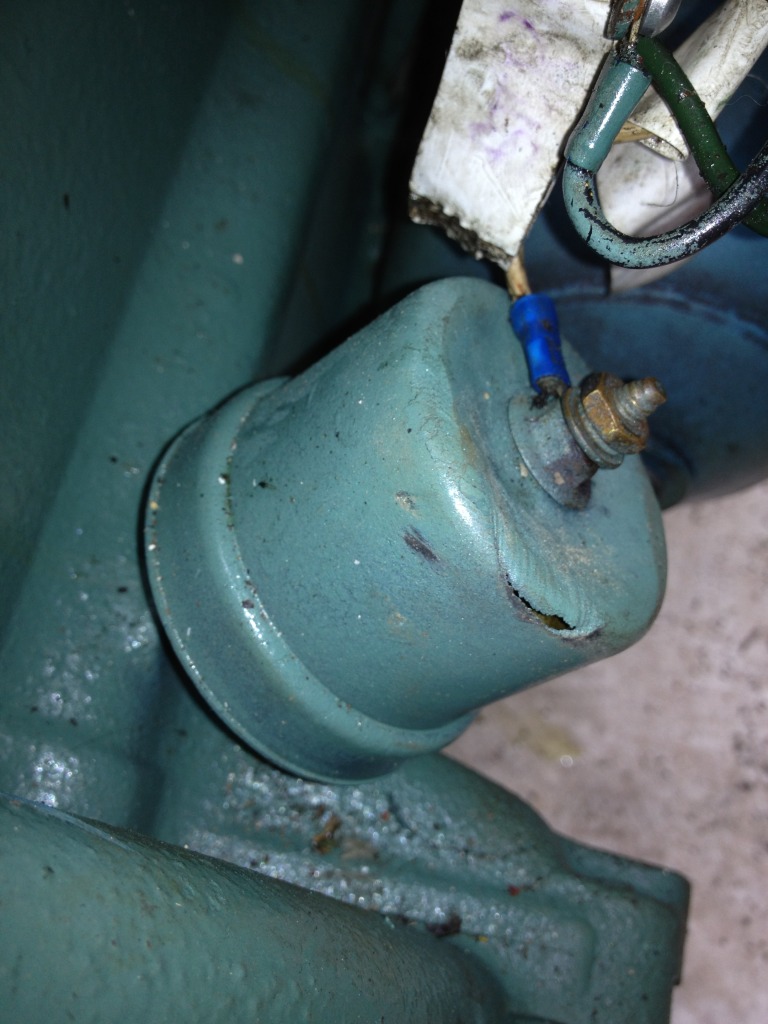 Also I am trying to source the senders and I was able to nail down some part ##s.
I have extensive literature hardcopies.
Having a hard time actually finding the parts though.
Sending unit(last pic) Chrysler #3619101
Oil switch, I have two numbers what's the diff?
Nissan number 2524089902 P/L
or 2524089900 U/S

Any ideas?
Thanks
Stefan[/img]
All times are UTC-07:00
Page 1 of 2
Powered by phpBB® Forum Software © phpBB Limited
https://www.phpbb.com/