Hello
I have a LD28 with a leak from the injector pump rear. I believe it is from the distributor head, I see the fuel weeping from between the aluminum body of the pump and the steel part with the 6 lines connected.

From reading this post, that's where I read "distributor head o-ring leak" and it seems to be what I have.

I can access the pump from the bottom and the top, and if I pull the engine mount and the oil filter, I can access the straight screws that hold the head on. (the engine is in a willys wagon with the fenders off, so access is a lot easier than in the maxima.)

My question is this, If I pull all the lines, and the head, will a bunch of parts fall out like balls, springs, what have you? Can I take this part off, replace the o-ring and put it back on?

Anybody who has experience with this who can indicate what I might be in for? Thanks. --Karl
59 willys wagon, ld28 powered
Top

I have not done IP work and don't recall if anybody has answered your question here. But:

Here are two links. The VW Bosch is very similar. I'm not sure if this is the same stuff I viewed a couple years ago - if so, take note of all the caveats because that was a Q&D rebuild. Google "Bosch injector pump rebuild" and go down the list. I'm sure there are more good ones.

I strongly advise all to save anything they find and value onto their own PC's because the internet is a constantly changing place and what's here today is often gone tomorrow.

The docs I viewed years ago were in French.
82 Maxima wagon
Top

Hey Great! That link with all the pictures is excellent, thanks so much.

Looks like it's a bad idea to take the pump apart in the vehicle. But with that guide for the Bosch unit, and a seal kit, I'll have no problem doing it on the bench.

Now... Any body know a good source for seals and gaskets?

Involves loosening by equal amounts (1/4 turn at a time) the dist. head clamping screws until the dist. head slides out far enough to carefully pry/cut the old o-ring out. Maybe 1/4 inch? This way you avoid opening up the IP. Do not nick the sealing surfaces.

Next, remove two opposite dist. head clamping screws (there are four), and wrap clean duct tape around the circumference of the dist. head (to avoid getting rust and grime from the dist head outer surface embedded in the new o-ring).

Roll new o-ring over the end of the dist. head and into the sealing slot you opened up. Now the new o-ring will still be hung up on the two opposing screws, so install the two screws you previously removed enough to be able to remove the two that are keeping the o-ring from completely seating. When withdrawing the screws, keep the screw threads from nicking the o-ring by holding the o-ring out of the way with a hook pick or similar.

Now o-ring should be completely seated in the groove, reinstall the other two screws, and screw all four in equal 1/4 turn increments until they are home. Do not overtorque (Note: spec calls 8-9 ft-lb), you are screwing into aluminum, and the rubber o-ring is the sealing material.

IMPORTANT: Do not let the dist. head get cocked to one side. The fueling plunger shaft runs up in the dist head with tight tolerances, and you don't want to nick, bend, or snap it.

Here is an exploded dwg:
http://postimage.org/image/rmdi5o9w/

Extra credit: If the dist. head clamping screws on your IP are slot-head (as shown in the exploded dwg.), make life easier and replace them w/ allen-head.

A local diesel fuel injection shop was able to supply me an appropriate Bosch VE IP gasket/seal kit. $20-40-ish? They could probably get just the one o-ring, but on mine I found other leaks. Look in your neighborhood for a trucker injection shop. Give them the Bosch (Kiki) number stamped on the side of the pump.
Top

That will work, and your directions are very clear. I'll do this as soon as I get an o-ring and post my results. Thanks! --Karl
59 willys wagon, ld28 powered
Top

Probably isn't necessary when parting the halves of the IP to this small amount for replacing the dist. head o-ring, but:::

Some like to temporarily substitute a longer bolt for the timing hole bolt (center of dist. head, in the middle of all the injector line check valve outlets). As you are loosening the dist. head clamping screws and parting the dist. head from the IP body, you finger-tighten the longer bolt in the timing hole to keep the plunger from sliding out with the dist. head, preventing any movement by those pieces inside the IP. DON'T FORGET!::: Gotta be careful when putting it back together! Don't forget to incrementally loosen that bolt!

I just received a seal kit, and took out the o-ring. For future reference and for anybody who doesn't want to buy the whole kit, it's 2.5mm CS x 60mm ID green Viton.

I sorta tried to do this on my Toyota Camry diesel a couple of years ago.

While it may be possible, it sure wasn't as easy for me as the directions made it sound. That IP is *still* apart!

[later]
Read what Charles has to say.
Regards,
Al S.

It worked well for me. Leak free for 500 miles so far.

Some reported that they used drinking straw protectors for the threads of the screws that the o-ring went over (that you take out after putting the other 2 in) I just used a seal hook to lift the o-ring away from the threads while pulling each screw.

I think the r&r of the hard lines, the engine mount, and the idle up unit was a lot more tedious work than the o-ring change.

Glad you were able to get it done in the vehicle, without having the pump vertical.

Now, imagine doing that in a Maxima. The space available to access the back of the IP is insane.
Regards,
Al S.

IP innards won't fall out and roll around if you are only pulling the dist. head just far enough to access the o-ring. Agree on the access to the IP in the Maxima, though!
Top

Glad it worked out for you!
Top

See this thread for pictures of a brand-new IP I sold years ago.

The only wired thing on the LD28 IP that goes into a large nut is the Stop Solenoid, and it's safe to remove. Just make damned certain that it's spotlessly clean all around it before unscrewing it, because any debris will fall directly into a place you don't want debris. It's sealed by a copper washer; round up a replacement beforehand. 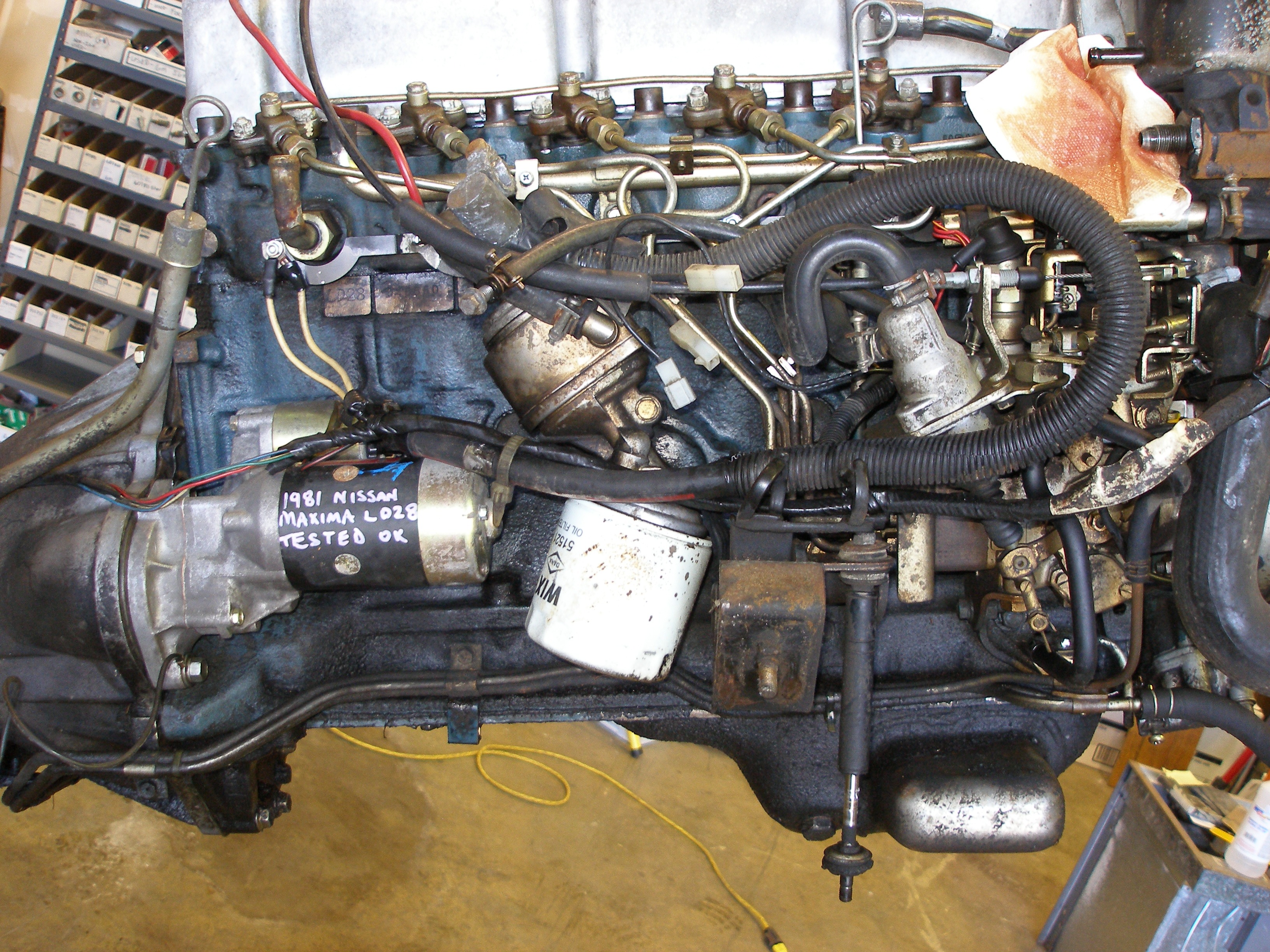 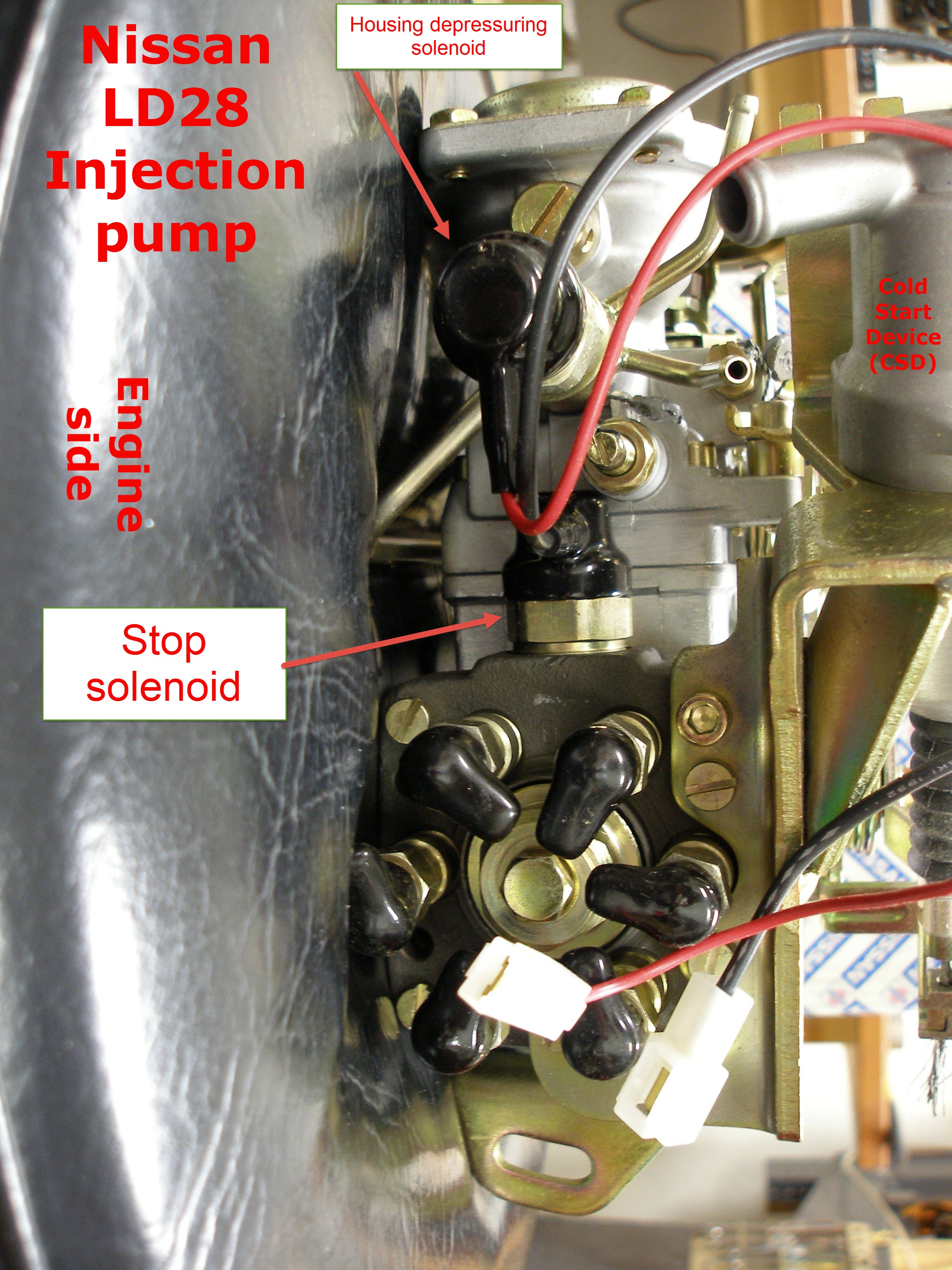