Greeting folks,
I am back in the groove after faltering on my project. The time has shot by and there is a problem with the fact that now that I am retired there is no more overtime $$$....But I am back at getting the SD22 RE Fired up. Getting it ready for the transplant into the Sonoma, I split the transmission from the engine and found that during the 20 years of storage the clutch disk material had grown fast to the flywheel.....Once apart it was apparent that the clutch disk was shot. After separating the clutch disk from the flywheel I sanded the flywheel to remove the clutch residue. Inspection found that the flywheel will not have to be resurfaced. I ordered a new clutch kit along with a slave cyl and water pump. I am looking forward to being back on track. I am going to try to post some pics of the transformation just in case anyone may be interested.....
Have fun,
buckshot
Take time to smell the roses before you end up under them ! ! !

It has been said, "pictures or it never happened" looking foreword to seeing your effort.
Top

The Pictures ended up out of alignment being the last pic was the first entered ? ? ? The first one is removing all the green stuff to show some white paint...The rest are cleaning up the engine and transmission in prep for some brighter paint....There will soon be some pics of the engine mock up sitting in the frame. 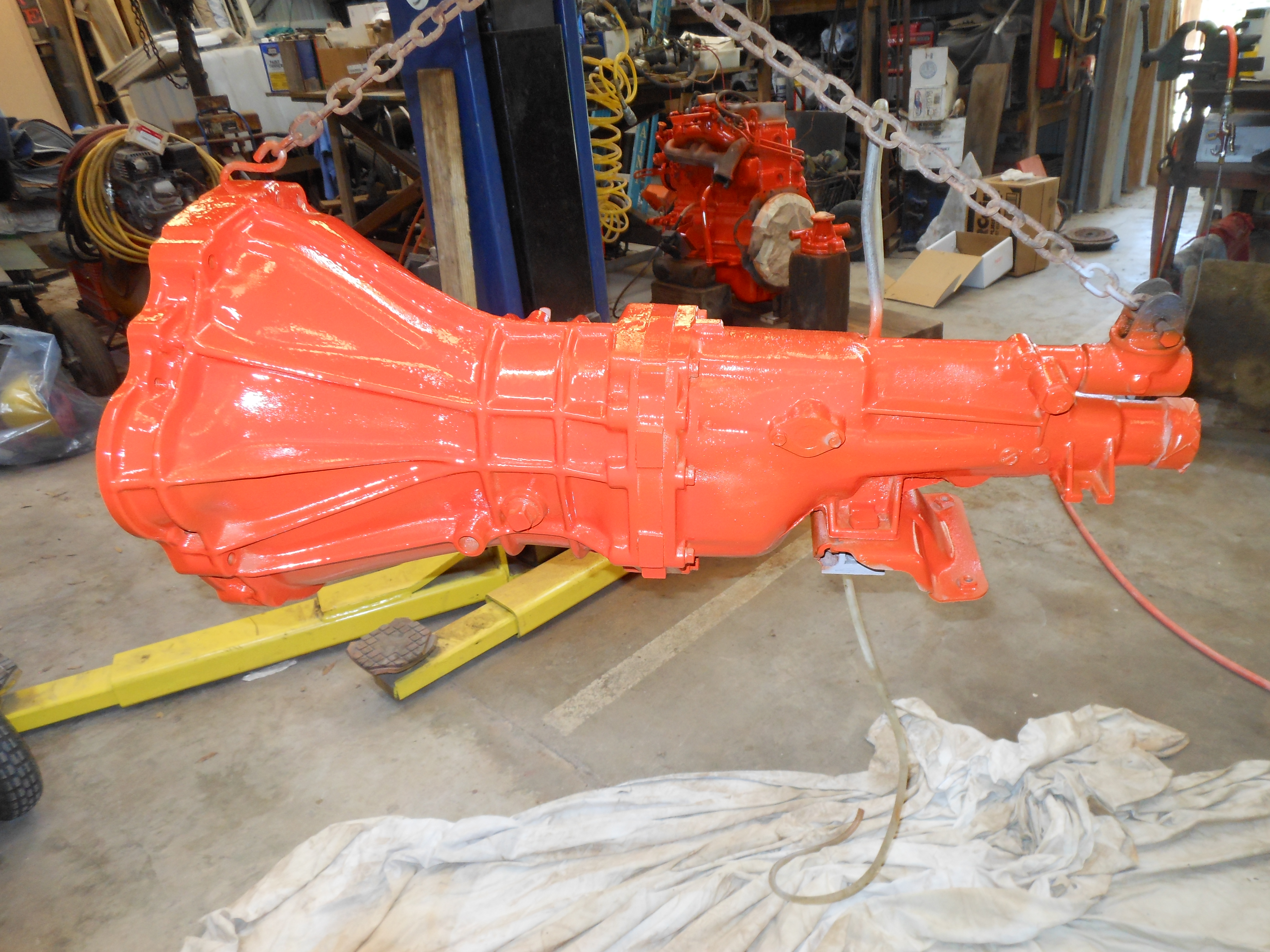 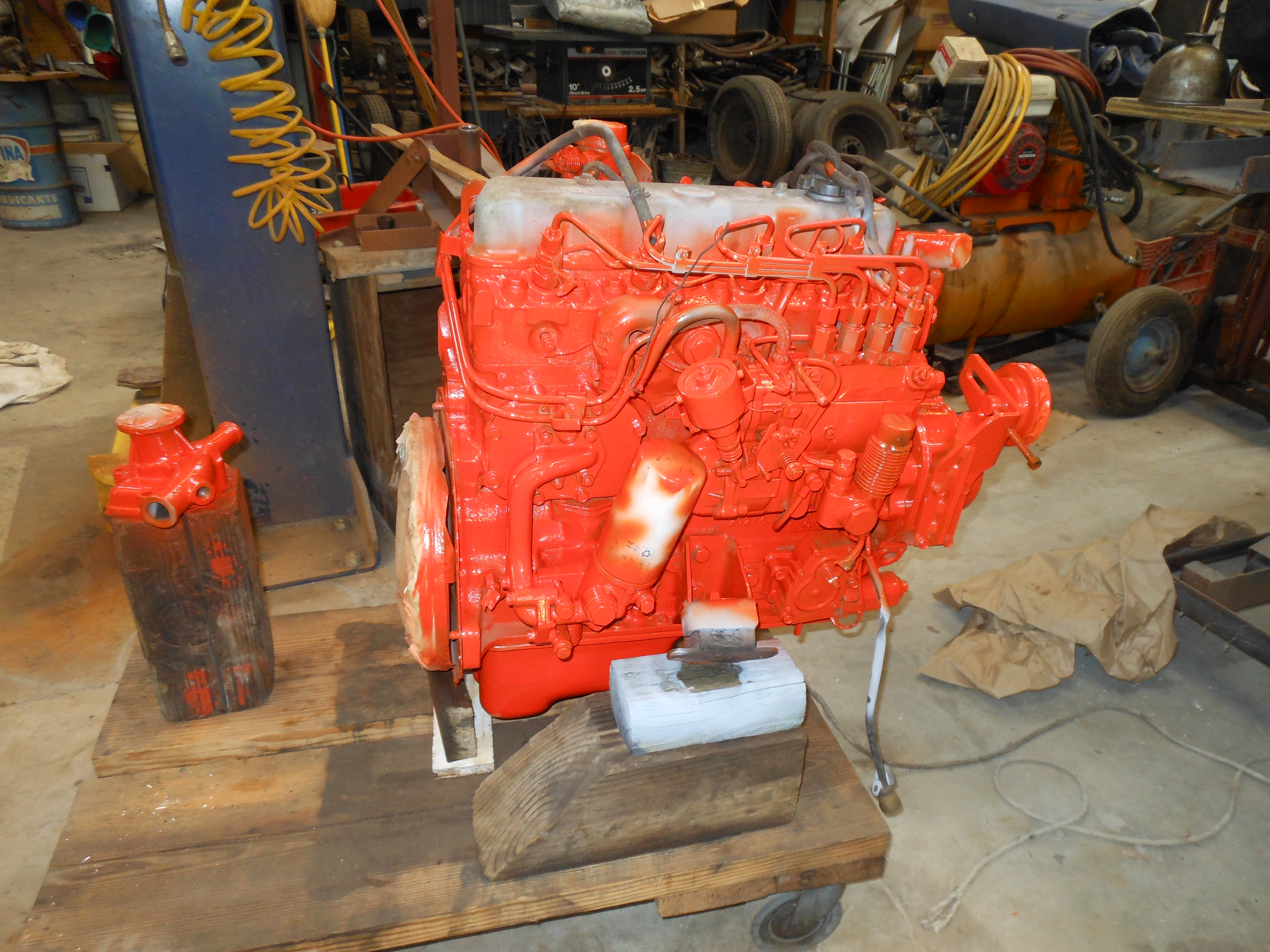 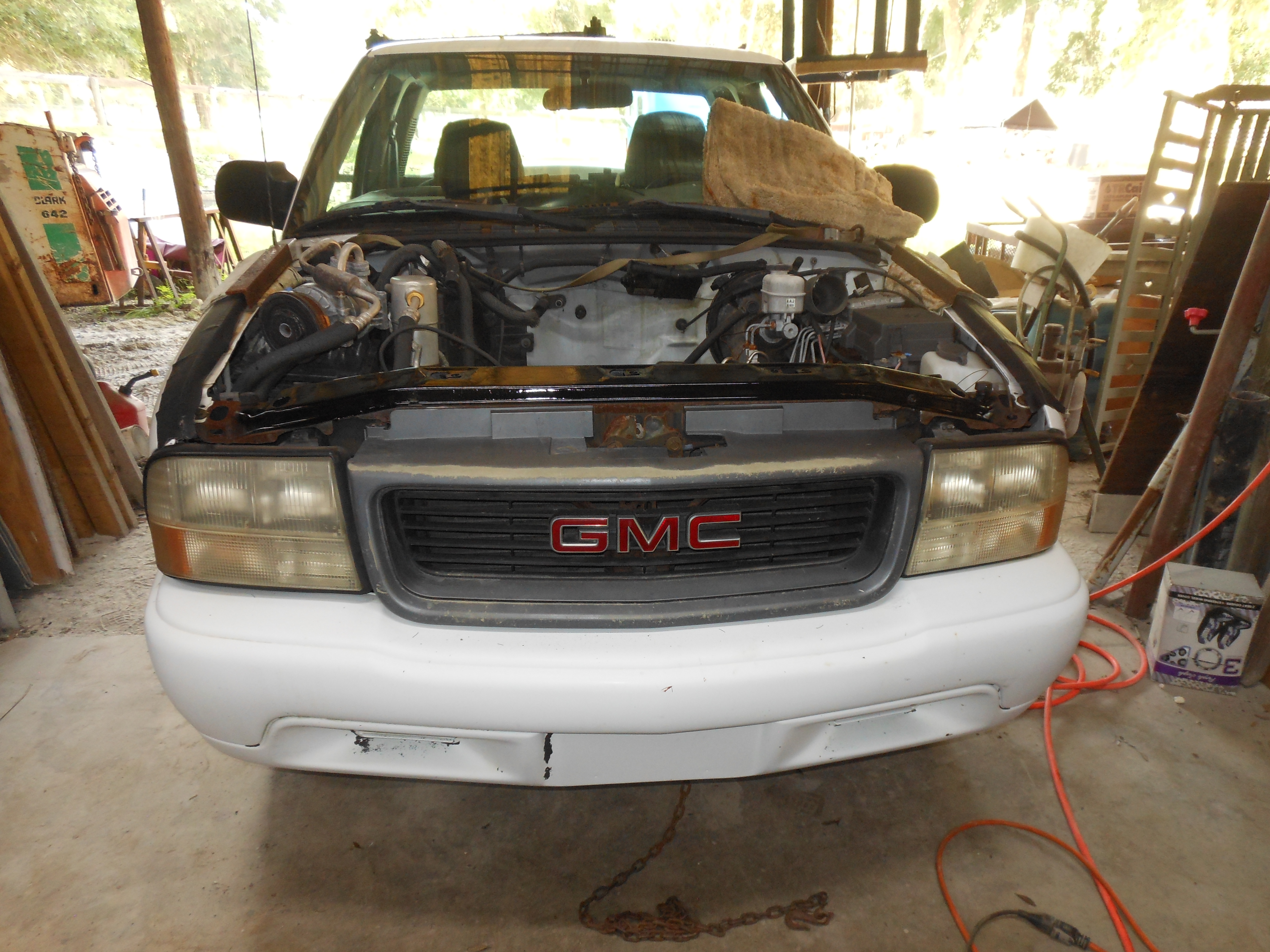 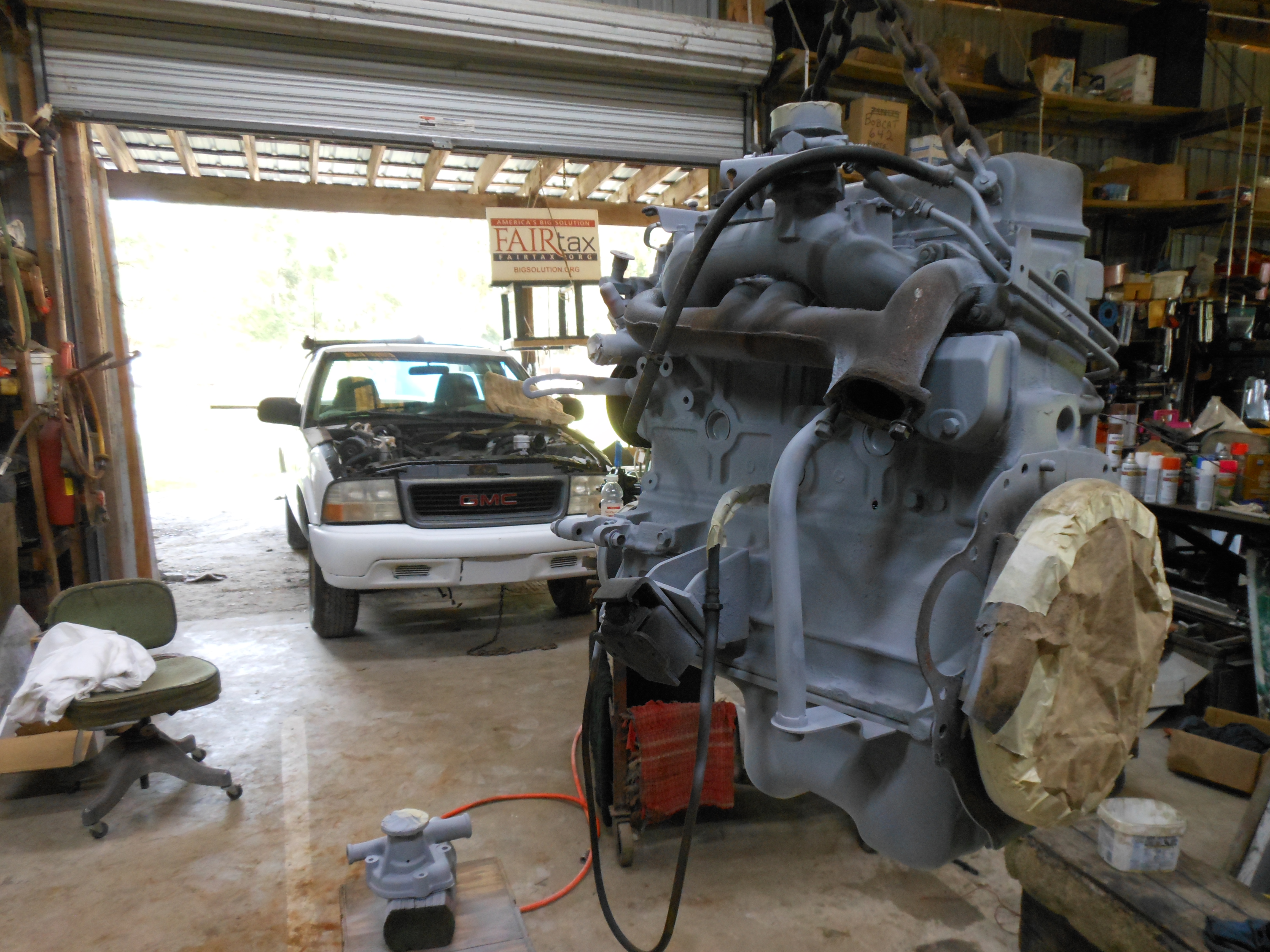 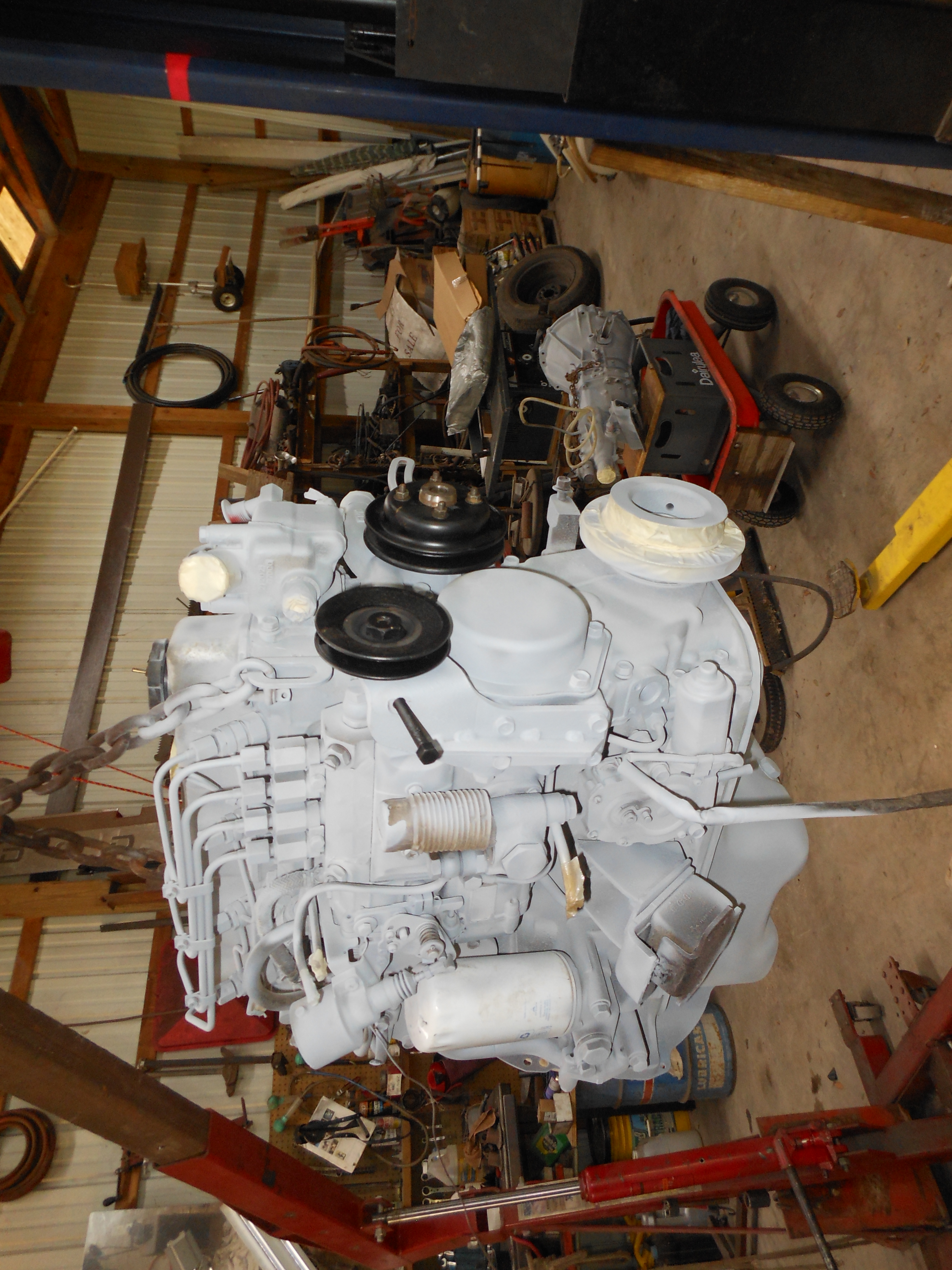 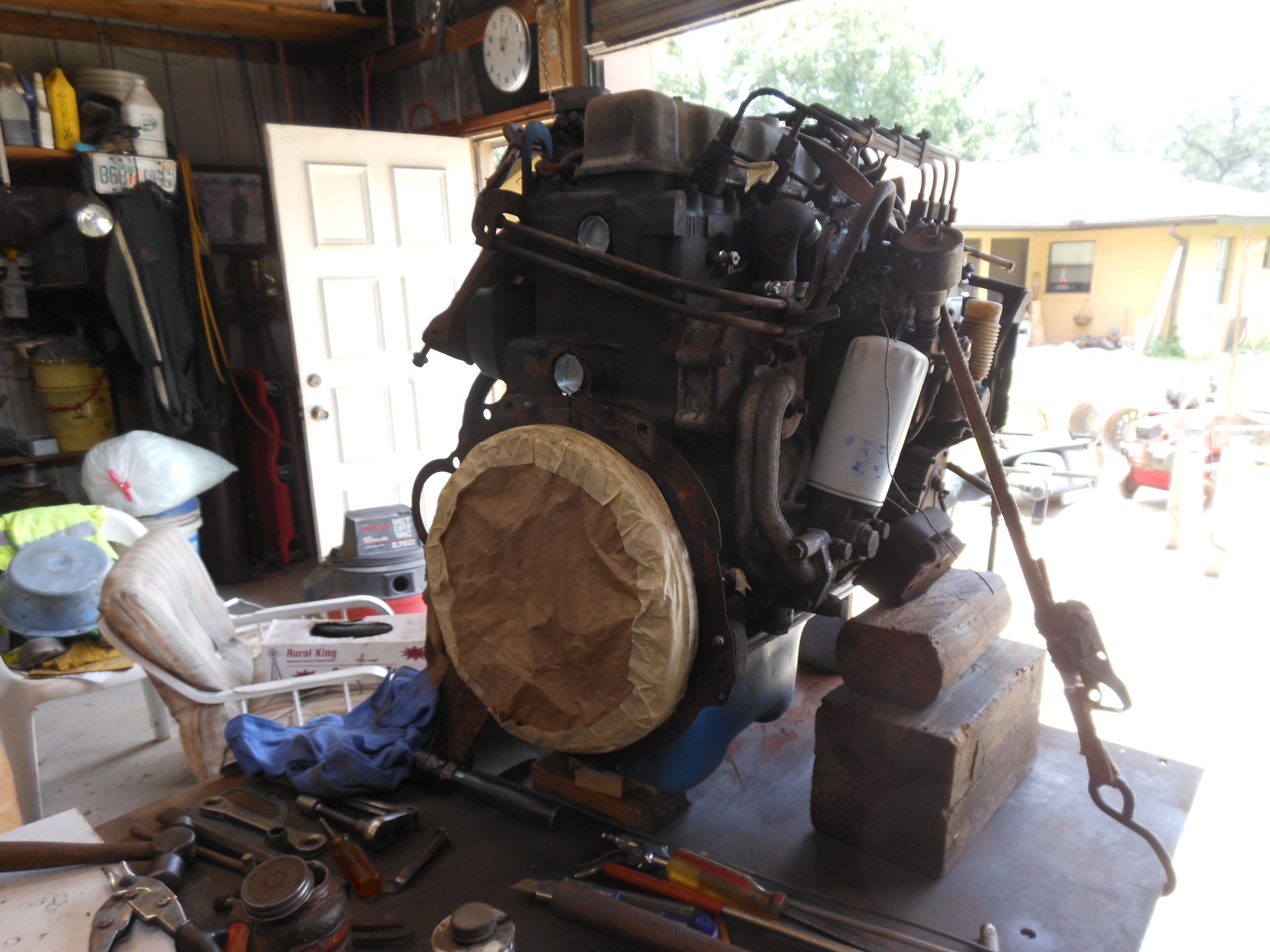 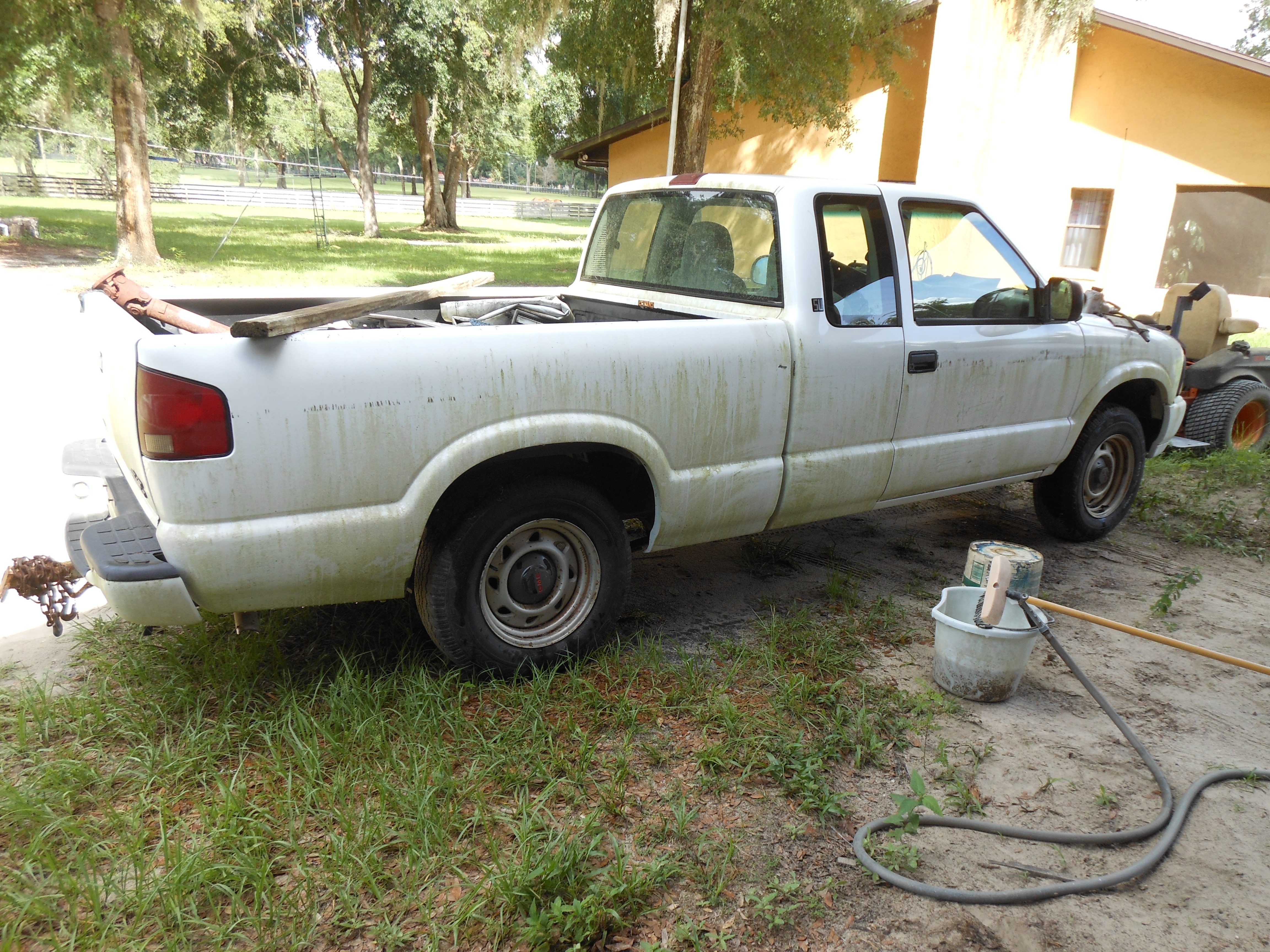 Well, from what I can see my idea of putting an SD22 into a Sonoma has no interest even with some starter pics.......Here are some additional pics.... 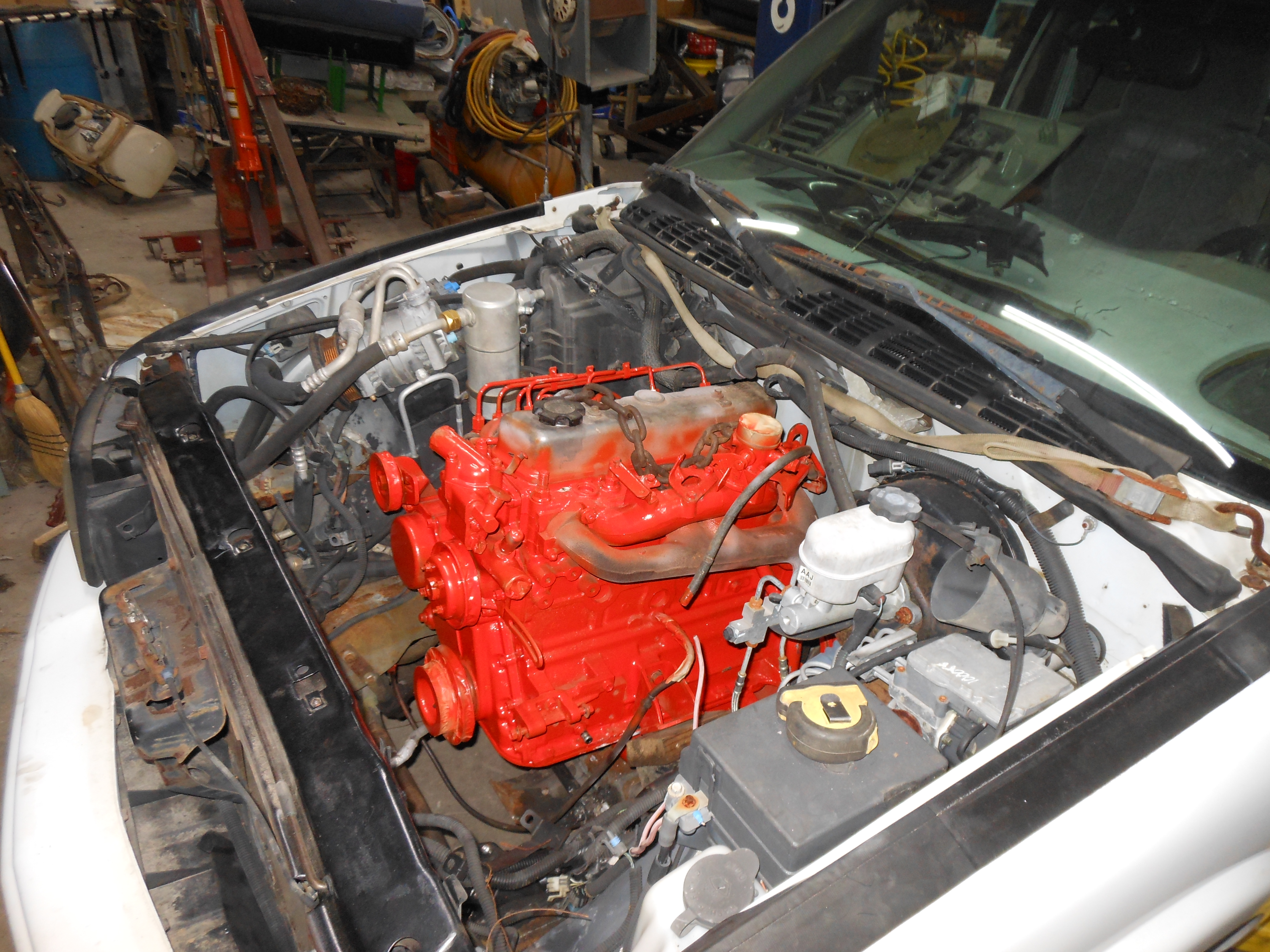 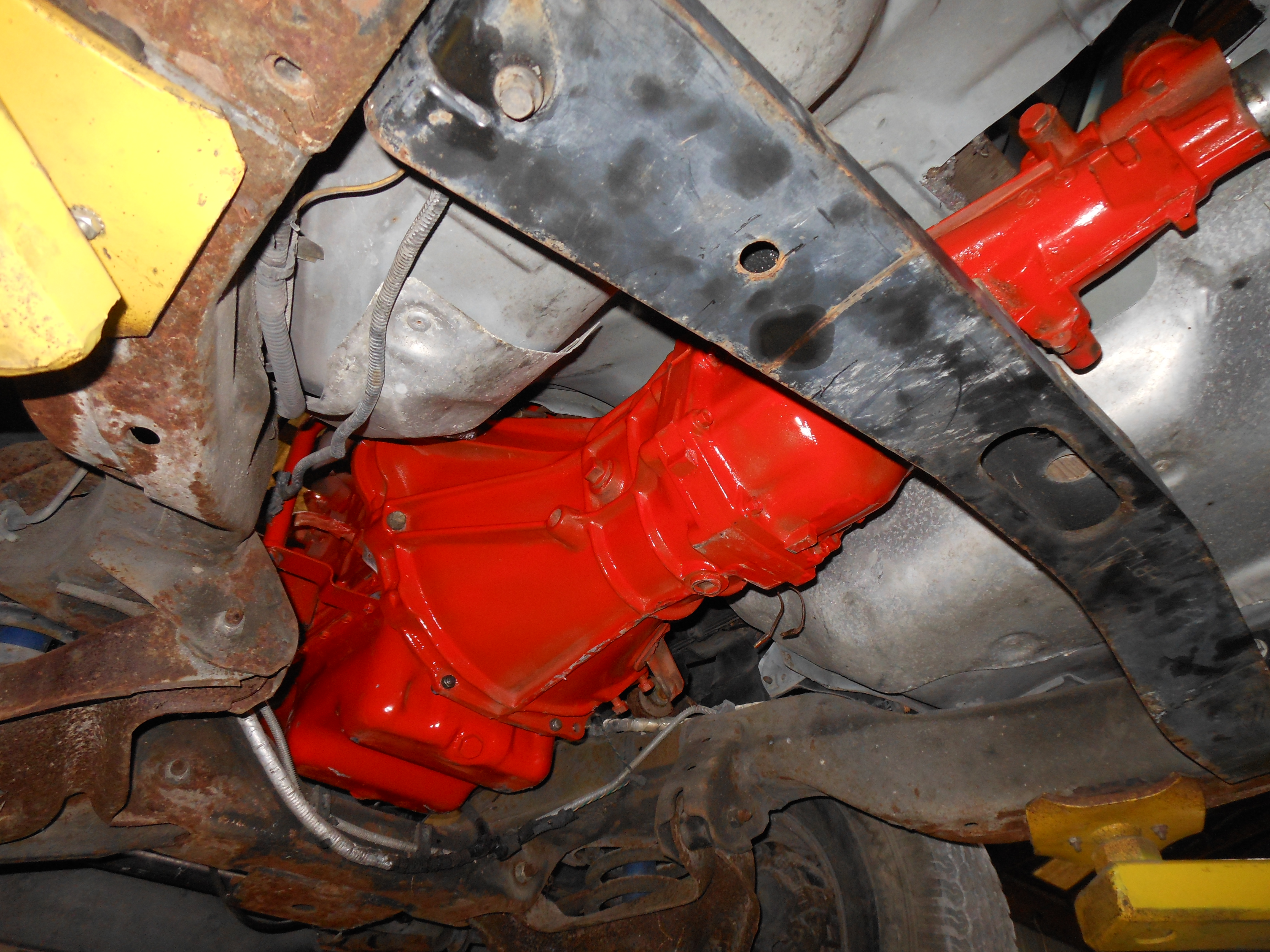 "Well, from what I can see my idea of putting an SD22 into a Sonoma has no interest even with some starter pics.......Here are some additional pics...."

Not true, keep up the good work. looking foreword to seeing more.
Top

I am looking for pictures of the red customized diesel engine on the face of the web next to the blue engine.....I had pictures of this showing a turbo and now I cant find them....I had the pictures to look at in
order to mock up my turbo...Can any point me to this engine and it's pictures ? ? ?
Have fun,
buckshot
Take time to smell the roses before you end up under them ! ! !

Here is the thread your looking for.
http://nissandiesel.dyndns.org/viewtopi ... 75500#3659
You are planning to turbocharge your engine, there are a lot of ways to accomplish that, I have done it a few different ways but the easiest is to make a "U" pipe coming off the stock exhaust outlet and pipe it to the turbocharger located right over the alternator. I recently helped my friend turbocharge his SD22 diesel engine in his 720, I was not impressed, it didn't seem to have much more power than before but he says it doesn't lose speed on the hills like it used to.
I would not have been happy with it but I am spoiled, my Datsun 521 kingcab SD25 turbodiesel is awesome, it's my favorite vehicle to drive.
Here is another one I made, same idea, I put all these setups in my 720 to see if they worked properly with a 2001 VW Passat turbocharger, they worked fine with a lot of power, but they were not like my 521. Here are some more photos, I am posting them to give you ideas. This is the log manifold I made for my friend Thank you Sir for the pics. I wish I would have seen them before I built my stainless steel manifold. Yes, I like the stainless but it came at a cost of more than I would like to admit. Did you use an after cooler? I am going to try to plumb one in to my system. I don't know which type of air cleaner I will use but it may be one of the cone types that I can clean and re oil. I even thought of using an old oil bath ? ? ? I will post some pics of the manifold and turbo as soon as I get my camera battery charged up. Is that PVC pipe that you used on the intake ? Thanks again
Have fun,
buckshot
Take time to smell the roses before you end up under them ! ! !

I put an inter-cooler on my 720 when I could not get it to run properly as it was running too hot, well it was not piped properly and was getting too much fuel, since getting that turbocharged engine and realizing I was never going to be able to drive it the way the guy had it piped, I figured it out and have turbocharged both my SD25 engines without issues, my 521 kingcab turbodiesel has no cooler and it runs just fine without one, but I watched the EGTs very closely for a long time before figuring out that I only need to watch them when driving up a long incline, sometimes I have to back off the pedal when going up a hill at 75mph, normal freeway driving I rarely see the EGTs above 900 degrees.
The 720 EGTs are the same, I rarely see over a 1000 degrees but I don't really drive that truck anywhere anymore, and i have never taken it on a trip since turbocharging the 521 kingcab, I would rather drive that one on a trip over anything I have except the Datsun Roadster.
I helped turbocharge my friends 720 with an SD22 diesel, I was not impressed, maybe it is the turbocharger, we used the 2001 VW Passat turbocharger, maybe it is not the turbocharger for the SD22, it works alright in my 720 with an SD25 diesel engine, but it is nothing compared to my 521 kingcab with an SD25 that has that 1985 Subaru XT turbocharger on it, that truck/engine is awesome, if I drive anything on a trip it will be that truck, it's amazing what that turbocharger did to that engine.
I am using the stock 720 air filter housing on both my turbocharged engines, if you want to see what I did and how I turbocharged both my rigs just read both my threads in the links below on this forum, they also show all my failures.
http://nissandiesel.dyndns.org/viewtopic.php?f=5&t=3380
http://nissandiesel.dyndns.org/viewtopic.php?f=5&t=3474

I used ABS pipe at first, but since then I upgraded using turbo hose fittings and aluminum tubing. OK, folks,
I am back at it again....I have my turbo about done except for some oil line fittings that I should be getting later today...I am building a dash gauge cluster for the Sonoma and am going to try to include a tachometer...I have a call in to Stewart Warner to see what kind of tach they may have....Have any of you folks had any experience with finding a 3 1/8 inch tack that I can use on the SD 22 ? ? ? I dont know or remember anything about a mechanical tach drive so I believe I will have to use some kind of electrically operated one... I will try to take some pics of the intake and turbo I put together for the build....
Have fun
buckshot
Take time to smell the roses before you end up under them ! ! !

There is no mechanical tach drive on the SD-22. Wayno glued some magnets onto the damper pulley (I think) and used that to give pulses to an analog tach. He should chime in and give you the details as I'm not sure what the magnets were glued to.

I have tachometers for both my SD25 diesel engines, I used the ISSPRO diesel tachometer(0-4000rpms) on my 521 kingcab turbodiesel, it came with the gauge, wiring, sensor, and magnets that I glued to the front crank pulley with the glue supplied, I searched on ebay for "diesel tachometer ISSPRO" and came up with 4 results but none of them appeared to come complete with everything, the place I bought mine is ISSPRO Inc which is near me in Portland OR, mine was a black gauge face, white markings, orange needle.

I like this ISSPRO gauge the best as it has never failed me. 
My 1980 Datsun 720 turbodiesel has a "Tinytach", the first one I bought worked great(sold that truck), it acted normally in all functions, speeding up/slowing down/idle, my second Tinytach did not work properly which is very annoying, when I let off the pedal it goes to total hours rather than dropping in RPMs, when I give it pedal it comes right back and works again, I contacted them about the issue and they sent me another pickup sensor and it didn't fix the issue, I sent another message and they never responded again, I will never buy another one as they didn't fix the issue.
I know the voices are not real,
but they have some really good ideas.
Top

I have just ordered an Autometer Old Time tach #1478 from Summet which matches the speedometer I already had....To this I added an Autometer diesel tach adaptor. I also have a bunch of stewart warner gauges to add to the mix.....The turbo is done except for my getting the pressure hose and the drain hose.... ....I am now in the process of pulling the Sonoma dash in order to plant the new gauges into it....more pics to follow..... .....Just remembered these pics were also on the camera....
Take time to smell the roses before you end up under them ! ! !

Road rage can be hazardous to your health ! ! !
Top
Post Reply
20 posts