Thanks for the tips.

I'm not using Park since I had this problem (only Neutral and handbrake) and so far everything is OK. No more issues. However, when I'll have some time I will take a look at that switch.
'86 Nissan Laurel LD28 AT
Top

I just changed the oil ( Mobil1 10w40 Turbo Diesel) and oil filter.
Next is a fuel filter change, for the first time since I have the car.
Small problem: the previous owner has added another fuel filter, so I have 2, but the problem is that I don't have the original fuel filter and I'm not sure if the assy is the original one..probably I have to remove the filter and take it to a shop, maybe the guys can identify it.
Even if the assy is the original one, the problem is that I don't have that sensor going into the bottom of the original filter ( I have a new original filter).
No problems with the other filter, is a common filter around here.

Apart from this, the car runs really well, it still smokes but I can live with that for now.
The transmission still has its problems but I've learned how to drive it like this.
One issue what I'm 100% convinced about It is never downshifting from 3rd to 2nd when slowing down to about 15-20 miles/h. If I push the gas a little harder in this situation it jump out of gear for a second then goes back into 2nd.

Ok, so yesterday I did a drain&fill by disconnecting the driver's side radiator line. I've only used ~3 quarts.
I was astonished: the oil which came out was really really black, just like the used engine oil. Not good at all.
Any difference now? Yes, smoother gear changes and I noticed that now SOMETIMES it downshifts from 3rd to 2nd when I slow down.
As soon as possible I will buy at least 10 quarts of ATF and change all the oil. If I will be able to get a new pan gasket I will remove the pan and clean it.
I decided not to go no any repair shop anymore, they have no knowledge about ATs and instead of paying them for shity work I'll better do it myself.
The info found here is priceless.
'86 Nissan Laurel LD28 AT
Top

Good tip, I remember that my father used to do that some time ago.
'86 Nissan Laurel LD28 AT
Top

You can do an (almost) ATF powerflush. Drain the tranny again, then fill, disconnect the cooler lines, pour your fresh ATF into a larger container, put the suction hose into that, put the outflow hose into a suitable drain bucket, run the car until the outflow runs clean.
Top

I've adjusted the valves this weekend and also installed the new thermostat.
The smoke problem got better, it still smokes especially when going uphill but much less that before.
The thermostat is a 82 degree celsius one, the short type. It keeps the coolant indicator almost at the middle of the gauge and at 3/4 when going uphill.
I think I'll have to check the glow plugs. The engine starts easily when cold, but I have to crank it a bit when hot. I noticed that the glow plug light on the dash turns off too early, I have to wait 3-4 seconds after that to hear that click from the engine bay before I start cranking. Also, when the engine is hot that light turns off immediately after turning the key.

LE I've read a few threads about the coolant temperature.
For my car I have a similar temperature gauge as on the maxima. So the indicator sits a little under the middle and it stays there during highway driving and also in the city. Only going uphill it goes up, like 3 mm under the last line under the red line. But I noticed that it stays there, is not going higher. Maybe this has something to do with the clutch fan that I've replaced recently. Maybe it is the gasser version? and that's why it allows the temperature to go higher?...I don't know.

And about that glowplug light from the dash: what I've meant is that it is not synchronized with that "click" from the under the hood. The light goes off before that click. Could it be because I have some dead glowplugs? I have to investigate this.
'86 Nissan Laurel LD28 AT
Top

My GP light acts the same. I believe most of the LD28 folks here also have that behavior. You just wait for the click. Warm starting is also a known issue. Do a Search on "warm starting" or something like that. I think many have just added a Burn-out Button (hold it too long, burn out your GP's); again, try Search, maybe read the LD28 FAQ.

Just to offer a suggestion here. My SD 25 has a very similar glow system on it with the "quick glow" and "after glow" feature. From what I can understand from the owners manual is that you are to start to crank the engine as soon as the light goes out. This way you are cranking while the plugs are still in the quick glow cycle allowing for the compressed air to get hotter faster and aid in starting. At least that is what it appeas.

kossak wrote:... installed the new thermostat.
The thermostat is a 82 degree celsius one, the short type.

You need to get the correct thermostat, the one with the disk on the extension on the bottom. That can help control hi temps, also will help speed engine warmup from cold.
http://nissandiesel.dyndns.org/viewtopi ... thermostat
Top

The thermostat I got looks like the one from the right: 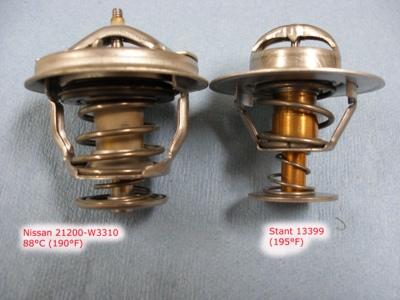 So it has that little extension at the bottom. I read on a topic that there was a 82 degree Celsius thermostat until 1981 for the LD28. When I ordered mine they only had one type.
And the engine warms up fast, 5 minutes of city driving in the morning are enough.

I drove today in the city a bit and the indicator always stays in the middle.
I honestly suspect the clutch fan for the indicator going up when driving uphill. I'm not sure that it is from a diesel engine. On a gasser it should lock up at higher temperatures?

And about the glowplugs: I tried to crank right after the light goes off but is not working that way.
And hot start is not really bad, I'm used to easy cold starts when one short key turn is enough. When hot I always crank it 2 times, 2 short key turns and it always starts.

I watched for smoke also today. I haven't noticed any big smoke cloud while driving in the city. A few times I've seen smoke it was rather gray than black.
I also tried to rev it up in neutral, up to 3000-3500 rpm and I had very little black smoke. If I'll get a camera, I will show you exactly how it looks like.
I'm pleased with the ways things turned out.
'86 Nissan Laurel LD28 AT
Top

Mine does not start all that well either when I try and start it the way they suggest in the owners manual. I always let them cycle to the "after glow" cycle and then crank. ( about 10 more seconds after the light goes out) It starts much better that way. I just think that was the reason why the light goes out so soon.

Looks like you got the correct thermostat type. Sorry, when you described it earlier ("The thermostat is a 82 degree celsius one, the short type ") that made me think it was the wrong (more common) type, lacking the recirculation port block off disc.
Top

My fault, I wasn't clear enough

Before buying it I read the threads about the thermostats and I was a bit worried that I might get the wrong one.
I don't if this is a problem only for you there in the US..
A gasket came with the thermostat but that one wasn't for the LD28, probably it is compatible with other cars ( I remember that my father put a thermostat from a FIAT engine in his LD28 some years ago and it worked ok)
'86 Nissan Laurel LD28 AT
Top

Ok, last Friday I got the transmission oil. 15 liters of Castrol Dexron 3 oil.
So I disconected the driver's side radiator line and first I pumped out the existing oil first. Almost 2 liters came out ( a bit less than I expected...)
The oil looked like this: 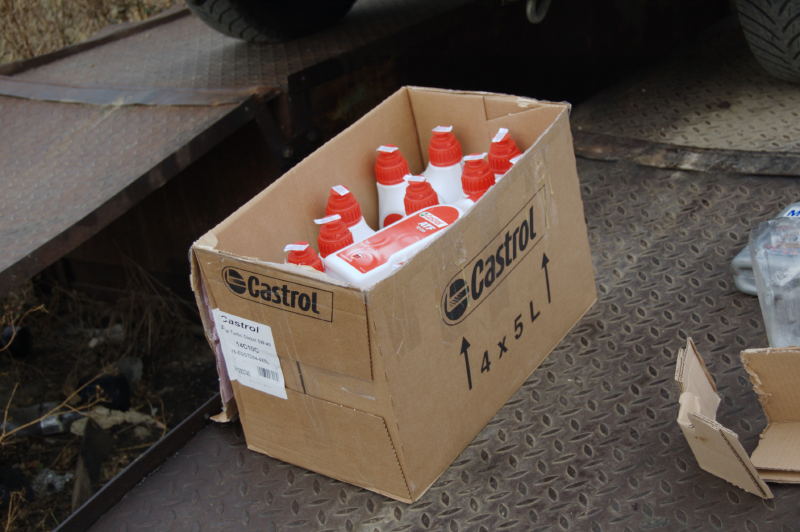 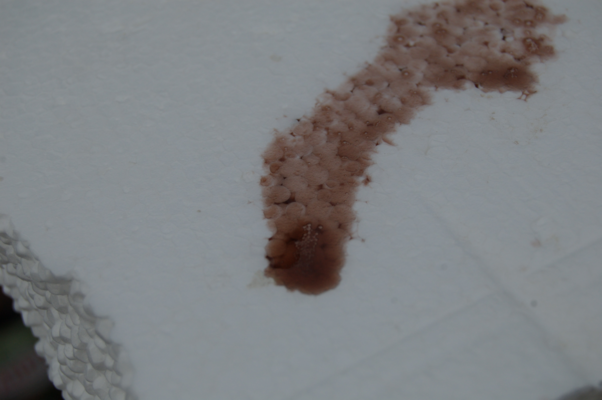 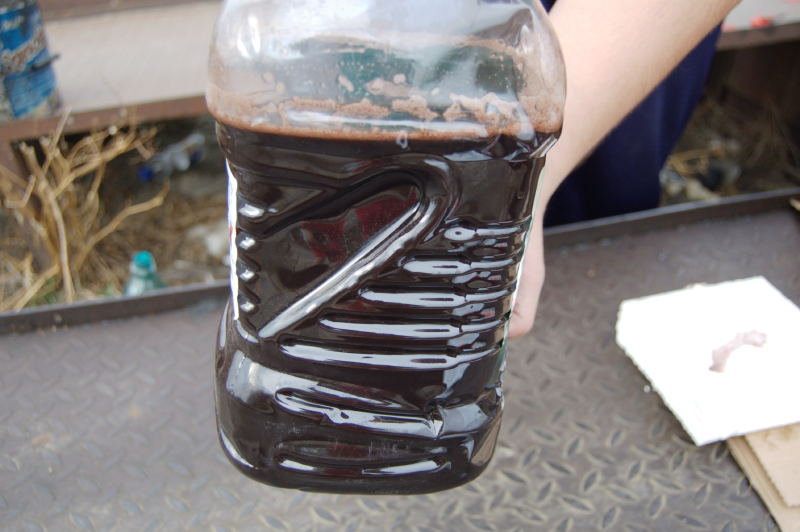 Remember that I made a drain&fill with 3 liters 2 weeks ago.

After using ~10 liters of oil I had clear oil coming out of the radiator line. 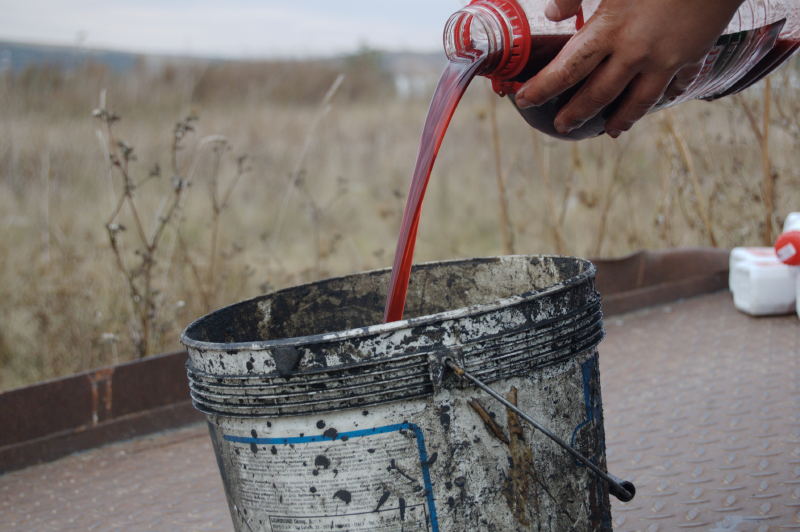 At the end I added 2 liters and I've connected back the line.

I took me less than one hour, so it was fast. 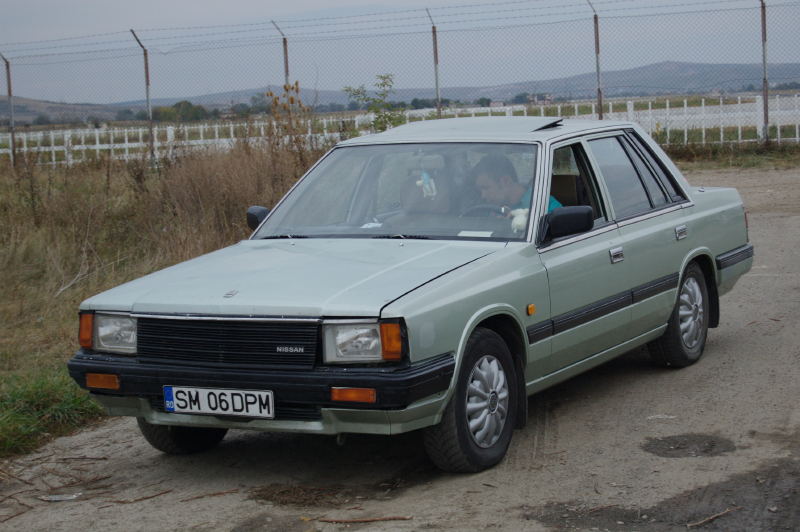 I checked the oil today and still looks good.

BUT. The results are not exactly what I've expected.
Shifts are smoother ( especially 2nd to 3rd)
1st to 2nd too, but NOT all the time. And is still not downshifting from 3rd to second when I slow down.
There is still that flare between 2nd and 3rd, it somehow got better but still exists. Luckily I got used to let the pedal a bit before it shifts, I never let it slip.
I think I have to drive to car like this.
I'm not yet decided about that Lucas fix. I'm afraid that it could do more damage than help.

So now that I have clean oil I have no other ideas, I have to live with this.

/later edit
It seems that I've found a guy with a Laurel from '81 (C31) with the LD28.
He told me that he already passed the one milion kilometers (620k miles) with the car!
I will meet him this weekend, I have to see that!
He's saying that he doesn't have problems with smoke..(he replaced the IP belt and that solved the smoke problem for him).
'86 Nissan Laurel LD28 AT
Top
Post Reply
66 posts