OK, I have a question about the DPC Module, it appears to be tied into everything, I know it is connected to the oil sender/sensor and the engine will not start unless there is oil pressure, well it appears to be connected to the alternator also and if the alternator is not charging it will not start either, I figured this out today because my alternator was not charging, I disconnected the IP control arm as I needed the engine to start, I played around with the alternator wiring, and the fusible link wiring, IP controller plug was cycled also, and I also tried another DPC Module but there was no difference, it would not charge, I had gave up and connected the old DPC Module and started looking for new power steering leaks again as I have an issue there and there was a loud pop like when the glow plugs finish warming up and that is when the alternator normally starts charging when it has been working/charging in the past, I got curious because this pop happened even after the engine had been running for several minutes, it may have been a minute after I had finished plugging in the old DPC Module, anyway I walked around the truck and looked at the volt gauge and it was charging for the first time in a quite a while as the IP controller arm has been removed for quite a while also, so I must have done something that changed something, does anyone on here have an idea?
Also my oil sensor line has been disconnected for a few years now as I have the same issue when it is connected, it will not start when it is connected, any ideas as I have changed out the sensor/sender a couple times without positive results, any ideas why this is an issue?
I did hear the DPC Module buzzing when I connected the battery back up after changing out the turbocharger system, it buzzed a few times after connecting it even though the ignition was not on, changing it out to another one made no difference though.
I forgot to mention that after it started charging I connected the IP control arm back up to the IP and it works normally again, it starts and shuts down with the key.
If anyone on here knows about this stuff could you help me understand it, the reason I have the oil gauge is because the engine will not start with the oil light wire connected unless I disconnect that wire from the sender/sensor, and I actually have 2 oil pressure gauges, the stock 720 electric type that shows low pressure all the time, and the mechanical one that shows lots of pressure(over 60psi when driving), that is likely a wire issue also.
Anyone on here know about this stuff?
I know the voices are not real,
but they have some really good ideas.
Top

So I have been messing with the turbochargers over the last month or so,
the last turbo I installed was too high and made a lot of noise, so I
bought a turbocharger on ebay like the one that was on it when I bought
the Volvo with the SD25 engine, but this one is not modified(larger
compressor vane), I got that one going and it is way quieter, I also
made a lower mount, it is better and will still make a lot of PSI when I
am going thru the gears but when I let off at 65mph and cruise at an
even speed it only makes around 8psi, it runs warmer(EGTs) than the 521
kingcab engine, but this injection pump is modified also to run richer. 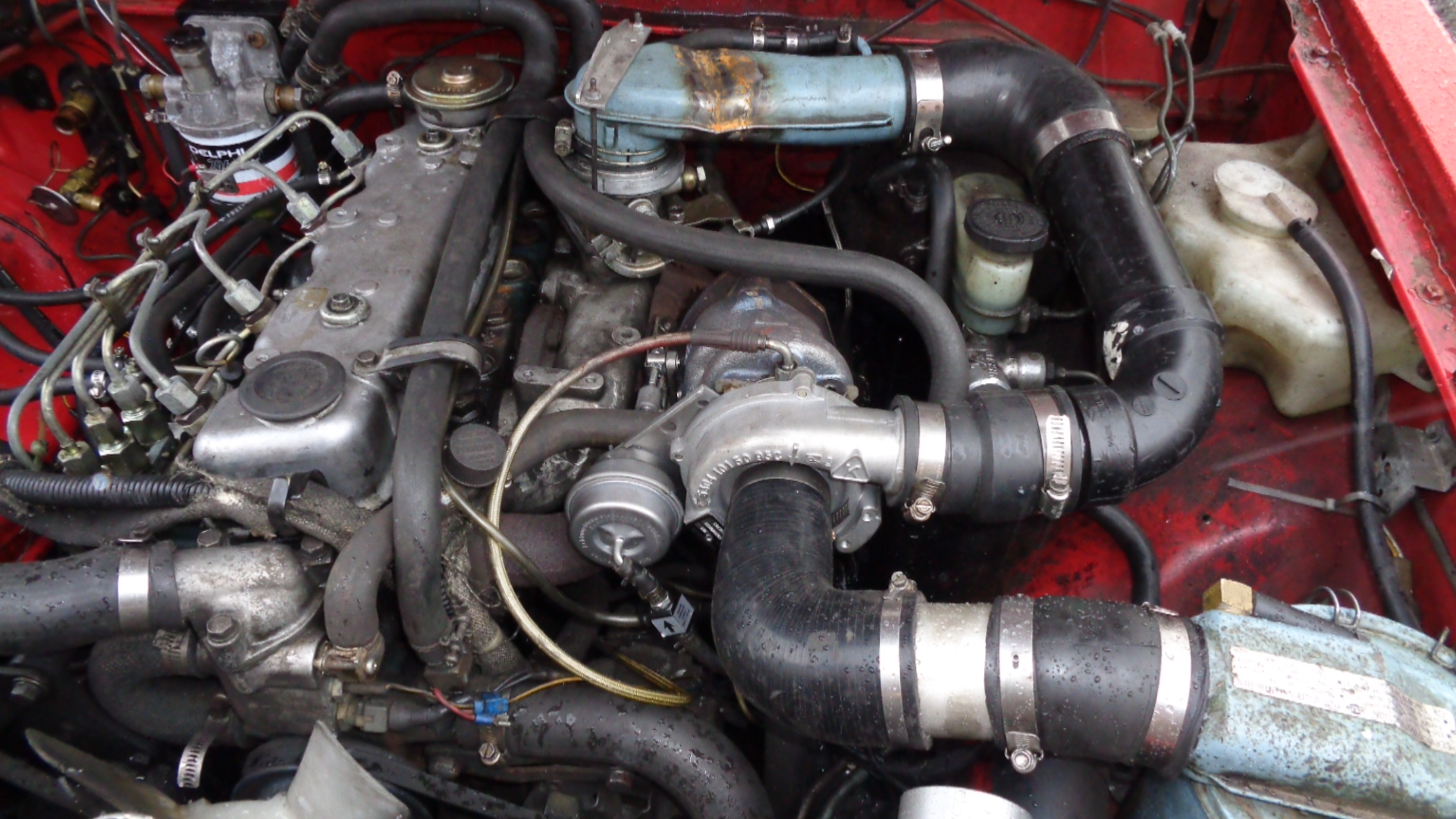 So I decided to try something new, I made my own turbo exhaust manifold, it's been called a log manifold on another forum, my welding is not pretty, but it will hold and likely will not leak, I am thinking about making another one a different way and I am sure it will be nicer. 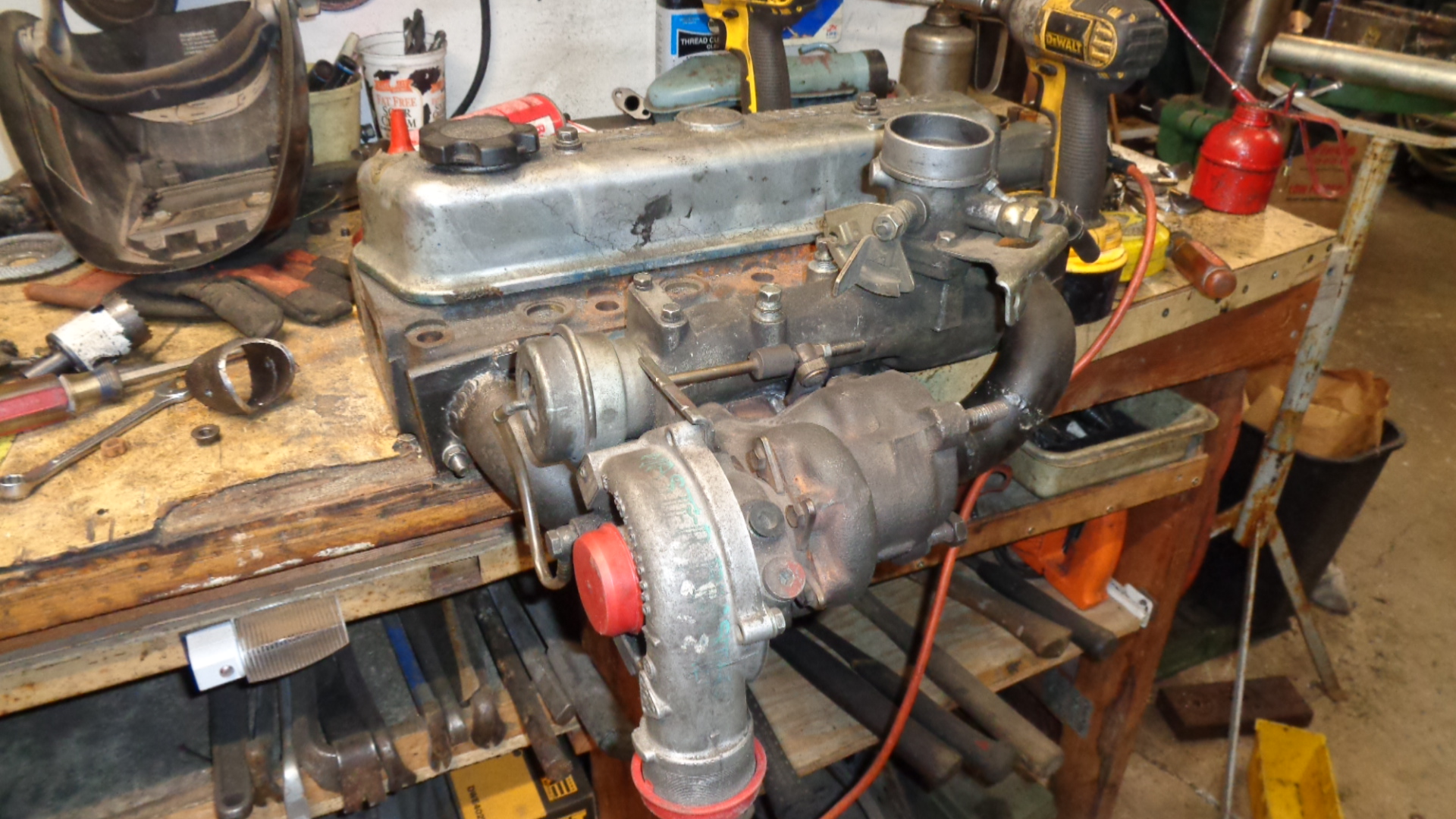 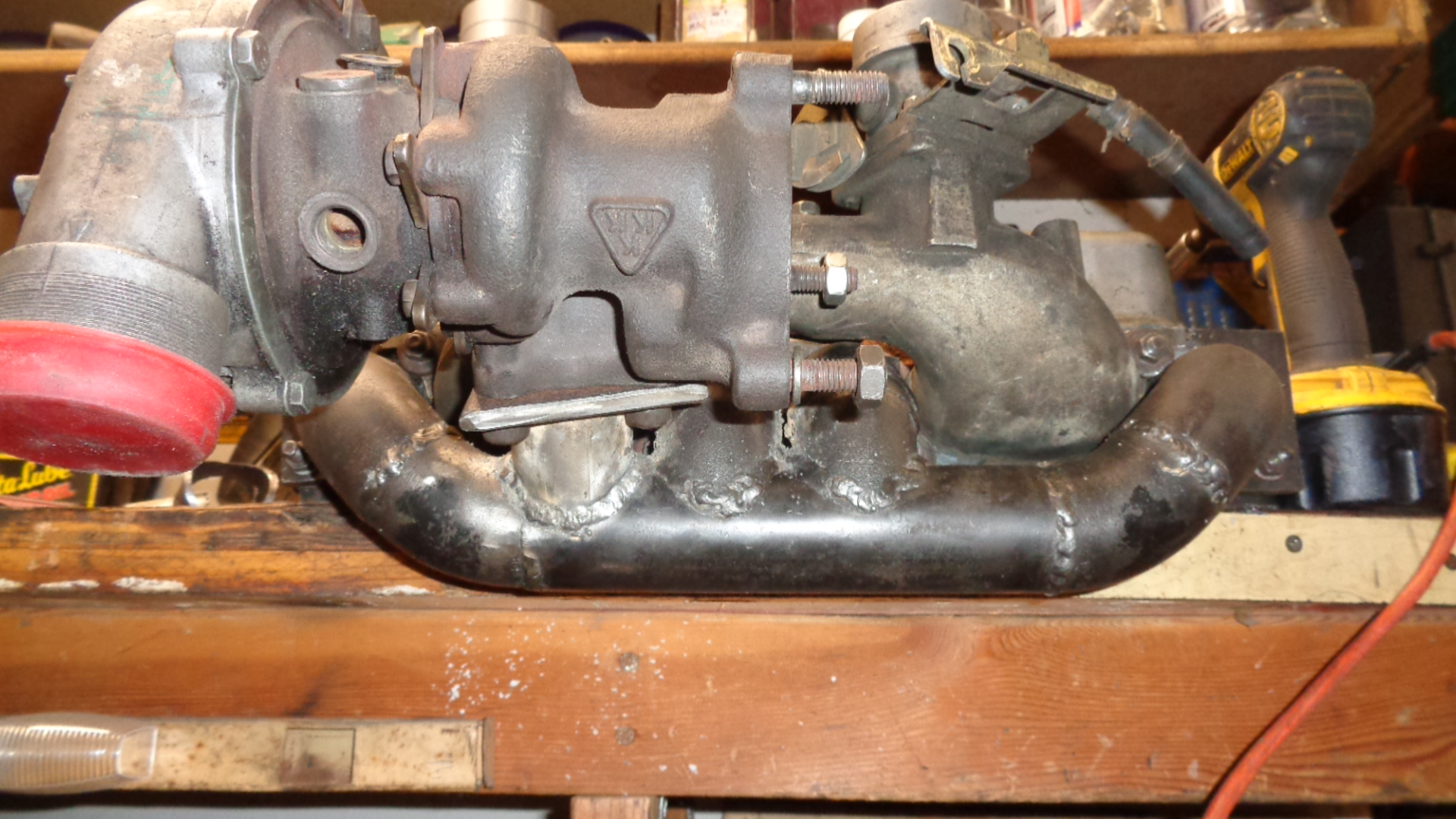 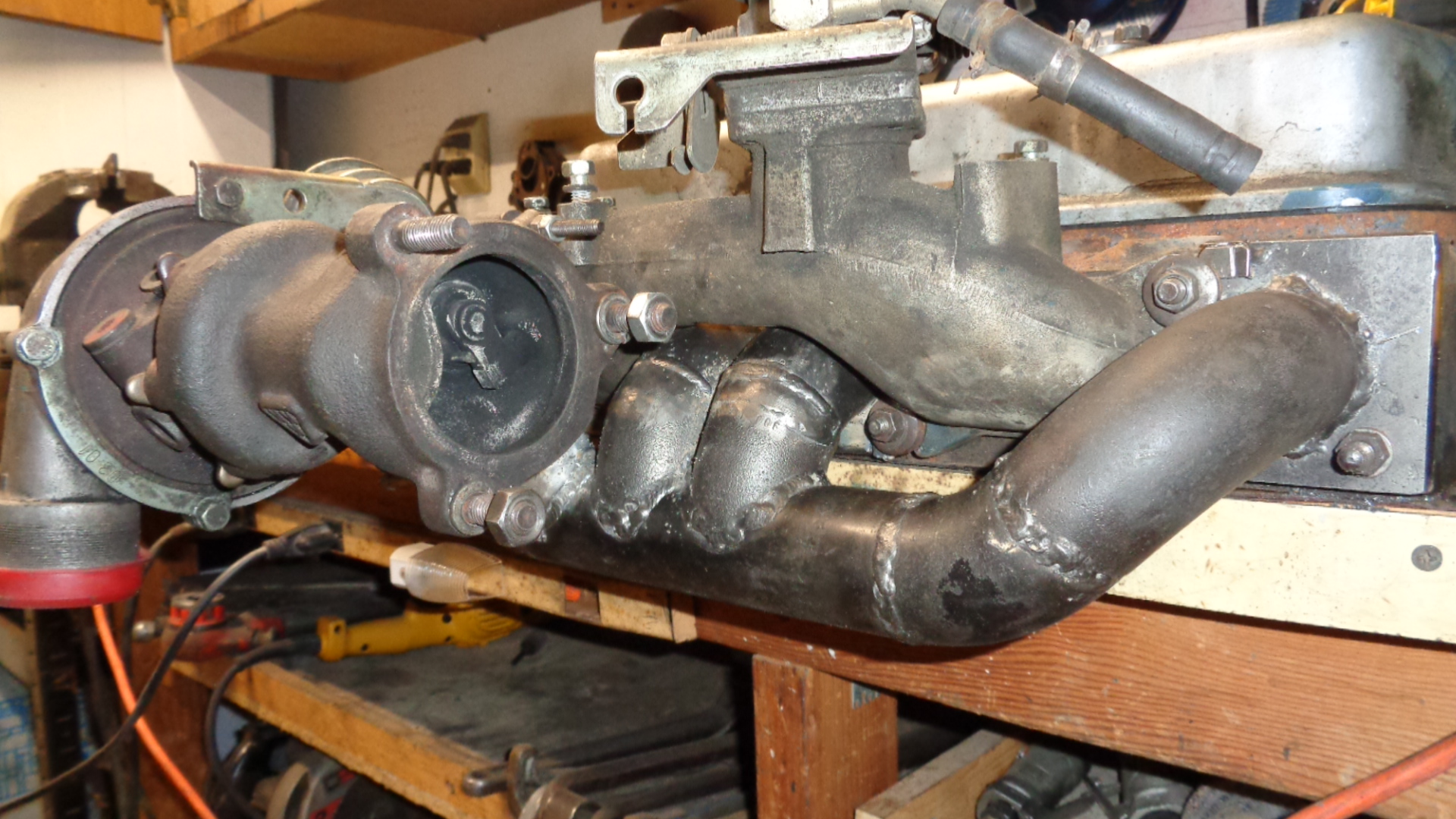 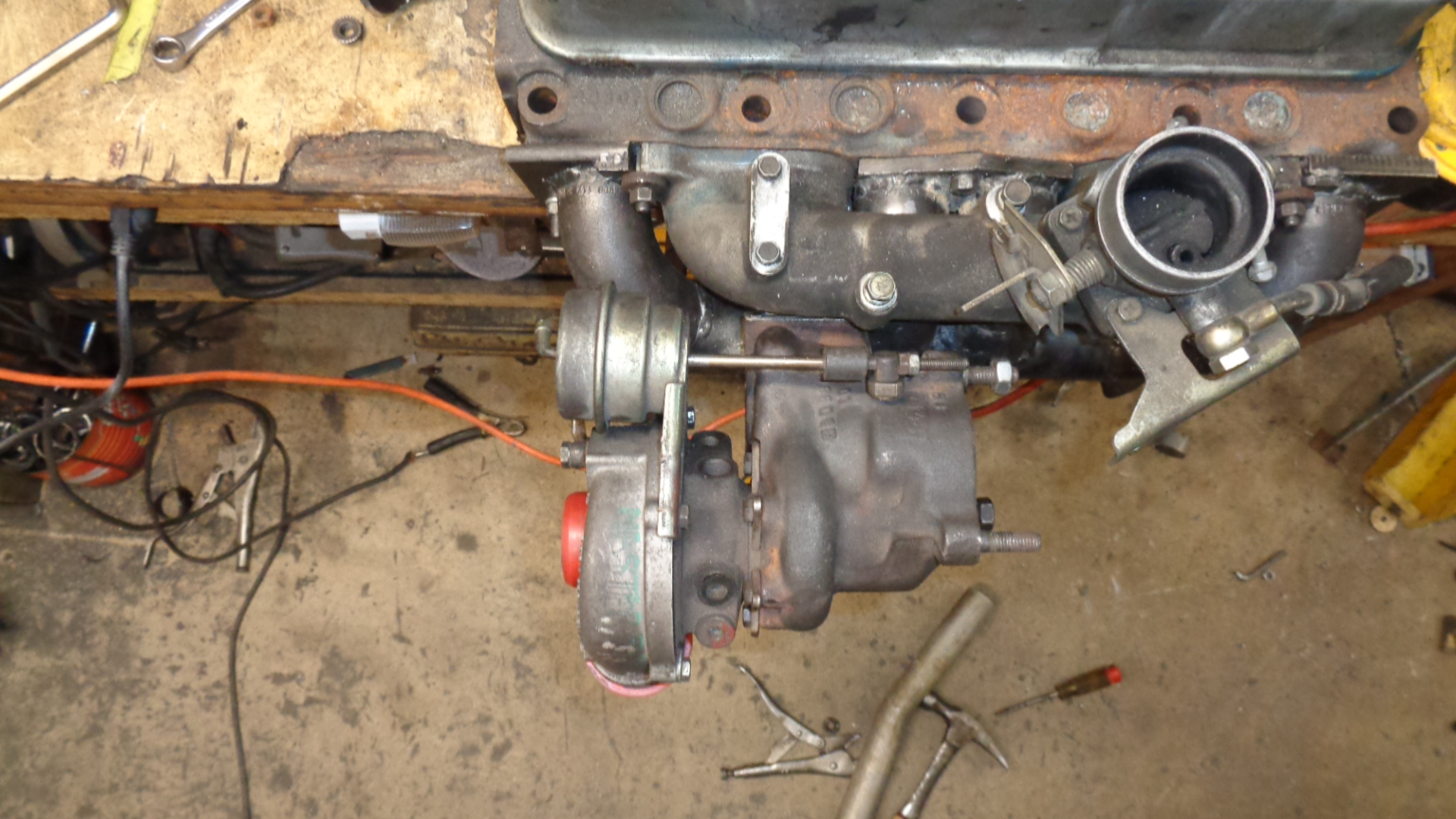 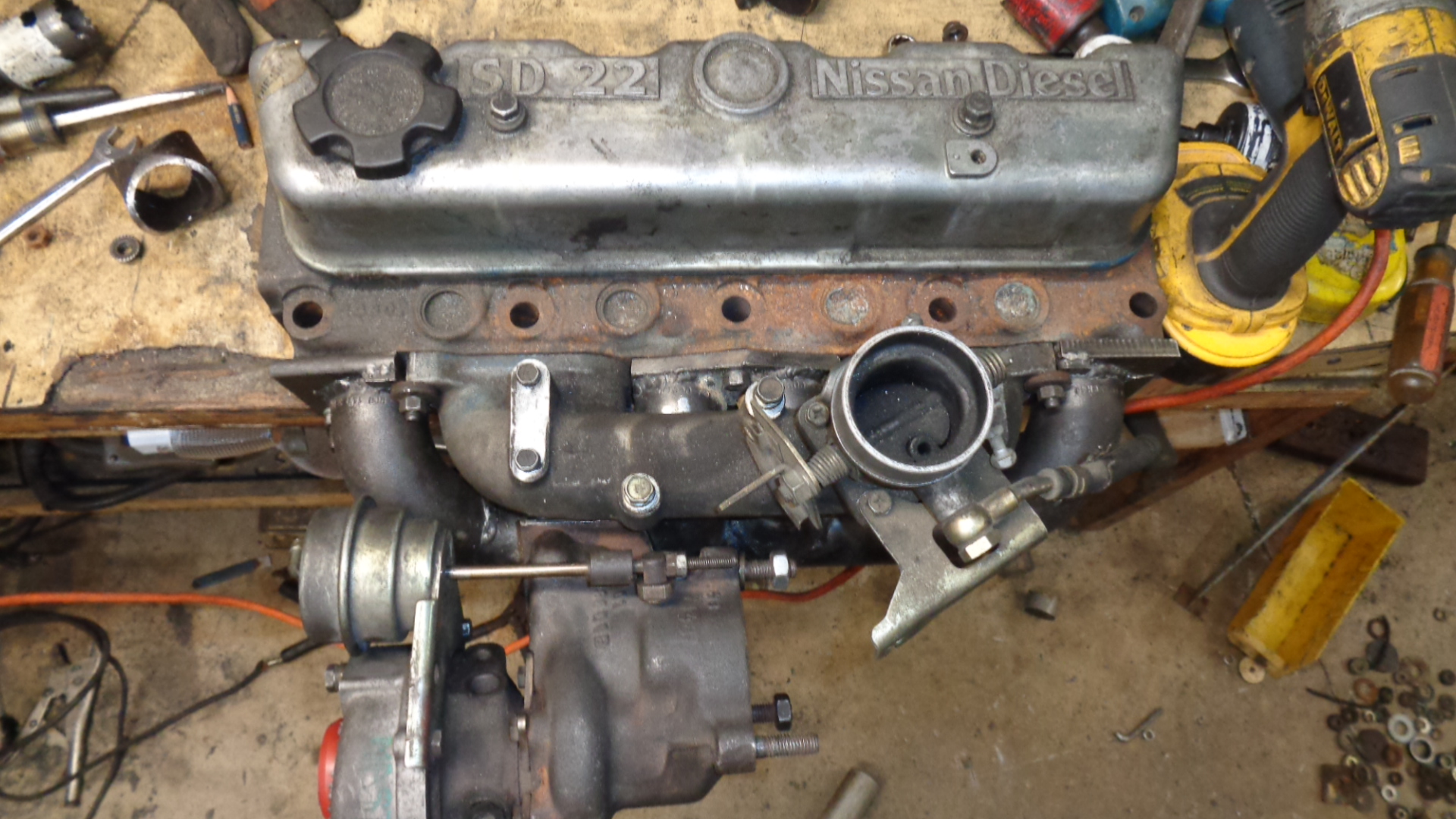 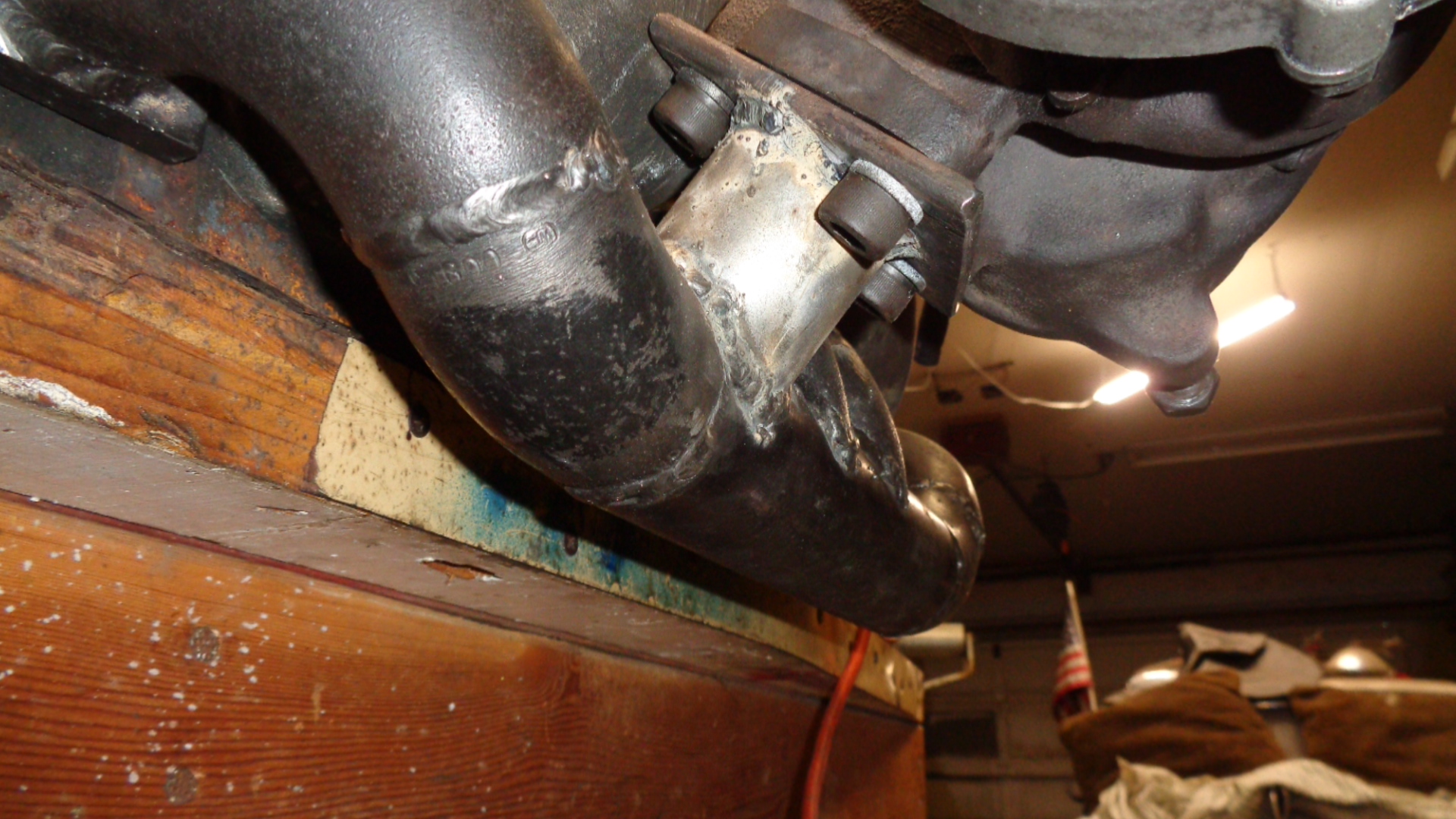 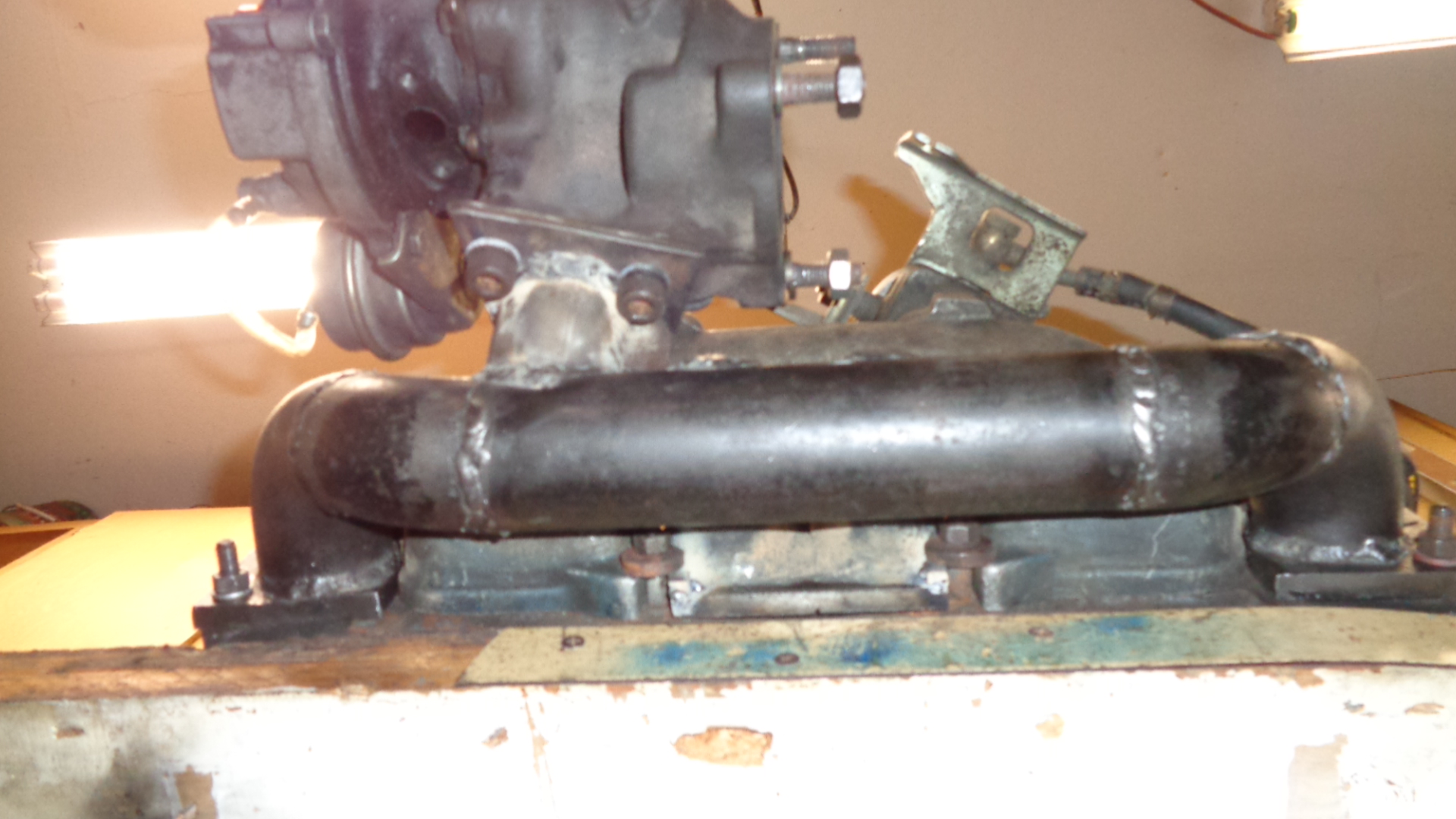 I do not know if this was a good place for the bung for the EGT probe, but the metal tube holding the turbo is a much thinner metal and I did't want to drill a hole in it or weld a thick piece of metal onto that thinner metal and maybe melt thru. OK, I had to modify the waste gate mount bracket in post 62 to have the compressor discharge pointed the direction I wanted, well yesterday I decided to reconnect the inter-cooler back up, it turns out if I had just done that in the first place I would not have had to modify anything.
I took it for a test drive and it has never run better since owning it, it is also quieter for some reason, it still is at 8psi cruising at 65/70mph and jumps up to almost 15psi when going thru the gears or putting my foot into it on the freeway.
The EGTs are the same even though it has the inter-cooler connected, I have never noticed much of a difference but my inter-cooler is not hanging out in the open either, it's behind the grill and bumper, but so is the radiator and it cools the engine even with the inter-cooler and piping in front of it, if I had it to do again I would not have cut my sheet metal to install it as it is less than a 100 degrees difference between cooler and no cooler.
Here is the engine compartment with the inter-cooler piped in, not a lot of room to work on things on that side anymore. 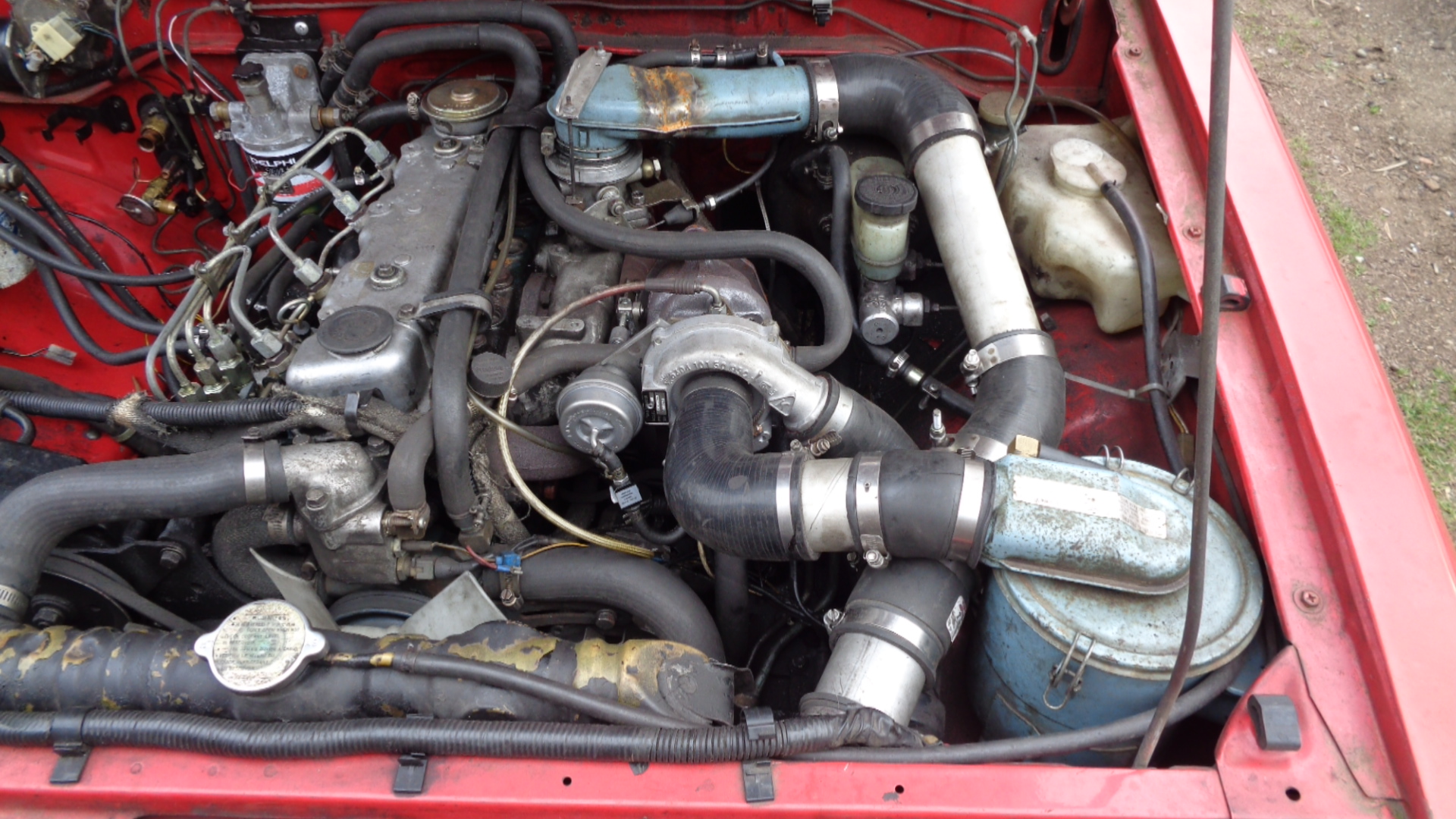 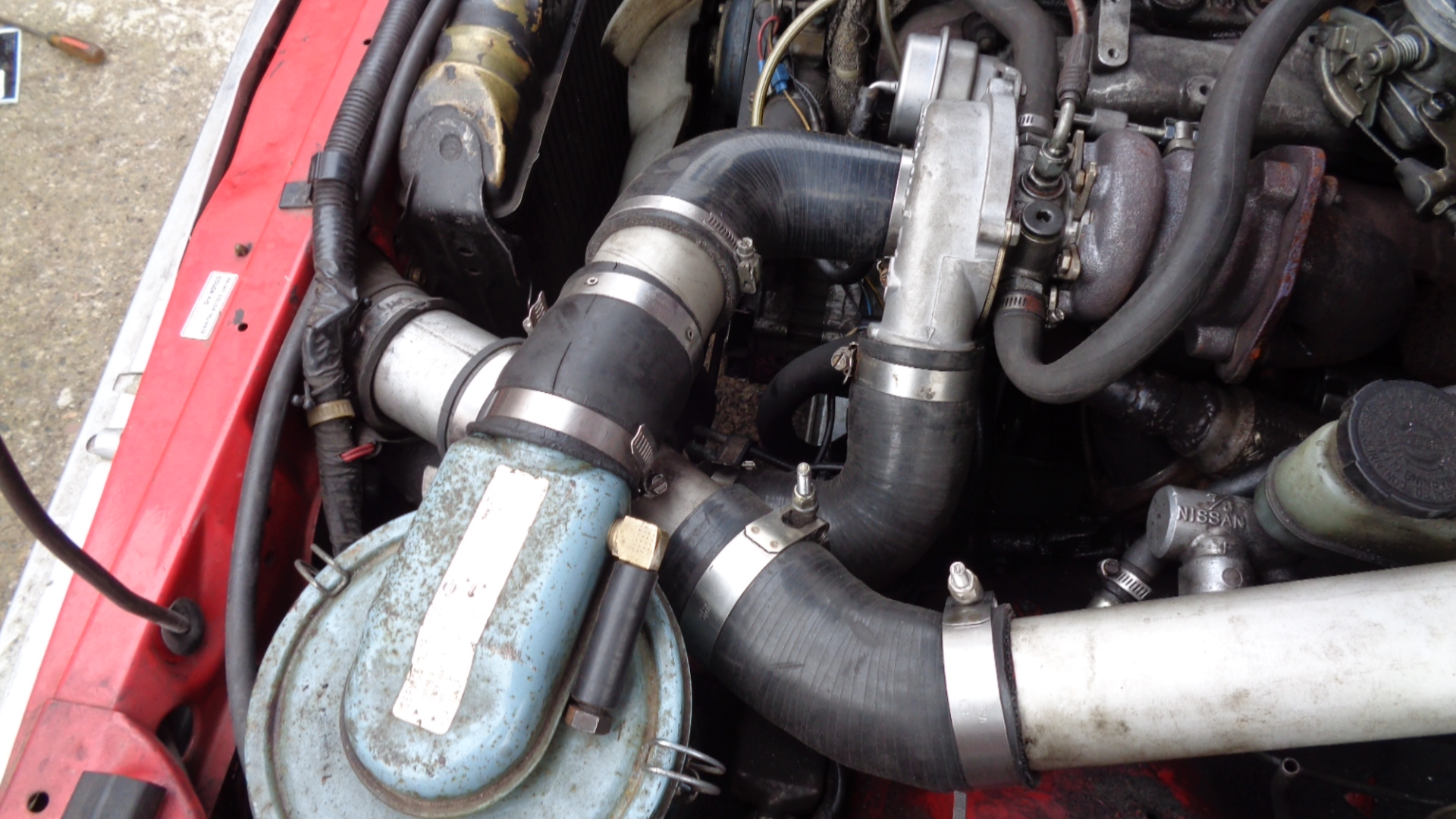 Here is the truck as it sits today, I put some Nissan 4wd leafs in the rear to lower it a little. My Datsun 521 kingcab turbodiesel is still a better/funner truck to drive, it has an OEM 1985/86 Subaru XT turbocharger on it, on the freeway cruising at 75mph it creates 4/6psi and runs cooler, but the EGT probe is just after the turbo instead of before it, so till I get around to relocating the probe I will not know how hot the EGTs are for sure, but the freeway cruising PSI(boost) is what I am happiest about, it has plenty of power with 4/6psi boost, it still gets up to 12/13psi when I am getting on it, the waste gate is adjusted to go no higher.
I know the voices are not real,
but they have some really good ideas.
Top
Post Reply
64 posts