I just recently installed a home made propane injection set up in my turbocharged SD25 (in a Volvo 240 wagon). I used a vapor propane regulator that is tapped into the intake (before the turbo). The amount of propane is regulated by the vacuum that is produced between the air filter and the turbo. Having a turbo is nice because the compressor turbine thoroughly mixes the propane vapor with the air intake.

I am very impressed with the extra increase in power...especially the torque (about 30% increase). Having the turbo makes the sd25 fun to drive, but adding propane makes it even better. EGT climbs slower ..and is about 100 degrees cooler on the same hill that I commute to work on everyday. I can already see a fuel usage difference in my 3 days of commuting to work (compared to running 100% diesel). The propane gauge (I have a 1 gallon tank) has barely dropped also. I should get some real fuel numbers in a few more days when I fill up both tanks and calculate what my average $$ per mile will be. I am hoping to kill two birds with one stone....decrease my overall fuel bill, and increase power. If not, the extra few dollars a week for propane is already worth it. I have noticed that the engine runs quieter, smoother, starts easier and the exhaust smells very clean...like a propane forklift. Cleaner exhaust means my oil intervals should increase.
Last edited by larrynsr 7 years ago, edited 1 time in total.
Top

Can you please post some photos and more of an explanation of your system.

I will try to get some pictures posted this weekend.

I just want to say that Propane is very dangerous. If you don't know what you are doing you can cause catastrophic engine damage and/or death.

A one gallon propane tank is fitted with an electric propane fuel shut off valve (for safety). A hose is then run to the propane regulator located in the front of the vehicle.

The regulator I used is a IMPCO model J regulator from a propane fork lift. I modified both the internal diaphragm springs (high and low pressure) to work with my turbo
(This is the most important part of the whole system. This diaphragms controls the amount of propane vapor to the amount of vacuum produced between the air filter and turbo. If you do not modify the diaphragm springs correctly, it can dump too much propane vapor into your engine and cause major damage. I do not know and cannot tell you how much to cut or shim the springs..as turbo and non turbo engines have different cfm and other variables have to be considered also......such as engine condition, engine displacement, altitude, temperature, etc).

A hose coming from the regulator is then run into a drill and tapped hole on the air filter canister lid to inject propane vapor into the engine.

As engine RPM increases, the amount of vacuum between the air filter and engine intake increases as well. This vacuum then operates the regulator diaphragm to open the valve to inject propane vapor. The higher the rpm, the more the vacuum, the more vapor.
81' Volvo 240 Wagon
SD25/Turbo/Intercooler/Propane
Top

Hey Larry, will a dirty air filter effect the vacuum level over time, therefore making the mix richer(more propane)?
I have not done a thing to mine since buying them parts from you, I received a very rare car recently, now all my time is being invested in it at the moment.
I know the voices are not real,
but they have some really good ideas.
Top

waynosworld wrote:Hey Larry, will a dirty air filter effect the vacuum level over time, therefore making the mix richer(more propane)?
I have not done a thing to mine since buying them parts from you, I received a very rare car recently, now all my time is being invested in it at the moment.

I have a vacuum gauge that monitors the air filter condition.
81' Volvo 240 Wagon
SD25/Turbo/Intercooler/Propane
Top

Thanks Larry. I will look into this more a little later.
Retired Pauly
Problem with being retired is that you never get a day off.
1987 D21-J SD25 KC
KJLGD21FN
Top

its been almost 3 weeks now on propane. looks like I'm only saving $3-$4 per fill up of combined city and highway driving. the true highway only test will be from Portland to bend Oregon...about 400 miles round trip in a few weeks. I will update the milage when I get back.

the cost of the complete regulator, tank, hoses and all the fittings come up to about $200. it will take a while to pay for the system but I drive the sd25 every day and plan to keep this engine forever.

I have also noticed my boost has dropped about 2psi when running on propane along with the lower egt. it makes sense because the combustion is so much more efficient and most of the energy is used as power instead of exhaust to drive the turbo. my next project is to build a methonal/water injection system to further more drop egt and increase combustion efficiency.

if you guys need a bit more power on a small budget, i think propane is the way to go. there are a bunch of propane do it yourself article. here is a good one:

most all of them use a acetylene regulator that is set to a specific flow regardless of rpm not like mine which flow is dependent on rpm. its easier to tune using a acetylene regulator....start with low flow and slowly turn it up until your happy with the power. be careful as too much propane is bad and will cause the engine to knock and destroy the engine.
81' Volvo 240 Wagon
SD25/Turbo/Intercooler/Propane
Top

Thanks Larry
Retired Pauly
Problem with being retired is that you never get a day off.
1987 D21-J SD25 KC
KJLGD21FN
Top

Any chance you could post pics of the setup?
I'm curious to see how it does long term, will be following.
Top 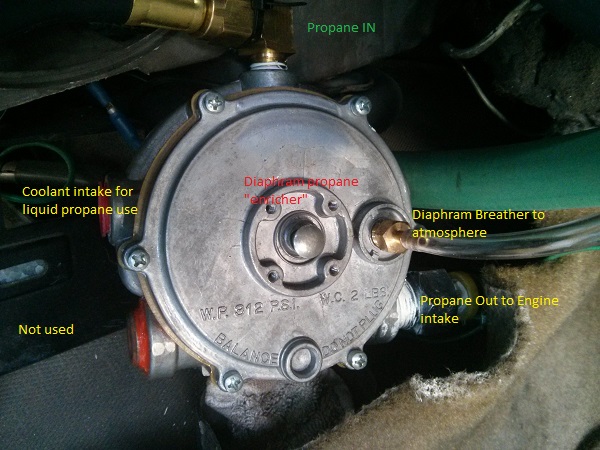 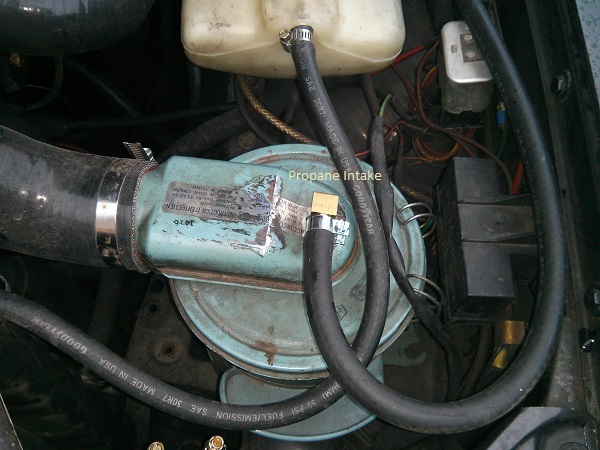 I have a feeling this setup will last a long long time. I have 340,000 original untouched miles on this engine now. This engine has been babied since the beginning (always 2000 mile oil changes with delo 400 and warm up cool down every time). I put the turbo on at about 330,000 miles and about 1000 miles on the propane. It's amazing how effortlessly this engine produces nearly double the power (seat of the pants feel) that it had when it was all stock. It keeps running better and better with every mile. I'm very happy with this engine.
81' Volvo 240 Wagon
SD25/Turbo/Intercooler/Propane
Top

fascinating, thanks for posting the pics.
I had done a little research on the internet about using propane on a diesel, particularly on the SD motors, but found more misinformation (and fighting amongst internet 'experts') than information. I gave up the search after several 'experts' rants....
Do you think you would get similar results with a non turbo?
Top

elminero67 wrote:fascinating, thanks for posting the pics.
I had done a little research on the internet about using propane on a diesel, particularly on the SD motors, but found more misinformation (and fighting amongst internet 'experts') than information. I gave up the search after several 'experts' rants....
Do you think you would get similar results with a non turbo?

Your very welcome. Yes I agree that there is a lot of "he said she said" and "theory" based comments about propane out there and they are mostly negative...... but very few real world facts from people who actually have done it and use it. All I can recommend is to make sure all your propane connections are leak free (use soap and water to test) and start with very little propane and move up in small increments. Do not get greedy thinking that if you pump in more propane the better....because you cannot control when the propane will ignite. Too much propane during compression stroke and it will pre-detonate and blow your head right off....kind of like ether. You also don't want too much propane to replace the air...because you will be running a very propane rich mixture and you need oxygen for combustion.

I am sure a stock SD will benefit from propane, but how much I do not know. The website that I linked on the DIY propane kit was on a naturally aspirated indirect injection engine and the author says he had great gains. Indirect injection is indirect injection. They all use a pre-combustion chamber and ~22:1 compression ratio, so I would assume installing one on a stock SD will see an increase in power. It would be great if somebody can install propane injection on their stock SD and report back with the results.

Here are some great videos I found on youtube.

Note: Do not start with the pressures that these videos show. Our engines are smaller. Also all these videos use an acetylene regulator which is easy to install.....the impco model j that I used is hard to tune.
Last edited by larrynsr 7 years ago, edited 2 times in total.
81' Volvo 240 Wagon
SD25/Turbo/Intercooler/Propane
Top

There's a lot of way to do propane enrichment (fumigation) wrong. Your setup looks impressive. I like the idea of your modified Model J. (I've got a stack of Model Es I need to eBay out of my garage.)

I haven't heard you mention that your tank is a DOT-approved model, which I'd consider a necessity, and if it's trunk-mounted it needs the DOT-require airtight box and venting to outside -- no possibility of gas making it into the trunk or passenger compartment.

(A cheap 740 diesel sedan just hit CL here today, and it had me pondering it for a project, but nah. The VW Six just doesn't get good enough mileage for me to make a 30-year-old car my DD on my now 54 mile commute. I like the idea of a turbo Four, but I miss my LD28 Six.)
Regards,
Al S.

ive also pondered propane injection. I also like your idea with impco regulator. what are you using for a feed tank? wet or vapour? as this should change your end BTU output and storage volume. industrial propane vs bbq propane is different slightly. also you could do pressure adjustment with the vapourizing sping inside. i cant rememeber what full flow pressure is on those J's its not much and they need vacuum to operate which is good safty

have you thought about adding nitrous also? i remember back in the day when bully dog was making propane kits. but it seems propane has gone the way side vs nitrous or nitrous propane.