The $1600 (1999) rebuilt A4LD that I only got 85k miles out of before the TC clutch grenaded and spewed clutch material all over. 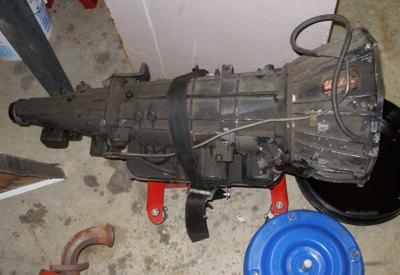 The shiny blue TC is the replacement ($200) TC I put in (Nov-06) to replace the one with the grenaded lockup clutch. It lasted fine through the trip to LA and back, but three weeks ago something else broke inside the trans.

So I picked up a generic $150 used trans, put the nearly-new TC in, new front & rear seals, filter, pan gasket. Put it in, the modulator leaked so swapped them.

Here is how I manhandle transmissions when my back is giving me trouble. Go ahead, laugh: it probably only weighs 150 lbs, and I loaded it into the trailer, out of the trailer, and onto the piano dolly myself, but that's when I was feeling better. Last weekend was rainy, and I wasn't going to clean this trans outside with rain coming down sideways, so I covered the table saw at work with plastic, then with cardboard, and cleaned it inside. No real "clean" pics shown, well inside the bellhousing got cleaned up pretty nicely, but I think I forgot to take exteriour "after" shots. These are after the car wash, though. Transmissions often do not clean up well at the car wash, and this was the case with this one. 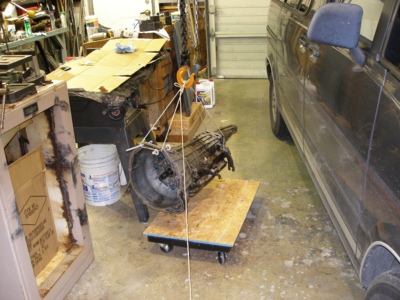 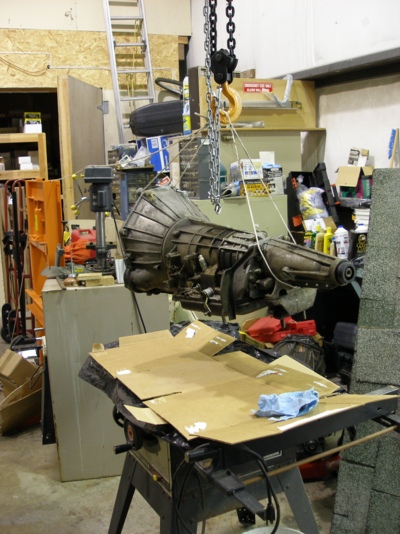 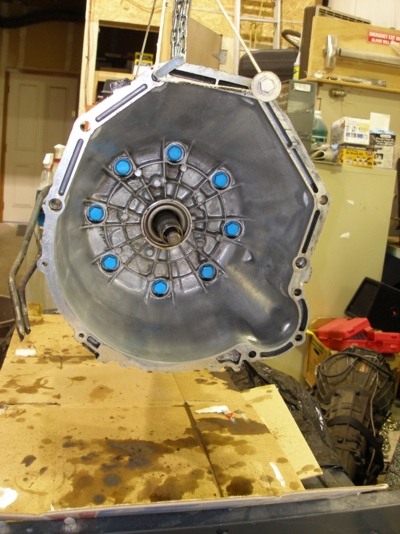 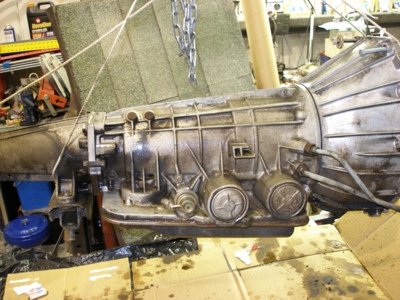 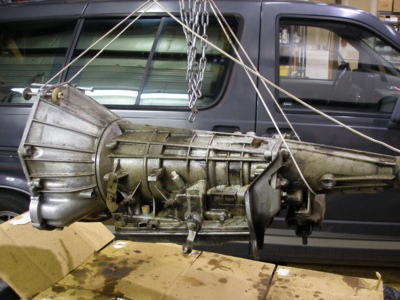 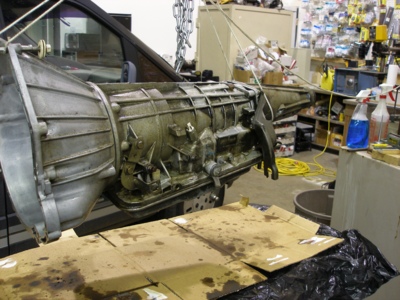 I have about 100 miles on this combo, seems fine, if quite different from my old "rebuilt" one -- shifts at different points, with a lot less drama than mine did. Only downside so far is a manual downshift from OD to D (4th to 3rd/direct). If the TC is locked, that downshift is damned harsh (unlike my old rebuilt one). I mean harsh harsh. But if the TC is unlocked it's fine. It's forced me to change my driving habits, as my commute has four places one direction, three the other, where I manually downshift, but not any more.

I noticed earlier that the A4LD in the Green '93 does exactly the same thing.

Went to the JY today, bought two MF switches for the Green '93 Aero. This later Aero has different weak spots from the old '89. The two I recalled today at the JY: one is the base of the column shifter. Through '91 or so, the A4LD shifter is on the floor, a wretched long stalk that I grew accustomed to but never liked. In '92 or '93 Ford redesigned the Aero: flush headlights (blech), smoother grille, completely different dash, and they moved the shift up to the column, and added the brake pedal interlock (which will get deactivated on mine pronto, I hate the things). I've seen several Aeros of this later ilk with broken shifters. The lever you grab attaches to an aluminum casting that is about 14" long; at its base a steel plate with a arm is bolted to the casting with two screws. The steel arm is where the shift cable attaches. The casting breaks around those two attaching screws.

Most of the late Aeros in the JY had that casting missing already (making pulling the MF switch absurdly easy, since the columns were dropped; most of the MF switches were also missing though), but one not only was intact but has new Ford replacement part labels on it and was nice and shiny, so I spent some time trying to recover it. Unfortunately, once I got it out I found it was also broken, same place. Sigh.

I'd had at least three come through our shop with them broken.

I have one Ford dealership that had been supplying me with replacement pigtails and new connectors for these things, but that was two years ago. So I cut off the one good one I found, just in case I can't buy them new anymore.

I did finally find two intact MF Switch assys and bought them both -- hey, one of them will probably work! If people are buying them out of the JYs, they probably go bad. Mine has some problems with the wiper delay knob pot. When I touch it, the delay relay under the dash goes crazy. So replacing it is in my future, and it's fairly easy to replace.

Also bought a pair of OEM radios, one w/cassette. My 'Green '93 has some cheesy Panasonic cassette, one of the newer ones without a real volume knob, I can't stand digital controls for volume, I want a damned KNOB.
Regards,
Al S. Again, from JY 1990 rig. Rubber bushing at the top was leaving rust trails. Both '89 and to a much lesser exten the '93, squeak as the suspension is compressed. There is a TSB on the early ones for the coil spring seat. I narrowed it down to one of the three upper A-arm bushings on the '89 and just lived with it for eight years. Since I have this one out, I'm ordering a new bushing for it. New brake stuff too (wheel cyls, all hardware/springs, and shoes).

This axle shown is a 1990 "B4" code: 3.73:1 and Trac-Lok clutches. It differs from the '89 and older by having a companion flange mount for the u-joint as opposed to a yoke on the earlier ones, and having a sensor for the speedometer/ABS -- earlier Aeros have no ABS option, and the electronic pickup for the speedo was in the conventional location at the trans' tailshaft housing.

So a 1989 and earlier rear axle does not fit well in a 1990-on Aero. Unfortunately, although I knew that, I had also forgotten it, so I had bought a 1989 "A2" code axle already (4.10:1 & Trac-Lok). The JY agreed to refund my purchase price on it as long as the markings are still on it, I still have the receipt, and I return it within 30 days. I can do that, and will, this Saturday. Another damned 200 mile round trip.

I hauled both axles in the back of the '82 Wagon, on large sheets of cardboard that I hoard and stash whenever some comes my way. I unloaded the above axle into a util trailer (6' wide) so I could take it to the car wash this morning and launder it. Towed it behind the '82 Wagon, of course

I just found a tech article I wrote back when I had the trans out for the second time on the '89, to replace those leaking rear casting plugs. I wanted to replace the rear main seal while I was in there, and needed help installing it.

I built a tool, took pics, and did a write-up, submitted it to ford-trucks.com, and about a year later (!) they sent me a free T-shirt. Article is here.
Regards,
Al S.