A price to pay for alternative fuels
BRUCE HENDERSON
bhenderson@charlotteobserver.com

Bob Teixeira decided it was time to take a stand against U.S. dependence on foreign oil.

So last fall the Charlotte musician and guitar instructor spent $1,200 to convert his 1981 diesel Mercedes to run on vegetable oil. He bought soybean oil in 5-gallon jugs at Costco, spending about 30 percent more than diesel would cost.

His reward, from a state that heavily promotes alternative fuels: a $1,000 fine last month for not paying motor fuel taxes.

He's been told to expect another $1,000 fine from the federal government.

And to legally use veggie oil, state officials told him, he would have to first post a $2,500 bond.

Teixeira is one of a growing number of fuel-it-yourselfers -- backyard brewers who recycle restaurant grease or make moonshine for their car tanks. They do it to save money, reduce pollution or thumb their noses at oil sheiks.

They're also caught in a web of little-known state laws that can stifle energy independence.

"If somebody was going to go to this much trouble to drive around in a car that uses soybean oil, they ought to be exempt" from state taxes, he said.

The N.C. Department of Revenue, which fined Teixeira, has asked legislators to waive the $2,500 bond for small fuel users. The department also told Teixeira, after the Observer asked about his case this week, that it will compromise on his fine.

But officials say they'll keep pursuing taxes on all fuels used in highway vehicles. With its 29.9-cent a gallon gas tax, the state collects $1.2 billion each year to pay for road construction.

"With the high cost of fuel right now, the department does recognize that a lot of people are looking for relief," said Reggie Little, assistant director of the motor fuel taxes division. "We're not here to hurt the small guy, we're just trying to make sure that the playing field is level."

State policies firmly endorse alternative fuels.In 2005 legislators directed state agencies to replace 20 percent of their annual petroleum use with alternatives by 2010. About 6,000 of the state's 8,500 vehicles are equipped to use ethanol. The state fleet also includes about 135 gas-electric hybrids.

Few states, however, are prepared to regulate the new fuels, says the National VegOil Board, which promotes vegetable oil fuel.

"State offices do not have the forms to appropriately and fairly deal with VegOil, nor the staff to enforce the non-existent forms," said director Cynthia Shelton. "So either they tell people inquiring about compliance to get lost, or they make them jump through a bunch of arbitrary hoops."

In the mountain district of state Sen. John Snow, D-Cherokee, home-brewed ethanol was once known as moonshine. But a couple of constituents who made it for fuel have been fined for the same tax violation that got Teixeira in trouble.

"One of the biggest problems in the state is a real lack of information for people who want to use alternative fuels," said Snow's research assistant, Jonathan Ducote. "It's just now appearing on (regulators') radar."

Done in by bumper sticker

Teixeira's story began near Lowe's Motor Speedway on May 14. As recreational vehicles streamed in for race week, revenue investigators were checking fuel tanks of diesel RVs for illegal fuel.

"It was like some twist of fate that put me there," he said. "It was like I was asking for them to stop me."

Teixeira says revenue officials are just doing their jobs. But he thinks it's unfair that he was lumped with people who purposely try to avoid fuel taxes.

"Individuals who are trying to do the right thing environmentally cannot and should not continue to take this kind of financial hit," he wrote Gov. Mike Easley.

"I'm ready to get myself legal," he said, "and start using vegetable oil again."

I wouldn't be surprised if it wasn't some of the used cooking oil reclamation folks making a stink about this. It's has the potential to cut into their revenue and they don't like it. It's so much easier just to fill up with BioD....
'81 KC 720 Diesel - JN6SD06SXBW009226
Future BioDiesel Beast - too ugly to get stolen
03 Jetta GLS TDI Wagon 5spd (wife's new ride)
Top

in new zealand you buy a 10 000 KM tax disc[sticker] for diesel vehicles.
this is the best way.simple.

all fuel is taxed/excised in australia in a similar way to the united states.
This dont work it just plain dumb,ask any housewife.the problem is some users recieve rebates and different states levy at different amounts and in rural australia LPG/petrol/diesel is used to generate household electricity and cooking.

when the tree huggers take over in the next few years[yes they will]you see the cost of energy go in one direction.GUESS.its not down.

the price of fuel here is based on singapore standard price.LPG wholsale price has always been half that of petrol.a scare campain recently has convinced public that LPG will be the same price.in fact it will rise a minimum amount as excise is added for the first time to raise gas to world parity pricing.peope cancelled LPG cars sales and government now gives conversion rebate to keep the local industry open.
world parity was introduced here in 1970's to stop cheep fuel purchased in australia being exported.
WCJR31 Skyline.3.0 manual.wagon
R31 SKYLINE/Passage GT/PINTARA
LPG Ford Falcon 99-06 93 Disco
Local Shire Southern Zone Mechanic.
Top

I'll resurrect this one to say that I know that this guy had the charges dropped and the NC legislature has made it law that homebrewers won't be taxed on fuel they make.
1984 Nissan 720 4x4 gasser converted to SD22 diesel power, now with boost
2001 Subaru Impreza 2.5 RS daily driver
1988 Mitsubishi Mighty Max Turbo for fun -Sold-
Raleigh, NC
Top

Do you think you could get away with it if you still used diesel, oh.....about 1/2 the time?
Trying to catch some Zs? Keep on dreaming.

AStevens wrote:I wouldn't be surprised if it wasn't some of the used cooking oil reclamation folks making a stink about this.

I heard that the waste oil lobby in Calif. got their way two years ago and got a regulation in place that requires anyone who hauls waste oil to get a state license. ISTR that it cost something like $100-250 per year for that license.

Waste oil is a revenue stream for the reclamation industry. You can bet it's (reasonably) big money, at least for the people involved.


It's so much easier just to fill up with BioD....

Not here, anymore. After six years of retail BD availability, our area now has no BD available at the retail level. I filled up with petrodiesel for the first time for local use this morning. Gack, the Maxima smokes badly on PD.

I will be buying a tote after Christmas, keeping it at work in the warehouse, and having it filled monthly (or forklifting it into our overworked utility trailer and taking it to be filled). I cannot bear to drive on foreign oil anymore (though I am still content to use foreign oil for other purposes, of course: I am a self-aware hypocrite.)
Regards,
Al S.

asavage wrote:SNIP- I filled up with petrodiesel for the first time for local use this morning. Gack, the Maxima smokes badly on PD.

Overnight degrees lately have been 48 degrees F. First and second morning startups needed so cranking. It also backfired both mornings so far. 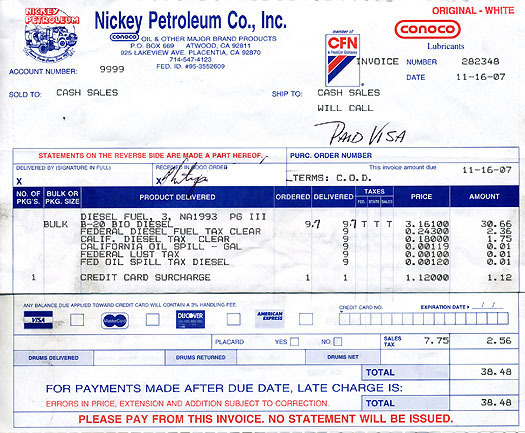 Of the taxes listed, they seem pretty reasonable to me.

Three of them add up to three-tenths of a cent.

Wish we could list that for every CC transaction.

What I don't get is CA Sales Tax, then another CA "diesel" tax. Hmmmm?
Regards,
Al S.

Wish we could list that for every CC transaction.

What I don't get is CA Sales Tax, then another CA "diesel" tax. Hmmmm? 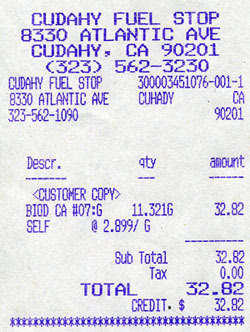 OK . . . the price of the fuel has gone up -- no surprise there. But have the taxes & fees increased?

Why does CA have two taxes on the same product?
Regards,
Al S.

asavage wrote:OK . . . the price of the fuel has gone up -- no surprise there. But have the taxes & fees increased?

Why does CA have two taxes on the same product?

Because ... there are counties adding to the state sales tax. Scroll back up to "Nickey Petroleum" (I added).

Take at this whole article.

"Taxes for gasoline in California are: 18.4 cents/gallon for federal excise taxes; 18 cents/gallon for state excise taxes; and local and state sales taxes. Sales taxes vary depending on the city and county you may be in...but on average the sales tax, roughly 8 percent, adds between 16 and 25 cents to a gallon of gasoline, depending on the local rate and the final price of the gasoline."