As I was driving cross country this summer I noticed big differences in Diesel fuel prices, depending on location of the fuel station. The closer to the Interstate Hwy the higher the price. The worst were the national Truck Stop chains, Love's and Pilot. They are really ripping the customers off.
Here is a drastic example. Mississippi exit 69 on I-10, $3.69 at the Truck Stop. Driving just 4 miles into town I could fuel up at a regular station for $3.39. But then it was just 40 ¢ difference between gasoline and diesel fuel. Recently the gasoline price dropped by as much as 40% here in the US while diesel fuel dropped only 5%. The price difference is now $1.20. Why? Nobody has an truthful answer. Perhaps it is just greed. I read that the US is exporting 30% of its ULSD production to Europe.

Oklahoman Published: December 8, 2014
With the dramatic drop in oil prices, and the commensurate drop in gasoline prices, why are we not seeing a similar drop in diesel fuel prices? The market is generally thought to reflect on supply and demand to establish prices. I have yet to see or hear of anywhere in the United States that has a shortage of diesel fuel, even considering that there is apparently an appreciable amount provided to European countries where diesel is the primary fuel. In Oklahoma, the tax on diesel fuel is 3 cents less than gasoline but statistically, the margins are considerably better on diesel sales than on gasoline. The truth is that lower gasoline prices help the consumer but diesel fuel prices contribute heavily to consumer prices for goods and services.
Capitalism is the engine that made the United States the richest nation in history. If practiced fairly today, it still works magnificently. But when all levels of government are squeezing all they can from us and some capitalists are doing likewise, it becomes apparent why many people in this country are discouraged and disenchanted. Fundamental decency and fairness, which helped shape our nation, seems to be disappearing just like the “Greatest Generation.” What a shame! What a loss!

Cost of fuel not strictly tied to supply/demand anymore. Market is full of speculators, hedge funds, etc. Sometimes just a perceived lack of supply is enough to set off a stiff price hike. There is also no guarantee that oil produced in the USA will affect oil prices in the USA. It's all an international market now. This helps explain why the proposed Trans XL Pipeline will actually do nothing to ensure USA oil self-sufficiency. It's for sending the Canadian shale tar sands oil direct to the gulf ports for export.

I heard an interesting explanation for specifically the higher prices we see for diesel fuel. If gasoline price rises too high, people can choose to drive less (i.e. cut down unnecessary trips) (most cars/trucks are gasoline powered in the US), but diesel fuel is principally used for business, as in trucking, trains, ships, power generation, heating, etc. so if price rises too high for diesel fuel there are no "unnecessary" uses to cut out. So, diesel users basically held hostage.
Top

Alberta Oil sands is just that, Oil extracted from sand.
It's not "TAR" it's actually called bitumen and syncrude , however, some people like to call it "Tar Sands" i guess. (more of a negative and inflammatory term for those that hate everything fossil fuel related.)

Most of the people that have adopted the Negativity about the oil sands have listened far too closely to the the self proclaimed Hollywood experts like David Cameron, Robert Redford, Leonard DiCaprio, Neil Young, etc etc etc. and given them far more credit for actually knowing ???????? well,,,,,,, "ANYTHING" outside of a photo/publicity op !

Why let actual facts get in the way of a good story right ?

Shale oil ( like that extracted in the Bakken area of North Dakota ) is an entirely different thing and process using horizontal drilling and hydraulic fracturing (fracking)..............
but then,,,,,,,,, another debate for another time.

Here is a bit of info on the Keystone Pipeline
http://www.forbes.com/sites/mikepatton/ ... -pipeline/

The Hysteria for this also seems to be driven by those that hate everything to do with fossil fuels and will proudly ride their bicycles to every protest/photo op.............. oh wait,,,,,,,,,,, never mind.

Here is a current map of existing pipelines in the US now.
http://www.theodora.com/pipelines/unite ... lines.html

As you can see this is nothing new, and most of it already exists.
As you can see from here:
http://www.eia.gov/tools/faqs/faq.cfm?id=727&t=6

Y'all presently net 42% of your oil from Canada now. Why not more ? Because there is not enough capacity to get you more. Therefore, you rely on Venezuela and Saudi Arabia for the rest. ( a bit from Russia as well, but, cant see that going on too much longer )
Any conflict in those places, or a "cooling" of relationships with Saudi ( aint been all that good with Venezuela lately) and you run short.
We all know how stable the middle east is now too.

Perhaps this is a scenario that may explain the recent fall in oil prices.
As more and more oil producing nations start to gain the capability to extract their own oil and not need to import, or depend as much on OPEC ( the largest producer of oil ) may be feeling the pinch, so therefore just drive down the price of oil to a level to eliminate the up coming competition and once that is done they can set whatever price they want for oil. The oil just about runs out of the ground in the middle east and they can still make money at 30.00- 50.00 a bbl. So keep it there while everyone else has to spend 65 to 80.00 make a bbl and they will just go out of business and, OPEC can once again be king of the hill and fix whatever price they like,,,,,,,,,,,,,, kinda like they are doing now.

So
Before you follow the naysayers into the cold and dark, best look at what may lay ahead. The oil that will be exported to other places from Keystone will be "after" what Y'all get what you need. It will also be an "uninterrupted/non conflict associated/stable supply.
In the meantime, there are 40,000+ jobs for your people and, the increase productions of your refineries.

The price of diesel fuel is also tied to the demand for heating oil as they are made in the same process. As this past November was one of the coldest ones in years for Canada, the contiguous US, and Northern Mexico this may have an effect on why the prices have not fallen on diesel.

This is one mans opinion though.
( and far more political than what I'm used to as well )

Price of diesel around the world:
http://www.globalpetrolprices.com/diesel_prices/

It is interesting to compare them to the gasoline prices. The US seems to be the only country whose place on the table changes significantly.
Irony.cc
Top

Diesel price dips below gasoline for first time since 2009

In my area diesel fuel price dropped below gasoline price between 10¢ and 60¢.
But that may be short lived:

Price parity between gasoline and diesel is likely to be a relatively short-term phenomenon, as gasoline demand moderates with the end of the summer driving season and diesel demand begins to grow in response to the fall agricultural harvest and the winter heating season. In the July Short-Term Energy Outlook (STEO), EIA projects that the diesel price premium will return and gradually widen later this year, with gasoline retail prices averaging $2.27/gal in December 2015 compared with diesel fuel prices at $2.87/gal. 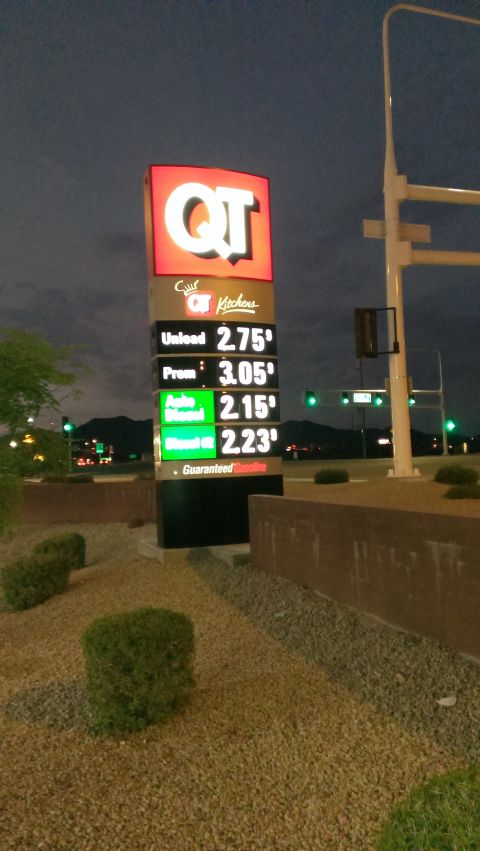