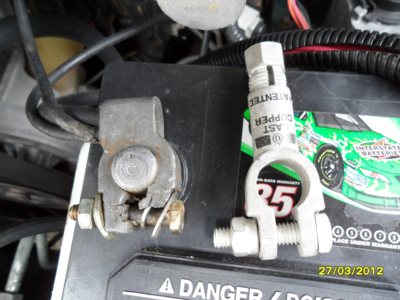 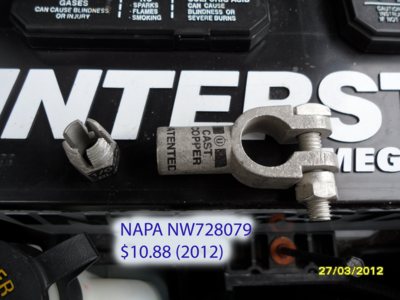 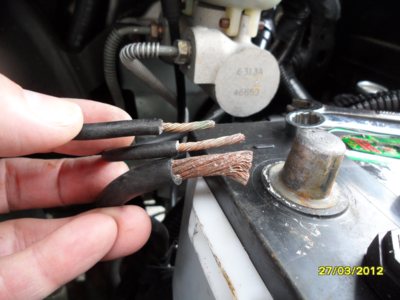 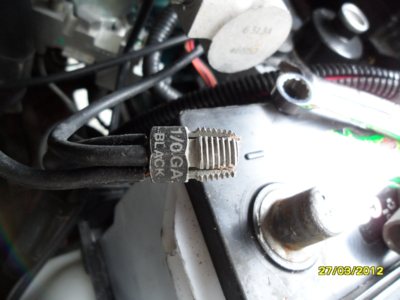 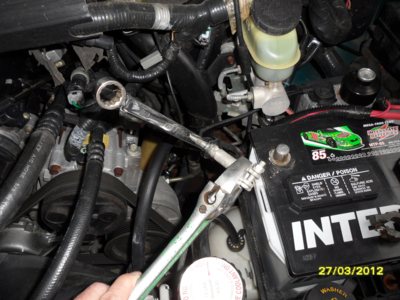 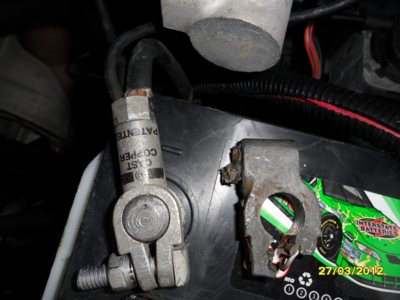 by plenzen
Al
This might work for me and the + term on my Nissan.
Does it come in different sizes ?
I mean for where the wires fit into the "compression" part?
There are a total of 4 wires on the one battery( I have two batteries).
Just wondering if you would have had room for 1 more ( of the smaller ones) in the one you used

Paul
by davehoos
should be alright if its tight.

other thing is sealing it up to stop any corosion.
they put a grease type sealer in the crimp on units we use at work.

pugeot in 70's/80's had a 2 piece bell shape with a wingnut on top.
you tightened the bell clamping bare wire to the post.

plenzen wrote:This might work for me and the + term on my Nissan.
Does it come in different sizes ?

It comes in different sizes, yes. I believe that that particular NAPA part No. is for 1-2ga cable. My main cable is 2ga (I think) and I was able to wedge two more 10ga ground wires beside it, barely.

I would not have had room for one more 10ga wire in this setup, no. And while I had some difficulty wedging in those two extra small wires, it did not clamp up quite as tight as I'd have wished, but it's still pretty darned secure.

I got the idea to ask NAPA about these, because I'd picked up a couple similar ones (with ring terminals) at last year's Portland Auto Swap Meet (the guy had a whole bin full of them, $1.00 a piece), with the idea I'd use them somewhere, but they're for 4ga anyway. 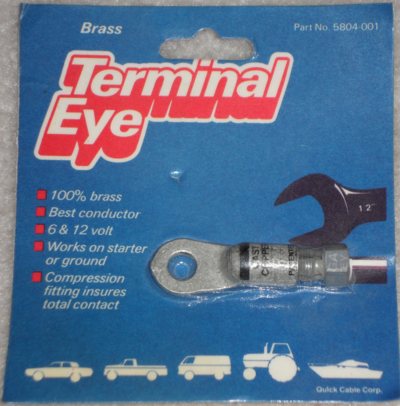 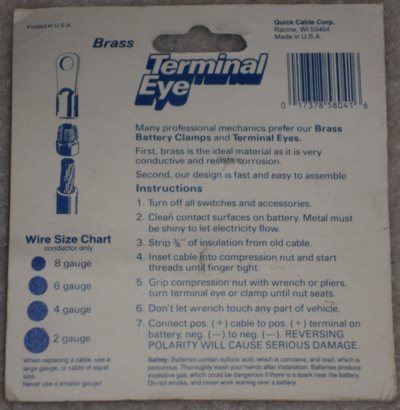 Now that I look at the packaging, I see that the NAPA parts are re-badged Quick Cable Corporation products. And that I can buy them in Positive, Negative, or Universal clamp styles. I'm pretty sure that the one I got from NAPA is a universal, as it does not fit the negative post as well as one might wish.

There are lots of cable sizes accommodated; see their web page at http://www.quickcable.com/products.php?pageId=326 . Below is a partial screenshot from there:
(click on image for larger) 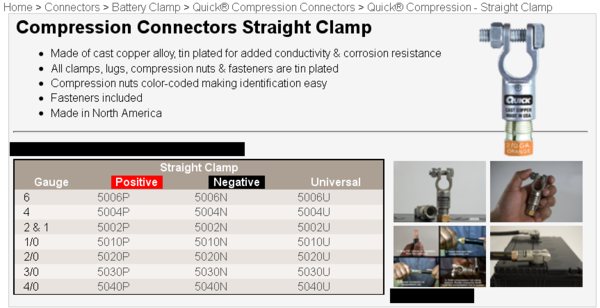 These are nice products, all brass, and made in the US for a change. I agree with Dave, that corrosion is probably still an issue with these. Mainly, I'll be happy if they work better than the typical universal clamp style that we all have used and hated; I never seem to get more than a year or sometimes two from them before they're crapped out.
by plenzen
I am wondering if you could solder them into the ends where the compression piece goes.
They say they are brass and the solder would melt sooner than the brass, but you would have to be careful.

Paul
by davehoos
i have a crimping kit but that looks good.
by rlaggren
Dave

If you're talking about soldering the wire into the fitting, that should work, but as I understand it, there can be issues: The solder tends to wick back up the wire a bit and at the point it stops it creates a stress riser because the wire with solder is stiff and hard but at the point the solder stops (abruptly), that's where the wire always wants to bend (sharply, right at that point). This can lead to early failure of the cable right there. Also, at least officially, solder connections are not considered reliable - you must have made a complete mechanical connection before soldering and a crimp by itself is considered better than a crimp with solder. Eg. the last time I checked (about 5 years ago) Coast Guard will not accept solder connections on boats they certify; the connection must be crimped.

Al probably knows a lot more about soldering, though and he can probably clarify.

Rufus
by davehoos
soldering.
that could cause mechanical fatigue but you wouldnt want the wiring vibrating that much.also you have to look at corrosion caused by different metals or the cleaning flux.often come across copper wiring soldered or brassed[sp?]as its to soft to crimp.

very rare that you can actually solder the battery terminal to the wire.maybe if both are tinned or the terminal is brass.
often with modern coated metals the solder wont stick to the surface but fill up the spaces.long ago winch cables had the ends soldered before being drawn back into the ends and crushed with wedges.it may have been lead.

most of the cable ends i replace are due to heat as they become loose because of corrosion.my practice of soldering the end of the cable before its crimped apears to work-but im working on automotive vehicles that at worst will be washed with bore water or river crossings.
i also do not do it with aircraft or marine as ther operate in high humidity but automotive isnt the same.

my air force mates inject rust proofing sealant into the ends of the wires.
marine and auto electric people have showed me the same.
recently i saw a device being sold to grease hand brake cables-a mate had one similar to force liquid into cables before crimping.we dip the ends of the cables in a electrical grease before fitting terminals to keep water out of the cables.at the car dealerships we used vasoline or lanoline it works very good.

wiring harness
never had to replace wiring on earth moving gear except that had been dammaged by trees.car stuff and trailers are always getting repaired/replaced as they are lighter quality of wire.with these electronic controlled cars using digital signals they are just crap.
by davehoos
solder the wire end before putting the end on.it should stop the cable being cut off.

the way it works is to squash the wire with the nut.

if you hit modern cable on the bench it cuts easily.by adding a bigger area to be compressed it shold last longer.
by asavage
Despite my revisiting this terminal twice in the past four months, it never held tightly over the long haul. Today, I isolated it, hit it with the propane torch, and soldered it.

by asavage
The solder joint has held up well. The location is such that these terminals don't flex much, if at all.

by asavage
I have a whole boxfull of Frantz toilet paper bypass oil filter setups somewhere, and at least three Motor Guard units, but I've gotten lazy in my old age have never gotten around to installing any of them

So I did the lazy thing: I ordered the AMSOil dual-filter setup that includes a full-flow filter and a bypass filter setup. Apparently, you have to order this setup à la carte, so it's customised on-the-fly. The basic setup is plumbed like this: 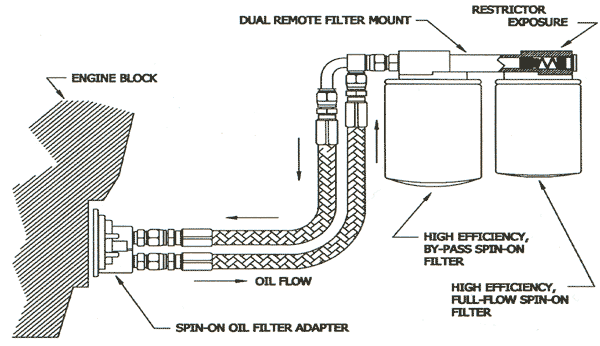 I plan on installing it on the right frame rail. I specified the optional oil sample valve (so I can draw off oil for periodic lab testing).

That list came to around $380 shipped and taxed. It's not particularly simple to figure out what to order; I'll have to see if I did it correctly.

I purposely ordered the smallest (shortest) bypass filter, a one-quart capacity unit, as I'm uncertain if I'll have enough vertical clearance for the 1.5 or 2 quart versions.

AMSOil has a wide selection of adapters & special fittings for various installation situations, but you pretty much need to do your own research on what you'll need. My install ought to be darned simple.

The OEM recommendation for oil changes is 7500 miles in normal use, which is mostly how I drive it these days (55 miles/day commute). When using AMSOil's Signature Series oil and their full-flow filter, they say you can run 25k OCIs (oil change intervals). With the bypass setup, and figuring a make-up oil rate of 1/2 quart per 5k miles (that's the current rate on this engine), I don't know that I'll ever need to change the oil again. Being conservative, I will probably change one or both filters annually anyway, just to feel like I'm doing something, but is it necessary? IDK.

by asavage
I got a P1744 a month ago. The torque converter clutch had died. This had happened on my '89 Aero too, which I drove until the clutch material plugged up the filter and the trans lost hydraulic pressure and stopped moving. The newer Aeros use an electronically controlled version of the same venerable A4LD, which they now call the 5R55E (in my case), and the electronics can tell that when the AT is told to lock the torque converter clutch, the RPMs should drop. When they don't, I get a CEL and a P1744.

Since this is an AWD rig, there's a transfer case. I am in my 50s now and while I've done several R&Rs of A4LDs in my various Aeros over the years, this is a different critter. I chickened out: I rented a bay in a self-service garage. Unfortunately, it's 1.5 hours away, but my AAA RV coverage handled that part nicely. Two days, $300 of bay rental and about double that in a torque converter, ATF, seals, tools, AT cooler flush, lunches, etc. and it's back on the road and I've got 1000 miles on it with no problems. 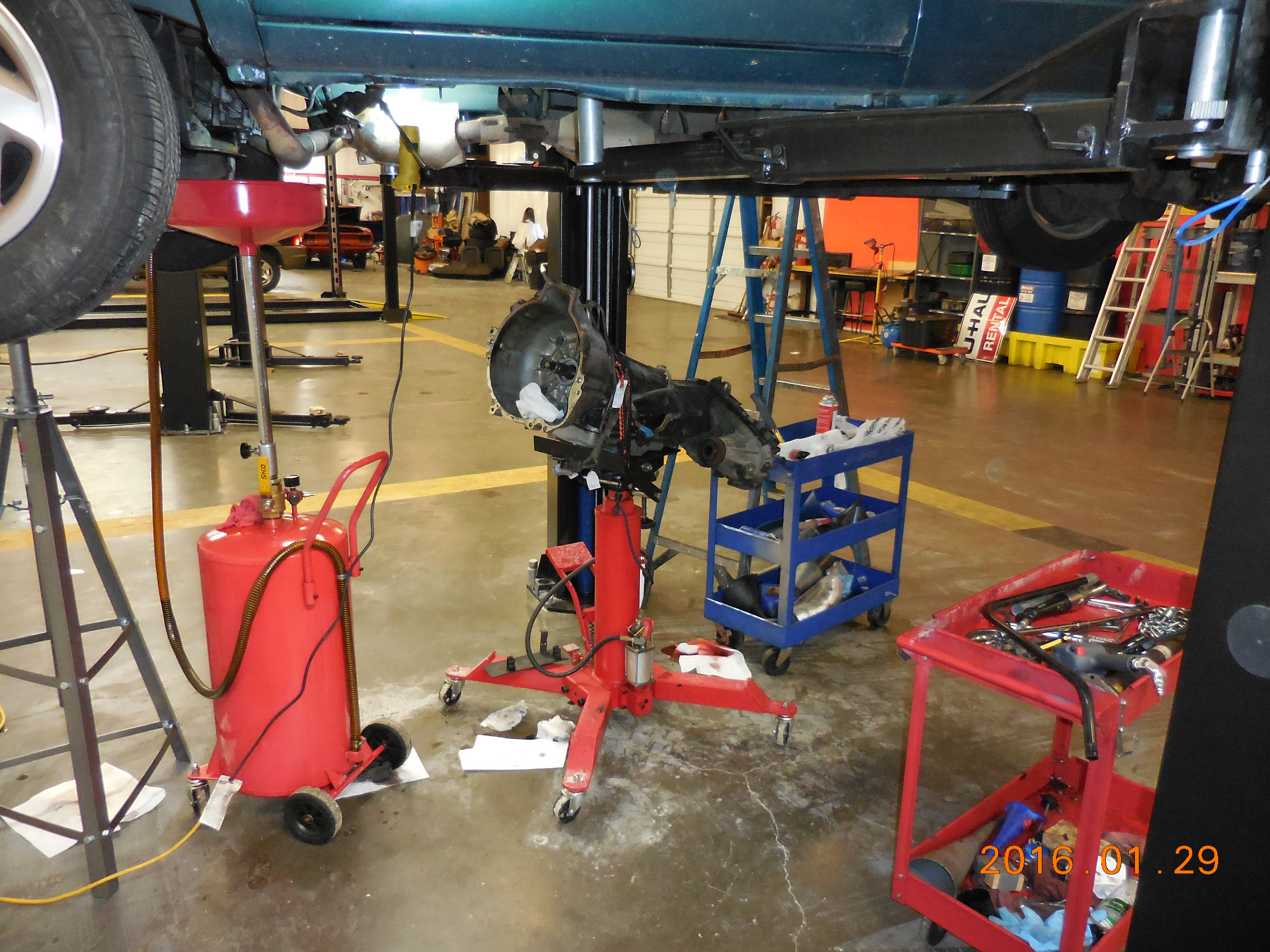 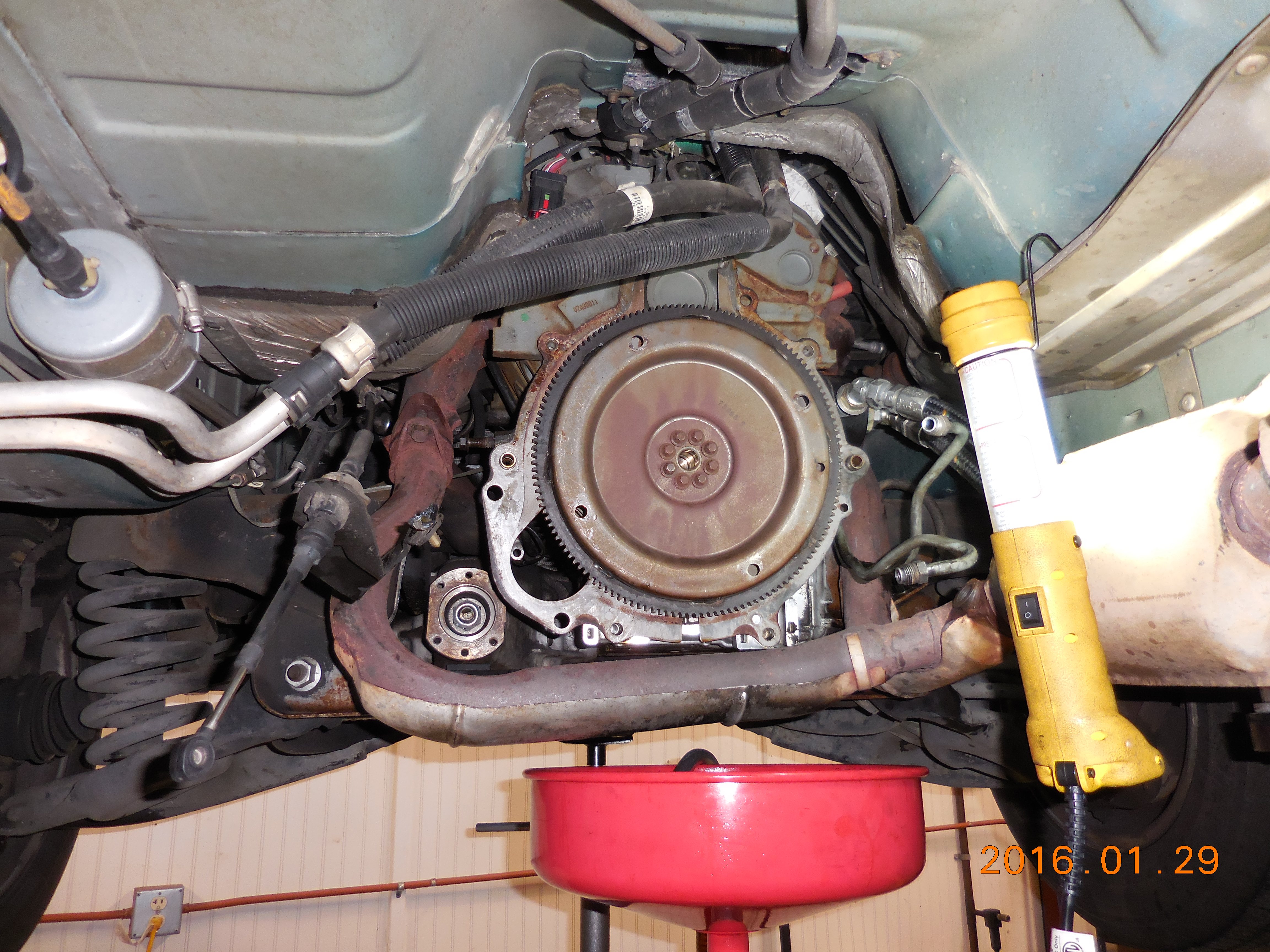 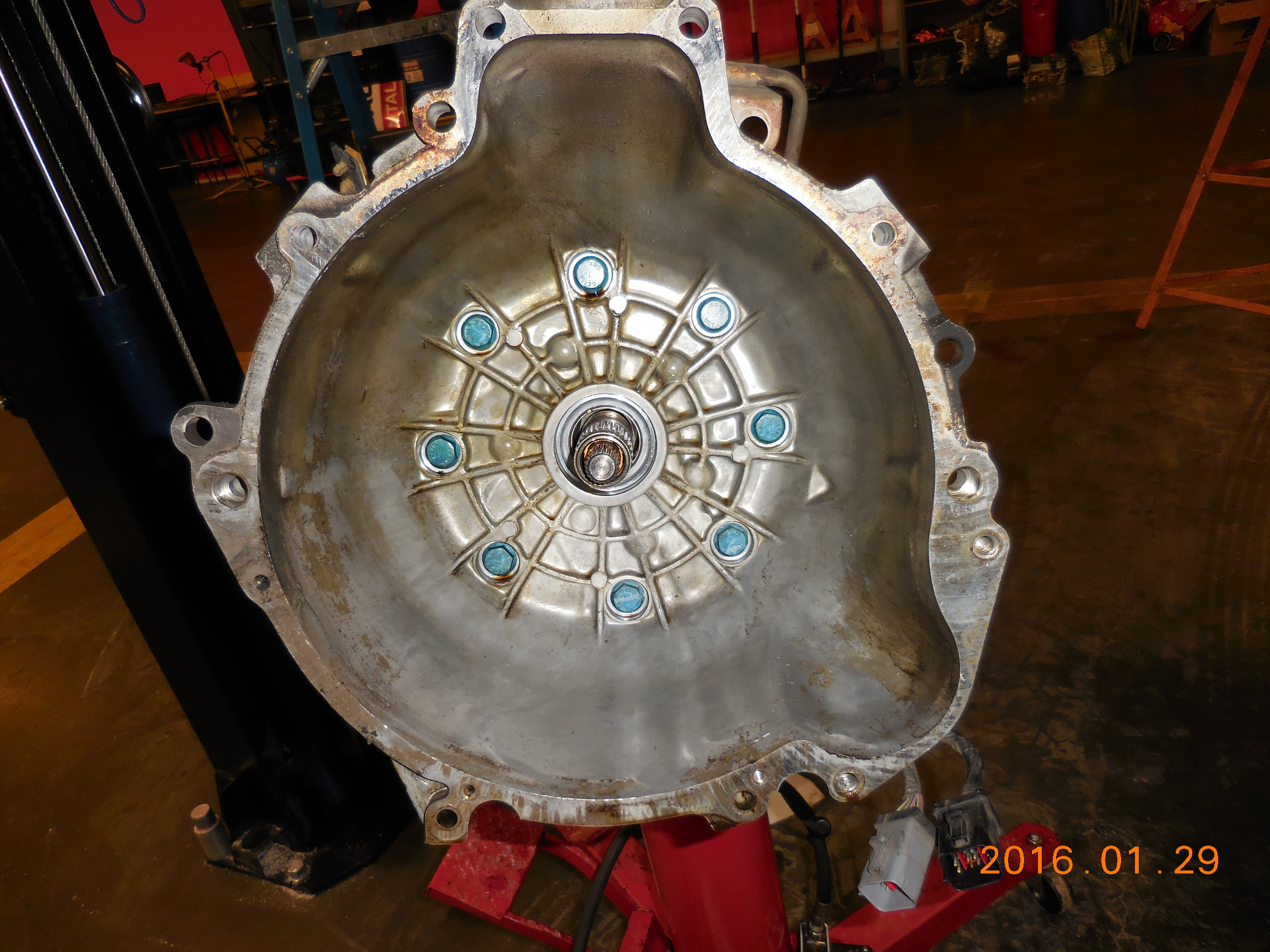 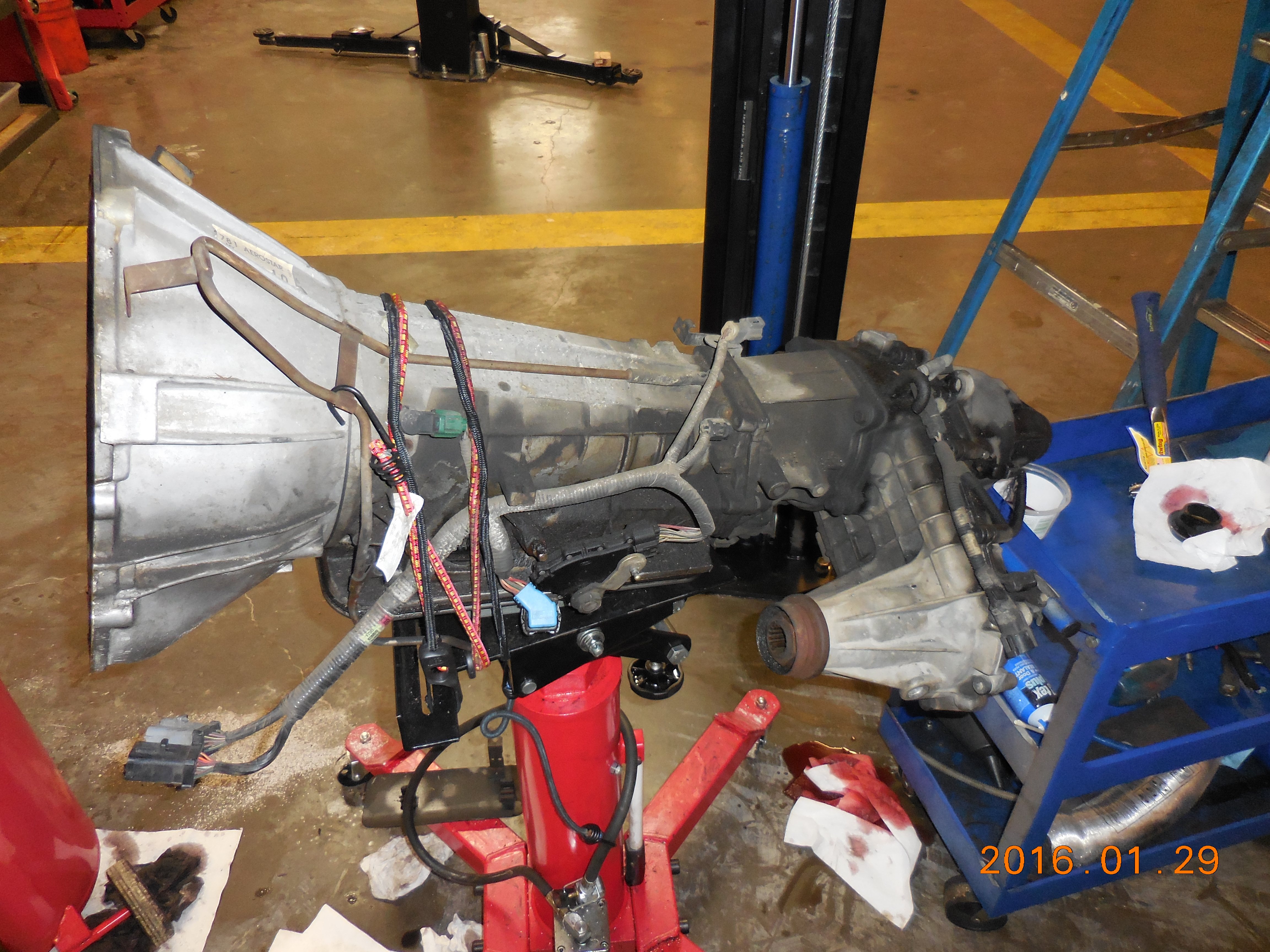 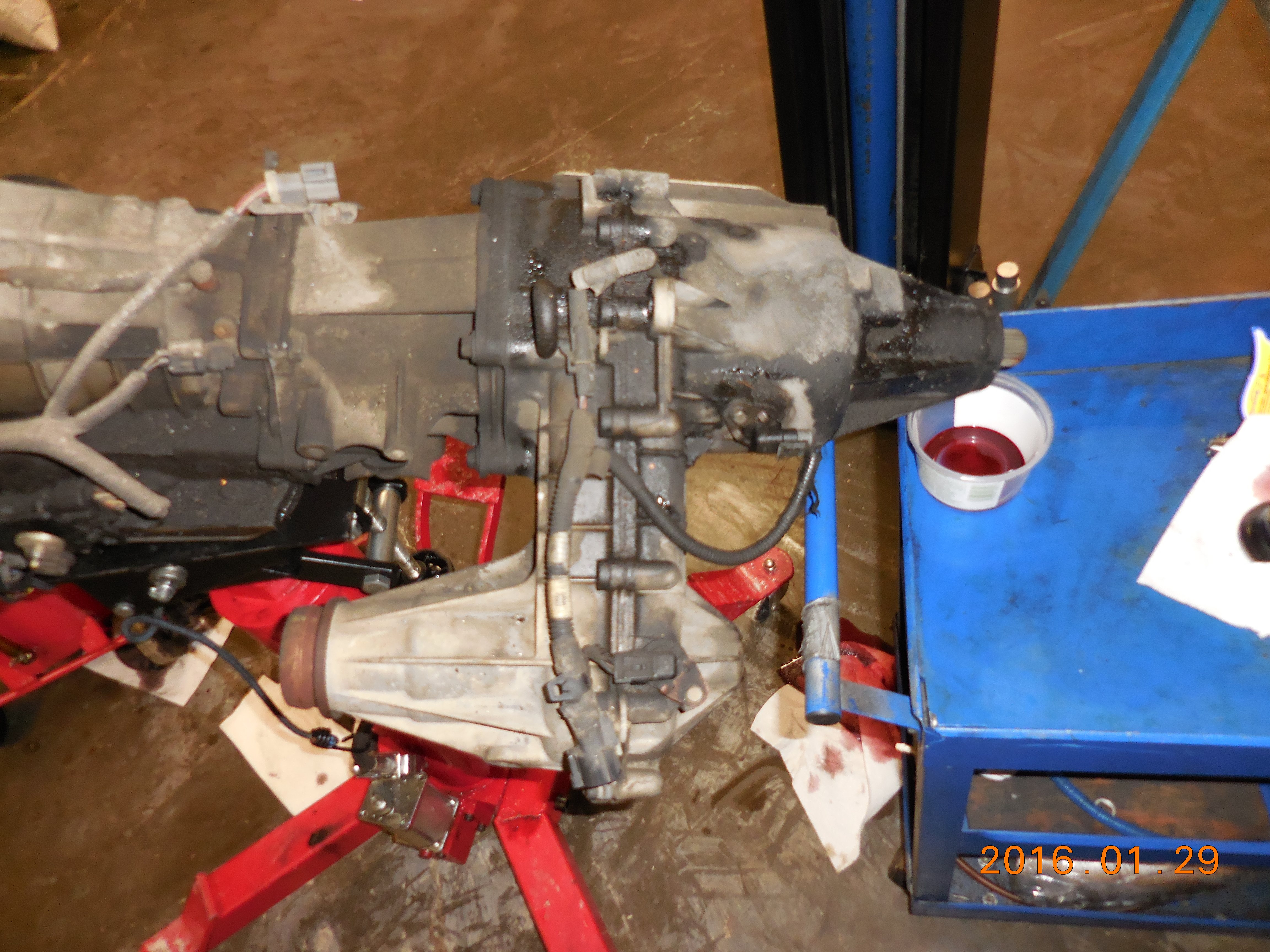 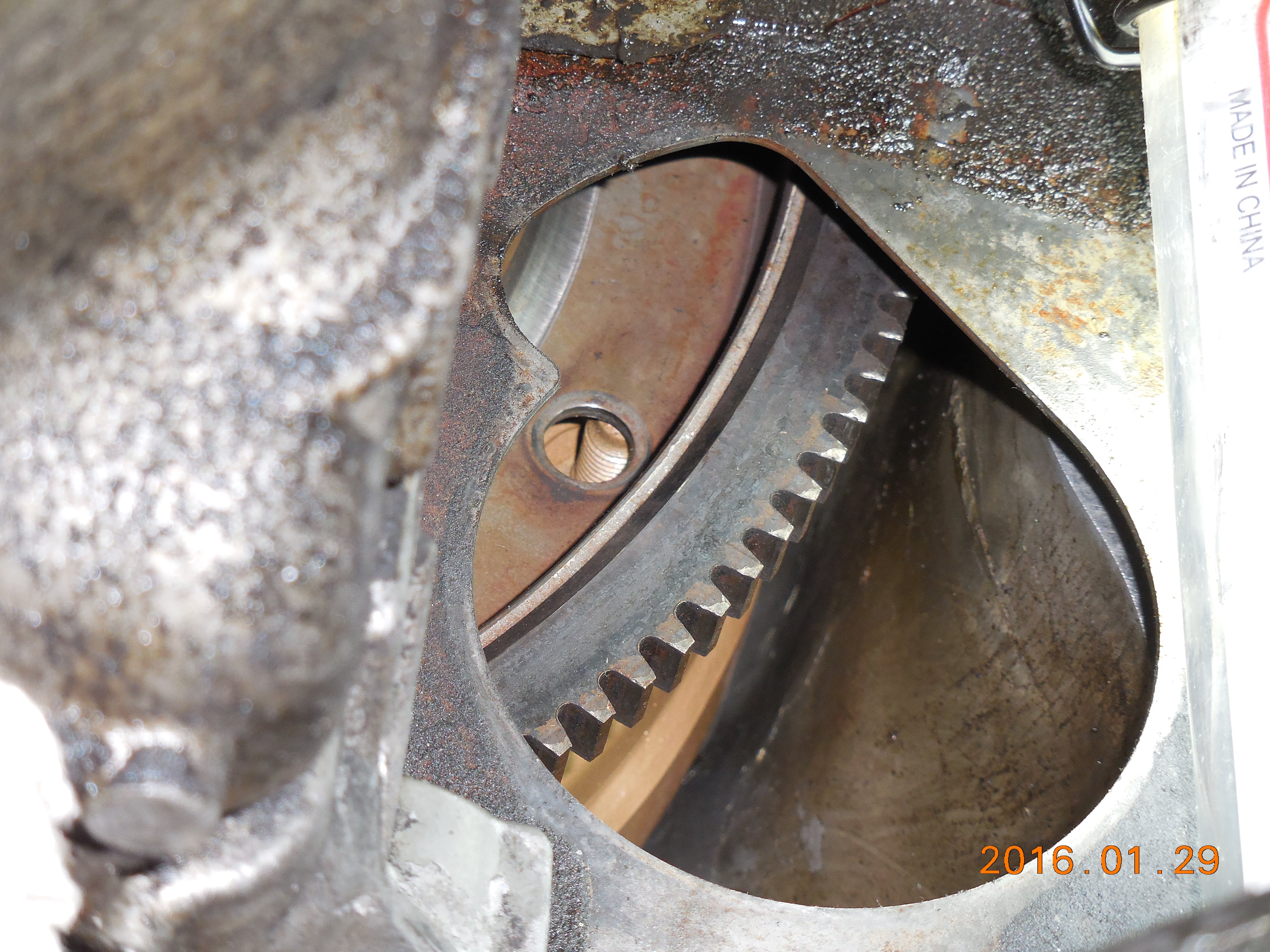 1997 Aerostar 4.0l OHV e4WD, torque converter stud to flex plate alignment through starter mounting hole. This is tricky to get aligned, and trickier to get the nuts tightened & torqued. Lots of ratchet extensions to the front to get around the front axle and motor mount, IIRC.
Trans_RR_2015_06b.jpg (2.42 MiB) Viewed 2583 times

What with the towing and travel time, this took two days, and though I'd wanted to replace the engine rear main seal while the trans was out, there just wasn't sufficient energy or time. I even had the sleeve kit and seal with me

by plenzen
So you didn't really "chicken out".
You just elected to not do it whilst lying on the floor.
Chickening out would be to get a transmission shop to do it for you.
Lying on the cold floor and doing this while being 1/2 century+ old would be just plain silly.

Good on you for tackling the job..........even in your advanced years

I have a 97 AWD T&C that I would really like to change the fluids in.
Chrysler in their wisdom did not put drain plugs in either the transfer case or the clutch drive thingy they have attached to it and the diff unit at the rear of the vehicle. Only fill holes to check level and add to if needed.
I will have to use a syringe or vacuum lift/venturi type of device to suck the fluids out.

by asavage
You could turn the rig on its side to drain the fluid. Gravity works

IIRC, there's a seal on the transfer case on your model that is something like 7 hours flat rate to R&R.

The transfer case on the Aerostar AWD is a Dana 28, and it has a nice, big drain plug.

The front diff on the Aero is a Dana 28 IFS. It has an aluminum case and no drain plug, and it's not really feasible to casually remove the front diff cover. I use the Mity-Vac on it. It doesn't hold much fluid.

Both the front diff & the transfer case use ATF as a lubricant.
All times are UTC-07:00
Page 1 of 2
Powered by phpBB® Forum Software © phpBB Limited
https://www.phpbb.com/