I couldn't find anything via Google on replacing the cells in a common power tool battery: the Sears/Craftsman C3 battery with Lithium-ion cells (model 11374, I think). I own four of these things, they run from $70-90 each new. 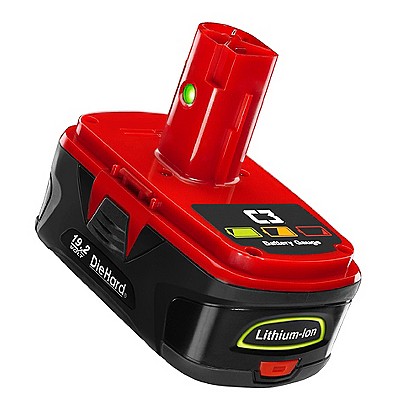 I opened one of these "rebuilts" up and found some rather messy work inside. After working with the guts, I now know why: they're hard to work with.

The cells in this "rebuilt" pack are of two different color shrink-wrap, leading me to suspect that this is a mix-n-match of used cells that may have undergone some kind of testing.

Anyway, I thought I'd try my hand at putting all-new cells in one.

Getting the top off is straightforward: 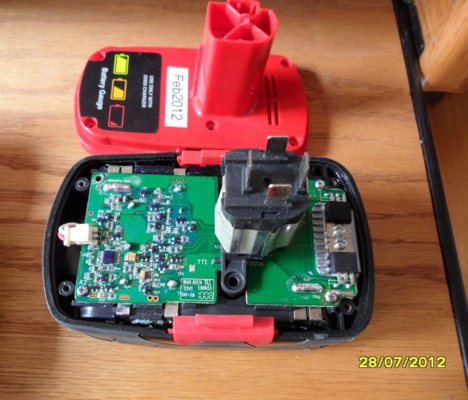 The circuit board has to be desoldered from the pack. 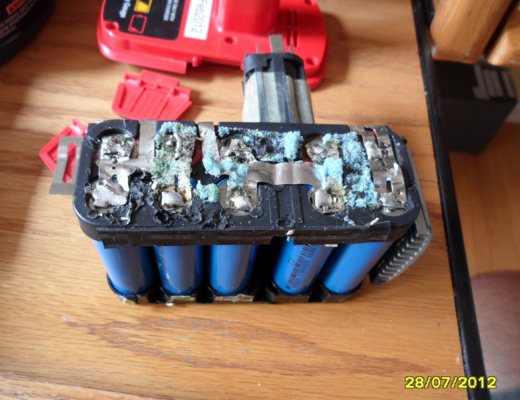 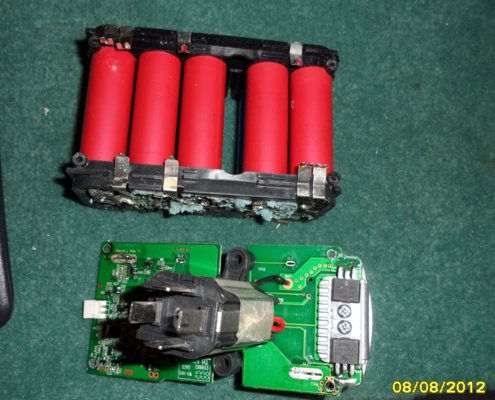 However, removing the cells from the pack is not fun. You never want to overheat cells, but a lot of heat was required to desolder the pack tabs. The tabs had been off before, so there was considerable existing deformation and excess solder on them, and removing them took quite a bit of work. I made a paper note of the polarity and orientation of all the batteries in the pack, prior to desoldering. 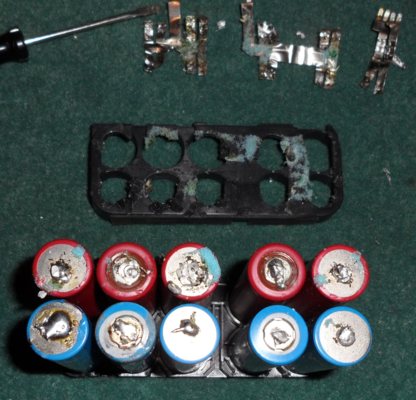 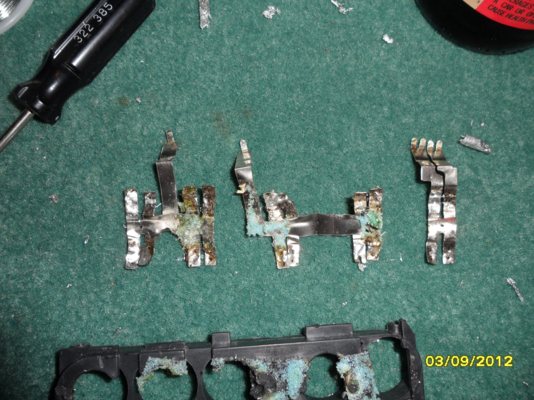 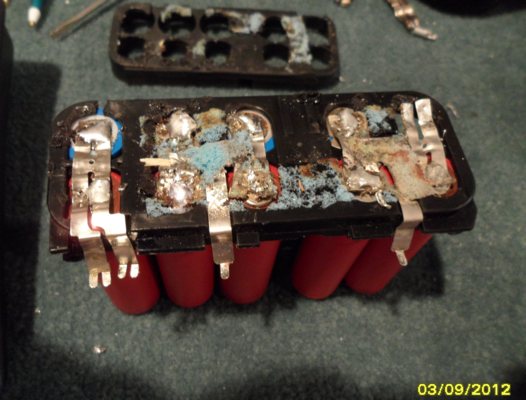 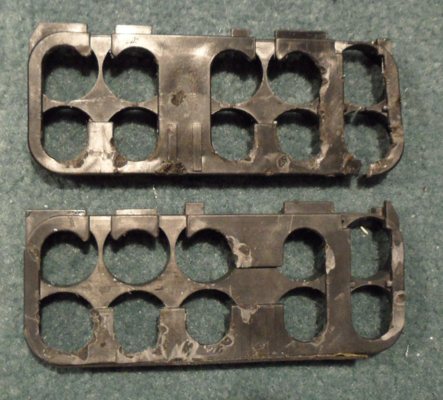 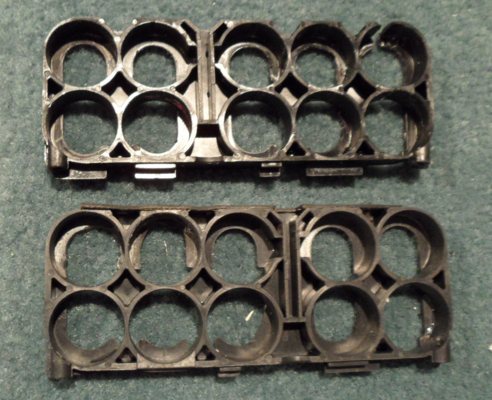 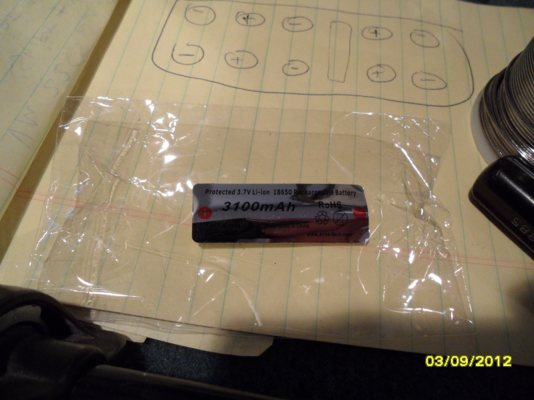 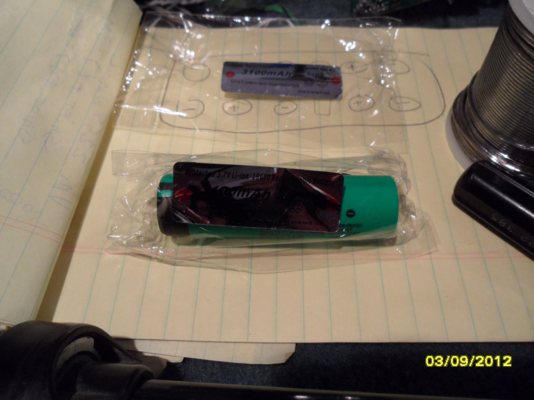 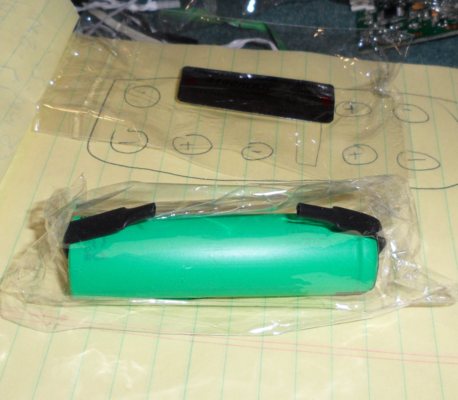 Assemble the batteries in the pack. 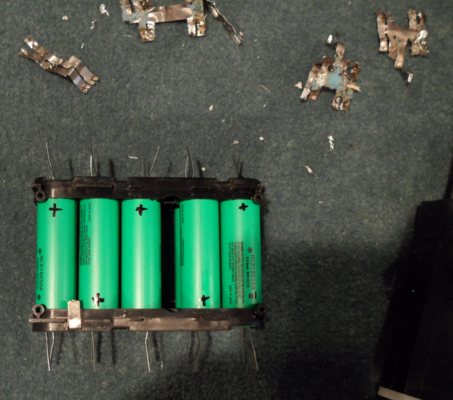 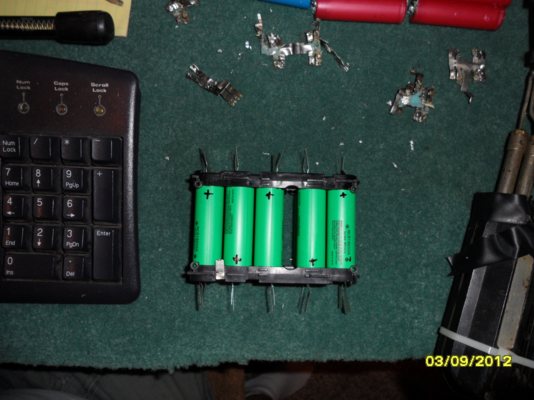 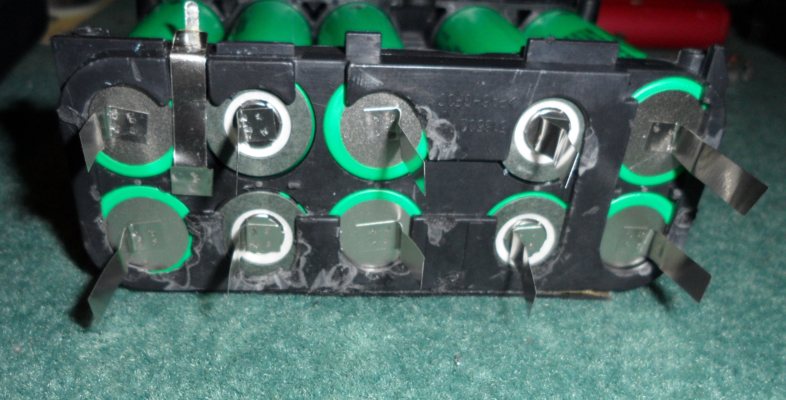 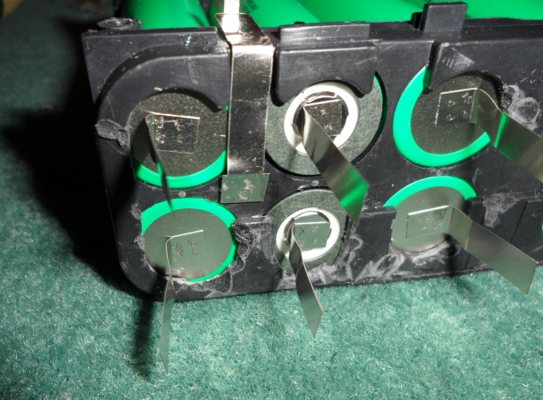 I had to trim off some of the pack tabs to be able to fold, fit, and solder the new cells' tabs to them. 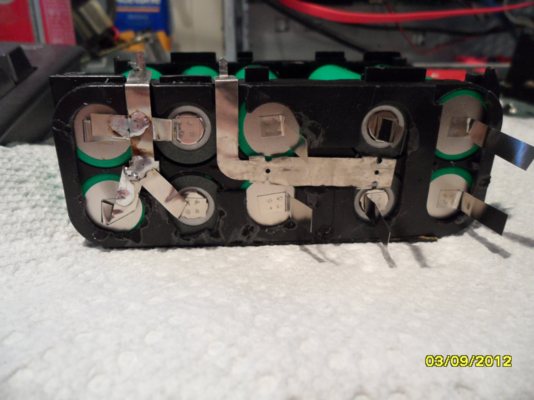 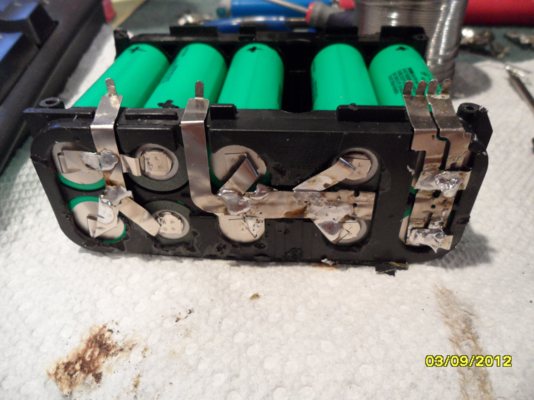 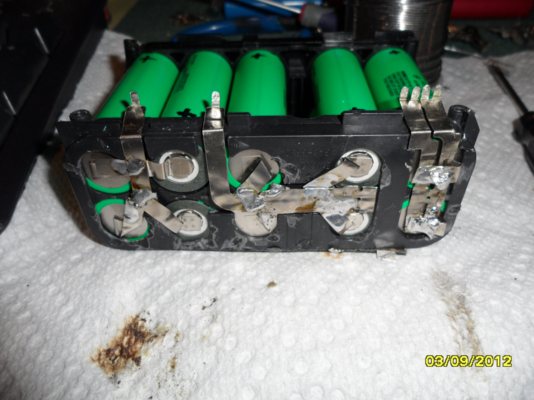 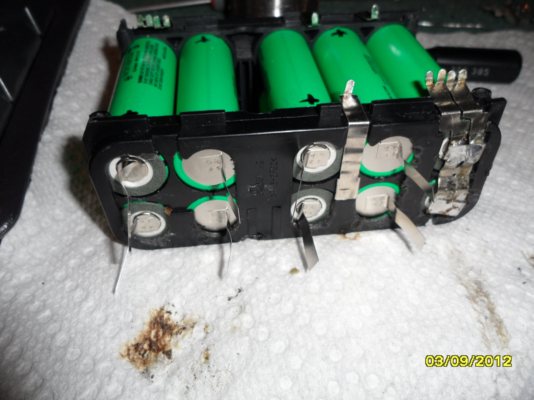 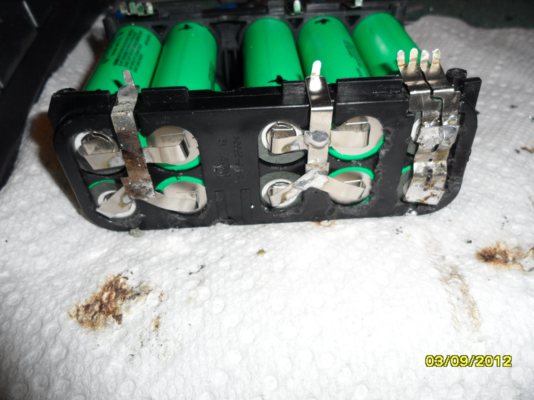 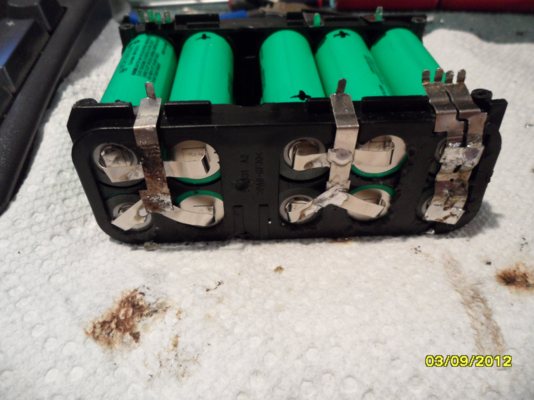 The assembled pack, ready to have the control circuit board soldered on. 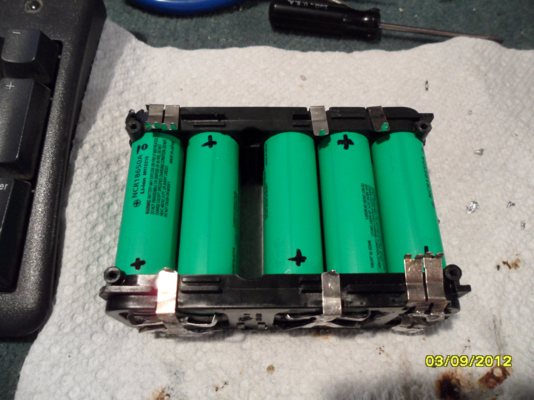 I've been using this rebuilt pack with new cells for about a month. I do not find that it has much more runtime than my other batteries, so I don't feel it's worth the expense of the 3100mAh cells and the considerable work to rebuild them myself in future. But as I couldn't find anyone else documenting doing their own rebuild on this pack, I felt it was worth trying.

If the cost of quality 18650 lithium cells comes down, perhaps I'd try this again, but it was a lot more work rebuilding these C3 Lithium packs than other packs I've rebuilt.
Regards,
Al S.

I am suprised you went to so much trouble and expense with this.
FYI - RIDGID has lifetime warranties on their batteries if you register the info on-line. The best warranty around for cordless power tools and batteries.
82 King Cab 2wd (nice)
82 Reg Cab (body damage)
Anderson , SC
Since Fall 2009
Top

Thanks for posting this, and for the detailed pics. The cells should never be soldered directly to, so seeing that was pretty shocking. I assume the "rebuild" is how that happened, but anyhow, here is the thing. The price from those cells is way too high, and that site is suspicious. Cells like that rarely perform as advertised unless they are genuine, such as being true Panasonic cells. Unfortunately there are tons of Chinese fakes who get a high capacity label, but not the same cell build quality. Further, they are rated at 1-2C, which is in line with the 4-6A listed on the site you linked. Cells like that are more closely intended for laptops or other low-power draw items. Looking a bit online, and using your pictures, the batteries should have a ~48 Wh capacity. 19.2V/6= 3.2V per cell. This matches the voltage for LiFePO4 cells, which are rated for much higher power draw, but have less capacity, closer to 1.1 Ah(since I'm counting 12 cells, the configuration must be 6S2P--> 6 serial 2 parallel, in order to make sense). So, I think they were intended to have LiFePO4 batteries. The difference between the 2 chemistries is substantial.
1. The cells you purchased are rated at 3.6V, and are normally charged to about 4.1V, and discharged to about 3.5V. LiFePo4 are rated at 3.2-3.3V, are charged to a max of 3.65, and usually discharged to about 3.0.
2. Rated output is considerably different as well. 4-6A continuous for those vs. about 15-30A for quality LiFePO4. Charging is a similar disparity.
3. Life cycle is another. Those types are rated for ~500 cycles, LiFePO4 is rated for 1200-2000.
4. Finally, safety. LiFePO4 are as safe as they come. Those other cells have the potential for thermal runaway, which is why you often see them listed as "protected", owing to a small circuit contained at one end of the cell.
I'll share the following experience with the two. I have a "48V" laptop type cell pack, and a "48V" LiFePO4 pack (A123s-- pretty much as good as they get). The laptop pack has more range, but drops steadily in power (~1500 watts draw down to about ~1100 draw). The A123 pack maintains its full power for the entire discharge, then drops off of a cliff when they're empty.
For future reference, you should be able to get decent cells of either variety for about $4-5/cell. I would suspect that if you tested the cells you purchased you would not see close to the stated 3.1AH capacity.
Thanks again for your detailed dissection. I hope your pack works well for you, but due to the differences in cell chemistry, I am curious about the longevity. One way to test is to test the individual cell voltage after charging. Good luck!
Top

Most interesting post. FYI Al uses this board to archive his projects with a string of messages and photos, but he might not actually visit regularly in between. I'm just acknowledging some good info in the mean time. I gave up the idea of rebuilding battery cartridges a few years ago just based on the ROI in time and effort but actual facts are always good to know.