Will soon look at '82 Maxima diesel

Thanks again. You've given me some hope that it may not need major overhaul after all. The other issues remain, but cosmetics don't bother me much if it it's generally OK mechanically.
Son reports by email he saw no sign of blue smoke at any time when he followed me, if that means anything, only the black smoke as I accelerated.
Son will see the woman at church soon and he plans to gently remind her she had told him she'd negotiate.
The plot thickens.
Ray Mac.
Top

A puzzling thing for me on this: The owner said she had a good spare to replace the flat tire. As I removed the lug nuts I saw they were a strange design. There was a sort of shoulder on them that came up against the wheel, instead of the conical type of lug nut I'm familiar with. Part of the nuts actually went about 5/8 inch into the wheel.
The bolt pattern on the spare wheel was right, but was designed for regular lug nuts--the nuts I took off would not screw on far enough, and would not have centered the wheel on the hub because they didn't have a conical side to fit the wheel. So I put the wheel back on and inflated the flat tire to take the trial run.
I'm not explaining this very well, but could I have used the spare wheel if I had had regular lug nuts?
Ray Mac.
Top

What you describe is the situation with the factory alloy wheels:

The lug nuts for the alloy wheels have a shoulder that is perpendicular to the stud. The spare is a steel wheel that requires the std tapered seat. I assume that the Sedan came with a set of four std tapered lugs for mounting the spare, in with the wheel changing tools (I have only Wagons). ISTR that the Owner's Manual mentions this, but the recall is foggy.
Regards,
Al S.

Thanks, very informative.
I didn't think to search for the spare lug nuts because i didn't know about them. She had the trunk so full of trash, as well as the inside of the car, that a search would've been difficult even if I had known what to look for.
BTW, the fact that she had not cleared her trash out, plus the fact that at the same time she proudly showed me that she had the cert. of ownership, leads me to think she had mixed feelings about really selling the car.
AND--she had first mentioned to my son a year ago about selling the car.
This may take some time, but I'll continue to work away at it
Obviously I have a lot to learn, both about her and the car..
Ray Mac.
Top

I assume that the Sedan came with a set of four std tapered lugs for mounting the spare, in with the wheel changing tools

I can probably answer this fairly easily. My 84s trunk is just about as close to untouched as you can find with a 22 year old car. Spare tire, jack, wheel chocks are untouched. The panel with the handle is still in place and the handle is attached.

It is dark now, but I will look in the morning. I never thought about it because I have always had a full-size spare in my trunk. I didn't even know they came with a donut before I saw one in the junkyard.

BTW, that is a very nice looking set of wheels!
Ben Martin

They give you a dirty little ziplock bag that has the word NISSAN imprinted on it, along with a little note that says you must use this while using the spare. It is in the left compartment with the jack and handle, its all the way on the bottom of that compartment so you may have to take the jack out to get it. I guess i could snap up some pics if you need them
'83 maxima sedan, l24e, a/t, black

It is dark now, but I will look in the morning. I never thought about it because I have always had a full-size spare in my trunk. I didn't even know they came with a donut before I saw one in the junkyard.

The spare wheel I'm talking about was full size but was a steel wheel that used standard lug nuts as Al says.
Ray Mac.
Top

Yes, but more or less a donut in my eyes when I am comparing it against the alloys.
Ben Martin

(I goofed here, may have done a partly finished postby mistake.)
Anyway, the spare wheel looked full size to me, and maybe when the car was used to pull a trailer they got a full size spare for it in case it got a flat while towing.
Ray M.
Top

I don't have the '82 OM handy, but the '83 OM shows the two different styles of lug nuts clearly in TWO different places, pgs 105 & 107, with repeated warning to use the correct lug nut for each style. It also says that the spare tire lug nuts are supplied, but not where.

Back to the Aero discussion and Al's recommendation to tow the car home if I get it .
As I think about it, it seems to make more and more sense to tow it, though I haven't given up on the car running well enough to drive it.
The thing is, I no longer have the option to do preparatory work at my son's place, and I'd like to work on it at home rather than in a supermarket parking lot. I now could sure use the Aero I gave away, since it would be up to the towing job and be useful for hauling other stuff.
BTW, there's an interesting thread on the FTE Aero forum about a guy who has a chance to get TWO Aeros for free in San Francisco. Both need trannie work, but the man who's writing about it has no place to work on them, same as me.
Maxima musing: I have to tighten and/or replace the alt. belt, can't drive it squeeking. Am wondering if tightening will aggravate the rumble I think might be a bad bearing somewhere
I didn't take a good look, but noted the alternator had a std. slotted adjustment on it, so wouldn't think it had a tensioner as well.
Wouldn't want to tighten the alt. belt, make a bad bearing worse, and have to abort the trip if I drove it.
Ray Mac
Top

Ray, beware of the loose alternator belt. I thought so too, on my '83 Wagon, but somewhere along the line the rearmost lower alt. pivot bolt got away, so the alt was retained by only the front lower pivot bolt and the upper, and this eventually broke the alternator housing off on the bottom (see the picture in this post).

On bearings: the bearing noise from something turned by the belts is most likely to be one of the two idlers (the PS idler or the A/C idler). I don't have the bearing number handy, but they're just plain ol' 6203 or 6302 or 6303 bearings, cheaply available everywhere for Chinese versions, a bit more for good ones. The alternator uses either the same size or one larger, but for some reason the idler brgs seem to get noisy first. With a suitable snap ring plier and a selection of large sockets (or a bench vise), you can replace the idler bearings in little time. 'Course, this is easier said than done, but they're a lot easier to replace than the alternator bearings. I think I've addressed some of the alternator issues somewhere else here, but the Hitachi alternators are not the easiest to service -- I just rebuilt one three or four months ago and it was neither easy nor cheap, but with the diesel versions (with the unique rotor and rear housing) there was no good alternative IMO.

I even built a test bench to run it up to speed to load check it (click on any image for larger): 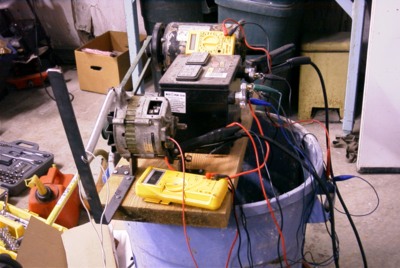 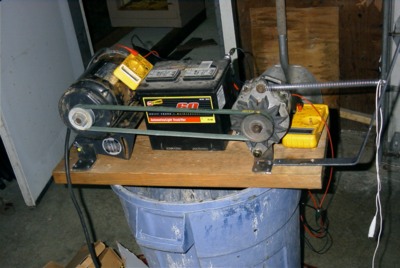 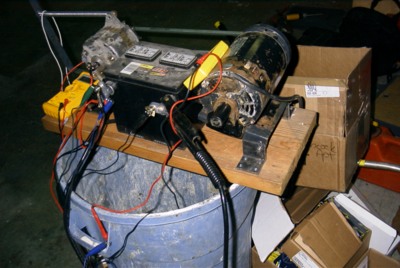 That rig uses my old Craftsman table saw motor, which is easily moved from one to the other. It doesn't have enough HP to really run the alternator under full load, but it's close enough for what I want to do.

With that many clip leads running around, I had to think hard about what I was doing. It worked out quite well though.
Regards,
Al S.

Thanks again, Al, for your patience with this old guy, and the details & links you've provided.
So it sounds like the loose belt might be the result of of the bracket rather than improper adjustment?
Separate from that, and remembering another thread about the diesel with 2 alternators, one of them dead:
Early Chevy Cavaliers had an electric vacuum pump under the battery tray. Couldn't one of those be hooked up on a diesel and that would allow the use of a more easily available alternator? I know that there are electric pumps that are used on hopped-up engines (gassers) to compensate for poor vacuum at idle, but they're expensive. JY pump makes sense to me if it would work.
Ray Mac
Top
Post Reply
54 posts