Tow hitch on a sedan?

Tow hitch on a sedan?

does anybody know if i can get a trailer hitch on the bumper of a sedan? Would it be possible to frabicate a hitch and bolt it up with the tow hooks eaisily?
'83 maxima sedan, l24e, a/t, black

I bought a bumper-mounted hitch (ie Class I) for my '82 Wagon about seven years ago. I had it mounted professionally, because I didn't have a lot of spare time at the time, and the price quoted was cheap.

I was expecting a style of frame hitch, and was really dissapointed. I've never mounted a ball on it. I don't think that the Sedan and Wagon rear bumpers are so different that a hitch made for a Wagon wouldn't fit on a Sedan.

As for the tow hooks -- those aren't really tow hooks, they're handly places to strap the car down in transport. I wouldn't use them for tow duty. If you get a sharp load on them, they'll come off. I want through-bolted members for serious towing. I use a Class III hitch on my Aero (one I modified from a JY rig, with doubler plates inside the frame, had to peel back the carpeting and use a Sawzall for that) to drag all those cars around, and I've had situations where I was damn glad I made the extra effort.

Moving the cars with the little Aero works OK, though it's not a powerhouse and braking is definitely on the weak side in wet weather. However, I've also dragged my '20 travel trailer ten miles (it weighs about 3500-3800) and it's an unsuitable arrangement. Even on the flat, the power is marginal (too much frontal area, I assume). The 3.0l V6 is rated at ~130 HP. The LD28 is ~80 HP, and that's assuming full accel; I'm embarrassed to run my Maxima with my foot on the floor for more than a few seconds. The L24E is ~120 HP.

About six years ago, I gave a friend a ride to Spokane to buy a motorcycle which he rode back to Seattle. On the return leg, I was determined to keep up with traffic, and I kept my foot well in it. The black smoke in the RVM was astounding at altitude!
Last edited by asavage 13 years ago, edited 1 time in total.
Regards,
Al S.

The australia factory tow hitch[tow bar] replaces the bumper mounting brackets and tie downs.
A 2 inch steam pipe fits neet inside the bumper with the gooseneck hanging out under it on 2 bits of flat bar.[trapezium box shape]
these are rated no trailer brakes 800-1200 KG.

the tie down bracket are normally removed then the bumber bolts to the new bumper mounts tow bar assembled then refits into the chasis rail,later models with 4 bolts inside the trunk[boot] and the tie down points.

just thought i add.
for my R31 skyline wagon,the aftermarket tow bar is a pipe with 2in angle at eack end.this bolts with a special washer to the tiedowns.

in the middle the goosneck[bolted] mounting is weilded to 3/4 pipe bolted to the reinforced floor above the axle.

this sounds like a hard process, im not too sure if im really up to it, but then again i really want a hitch
'83 maxima sedan, l24e, a/t, black

kassim503 wrote:this sounds like a hard process, im not too sure if im really up to it, but then again i really want a hitch

What do you want to drag?

If a small utility trailer, the Class I bumper hitch (bolted on to the bumper) is adequate. Up to about 1000 lbs -- I don't know that I'd go as far as 1500, but ISTR that that is the Class I spec. Oh, heck, why not Google it . . . OK, Both Draw-Tite and Reese list Class I as 2000 lbs. I personally wouldn't tow 2000 lbs with a bumper-mounted hitch of any style except a full-steel truck bumper without 5 MPH mounts. I've had several tow-hitch mishaps over the years, and they've tainted my bumper-mount-hitch theories.
Regards,
Al S.

i apoligise as there will be lot of incorrect grama and spelling mistake.
im dislexic and do this when i should be a sleep.
silly loads

i was thinking of hauling one of those little trailers for wood like plywood, that im sure ill have no problem doing if i mounted a bumper hitch to it.

I also would want to tow a car that i race at a nearby raceway (which is 40 miles of highway driving away) and i really dont think a bumper style hitch would be able to handle the car dolly and those class I hitches really look pretty flimsy, i think a class 3 is needed for them anyways

Al, these mishaps with the tow hitches, do they involve something spontaneously snapping off and losing the load, or do they give some kind of warning with something bending first? if i do install a hitch i really dont want to have a runaway car on my hands.
'83 maxima sedan, l24e, a/t, black

I've had both occur. I've had two bend -- this was in the '70s, I was pretty young and didn't know limits from squat.

Over in another thread I described a borrowed util trailer's tongue breaking and popping the tongue up, and then it ran into the back of the tailgate and put a hole in it.

I had a hitch weld crack in Yreka, CA on Father's Day weekend 1980, right after Mt. St. Helens blew, try to find someone to weld something in a town you don't know on a holiday Sunday.

Definitely wouldn't tow dolly behind a Maxima, not enough weight. I've got a couple thousand dolly towing miles, have scared myself silly a couple of times, and the Class III has given me no grief. But I did prep it very well.

Safety chains do work. I know, because I've had to pull over with the tongue dragging. Not recently, Thank God.

For small util trailer, bumper hitch is fine, but maybe not one of those converted truck beds whose frame and diff and bed weigh 1200 lbs without a load!
Last edited by asavage 14 years ago, edited 1 time in total.
Regards,
Al S.

I bought a universal trailer hitch off ebay (auction link) Pretty cheap and its rated for 3500 lbs.
When I install this I want to reinforce the bumper and all the things its connected to, according to the manual its 1000lbs max, and its good practice to make it as strong as possible.

Im thinking of some giant pieces of angle iron for the hitch and box steel to replace the plastic honeycomb under it. Also I might want to either fabricate or put something in the area where the bumper is mounted to the car for extra strength. I guess I might, just might, violate local laws by getting rid of the bumper honeycomb, but I doubt anybodys looking, and I can really go for the extra strengh in a rear end accident (Ive been in 2 in the past few months, onslaught of guidos and young kids tearing the streets up is ruining long island)
'83 maxima sedan, l24e, a/t, black

Oooops, well taking the bumper assy off was going great, until the last bolt. Its those kinds of bolts where the nut isnt welded to the piece that im taking off and I cant get a socket on the nut, but I can see it visually. Anybody think just welding the nut down as best I can would work? There is alot of rust and my welder puts out a very little amount of amperage, but I think I can weld it down and loosen the bolt. I cant wait to have a hitch on my car, its the only downside I see with owning a sedan instead of a pickup.
'83 maxima sedan, l24e, a/t, black

I finally got the bumper off, I wound up welding the nut to a neaby surface so it didnt slip when I unbolted it. Hopefully I will be done with the project tommorow. When its done I would be pretty positive that the bumper is ready to carry stuff over its 1000 lb limit (according to nissan).
'83 maxima sedan, l24e, a/t, black

Its all done, hitch is on and seems to be ridgid- I put a bar in the reciever and jumped on it a bit and it didnt budge- I weigh 200-210 lbs.

All I gotta do is wire up a 4 pin connector and itll be done!

Im interested in making one of those trailers out of a compact pickup- Like that orangy dodge rampage that was in one of Al's posts. Anybody know how much itll cost me to make that? Im trying to see which one would be the best with the functionality vs price. Also if I had one of those pickup trailers I would be the first on the block to have one

All Nick did was shove some square tubing into the cut-open rocker panels, then add a bunch of bracing. If you want, I can go over to his place and take some close-ups. 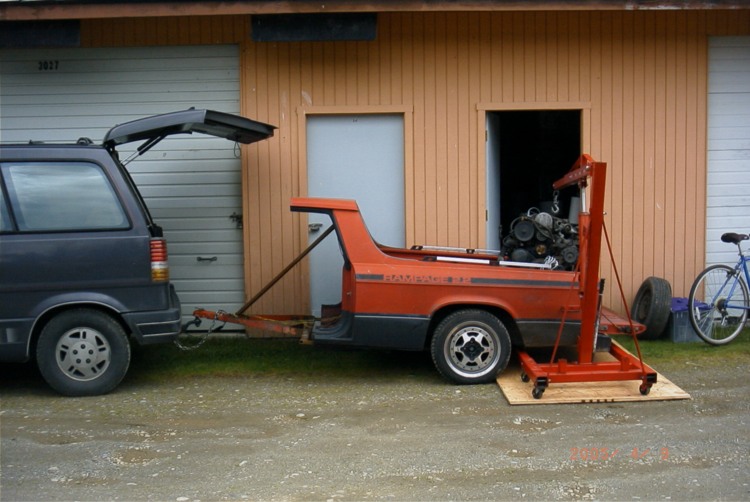