PexSupply sent an email asking me to help with a customer's request for pics of this unit, so this is my attempt. 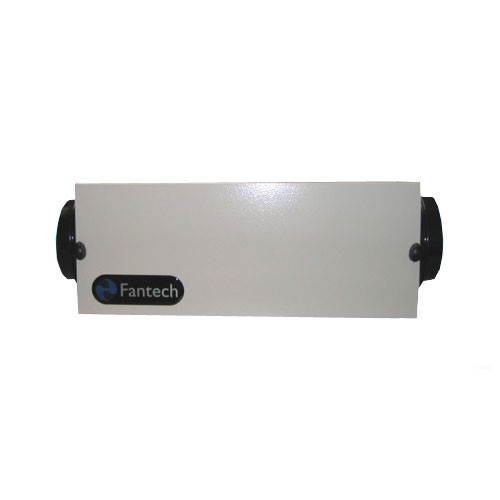 The FanTech FB6 is an inline air filter with 6" diameter hose connections. I bought one in Mar2012 and installed it in our (legal) marijuana grow room to keep bugs, dust, and assorted crap from mucking up the ducted light hoods. You move a lot of air to keep 2kw of metal halide or high pressure sodium lamps cool enough to survive, and even a little dust or a few bugs really makes a mess in the hoods.

This $81 box from PexSupply looked like just the ticket. The nicely gasketed front cover comes off with two thumbscrews, to reveal the 10x20x1 MERV 12 filter.

The construction is sturdy and the finish is professional and good-looking.

However, I do have a few nits to pick.

One is that, for a device that's designed to filter air, it has quite a few areas that I had to caulk up. If light comes through to the inside, so does air. I had leakage both at metal seams, and at corner breaks: 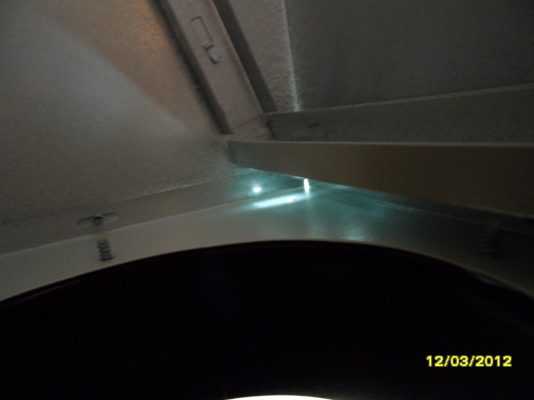 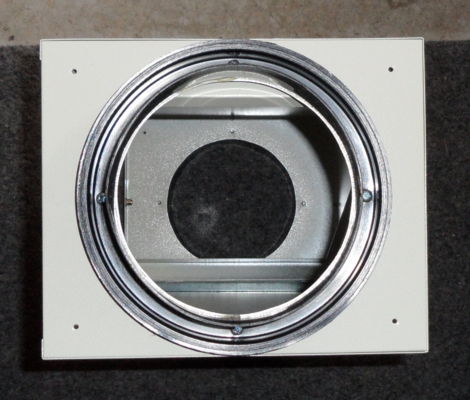 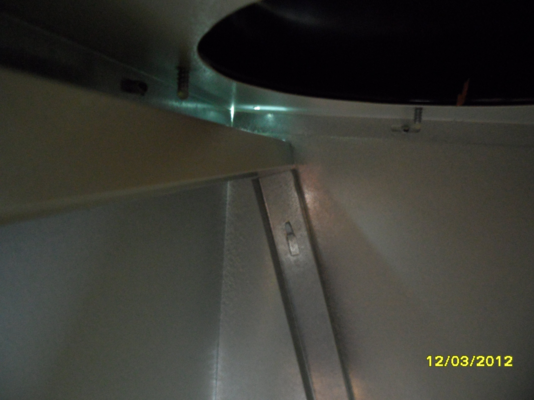 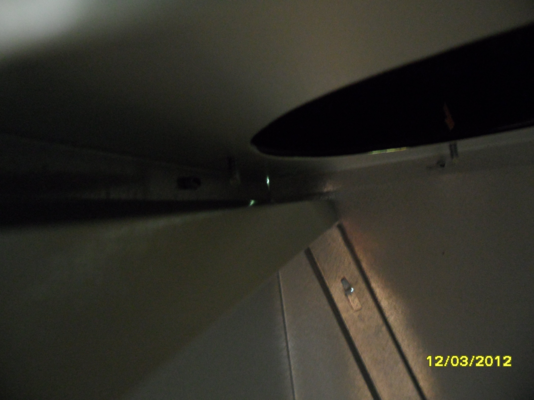 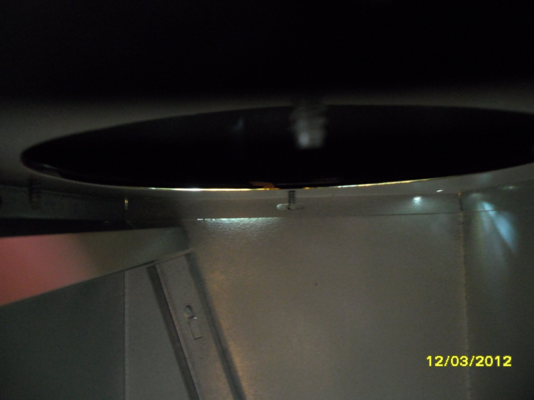 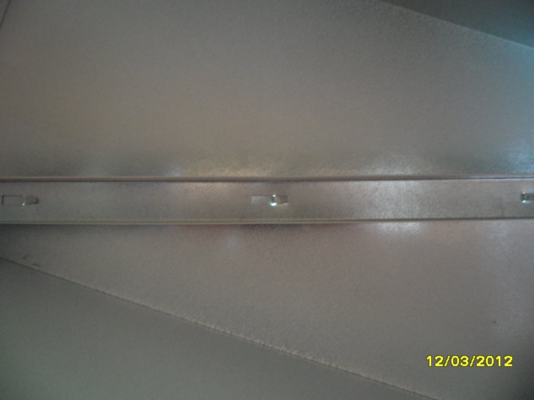 The major quality problem I found with this unit is the mismatch of the channels that guide & retain the 1" filter. Take a look at the second picture below. That's not parallax error, that's a channel mismatch of something approaching 1/8" ! The filter just would not fit in well until I bent that channel up something fierce. A real shame, because overall the chassis is a nice piece of work. 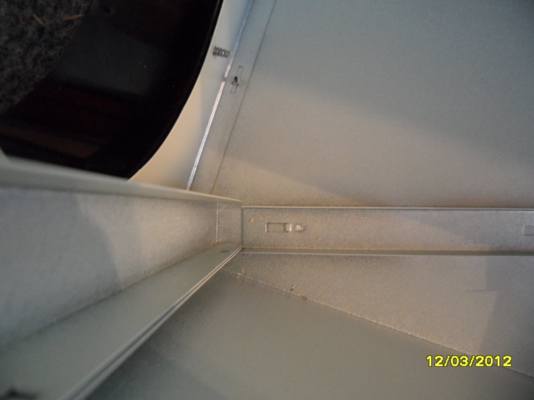 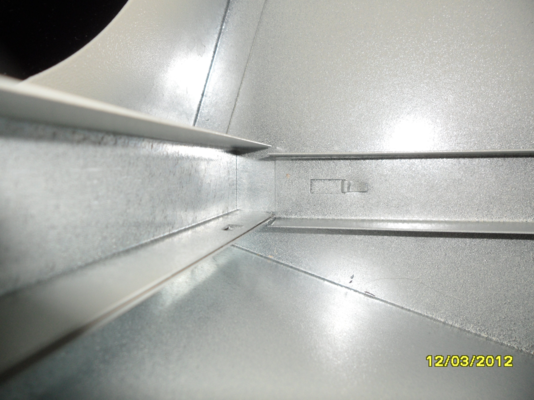 There is some assembly required: you get to screw the plastic 6" duct adapters to the chassis, and I'm not very impressed with the supplied setup. The plastic adapter's flange is too flimsy to be mounted with only four sheet metal screws, and I found a lot of air leakage where it mates to the chassis. And if you tighten the screws a bit too much, the flange deforms easily and badly.

My fix was to run eight screws in, instead of four, and to use silicone between the surfaces before mounting. That worked well. 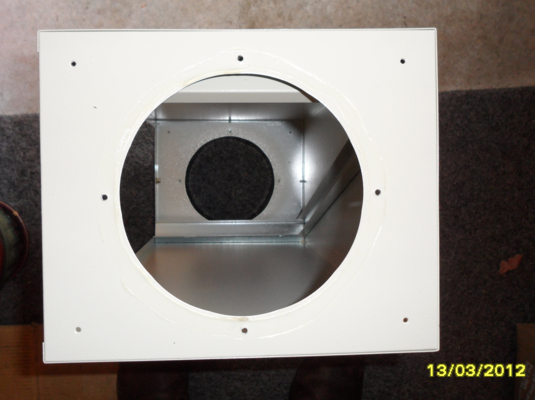 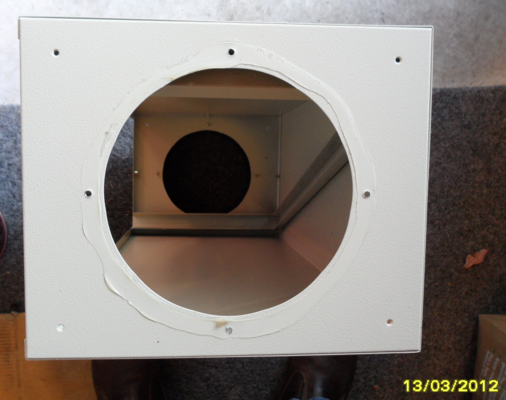 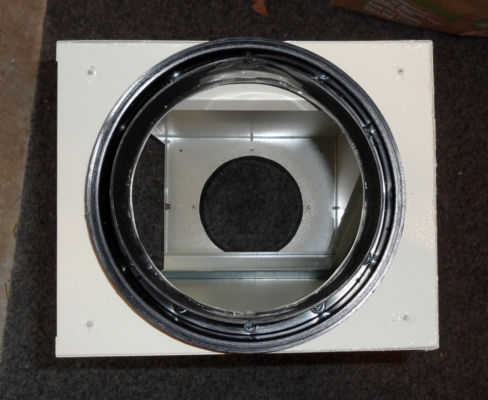 I'm not unhappy with the unit, when all's said & done. I drilled four holes through the back and screwed it to a wall in our garage, and it worked very well after the mods above, for the one grow I used it (I've since packed it all up, since we can now buy the stuff legally for not much more than it really costs to grow it, and the quality and variety we're seeing is better than our homegrown stuff. I do miss the green smell, though.). I found many many bugs in the filter after four months runtime, though not much dust. The hoods stayed much cleaner, and that was the result I was shooting for. I bought a spare element from PexSupply but never needed it.

When I was doing furnace cleaning/servicing we used that foil tape with the removable paper backing to expose the sticky portion to seal up things that you are describing.
Duct tape works for everything else other than ducts. The glue dries out and it falls off.
The foil tape works the best and with heat inside the ducting the glue gets stickier.
No stink from the caulking setting up either
Retired Pauly
Problem with being retired is that you never get a day off.
1987 D21-J SD25 KC
KJLGD21FN
Top

I like the foil-backed adhesive tape, but this thing is exposed and I like to show off. It was in the garage, right where it could be seen when opening the door to drive in, and ductwork went around to the grow room. So, after paying whatever for this thing, I still wanted it to look nice. I like RTV for this kind of work. I was a bit disappointed that an air filter housing would be this leaky. They could have paid their janitor to moonlight an hour a night and run a caulking gun over the stock to be shipped out next day.

And the mismatched channel/guide for the filter is just inexcusable. That unit should have been rejected.

It's built nicely, other than that.

Yes, gray duct tape is not for ducts. I hope everyone knows that by now.
Regards,
Al S.