I don't even know what your post means, but thankyou for keeping this site going. wayne
I know the voices are not real,
but they have some really good ideas.
Top

Me thinks that Al's real name is Prot.


Thanks for keeping us alive Al.
Retired Pauly
Problem with being retired is that you never get a day off.
1987 D21-J SD25 KC
KJLGD21FN
Top

asavage wrote:Every so often -- measured in months -- the N4100Pro will lose the old LanMan password and while the 'asavage' user is still showing in the NAS' web interface, the OS/2 box cannot log in to it. That means no backups happen. As of today, this has happened twice (in about six months).

It happened again, sometime in the past week. That script saved my bacon; it's so much easier to fix this when I take good notes!
Regards,
Al S.

Although undocumented, the N4100Pro seems to work OK in RAID1 with 8TB drives.

Thank you.
Retired Pauly
Problem with being retired is that you never get a day off.
1987 D21-J SD25 KC
KJLGD21FN
Top

I try to rotate out hard drives every couple of years. The N4100Pro got twin 8TB drives (RAID1) two years ago, and I decided to change to twin 16TB drives last week (got a deal on them). House backups are using space, what with video & such, and it seemed a good time to gain some.

I used the same procedure as last time: pulled out one 8TB drive, plugged in a 16TB drive: wait around two days to resilver the new drive. Repeat for the second drive. Then tell the NAS to expand the RAID to use the new space. While it takes a long time, it worked fine (again).

Long-term, this N4100Pro will probably become a backup store. Now that Ubuntu has integrated ZFS as a kernel-space filesystem (instead of the user-land FUSE method they'd been experimentally using for years), I don't see the need for a dedicated ZFS NAS anymore, and I'll likely just use the main webserver as our house NAS as well. I don't need the horsepower of another Dell T7500 just to hold up a NAS, when the webserver HP Z620 would handle the added load of being a NAS just fine.
Regards,
Al S.

I purchased a "spare" Thecus N4100Pro. It arrived without login credentials, and I was able to glean info from the 'net to reset it to defaults. Not easy, because this model does NOT have a hardware reset button.

After a lot of effort, I was unable to convince it to accept a firmware upgrade to 5.03.02.8, the last available firmware for this model. At the GUI, it would churn for a while and eventually yield an error.

These units store their OS on a DOM: Disk on Module. It's a type of flash storage or SSD, which uses the 44-pin IDE connector, as do most 2.5" laptop hard disks. I ended up cloning the DOM from my "old" N4100Pro to my new one, side-stepping the problem with the OS itself rejecting the firmware upgrade.

This wasn't easy enough for me to make good guesses, and there's surprisingly little good info available on this via Google. Most information assume you'll be plugging the DOM into a suitable mainboard and reading/writing to it from there.

I use a $40 StarTech USB to 2.5"/3.5" SATA/IDE all-purpose converter (USB3SSATAIDE) for a lot of HD and SSD cloning and upgrades. I've used this thing for years, and it's great for this kind of thing. Problem is, DOMs have a 44-pin female connector and 2.5" hard disks have a male connector. The mismatched gender thing threw me for a long time. I kept staring at the connectors and failing to see how to mate them correctly.

"Gender changer", you say? Not so fast. You cannot just use, say, a header row of straight-through pins (I tried: smoke!). Here's the N4100Pro DOM: 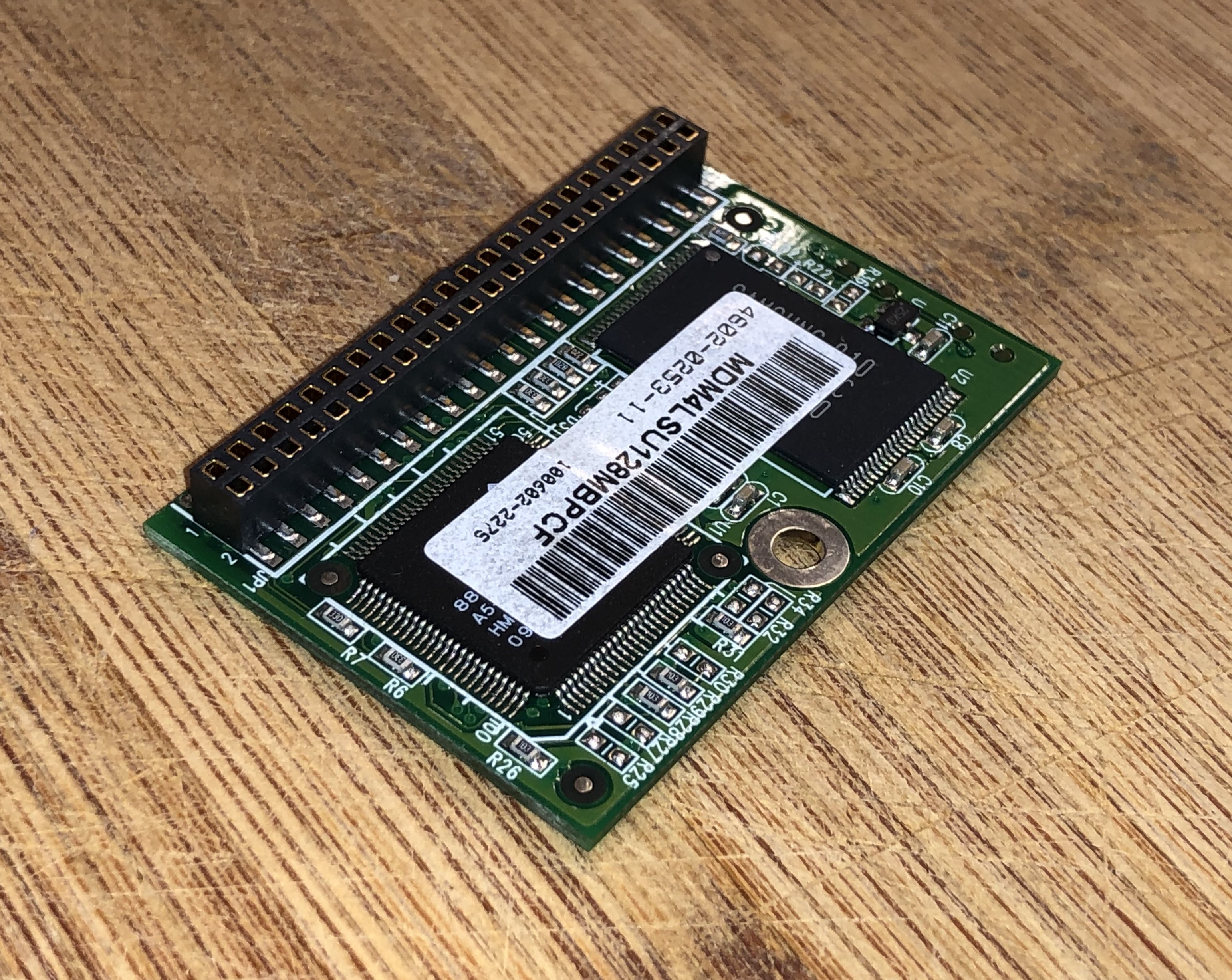 
Look at a typical 2.5" 44-pin HDD's pinout, and how it mates to the StarTech Converter: 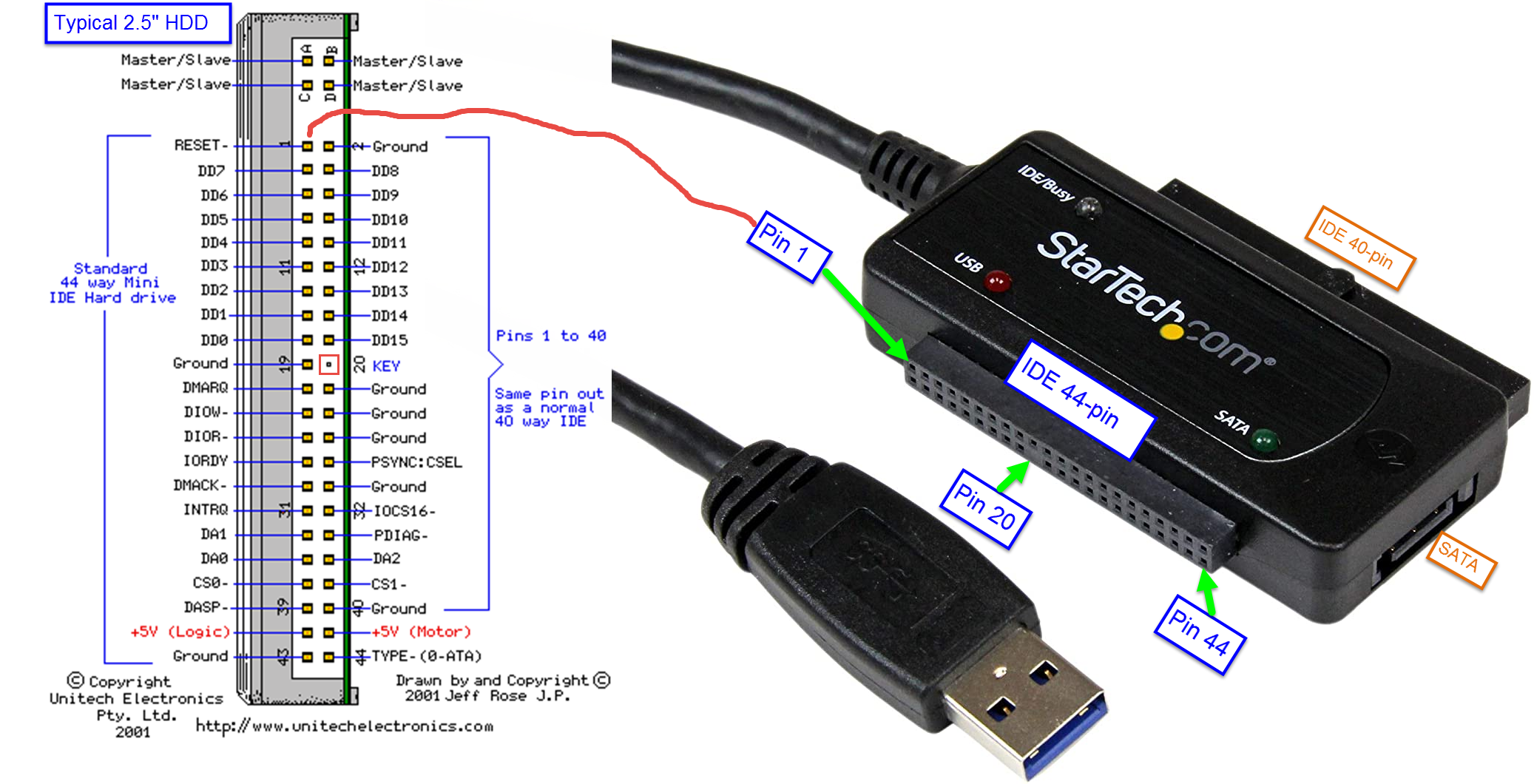 
But Pin 1 on the DOM is on the wrong row. On this DOM, the top & bottom rows are reversed from a standard 2.5" HDD, AND the solder pads on the back of the DOM are also reversed. Tricky.

The way to connect this DOM to the StarTech Converter (or anything other than a mainboard that's wired for a DOM, I guess) is this adapter: Amazon JXSZ 2.5" IDE PATA DOM 44-Pin(43pin) Male to 44-Pin(43pin) Male IDE 44pin M-M Adapter 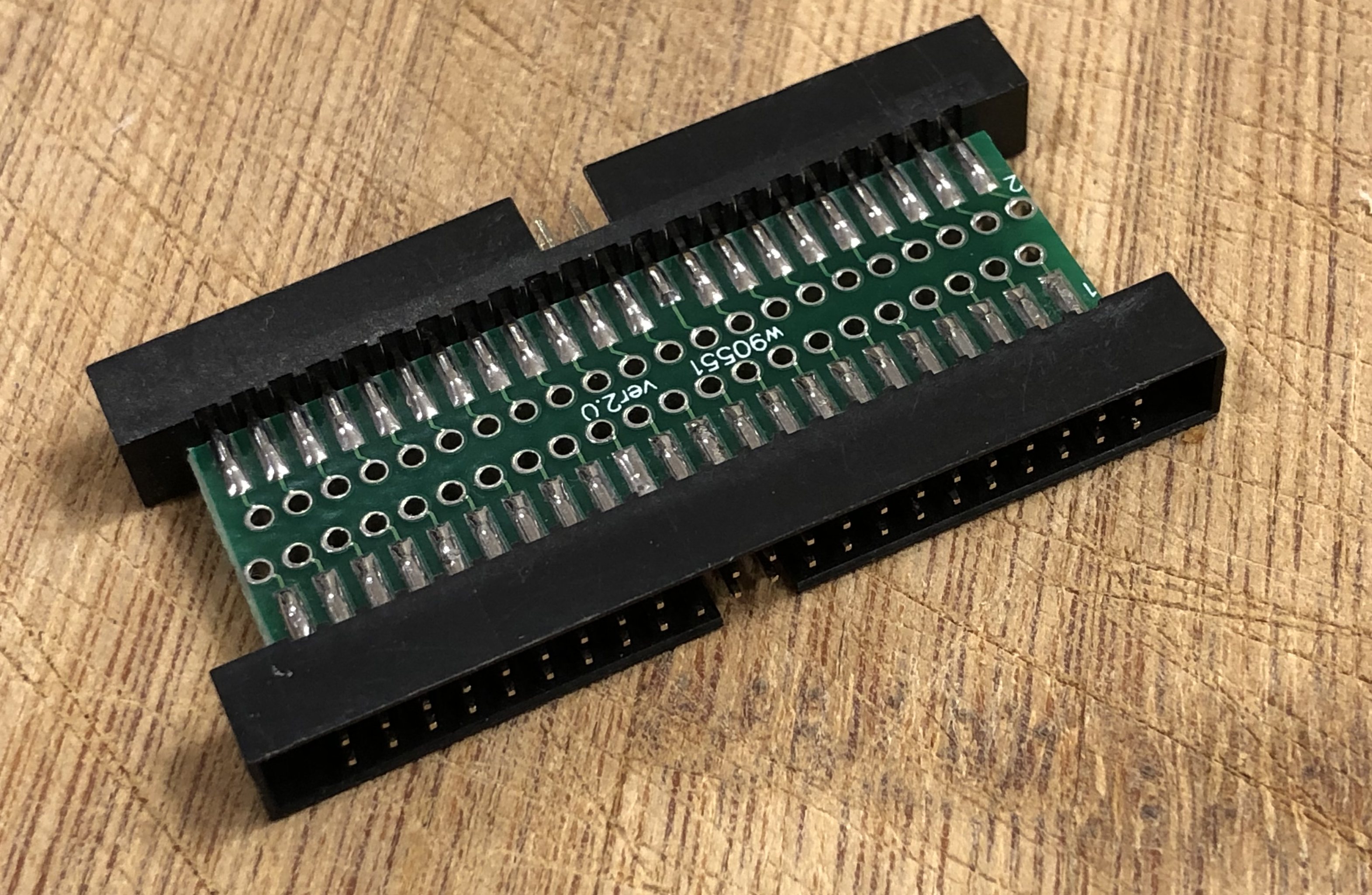 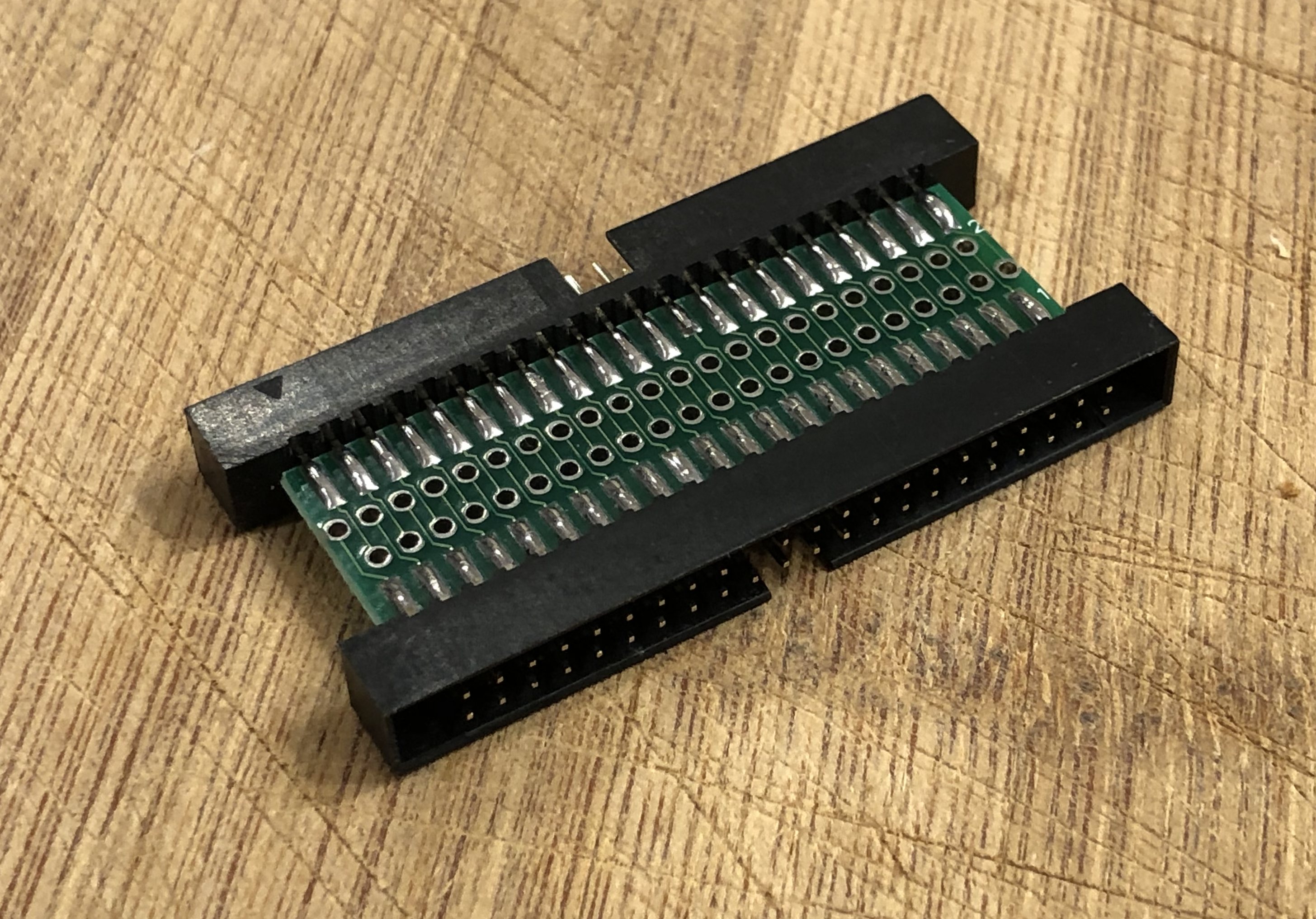 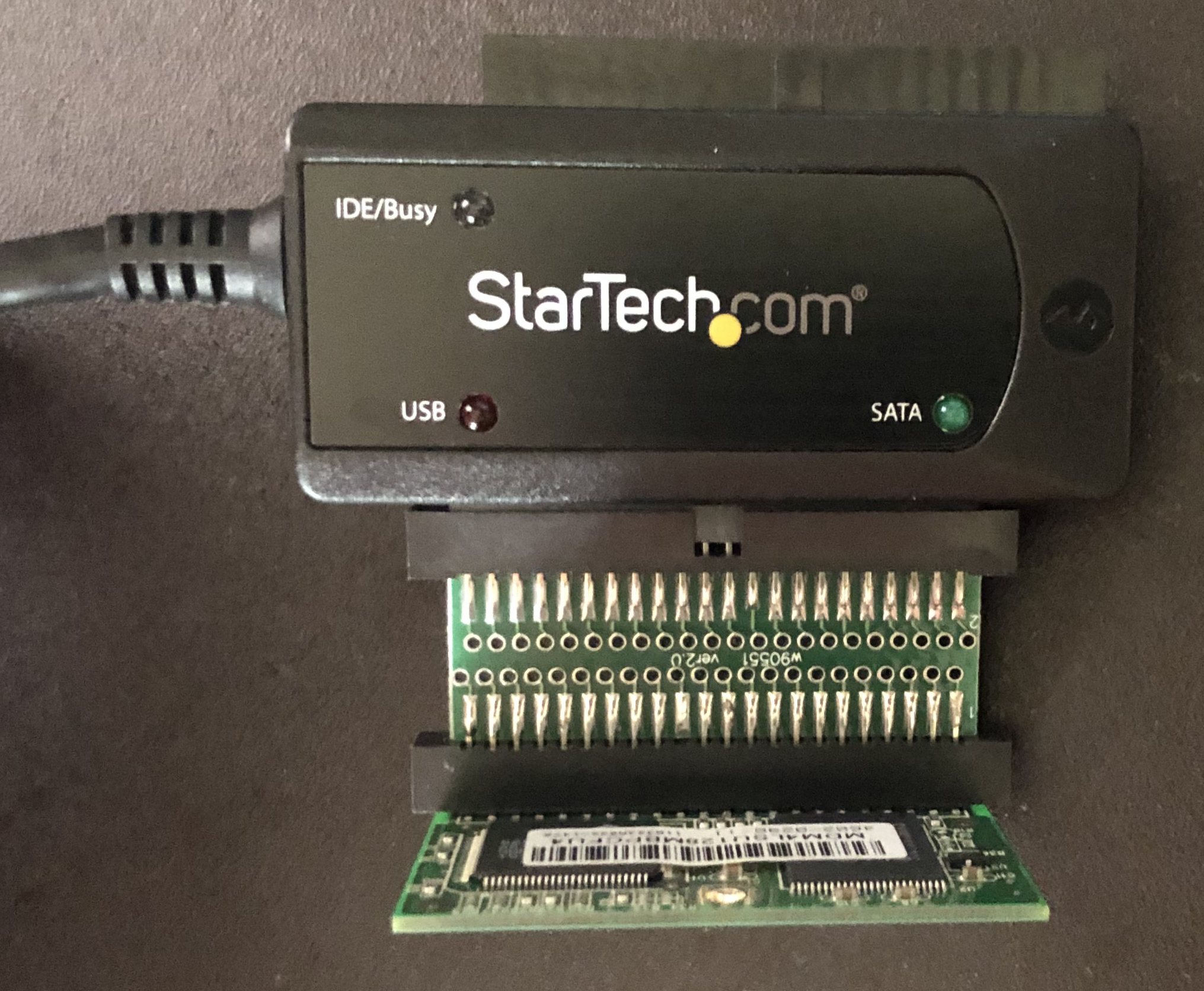 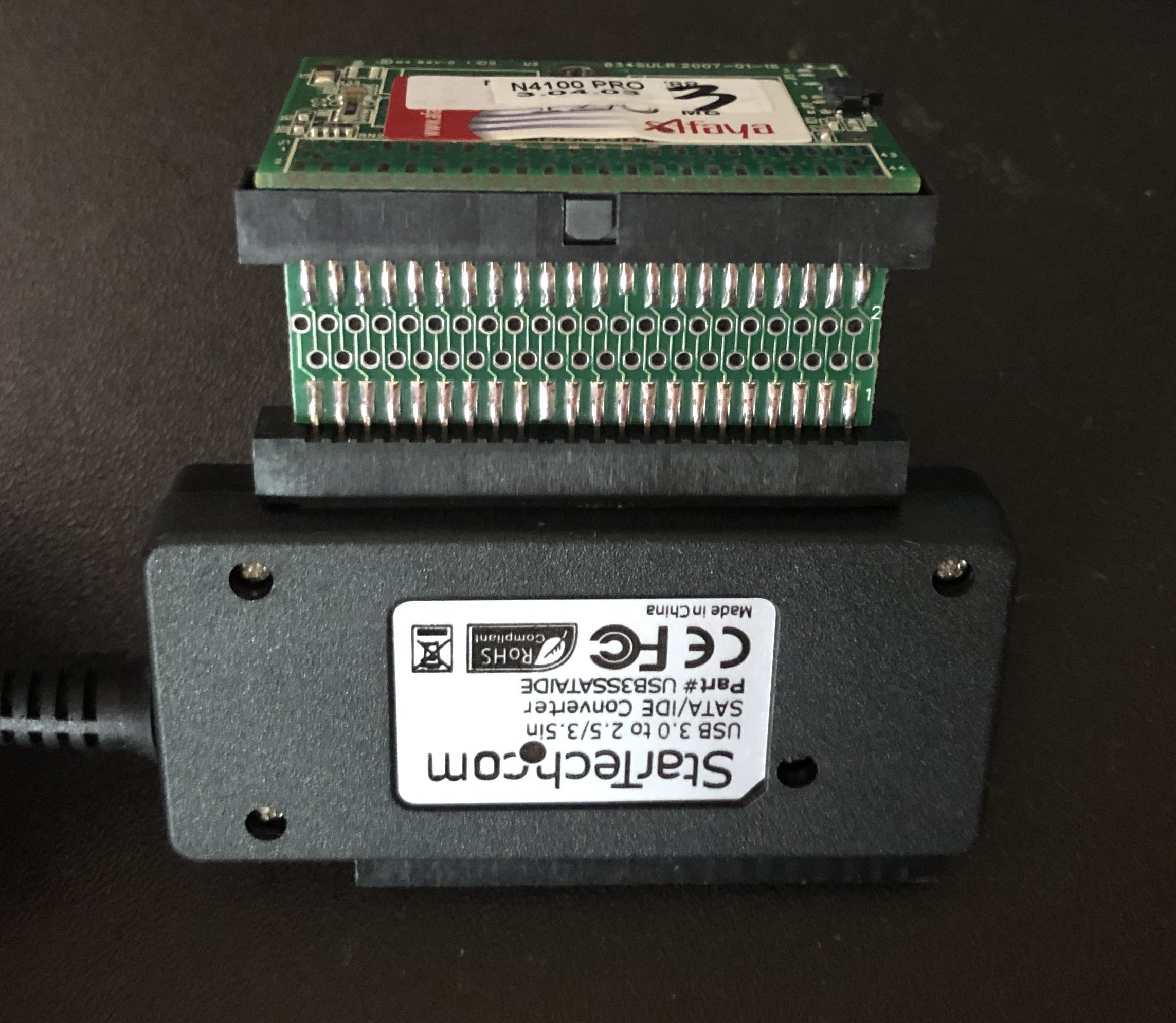 
That JXSZ W90551 adapter flips the rows of the header as it changes the gender. Try to find that adapter anywhere in a hurry . . . at this time, it's almost unobtainium if you are in a hurry. I waited three weeks to get one via Amazon, and it is the perfect tool for this job.
After getting the physical connector to read/write to the DOM sorted out, and obtaining a spare DOM, then I had to read from the DOM with the newer firmware, write to a file, then swap DOMs in the StarTech converter and write the file to the DOM.

To read from the source DOM, I first used the Ubuntu GUI utility Disks to find which disk name Ubuntu gave it when I plugged the converter into a USB port. These days, Linux enumerates disks sort of alphabetically, eg /dev/sda, /dev/sdb, etc. There are many, many ways of determining what identifier Linux assigns to storage media, with the lsblk command being one of the easier ones. However, with Ubuntu's adoption of snap packaging and runtime environment the system now adds "loops" to /dev ; my system has around 29 of them, this makes reading lsblk output difficult and error-prone. Give me a GUI and a nice picture instead. This screenshot shows the Afaya/Thecus DOM selected in Disks, with the "/dev/sda" highlighted: 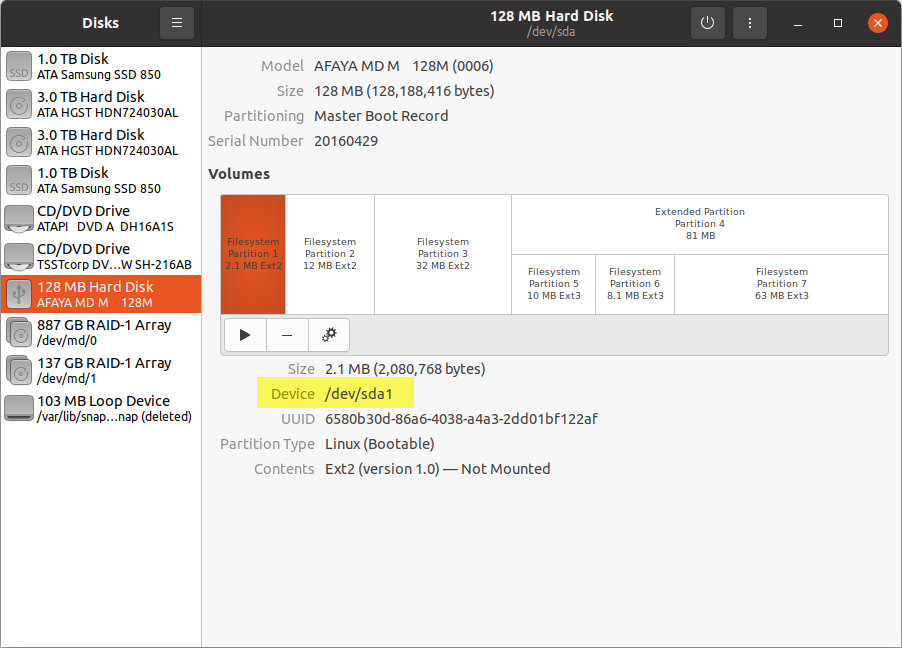 
Using that, I know how Linux labelled the Avaya/Thecus N4100Pro DOM in the StarTech converter that's feeding the PC via USB. Below is how I read the contents of the DOM and write it to a file:

I then swapped out the Thecus DOM from the StarTech converter, for a spare DOM I'd picked up from eBay for $6 for this purpose. Then reverse the if and of of the dd command, and it writes from the file to the new DOM:

Steps to reset web GUI & SSH password on Thecus N4100Pro, which does not have a hardware reset button.

Copy the first four files to the USB drive's root folder (the readme.txt is not needed, but it won't hurt).

Optional (since we're not upgrading the firmware): Download the last firmware available for the N4100Pro to the USB root folder:http://www.thecus.com/Downloads/FW/N410 ... .03.02.zip (alternate: ftp://asavage.dyndns.org/Drivers/Thecus ... .03.02.zip). Note: I was unable to successfully get this version of firmware to be pushed to the device via this USB stick method.
Unzip it to extract N4100PRO_FW_5.03.02.rom

The way the factory_test.sh script works is by looking at the filenames above, for the first one that begins with "usb", so:

If you want to update FW, rename from "xusb_upgrade" to "usb_upgrade" (and copy firmware upgrade file to USB root folder as above).

The above 3 functions CANNOT be executed together at the same time!

Plug USB into NAS and power up.

It will take a few minutes to go through "Configuring Network" etc., then it will read from the USB drive, reset the password, and power off automatically.

Power up NAS. When it finishes booting, root (GUI, SSH) password will be "admin".