Found the air conditioner sheave walking off the harmonic balancer yesterday while changing the oil. Loose enough that I can move the sheave fore and aft easily with my fingers.

I have found two rebuild shops:

Damper Doctor, who have already quoted me $111.95 to rebuild, couple days, and;

Dale Mfg., still waiting for their quote. (Yes I saw the $98 price on their page but asked for a quote anyway to make sure they are not on vacation.) I have used their products in the past and was impressed w/ their quality.

Not that great a difference in price, but if the rebuilders use newer, superior (urethane? silicone? synthetic rubber?) than a possible NOS item that has been sitting around aging (dried-out neoprene?), it might be worth the extra turnaround time. I am learning to be patient w/ this car.

I have yet to remove the damper, just bought a 6mm hex socket on the way home from work today. FSM says to use plastic mallet to help remove the damper. Do I need to matchmark its position first?
Top

No need to matchmark the damper to hub.
Matt B.

1. Drained radiator.
2. Removed air intake snorkel and coolant overflow bottle.
3. Removed upper radiator hose from radiator.
4. Removed upper fan shroud.
5. Loosened belts.
6. Removed fan/clutch from waterpump.
This gave plenty of access to crankshaft damper hex sockethead bolts, didn't need to remove radiator as previously planned.
7. Removed crankshaft damper hexhead bolts using a good sharp 6mm allen 3/8 socket. Was prepared to clean the crud out of the allen bolts but they were clean clean. Kept engine from turning by reattaching the alternator belt and locking the alternator fan. Each bolt loosened w/ a satisfying crack-- so glad I didn't run into Atalmark's problem.
8. Worked the crankshaft damper off the hub, a little bit each side at a time.

The air conditioner sheave came right off the damper rubber! Looks like the only thing holding it in place was the alignment/tension of the air conditioner compressor belt. Last month we noticed some bad "bearing noise" that appeared to be coming from the compressor (this during the R/R rear main seal session at Al's) but now looking back I bet it was this loose sheave.

The rubber is mostly intact on the damper w/ glazing on the main surface, minor chunking on the edges.

I decided to have Dale Mfg. rebuild it.

My question: The air cond. sheave has balance holes drilled in the face; do the halves need to be positioned in a specific orientation? There are no obvious matchmarks or other alignment marks.

Slightly off topic yet related: I also removed the air cond. belt idler pulley because there seemed to be some odd marking on the inner surface I wanted to inspect closer:

(Rear surface) It has been brazed in the past

Evidently broke off part of the rear face in the past.
Top

I think that the balance holes are not in any specific orientation, but that is only a guess.

I have a unit like yours, from a JY engine: 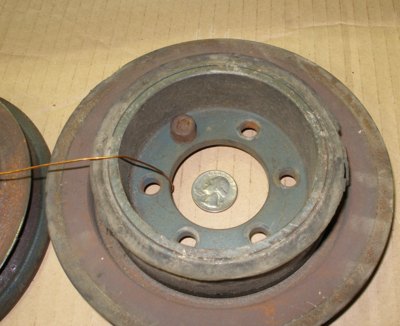 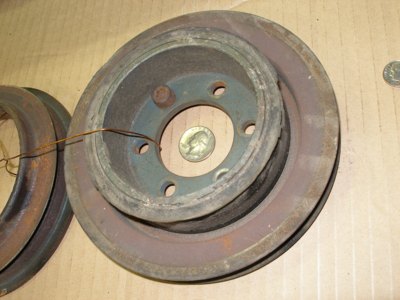 I will send you another idler (you will want to put a new brg in it, or I can install one before I ship it). I have a spare from a JY find. I think I have a pic of it somewhere . . . oh, yeah, I posted about it in this post 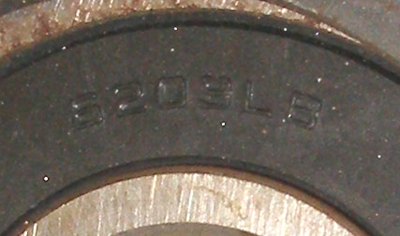 Let me know if you want it as-is or with a new brg installed. With the press, it's very easy for me to do.
Top

Thanks Al, I think I have one from a previous JY safari also, but IIRC it is the PS idler. Are they interchangeable? Will have to check when the light is better.

BTW, the cracked one had a copper washer sandwiched between the front of the idler itself and the rear of the front dished blue cover. Normal?
Top

I think the idlers are interchangeable. No, I don't think your extra washer is OEM.
Top

Would you be interested in sharing the shipping cost with me and maybe save a few bucks if we sent two dampers together? I have a spare damper what is also separated. Let me know, thanks.

If you can manage a "volume discount", I'd have my spare rebuilt too.
Top

So qty discount is small, but maybe having several to rebuild can lead him to a better result (thinking maybe making a better jig)?

Midnightz, were you wanting to bring me yours to put in the same box? I think the USPS 2-day air service allows up to 70 lb, so should be fine there.
I want to get mine done ASAP, get the car running again, will be in Olympia today and Rainier Valley this evening, want to ship today, where are you?

Al what is your itinerary?
Top

I can't get mine to you today; perhaps tomorrow (ie I can ship it to you today). Probably a better idea to have me ship it direct to Dale, and you let them know that it's part of the same "order".
Top

Midnightz, if you can bring yours by the Rainier Valley Cultural Center tonight that would be great, then I could send them out tomorrow. I will be there between 7-10pm, go down the ramp to the basement.

I won't be able to meet you tonight. I work very close to the cultural center (on the other side of the Boeing Field), though. Can I meet you tomorrow during the day, like at the UPS store?

OK, Al that leaves yours and mine, that's two, for a 5% discount, we'll just send ours separately to:

I'll tell him to apply the qty discount to our two (arriving separately) orders.

Planning to send mine out tomorrow (Thurs).
Top

Sent mine this afternoon, they said Sat. or Mon. ETA.

I will advise Dale (David?) that ours are a qty. 2 discount. Anything else he needs to know? Spacing between sheaves? (Not that I have any way of knowing that. Measure a known good one?)
Top
Post Reply
25 posts