So I today turned up the fuel to full 1/2 turn of the fuel screw and went for a test drive. I noticed more power again, slightly better turbo response time. However my peak temps seem to climb to the 1400F mark pretty fast and fighting bad head wind 40-50kmh at 110kmh(70mph) my egt was sitting at 1200F so I let off and went home. Now I adjusted boost to 8psi on the 1/2 turn. and saw my peak temp drop to 1300f which is my safe limit imo. But now it holds the same head winds 40-50kmh and drops my temp back to 1000F. where only 30 min earlier on 5psi I was holding 1200f and easily climbing to 1400f with any throttle.

I also notice now I can blow a little black smoke

as a heads up to anyone running NA and adjusting fuel. seeing multiple 100's of degrees F adding in for slight fuel adjustment you could likely get into a wicked high EGT range with loads. Thus resulting in engine life reduction most likely. Only proving an EGT gauge is an absolute must for anyone fiddling or hauling heavy loads. Even an engine is poor working order could result in some kind of EGT change.

the question I am asking myself now. If i say jump to 10psi boost and add more fuel am I better off allowing my temps spiking to 1400f area for short periods? or do I dial fuel back and take the safe way always knowing I'll never get to hot and not need to watch the gauge.

and where did I read that you could crank the fuel screw 2 turns? thats a load of S&^% atleast for this VE IP. 2 turns of the screw and you would be WAY into meltdown temps. I'm not saying you can't do it. I'm just guessing it would take like 18-20psi to keep the temps in check for more then a 20 second uphill pull. maybe elboss has more info on the metal headgasket? I know he was at like 2 bar boost which is about 28psi before he went to that custom lower compression gasket to get up to 3bar which is 42psi ish.
Top

hey,guys will you want to know more about the dmv vehicle inspection?
Top

In my opinion this is spam.

florinda.hickton wrote:hey,guys will you want to know more about the dmv vehicle inspection?

I believe your "voices" are correct Wayne.
Retired Pauly
Problem with being retired is that you never get a day off.
1987 D21-J SD25 KC
KJLGD21FN
Top

Just a quick update since its been awhile. I update my turbo drain line to a 5/8id hose and the brass fitting is straight through with no bottle neck. This seems to have have helped turbo compressor leak as it is now the least it has ever been. So I stress again the importance of good turbo drainage.

Also after having my fuel screw a half turn. My temps were under control and smoke wasn't to bad but seemed like it was hard on fuel compared to before. Now I'm at 1/3 turn and smoke is good, power is still pretty much the same as half turn according to my butt dyno and my fuel mpg seems to have improved again.

Also water in fuel seems to be an on going issue. Pulled injectors for what seemed liked miss on start up ... Again. Found part of the injector seat blown off... Great....lol

Just watched your you tube postings.
Looks like the boys having fun.
Qu'Appelle Valley ?
Retired Pauly
Problem with being retired is that you never get a day off.
1987 D21-J SD25 KC
KJLGD21FN
Top

ya that would lead to quappelle valley i guess lol. I have many updates since then! doing that river crossing looks like spelled the end of the rusty frame rails haha 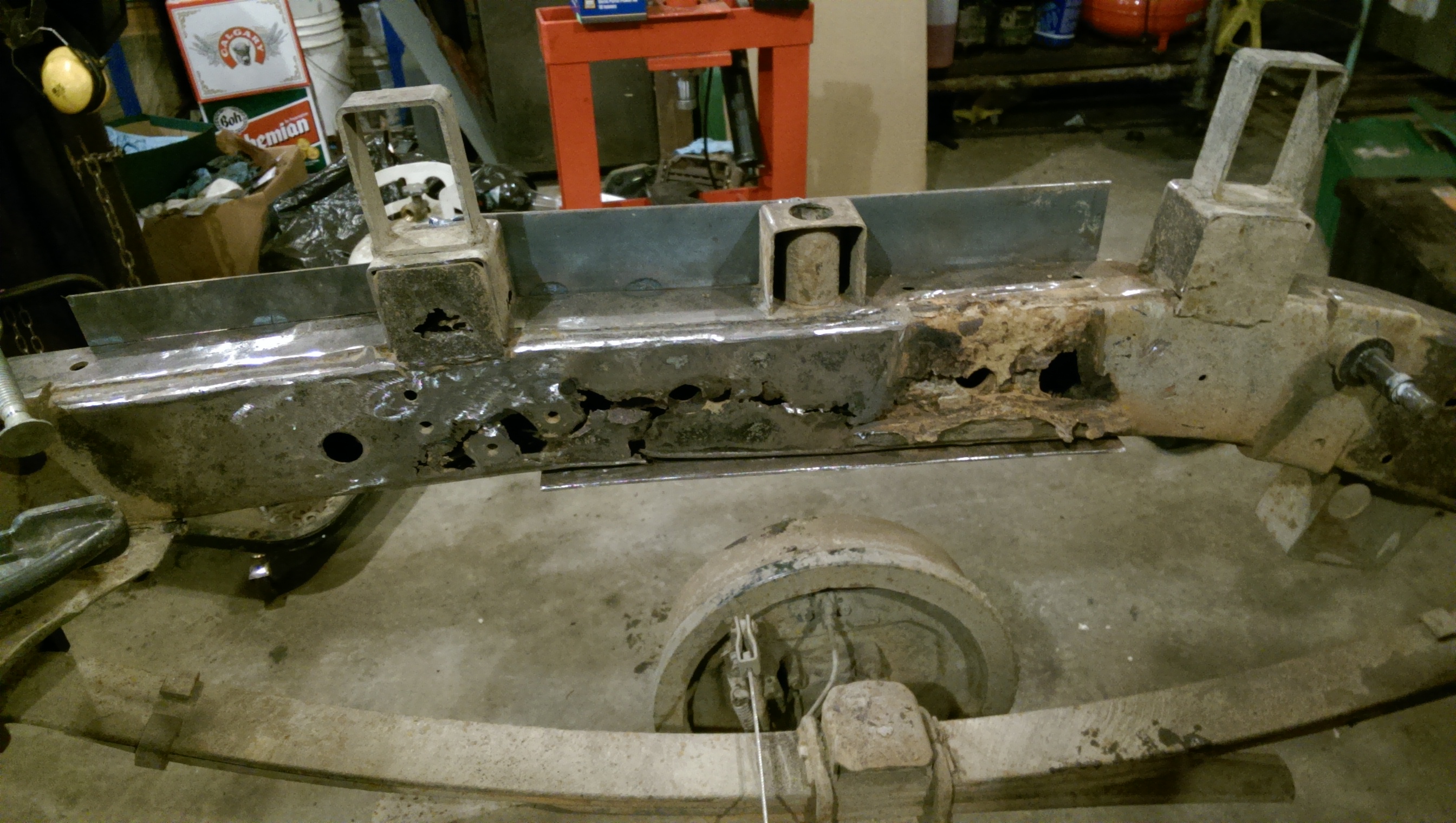 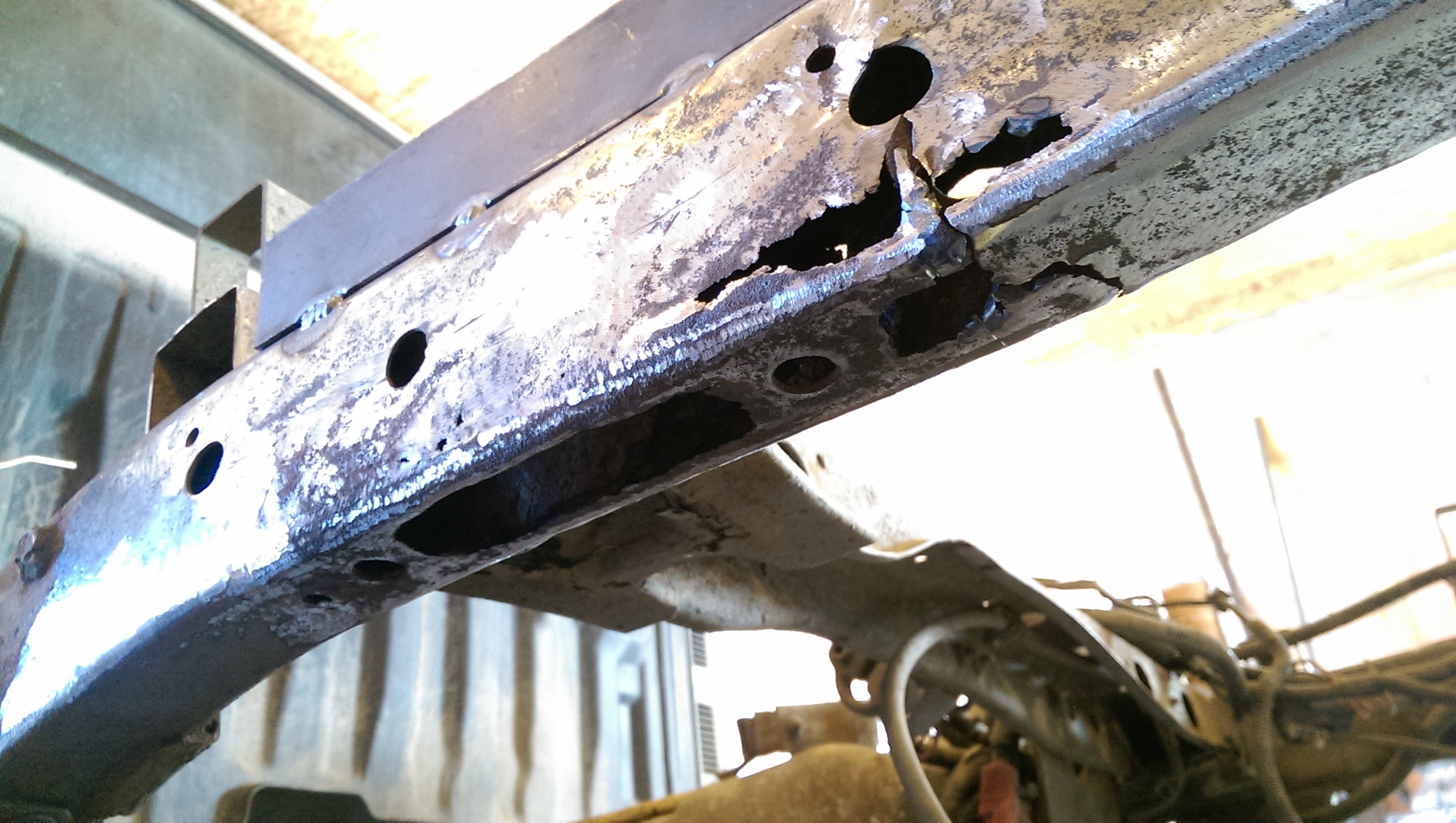 used some 3x4 rectangle tube and cut the seem out 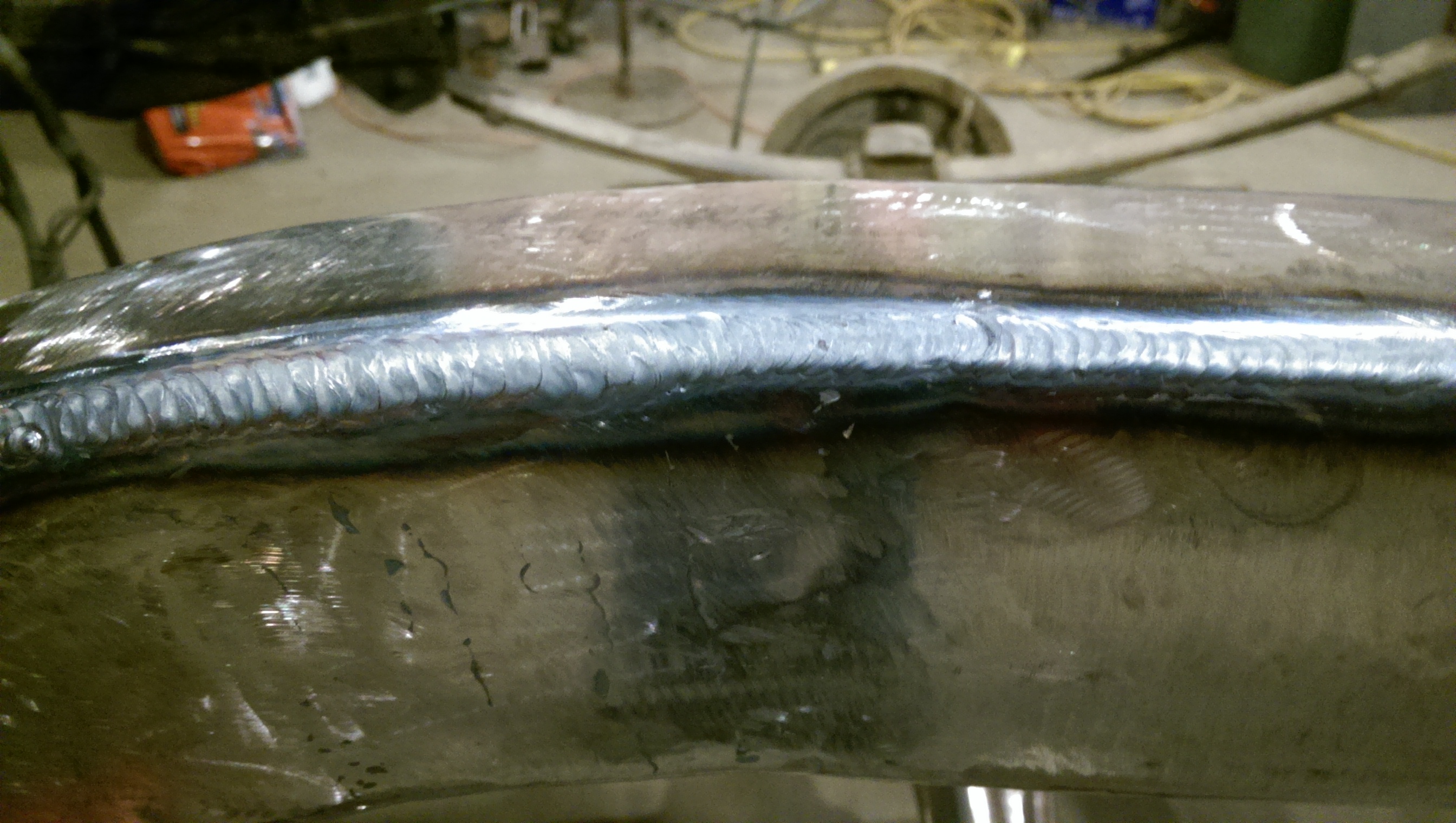 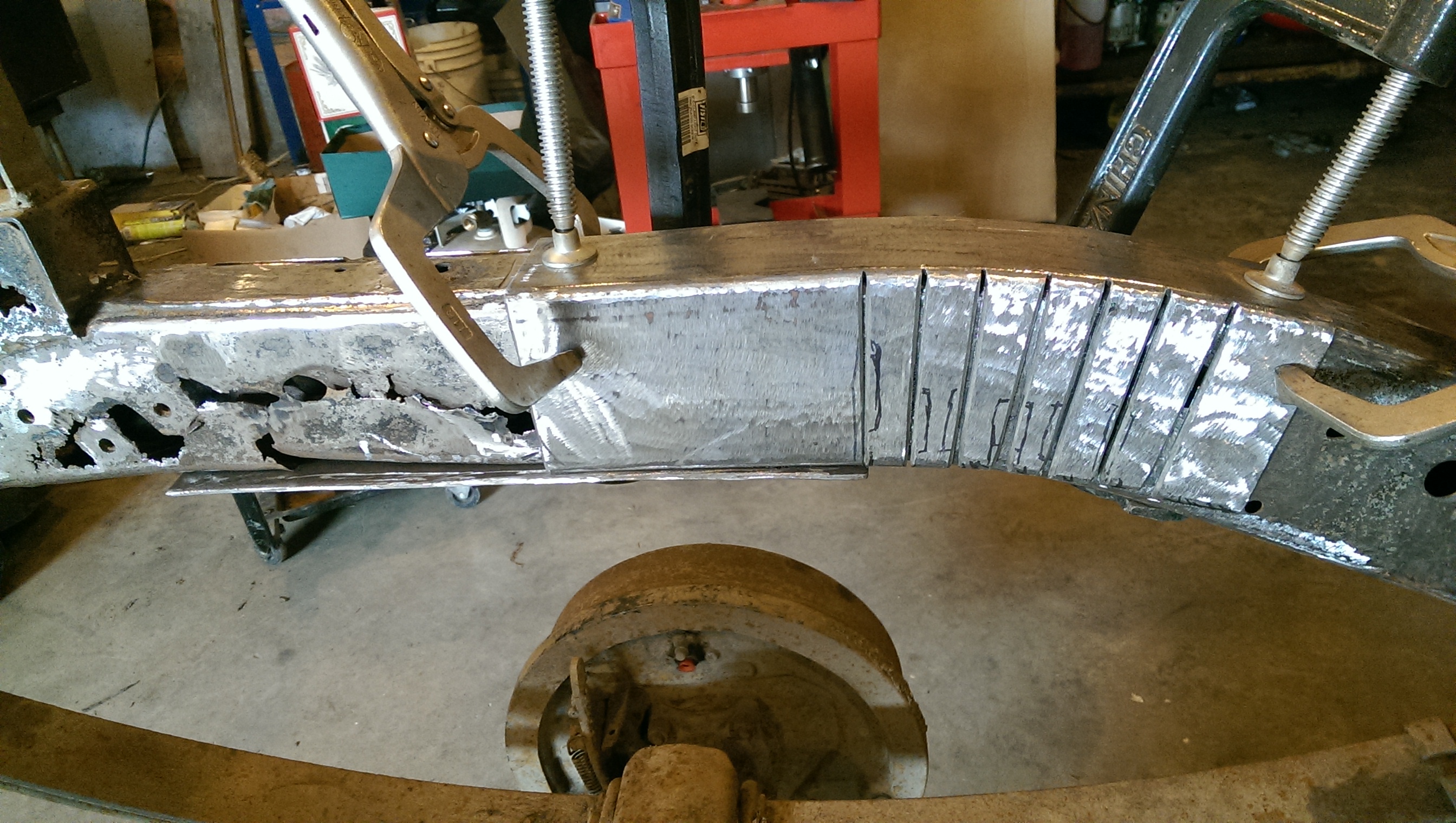 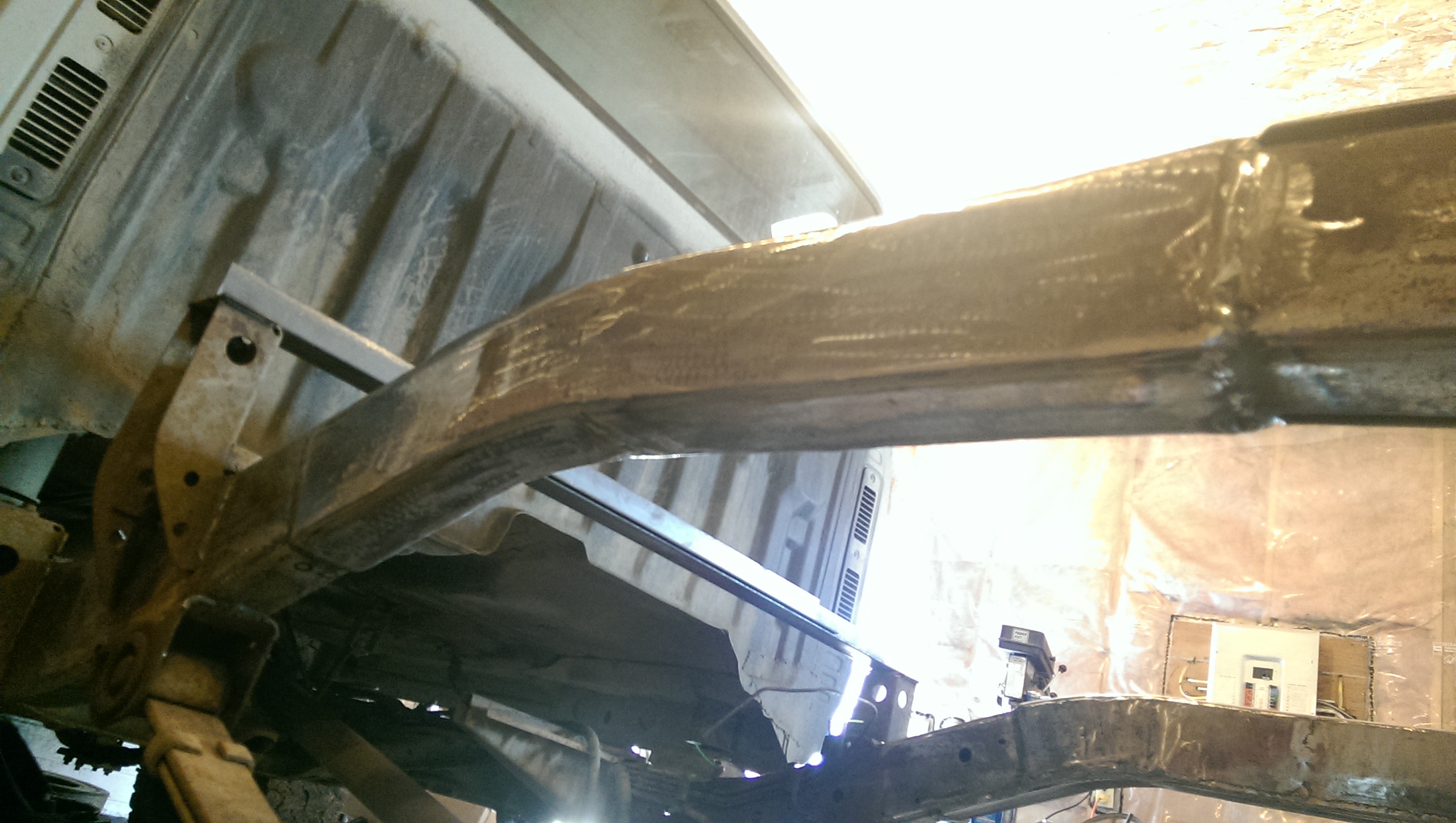 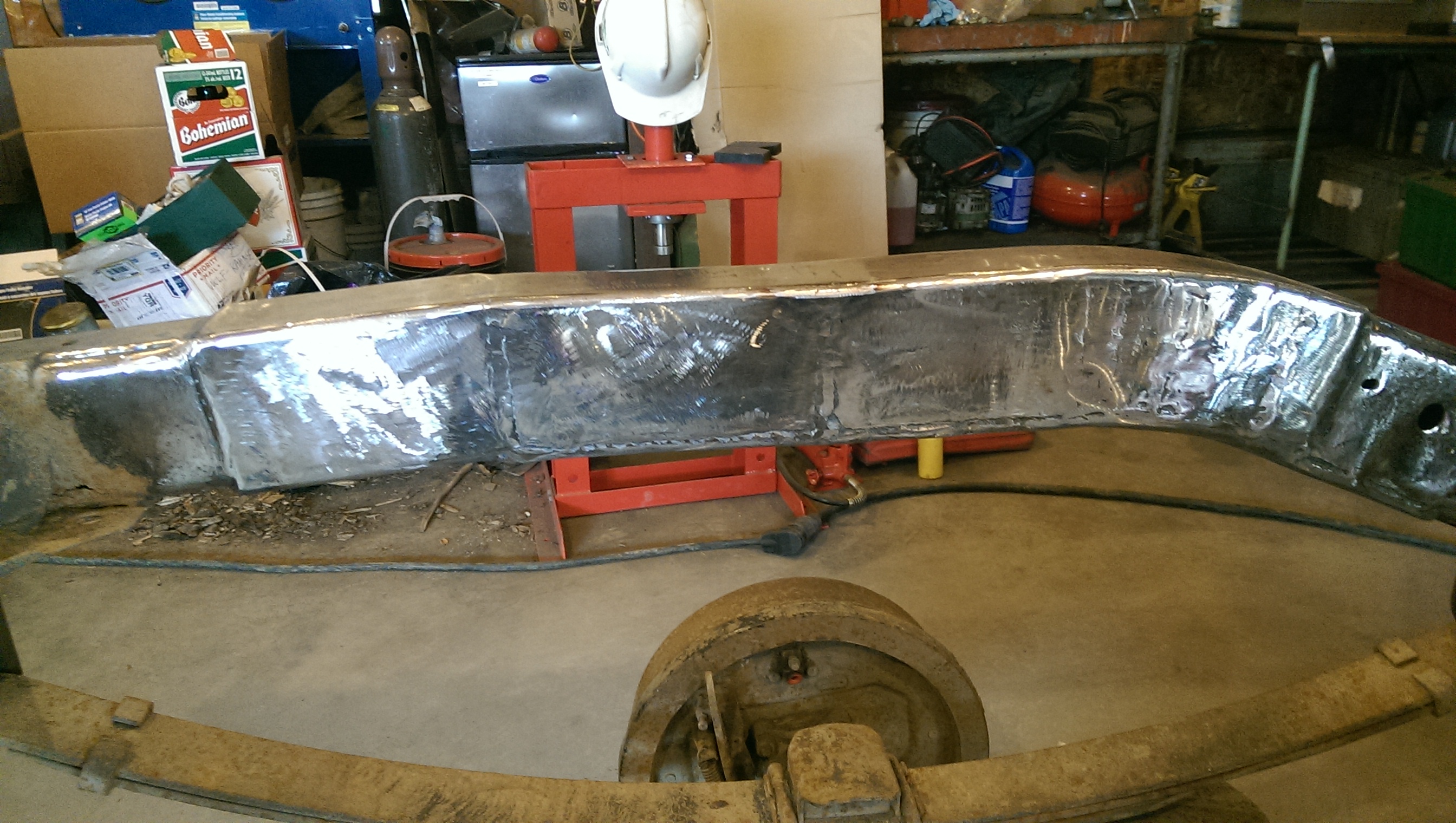 Nice Work
Appears you have a "project" to say the least
Retired Pauly
Problem with being retired is that you never get a day off.
1987 D21-J SD25 KC
KJLGD21FN
Top

so I decided since I was doing major frame surgery now. That I should probably ditch the rear spring over axle leaf springs which are just punished from those 35s and diesel torque. I was going to install a ladder bar system that I was designing. but after seeing how extensive the rusty frame is. I decided to ditch them all together in an effort to gain more flex and better ride. The 2 leaf stock spring pack isnt really up to any serious job but light loads and pavement driving.

so I have started to design a 3 link suspension system for the rear. I'm doing my best to design this around "self-JIG" design. so people with a welder and little experience with suspension can install this kit. 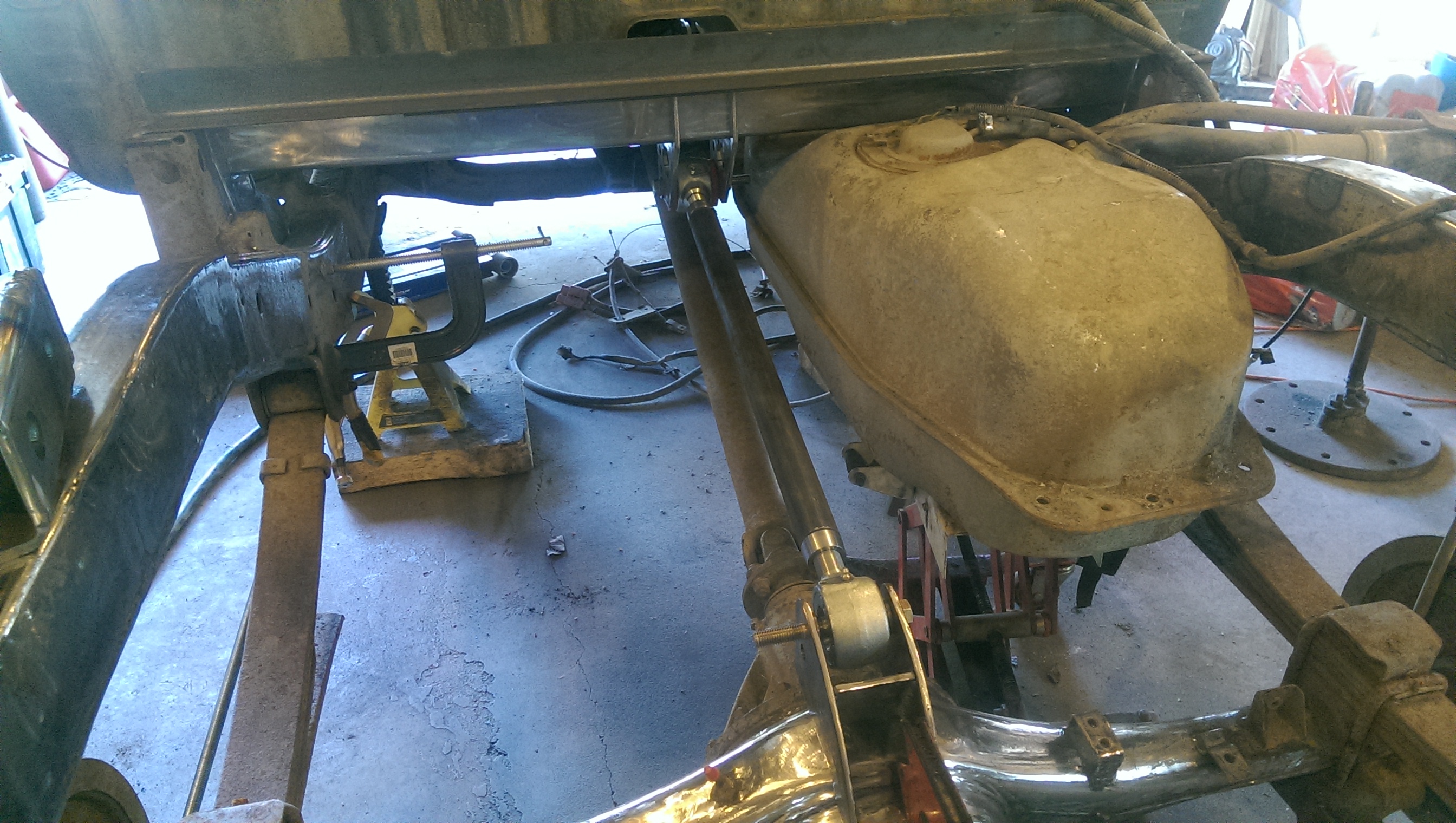 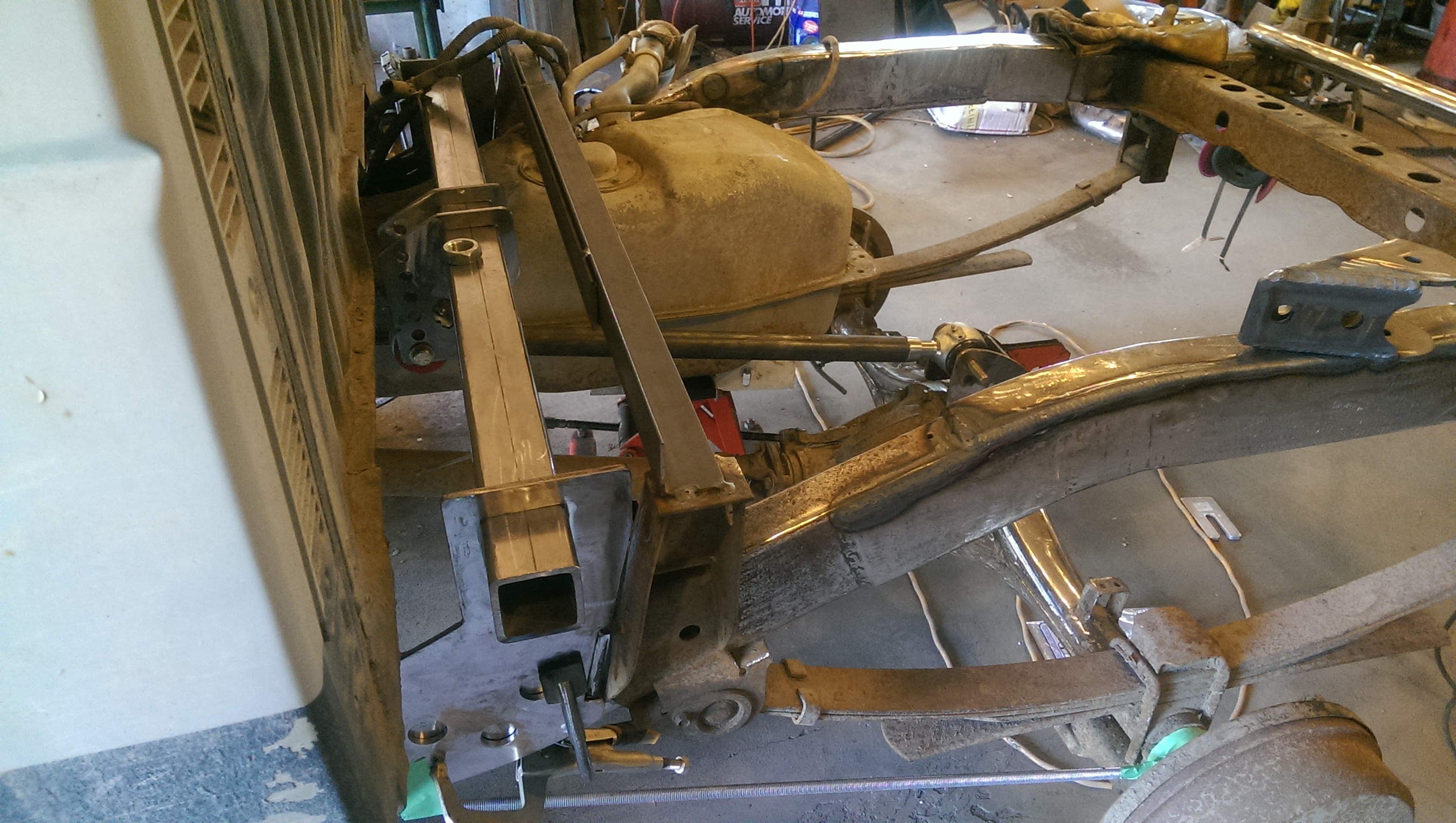 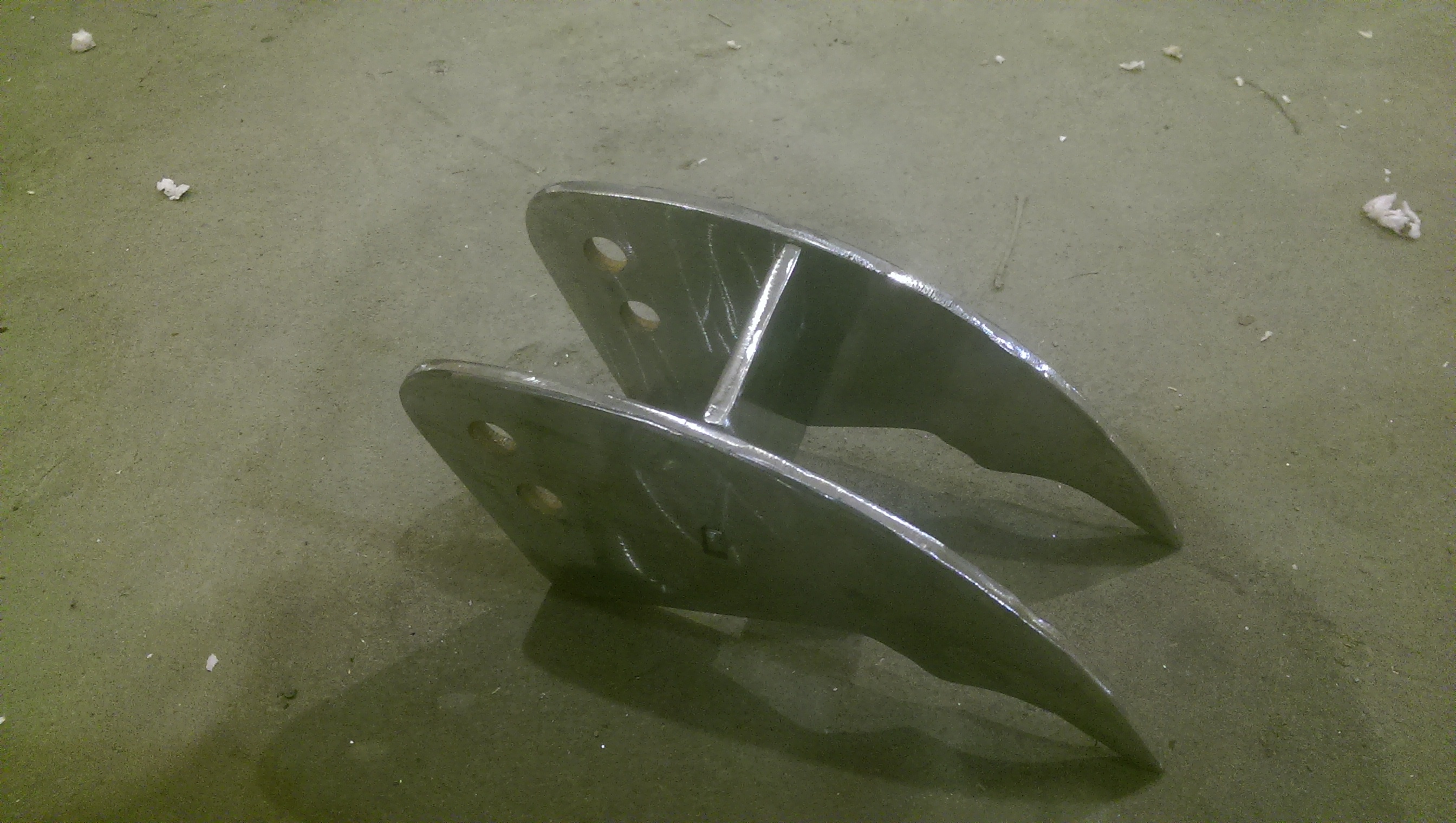 also decide to make some new turbo brackets as my motor mounts seem to be going bad already. the tempo motor mounts cant hanlde the torque loads. when I dropped into the river i think my exhaust touched my brake booster and I broke some manifold studs and turbo brackets.

So while I was in there making heavier brackets I decide to ditch my throttle body blade and all its crap, I machined the throttle body out to a full 2". I then used the old throttle shaft for my boost sensor line and possibility of LPG (propane) fogger can be added.

My biggest reason for machining the throttle out and relocating my wastegate line is a couple reasons.

2. in effort to move that "volume" of pressure drop closer to the motor enlarging the throttle body has now given me largest surface area inside the intake manifold. So as each valve opens the "average" pressure drop should be lower in this area due to insreased surface area and volume. so back at the wastegate this should compensate for intake restrictions while also giving me a larger area to sense my boost pressure.

I'm hoping with the throttle body modified this will again improve my boost performance in lower rpm. if anyone is still reading this thread. the suspension works great. very stable and far exceeded my expectations for handling for no sway bars on a tall truck on highway and hard corners. suspension seems to flex and take everything in stride very nicely.

on 2.5in lift rancho leaf springs up front

I'm still following and looks like some nice work.
Have you kept track of your hours ??
Looks like more than just a weekend or two.
Retired Pauly
Problem with being retired is that you never get a day off.
1987 D21-J SD25 KC
KJLGD21FN
Top

the frame repairs and design time total would be a couple weeks prolly at full time job? lol. I quit counting hours long time ago when the motor decided it hated life lol

If ya aint wreckin shit and gettin dirty ya aint having fun.
Just sayin.
Retired Pauly
Problem with being retired is that you never get a day off.
1987 D21-J SD25 KC
KJLGD21FN
Top
Post Reply
95 posts