I did a frame notch to this truck last week, if I put even a little weight the axle would hit the frame(no bump stops).
First I put Datsun 720 4wd leafs in the rear, I kept the 2.5" lowering blocks that were already in it, then I did the notch.
First I made a frame brace/stiffener for both sides that would not hit the box above it as I didn't want to cut holes in the box bed. 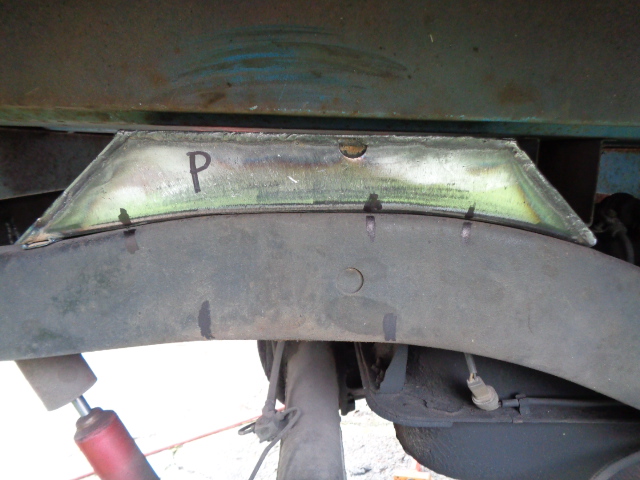 Then I removed the box. 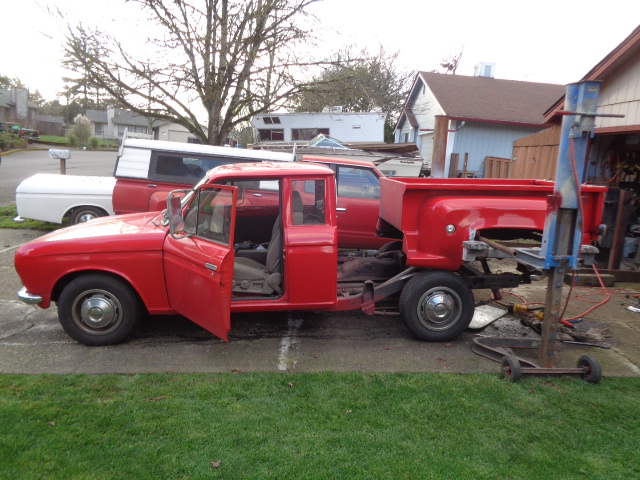 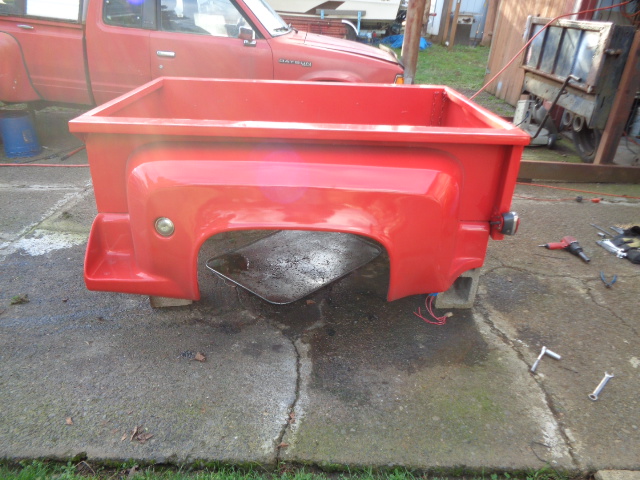 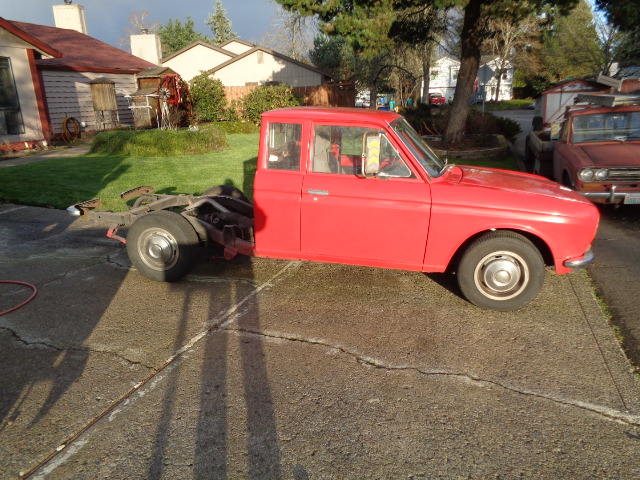 Then I did the notch Then I made plates for the sides with holes in them so I could kinda spot weld the whole thing together, then I welded the plates all the way around outside and inside. Then I painted and undercoated the notches. 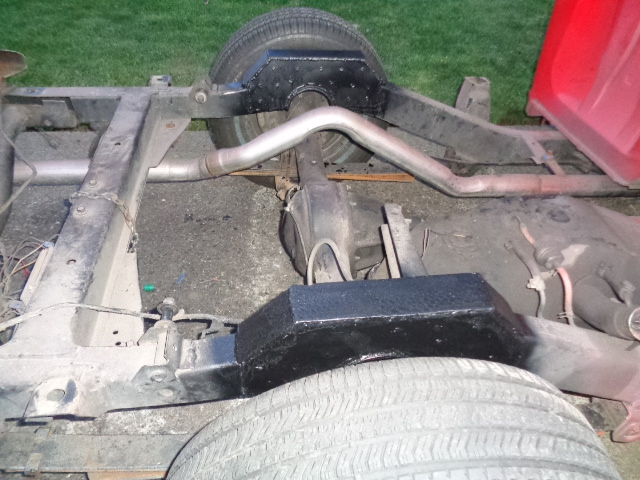 I then undercoated everything that could be seen from the outside. 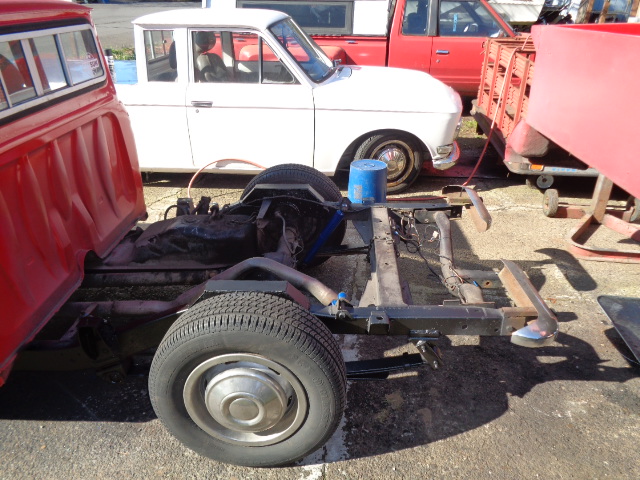 And it is all back together. 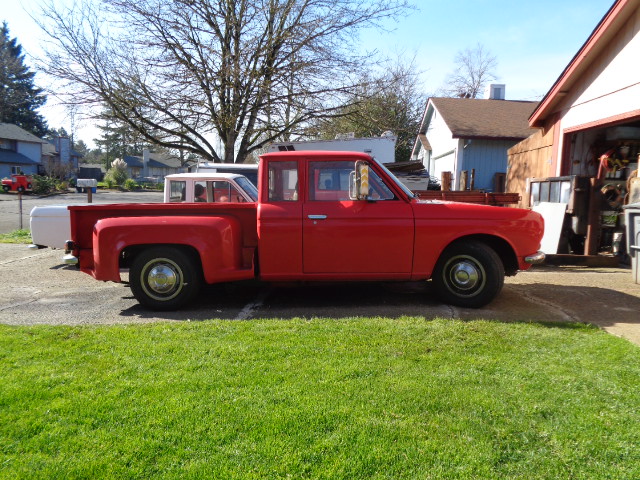 I tore out the complete dash today to upgrade my dash lights so they are adjustable like they were in the 720, I didn't figure out how to do that back in 2010 when I first built this truck, I tested the wiring and all appears good, so now I will apply sound deadening material to the interior firewall and fill/block all holes, I did the windshield the week before and it appears I fixed all the leaks caused by the windshield gasket, I also installed my brand new windshield I had made 7+ years ago.
When I put the dash back in I will be using a freshly powder coated dash face and metal top that has been in storage for as long as the windshield.
I know the voices are not real,
but they have some really good ideas.
Top

I fixed the starter bolt today, I took everything apart on the driver side of the engine, drilled the starter mount hole all the way thru the back of the case and I installed a long bolt and put the starter back onto position, it didn't really go all that smoothly as the starter didn't want to go back in, but I finally got it mounted without breaking it.
I also mounted the EGT probe before the turbocharger, I didn't take photos because I just wanted to get it done, the probe is dead center in the hole, and it goes almost the whole way across the exhaust tube, I think it is perfectly mounted.
I also put the air heater element under the throttle body and wired it up, but I didn't use it to start the engine, I just started the engine to see if I had any oil leaks and there are no leaks, but it was dark out so I will check everything again tomorrow, it appears that the blue 90 degree elbow is now rubbing the under side of the hood, I might trim the elbow, but the engine started right up and the starter appears to be working properly with just the 2 bolts holding it in position

I worked on this all day and talked to myself several times when things were not going right, but hopefully it is done.
I know the voices are not real,
but they have some really good ideas.
Top

Here is the Air Heater Element installed, it's kinda funny, red is ground and black is 12V, it just turned out that way length wise. 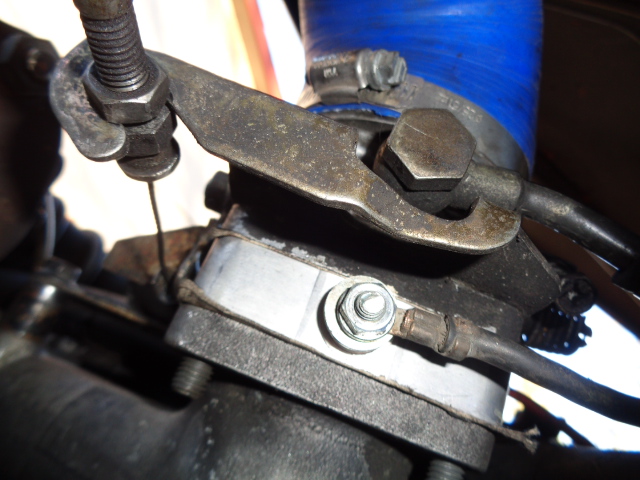 I shaved the blue elbow on one side and twisted the elbow connected to the turbo down which forced the whole assembly lower, I don't think it rubs on the hood anymore, I will know when I drive it again as I cleaned off the elbow where it was black from rubbing on the hood. I hope everyone is all right.

It never got cold/below freezing for me to truly test this Air Heater Element, but I can say without a doubt my engine starts easier when I use it, when in the 40s if I don't use it the engine misses a few/several times before running smooth(makes white cloud), if I use it it doesn't miss at all or sometimes just 1 or 2 misses(hiccups) and only a puff or two of white smoke.
I have not really done much to this truck lately except drive it, it appears to still have a water leak into the cab, I gutted the interior 2/3 weeks ago, fixed a hole on the driver side floor board and I changed out the dash, I had a fresh powder coated dash face and top, I also put a new windshield/gasket in the truck, it rained but stayed dry, it is wet again, at the time I also changed the wiring so the dash lights are adjustable now, it took me years to figure out how to do that as the 521 dash lights ground out in the dash to work, but the 720 wiring harness doesn't work that way, I used the side maker lights to power the dash lights. 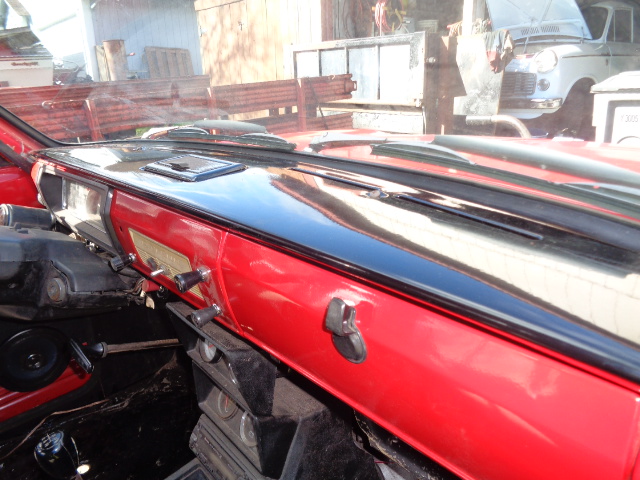 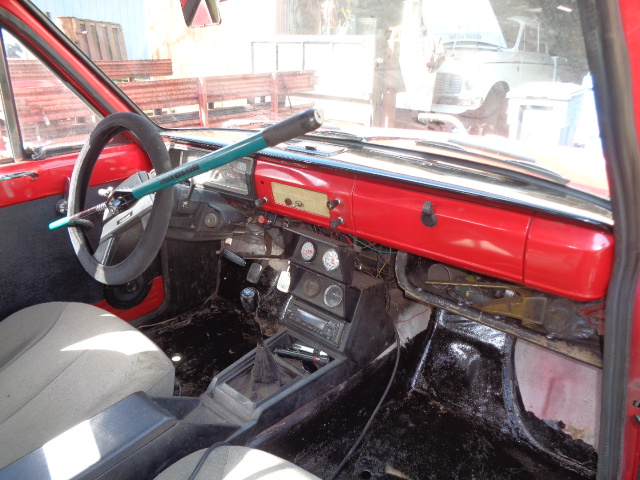 I have a 411 instrument cluster I wanted to use but I drilled the one in it now for the e-brake and glow plug lights, I have been trying to find little LED indicator lights that look like the ones in it now but have had no luck, they do not look like what I have or they are not as described after they arrived, I am looking for something that looks like the ign/oil indicator lights in the instrument cluster in the photo below. After years of looking I finally found another 1985/86 Subaru XT turbocharger(used), it sat on a shelf for a very long time, I had to pull it apart and clean everything before it would spin up on my work truck exhaust, the shaft is tight, tighter than the one on my truck now and it works great, I was thinking about putting it on my 720 engine and see if I got the same type result I did on the 521 kingcab.
There is one big difference between the 521 and 720, both are SD25 engines, both have inline injection pumps, but as far as I know the 521 engine injection pump is setup in the stock configuration, but the 720 injection pump has been turned up to run richer, that is what Larry told me when he sold me the SD25 turbodiesel powered Volvo wagon.
These two vehicles are very different driving vehicles, the 720 has a shitload of torque but doesn't really like the freeway, it will go a 100mph, but anything after 55/60mph I have to put my foot in it, while the 521 starts out like it doesn't have a turbocharger(1st/2nd gears) but after it is in 3rd gear it comes alive and it will do 75mph+ using about a 3rd of the pedal, hardly any pedal at all going 60mph, I would be interested in finding out what the 720 drives like with a turned up pump with the Subaru XT turbocharger, but right now I am busy doing other stuff, maybe later this summer as I will have to make stuff to mount it on the 720 engine.
I know the voices are not real,
but they have some really good ideas.
Top
Post Reply
261 posts