I am pretty sure that that trim code on the plate under the hood is the paint code. I used it to have some paint mixed when I touched up some areas. I just gave them that code and they looked it up in their book and forund "Platinum Grey Metallic" over "Fox Silver."
Ben Martin

The paint / trim code for my wagon is "015 P" which in my case is supposed to mean dark brown metalic.

Out of curiousity Al what does your 1983 wagon paint / trim combo say?

glenlloyd wrote:The paint / trim code for my wagon is "015 P" which in my case is supposed to mean dark brown metalic.

glenlloyd wrote:The paint / trim code for my wagon is "015 P" which in my case is supposed to mean dark brown metalic.

That's what I'm saying, the color of Al's car is not the same as mine. Check my rig post (steve addy's max wagon) to see the "brownie" color.

I don't have a color chart for 1982 but I would bet that it's a different color.

I was referring to the color of your car steve, it looks much more red that brown. :headscratch:
Ben Martin

83_maxima wrote:I was referring to the color of your car steve, it looks much more red that brown. :headscratch:

Really...in person it isn't red at all, at least not like Al's car looks. I don't think I did any color correction on the pictures either..hmmm.

Back in February, I'd said:

asavage wrote:I went in my '82 today to check something, and when I lifted the rear seatbacks, three mice scampered out! . . . Bought some sticky things that are supposed to trap mice like flypaper I guess. I'll put them on the floor tomorrow.

I had put two of the "traps" out. They are little plastic trays filled with some obscenely sticky gel. At first, I was looking through the window of the Wagon every couple of days, but I never saw another mouse inside, and the traps never had a mouse on them. Gradually, I checked less and less often.

I just went out to get the lawn chair out of the back seat (that's where I keep it), and both traps are FILLED with dead mice. Five in one, four or five in the other. Even the "spare" trap I'd left in the box on the rear seat had been opened and it had one dead mouse in it too!

Bottom line: they sticky traps work. But on the mouse's schedule.

Didnt know they work, how big do they come in- I might do another battle against the monsters in my garage
'83 maxima sedan, l24e, a/t, black

They're about 3" x 4" when out of the box. They don't smell, which I like. And, judging from this incident, they are good for at least six months. And they're pretty darned cheap, too, like two or three bux each.
Regards,
Al S.

I'm driving my old '82 Wagon daily again. I worked most of the day last Saturday, pulled the console and cleaned it of spilled drinks from PO and his kids, sprayed Simple Green into the heater fan to dampen the rodent smell from last winter when I had a family of them under the back seat.

Last week I pulled out the back seat bottom, found two nests in there, sprayed down all exposed metal with Lysol and wiped up every thing. Things were pretty damp, but it hadn't been driven in a long time and was parked on wet gravel, so I didn't think much of it.

Saturday, cleaning, the rear underseat area was still a bit damp, even though I'd run the heater on high the whole week (and we have heater ducts to the rear seats). Hmmm.

Sunday, I drove 200 miles to Olympia and back, and it rained most of the way. Picked up industrial shelving unit at Costco, their last one (I wanted two). Almost had to take it back: I just barely got the box to fit in the Wagon. The assembled shelf is 6.5' x 2', so the box was probably 6.5'. I tilted the pass seat forward, slid it forward, and pushed on the box, and it was right up against the tailgate glass, but it fit! Heavy, too.

Anyway, I dropped a Subway napkin on the rear floor that day.

Monday, I picked up that napkin, and it was wet and stained. Put my hand on the carpet: sopping! Passenger side only. Hmmm.

Got out the flashlight and went looking: 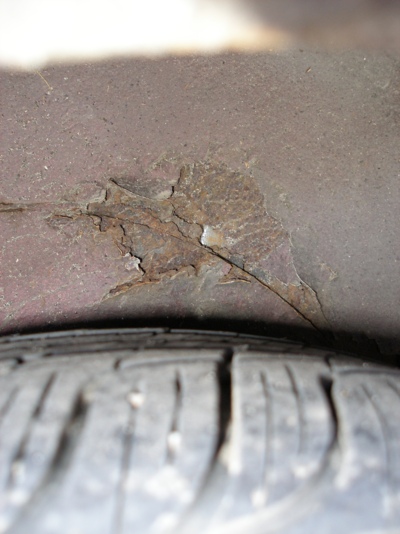 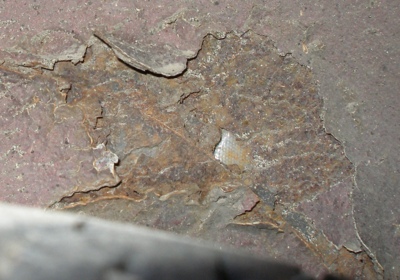 Doesn't look like much, but there is a 1/2"-sized portion of that rust in the RR wheelwell that is the carpet's backing.

While the rockers have been rusty on this Wagon for as long as I've owned it, this I think I'm going to have to try to patch. In the Great Pacific NorthWet, it's important to keep the water on the outside of the vehicle!
Regards,
Al S.

My current family of Nissan diesels. 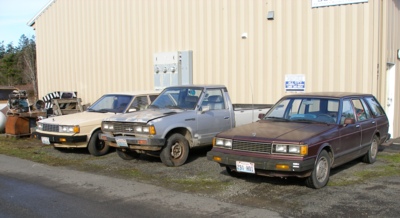 How much work would the 83 need to be ready for a drive to TN?
Matt B.

I may sell the '82 Wagon as well. I still have an LD28 in storage, and I've got the spare L4N71b trans, so that's really all I need for my future project. I've been keeping the '82 Wagon as a runner, licensed and maintained, because I've owned it for a decade and it does function as a vehicle when push comes to shove, but I don't really enjoy driving it, and I think I'd rather it find someone who would. It isn't as cosmetically pretty as the the '83 though, with numerous tears in the door panels (before I got it) and some stains, and some hideous white paint spilled in the cargo area, dripped onto the rear bumper.

But everything works on it (except, I've noticed the horns have died again, and the hazard lights don't). A/C was recently charged and works. Trans has been flushed, got extended-life coolant in it, 2k miles on IP belt & tensioner and new injectors. It seems to have stopped leaking fuel at the IP shaft, after sitting a year -- I would count on putting a new seal in.

Aligned two years ago. A stack of records from the OO and myself. Near-new Les Schwab Toyo tires on Sedan alloy rims that look pretty good. No vibration from the tires, all the way up to top speed (whatever that is: it'll bury the needle). Needs a driveshaft, from the '83 I suppose. It vibrates badly from 1-15 MPH, and tapers off to no vibration at all by 25. I've had the shaft out three times, and it all appears normal, even sent it to a sorta-local driveshaft "specialist" who couldn't figure it out either. I think I'll swap drivelines in the next couple of weeks.

Paint is bad, hood is dented from someone sitting on it. Got the "sticky high beam switch" that needs lubed. But door cracks have been reinforced. Battery one year old. Smokes like a demon when you pour the coal to it: all black, does not use oil.

It's a driver, doesn't need much at all. I haven't put 2k miles on it in three years. I did exercise the trailer hitch I had put on nine years ago, for the first time, and Lo! The wiring they put in actually works. Towed the little util trailer 200 miles (made the cargo area resonate, bad on the ears). Still am getting 25-27 MPG over the last three tankfulls.