King Cab not a Diesel but good shape


Response from owner: my brother just registered it last year for 2 years. like the add says its a running driving truck. if you send me your email ill send you a video of me driving it around.please feel free to call. thanks, Denny 520-991-6659

Wonder what engine it has? Not a SD-22 or the air intake would be on the drivers side. Looks like a gasser.

This is the best looking Datsun PU I have posted so far, this is a beauty.
Looks like my 82, too bad I can`t copy and paste the pictures.


Here you go, it looks to have a later hood.

She is a beauty isn`t she? I changed out my front end when I painted mine back in the 90`s. a Body shop had the hood, front fenders, grill, bumper and corner fender lights for a 85 in the Nissan boxes. got it all for $150. getting rid of those plastic grills looks much better.

I use a 92 Mitsubishi paint code, Passion red. much better than the tomato red orig color Datsun used. I need to take her apart again to repaint and spiffy her up.

Just saw this one on my local Craigslist...

When you are posting a photo here, you right click on the image, and click on "copy image URL", then come back here to your post, at the top are a bunch of boxes, the second from the end on the right says "IMG", click on that box, it will put "", now the photo will be in your reply.
This is how I copy photos I see, I also use the "URL" in my Picasa account. 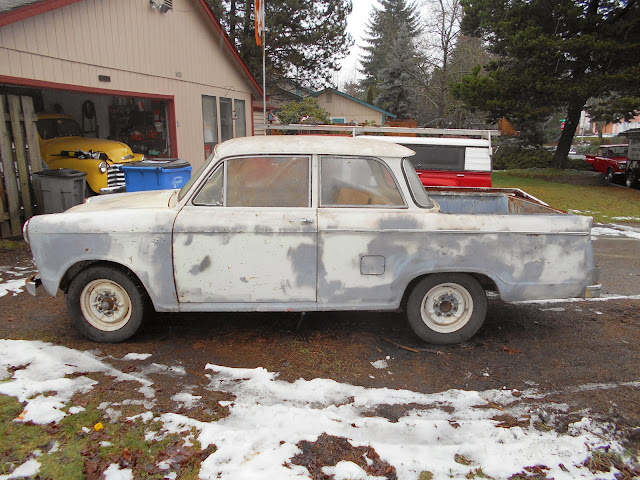 FWIW, I am making reasonable progress on updating the site to a newer version of the board software, and I expect that when that occurs I'll be able to offer native hosting of images & attachments.

I know I've been saying that for something like five years, but it does seem more possible now.
Regards,
Al S.


I have a very rare one indeed. Turbo Diesel LD28 2.8L This is a factory 5spd which is very rare as well for a diesel.
Sedan with approx 380K and running strong. I just serviced all the basics. New belts, glow plugs, battery, fluids, and filters. I also completely went through the fuel system and replaced nearly everything including boiling the tank out and sealing it. The shocks were also just replaced.

The car runs very well. It has some flaws as it is a near 400K mile vehicle. The talking lady doesnt work. There is no center console. The windshield has 2 chips, but no cracks. The cruise control doesnt work. It also has an oil leak, that I may or may not address before selling it.

The AC is a charged and working great.
The car comes with the original rims (not the ones pictured) with good tires
The car has a clean title and is registered through Jan 2015.
It gets an average fuel consumption of 30mpg. It does get upward of 40mpg if driven the speed limit on the hwy and worst case it gets 28mpg in the city or if your a speed demon. The car has very good get up and go.

I also have :
-a good running LD28 engine complete with 180K miles as a spare engine for sale $1200
-LD alternator with pump $100
-extra glow plugs $40
-set of 15" aluminum turbo zx swastica rims $200
-misc glow plug system components such as relays and modules $20
Willing to work some parts into a deal with the car

Has the legendary SD22 all cast iron diesel engine. 50,000 actual miles. Over 400psi compression on all cylinders. 5 speed manual transmission. Has lumber rack and 2" receiver trailer hitch.
has a fresh injector pump, comes with the old one as a spare. Fresh clutch and pressure plate, Comes with a spare clutch and other random stuff. The bungeed chains across the hood are bolted strongly to the frame. They are to use for winching fruit trees out of the ground with a come-along.
like this. http://www.instructables.com/id/Move-Tree/
Has rust and other random body damage. But looks good enough to keep neighbors happy, thanks to a recent metallic blue paint job and hubcaps.
The bad:
One of the rear window panes is broken.
Needs new fuel hoses due to evil biodiesel. Has the fresh injector pump for the same reason.
The mechanic who put the pump in set the timing way too advanced, it had tons of power but didn't start well, so I drove it and parked it and there it is. Needs the pump twisted to retard a bit.
But he's a great mechanic and I recommend you use the same guy to fix this truck.

$2500 firm, that's a good price so I don't have to haggle or show it more than a couple times.
The engine and transmission are worth this much, and you get the rest of the truck for free!
This truck will outlast you, and for sure will outlast me. I'm selling because I got bigger tractors and got a 1 ton truck to move them with. Someone else should have this loveable truck.

reply with your phone# if you're already in love with this truck and aren't a spambot.

Great condition for age, very solid and reliable, these diesel engines last forever and get great gas mileage, very little rust, run with biodiesel (much lower emissions than gas), comes with canopy, rear fold down seats in back, interior looks good, sad to see it go, had to replace with 4x4 truck, trades considered

Great little diesel, fires right up, the truck body and transmission are used up...this motor would make a great swap for another pickup or could work well for a water pump..etc...simple, grease friendly,very economical
the truck will start, run and drive, but tabs are expired and you will need a trailer to pick it up.


NOTE: This one is really rough shape.


Might be a good del for Nissan Cylinder liners and Pistons NOS.
Plus tail lights for a 81 - 82 Datsun PU which are hard to find.

1981 Datsun 720 king cab diesel pickup. Runs and drives good. New tires, ball joints, u joints, good brakes. Starts a bit rough but smooths out quickly. Body is rough rust in spots and floor pans have holes but should be repairable. I have lots of spare parts that can be sold also. Extra trans, starter, alt, doors, fenders, and misc pieces