Thanks, Kassim: obviously, it's not a pushbutton.
Regards,
Al S.

asavage wrote:Alternatively, if you can get a used truck lock, I can rekey it for you for the same price: $30, including a new key. I would have to have your car's keycode or an existing key to do that.

That's the route I'll go-- Gen 1 Maxis show up often enough at the PaP that a decent lock should be available. Then you can rekey it for me.

I thought maybe there was a way to R/R the faceplate w/o destroying anything.
Top

The face cap does not include the shutter (the little spring-loaded door) in this case.
Regards,
Al S.

TruckA wrote:There are two phillips head screws, plus two brass looking pins. I don't want to break anything, so can anyone help me out with the secret of removing the ignition switch?

The two others are security bolts. The heads break off when they come up to torque.

I use both methods. The pin chisel method is slightly easier and less messy, but is not 100% effective.
Regards,
Al S.

I got a couple new keys cut at the dealer...

I took in my original keys with the key code stamped on the key, they werre able to cut brand new keys from the code....

they work but it does require quite a bit of jiggling and playing with it to get them to work....shows how worn the old tumblers are.

odie wrote:I'll probably go get duplicates of the worn out keys made at the local Wally World so the new keys are pre-worn to match the worn tumblers

What I meant was that copying a worn key will not "match the wear in the tumblers".

The key blank is either Ilco X7 or X123, depending on the year; very common blanks in either case.

If your worn key works well but the key the dealer cut by code doesn't, they did a bad job of it (maybe used a nibbler rather than a cutter). I don't know what they did, but I work as a locksmith as my day job and code cut a lot of Nissan X123 replacement keys. Even with worn wafers, a correctly code-cut key is going to work better than a worn key or esp. a duplicate of a worn key, every time, if the code cutter equipment is calibrated etc. If the wafers are worn, a new key may not work perfectly -- some wafers will drag -- but it'll still work much better than a worn key.

I see a lot of code cutting and duplicating equipment that is out of calibration. On older equipment like ours (all non-electronic), we keep a close eye on calibration. I begin to feel the difference when ours drifts more than .003"; the feel of the cylinder when turning the key is different.

Cutting a new key for an old Nissan or Subaru (same locks and blanks) is very rewarding. I must get one or two requests a week for new locks on these cars, and 90% of the time I cut them a new key and they're amazed at the difference -- no new lock required.

Al has cut keys for all three of my cars. They all work perfectly in all the locks on the car. I think that since the driver's door and ignition see more use than the others and the key still works perfectly in all, it really shows the value of a properly cut key.
Matt B.

Carimbo's '82 is apparently some hybrid. His truck lock was vandalized last year. I've been working on assembling a replacement from new parts.

ASP B-16-105 is the part No. for what is supposed to be the correct trunk lock for Carimbo's 1982 Sedan. However, it has both the wrong tailpiece and the wrong stop tab on the lock housing.
(click on any image for larger) 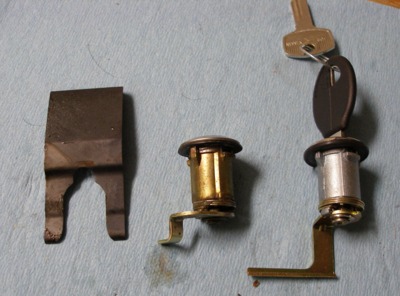 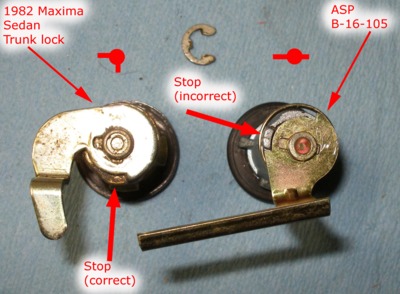 Replacement tailpiece ASP P-16-367 is closer, but centre hole must be made larger (I used a Dremel) and slots slightly filed to fit end of lock core. Worse, a lot of clearancing work is needed to allow the tailpiece to fit over the housing tab and turn 90°. 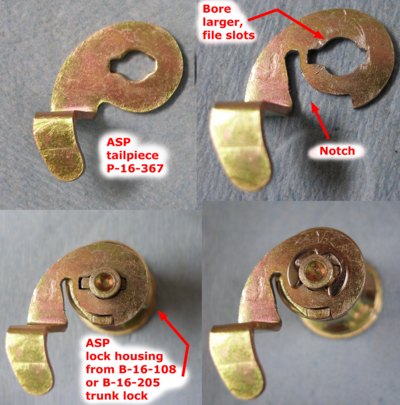 At this point, the recipe for this particular trunk lock with the X123 keyway is to use: Carimbo is going to try to mount up the new lock when the weather clears a bit, and see if it works.
Regards,
Al S.

Carimbo reports that it fits and works well.
Top

Re: Maxima locks, keys, and keycode

Covering the Nissan '80s style ignition and providing pics was extremely helpful. I found this after researching for this exact thing, but was having a hard time finding pictures of the outer housing and spring - and this post did not disappoint! Thanks guys! -Chris 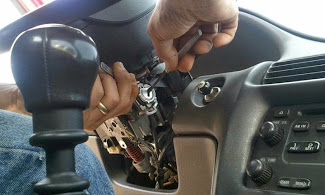 I use both methods. The pin chisel method is slightly easier and less messy, but is not 100% effective.[/quote]


I have used an automatic center punch for years to remove ignitions that need to be repaired. Some grind the end to a chisel but I prefer to keep a sharp point so it digs in to the head of the bolt and is less likely to skip off. To re-install I use the dremel method to slot the head and a ratcheting 90 degree flat head to get the ignition mounted tight.
Oklahoma City Automotive Locksmith
Top
Post Reply
29 posts