A while back I "purchased" a CD off eBay that purported to contain the Nissan Parts Catalogue 1978-2002, including the 810/Maxima/Bluebird/Skyline etc. stuff. It appears to be a copy of the dealer program. It runs poorly, and I didn't spend much time on it, but if anybody wants to learn how to use it etc, here's the ISO file for burning to your own CD:

The application is scary to install. But I did manage to get it to come up and do something, just not very useful stuff. I'm pretty sure I got ripped off, but perhaps one of you is more patient.
Regards,
Al S.

The thing is, I can't reliably do part number lookups with this thing.

For example, I'm supposed to be able to type in a VIN and have it auto-fill some fields, but it doesn't like my VIN.

And choosing from the Models list (56 models), I have Maxima (which does not go old enough) and Bluebird (which is the right years, but no LD28 or AT, only LD20 and MT).

I think this may be a non-US-models parts catalogue.
Regards,
Al S.

zoltan wrote:Is there a parts CD out there which one could use to look up factory part numbers?

I bought this one for a tenth of what it's worth, off eBay about a year ago: 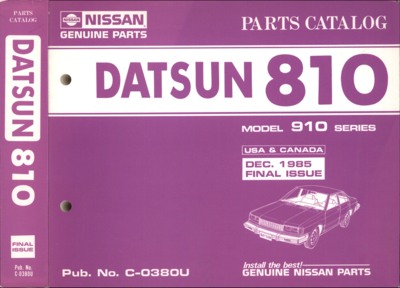 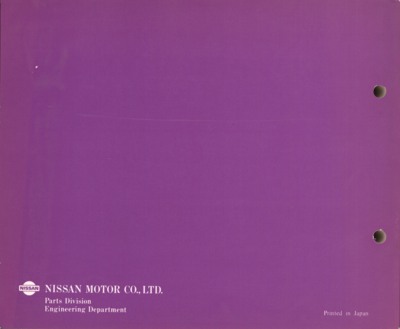 And I've never found another one -- believe me, I've looked!

DML has an old, right-hand-drive version of this Parts Catalogue for $20, but it's of limited usefulness IMO, because it probably doesn't cover US-spec 810s.

I haven't found an effective way to Google for them either. I do run a canned search for them on eBay, but only ONE has ever turned up since I bought mine -- and a member here missed buying it by that much for some reason

[later]
I suppose I could contact Nissan about them.
Regards,
Al S.

asavage wrote:I think this may be a non-US-models parts catalogue.

Sounds right, the RHD copy of the 910 parts catalog I have (hard copy) doesn't show LD28 engine option, only the LD20, so it does sound like you have the non-US version.

Years ago someone was giving away copies of the VW Etka parts application...very scary! Never could get it to run without crashing.

A while back there was a microfiche version for the 810 on E'bay. I let it get away the first time, but contacted the seller, and he relisted it for me. It is from April 83. The publication number is C-0380U. It is on 5 fiche. I don't have a fiche reader. I tried scanning it, but couldn't get useable detail. I have thought about getting it converted, but don't know what that would cost. Might be hard to get it done anyway, as it is copyrighted. With the right equipment it could become a PDF. That would be nice.
Matt B.