My LD28 is a marine version and I'm working on having an onboard spare parts kit. I'm looking to create a fairly extensive list because my past Yanmar 3GMDF and Mercedes 190D 2.5 experience is that I never need what I actually have -- just those items I don't have: A variation of Murphy's Law.

Both the Service Manual and the Parts Catalog show the injector (from top down) consisting of: a threaded "el" with two ears for the studs in the head, one or more shims, a spring, a push rod, a spacer or "Distance Piece", a nozzle assembly consisting of needle and seat and finally a retaining nut that screws to the top "el'' and holds all the above pieces together. Under the injector goes what the Parts Catalog identifies as a "Gasket" that I assume is the item the Service Manual calls a "small washer".. that "..should be installed in the specified direction" -- a new one of which should be installed whenever an injector is installed. The small washer appears to be the Parts Catalog item identified as a "Gasket 16617-V0700"

My confusion is that the Parts Catalog contains a listing for 4 additional parts that appear to go under the injector. The parts are listed as What are these additional 4 parts? Are they fixed in the head or do they come out with the injector? What parts need replacement upon the installation of an injector in order to maintain proper sealing?

I'm at a disadvantage here since I've never had an LD28 injector out. I can pull one out of my parts motor and report what I find. You have at least as much reference material as I do, and if that isn't clear, my only thought would be some real world exploration.
Matt B.

I have been servicing the LD28 injectors as an assy, and not disassembling them.

From the generic LD engines manual: 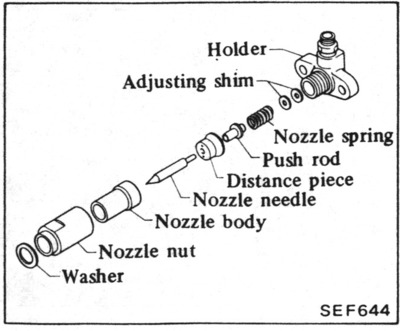 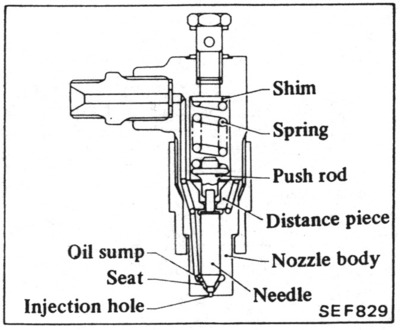 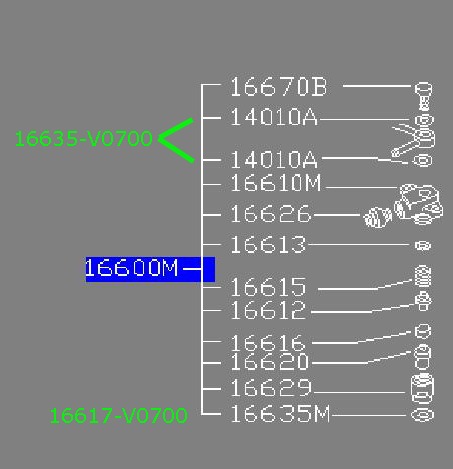 For servicing the injector as an assy., the part Nos. in green above are the washers you will normally want to replace (or anneal, as the circumstances dictate). The lowest one often needs a bit of fiddling to remove. It will not come out with the injector. I was able to fish it out with a section of baling wire with the end formed into a acute angle: a hook. SD owners can have a much more difficult time of it, but the LD ones I've been able to fish out this way, with little fuss.

The upper washers seal the return line and its banjo fitting: two per injector, (12) per engine.

The "adjusting shims" are for tailoring the pop pressure; they're shims and you never change them, even if you are doing field service, unless you have a test setup. There seems to be fifty-one different thicknesses of them, and a separate part No. for each. Two or three thousandths difference there makes a big difference. If you have to disassemble an injector at sea to this level, reuse whatever shim is in there.

I see the parts you are wondering about 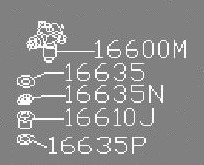 I admit that I do not recall seeing these in my engine, and the Service Manual does not seem to mention them. Interestingly, the part that the paper parts catalogue calls "Support-Nozzle" (16650-V0700) is named by Nissan FAST as "Protector-Nozzle", at six per engine. Sounds like a heat shield. Except I don't recall one being installed on mine.

BTW, revere and treat with respect you paper Parts Catalogue, as they are exceedingly rare. I own an '85 version (last and final for the 910) and have seen one other, in years of searching. They are highly prized and valuable. The Nissan FAST parts application is not nearly as much fun to use, though it does have a couple of features the paper version lacks.

I hope this helps. Keep an spare IP belt, and perhaps a tensioner assy., on hand.
Regards,
Al S.

There is also a larger copper washer, I think it seals the outer injector body (nozzle nut) to the head. Size more like a garden hose washer. Somebody mentioned to look for it listed in the engine gasket section.

I took my used ones (large washers) to the injector rebuilders where they measured them and supplied me new ones. These cannot be too thick or the heat shield washers will not make proper contact, causing the high prechamber temps to destroy the injector exposed surfaces.
Top

Thanks for the comments -- now I know which seals to get for my spares kit.

I guess we'll just leave the question of where these additional parts go (if anywhere) until someone (in Tennessee?) looks closely in an injector hole to see if stuff is hiding in there.

BTW I do love my parts catalog. It is Dec. 1982 issue and I bought it at Books 4 Cars in Seattle. Not cheap at $54 including tax but worth it in terms of parts shopping.

Thanks for the comments -- now I know which seals to get for my spares kit.

I guess we'll just leave the question of where these additional parts go (if anywhere) until someone (in Tennessee?) looks closely in an injector hole to see if stuff is hiding in there.

BTW I do love my parts catalog. It is Dec. 1982 issue and I bought it at Books 4 Cars in Seattle. Not cheap at $54 including tax but worth it in terms of parts shopping.

LD28 Owner wrote:BTW I do love my parts catalog. It is Dec. 1982 issue and I bought it at Books 4 Cars in Seattle.

I know that one -- I found it in Mar-06 and posted it, but didn't need it, and it doesn't cover the later years, so for my purposes I couldn't use it.

Books 4 Cars.com has me a bit peeved right now. I ordered two Toyota diesel manuals totalling $118 from them via their site on 26-Sep. They are about 50 miles away from me, straight line (but 2.5 hours, due to the geography of Puget Sound). It required four days for them to get it shipped, another day for USPS to get it to me, and they sent only one manual -- in an envelope. It arrived damaged, of course. Brand-new manual, with divots in it. I called them up and asked them what they do for a living, because it doesn't seem as if they ship books.

Next problem: only one manual arrived. I asked, they said it was backordered for two weeks. Why did their site not tell me that? When was I supposed to figure that out? They didn't send me an email telling me that one item had an ETA of two weeks (though I did get a confirmation email that my two-manual order was received).

Today, I called them again, because it's been three days shy of a month, and still no second manual. They "received it today" and will ship it immediately.

I'll feel lucky if I see it next week. I do not think I'll be ordering from them again.
Regards,
Al S.

I understand why my '82 Parts Manual wouldn't work for you but is great for me as my focus is just on engine parts.

Books 4 Cars has worked well for me as, while I'm only slightly closer than you as the crow flies, I'm much closer as the car drives w/o ferry and I just go there, look thru their inventory and buy in person. It is an interesting place -- great browsing and I never get out in less than 1 1/2 hours. The inventory is well organized and the staff helpful. I always find something. It is trick moving around in the place -- it is jammed with material (the Datsun/Nissan inventory is located in the mailroom and while scanning it you are actually blocking ingress and egress) and they have a lot of staff for the size of the place. While it isn't really set up for walk-in customers, we're not a problem for them because they only get one or two walk-in's a day -- almost all of their business is on-line and call in.

I'm not surprised about them not having a book that is on their inventory system. I was interested in an '81 Diesel FSM that showed on the inventory and wasn't in stock and I noticed the '82 Parts Manual I bought still shows on their inventory -- the system is clearly not real time.

I've noticed when I've been there that the staff take phone calls and then go pull books so a better way to do business with them might be to check the on-line inventory, phone and have them pull the books for you. You'll then have no back order surprises.

While the prices aren't low, they have stuff that you won't find elsewhere.

A better place for good deals is Amazon -- I notice their partners have some good deals on Datsun/Nissan FSM's.

P.S. Are we getting off topic here?
Top

Thanks for the in-depth background on Books4Cars, I appreciate it.

Good think you didn't get the '81 Maxima FSM, because there is no diesel info in it. For 1981 only, all the diesel information is contained in a completely separate Supplement (for both the 810/Maxima and 720 FSMs).

Or, maybe you meant the 1981 Diesel Supplement, in which case it would have worked OK for you I suppose.

I use a canned search on eBay to find manuals, but that only works if you don't need one right away. I've amassed a pretty good collection of Nissan FSMs, patiently, and I buy up spares for folks who join here and don't know yet that they absolutely have to have one.
Regards,
Al S.

I have no idea about the additional parts shown in the diagram. One of them is probably the large washer that Carimbo mentioned. When I pulled my injectors I found the two washers at the top that seal the return line banjo fitting. I also found the small washer at the bottom which has to be be fished out with a hook. In cross section it is more or less a U shape. The concave side was up on all of mine.

The remaining part is the large washer which Carimbo mentioned upthread. It would really be nice to figure out the nissan part number for that large washer, but I think it could normally be reused. It is interesting to note too that this large washer is only mentioned in the Maxima FSM in the exploded view of the engine. I find no other mention of it. Feel free to prove me wrong.
Matt B.