We have enough devices in the house now that run 1000base-T that it became time to upgrade their intervening switches. I picked up a 3Com semi-managed switch (3Com calls it "configurable") for the server room. Yes, I have a server room

The used 2824 arrived, I plugged power to it, and the noise! One locked up fan, and one that sounded like a cat having kittens. No way am I having that in my house. Removing the cover involved cutting a "Warranty Void if Broken" sticker (snicker), and a lot of careful prying. The cover really doesn't want to come off. I removed the obvious screws, and massaged at the cover for several minutes before determining that only more force was needed: pull the cover straight back, about 3/8", and it comes right apart, but it ain't obvious, and it's plastic, so it could break if you pried the wrong way.

Lots of dust. This wasn't operated in a strictly clean environment, but few are. 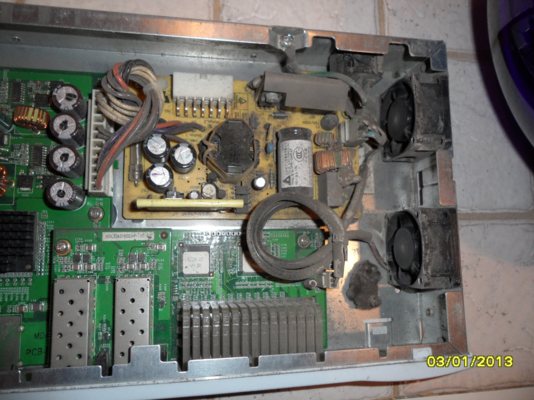 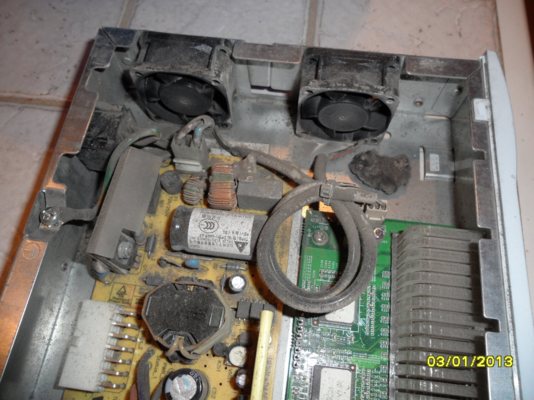 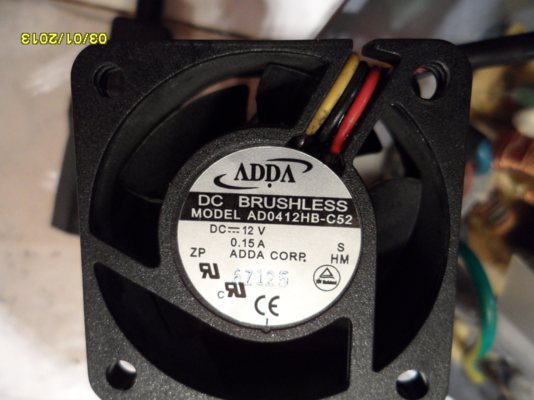 Because I don't really need the reserve cooling that this has -- it's designed to operate in a rack, perhaps an enclose rack, and some folks don't put enough A/C in their server area to properly keep things cool -- my first thought was to replace the 12v fans with 24v versions, have them run slow. The unit would have given a Fan Fault error because it monitors the fan speed, but I could live with that. Unfortunately, the vendor I chose shipped me 12v fans, even though I'd specified 24v. 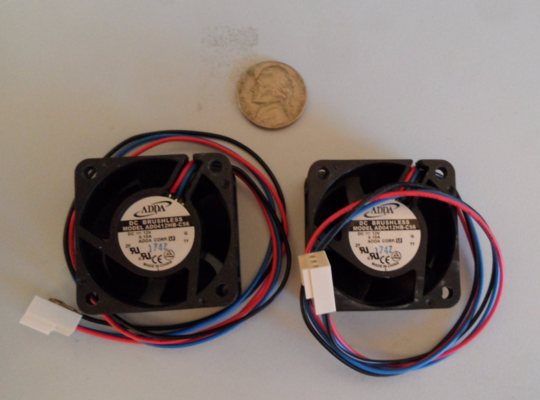 I plugged one in, just for fun, and it was nearly as noisy as the old ones, though a lot smoother in operation. I sent them back.

After some reading, I ordered a pair of Sunon HA40201V4-D000 fans. These have a fancy MagLev bearing that Sunon has high claims for. They do not move a lot of air, but in compensation are quiet. 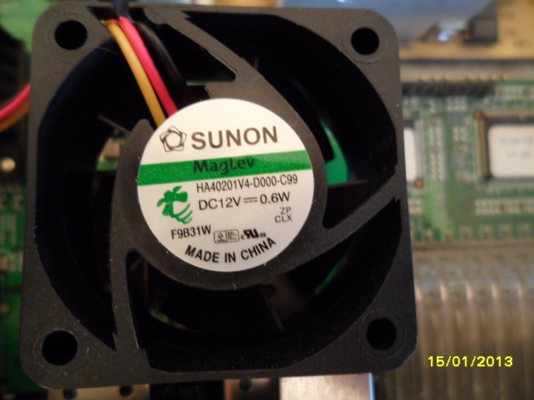 The connector pin spacing is off for my application. I went ghetto and did a little bending of the board's pins; if I was being paid to do this, I'd have cut off the old fans' connectors and soldered 'em to the new fans' leads, but this situation is "robust-enough" for the use I'm putting them to. The connectors will not lock to the board, of course, so you couldn't expect to ship the thing and have it arrive with working fans. 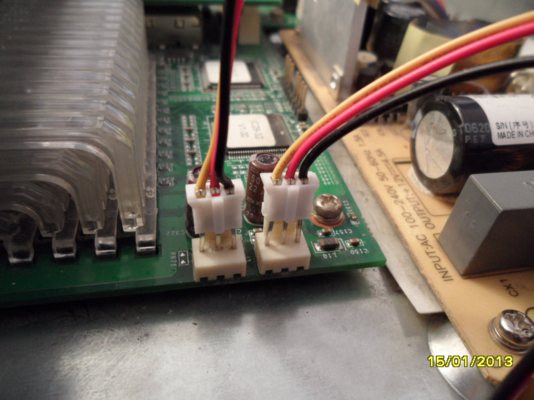 The noise reduction is incredible. I literally cannot hear them at all in my server room, and even in a quiet room, they're very quiet.

If I can get a few years from them without crapping, I'll be happy.

Should have tried hooking the two fans together in series...

One of the old fans was obviously failing, and you can't relube BB fans like you can sleeve bearing fans.

On the new ones that were ordered 24v but came 12v, I didn't get what I paid for, and didn't want anything to do with them.

The Sunons are nice & quiet

The old 'six gun' was as popular as the cell phone in its time and just as annoying when it went off in the Theater.
Top

One of those Sunons is now intermittently noisy, so four years was the life. I'll open it up when it bothers me enough.
Regards,
Al S.

If your patient enough your hearing will degrade with your age and you wont hear anything.

Appears to be 4 years exactly, nearly to the day.

Thanks for keeping us alive Al.
Retired Pauly
Problem with being retired is that you never get a day off.
1987 D21-J SD25 KC
KJLGD21FN
Top

While I have had the replacement fans for, like, eight months, I never got around to replacing them in the switch.

Yesterday, I replaced the 3Com with noisy fans with the HP with no fans. Silence!

Anybody want a 3Com 24-port network switch with two new replacement fans in a box? I'll make you a helluva deal. (This is a time-limited offer.)
Regards,
Al S.

I was replacing the noisy fan on the 3Com, in preparation to either keep it as a backup or sell, and I found something odd.

Interestingly, the fans I bought and just installed tonight are the exact same part number as the ones I replaced in Feb2013 (Sunon HA40201V4-D000), but the 3-position connector is now larger, and fits the 3Com correctly.

Users browsing this forum: No registered users and 12 guests