The BEA MS08U is a presense-detecting sensor that uses microwave technology to sense an object in its field of view. It's range is adjustable between 4-24". It's typically used to trigger a door operator (automatic door).

A problem I've run into is that people will be in the habit of slapping the shit out of a physical switch, and even though this switch clearly states, "Wave to Open", some people will still beat on it out of habit.

The wall plate is plastic. The sensor clips into it. If you flex the wall plate, the sensor can become unclipped. I've been fielding a lot of service calls for the sensor sitting in the wall box instead of clipped to the wall plate. I tried the fix below on three of them today; time will tell if it is effective. 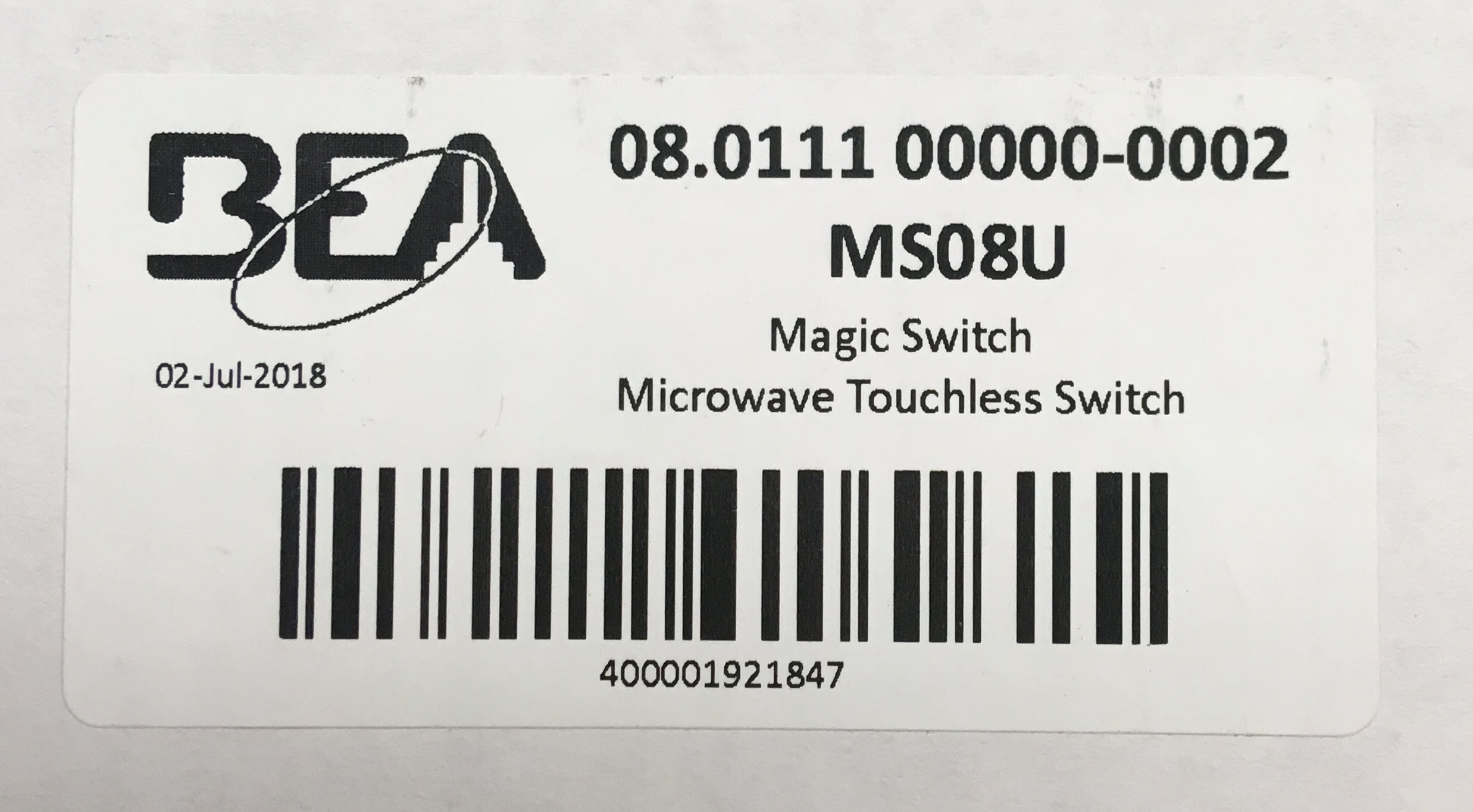 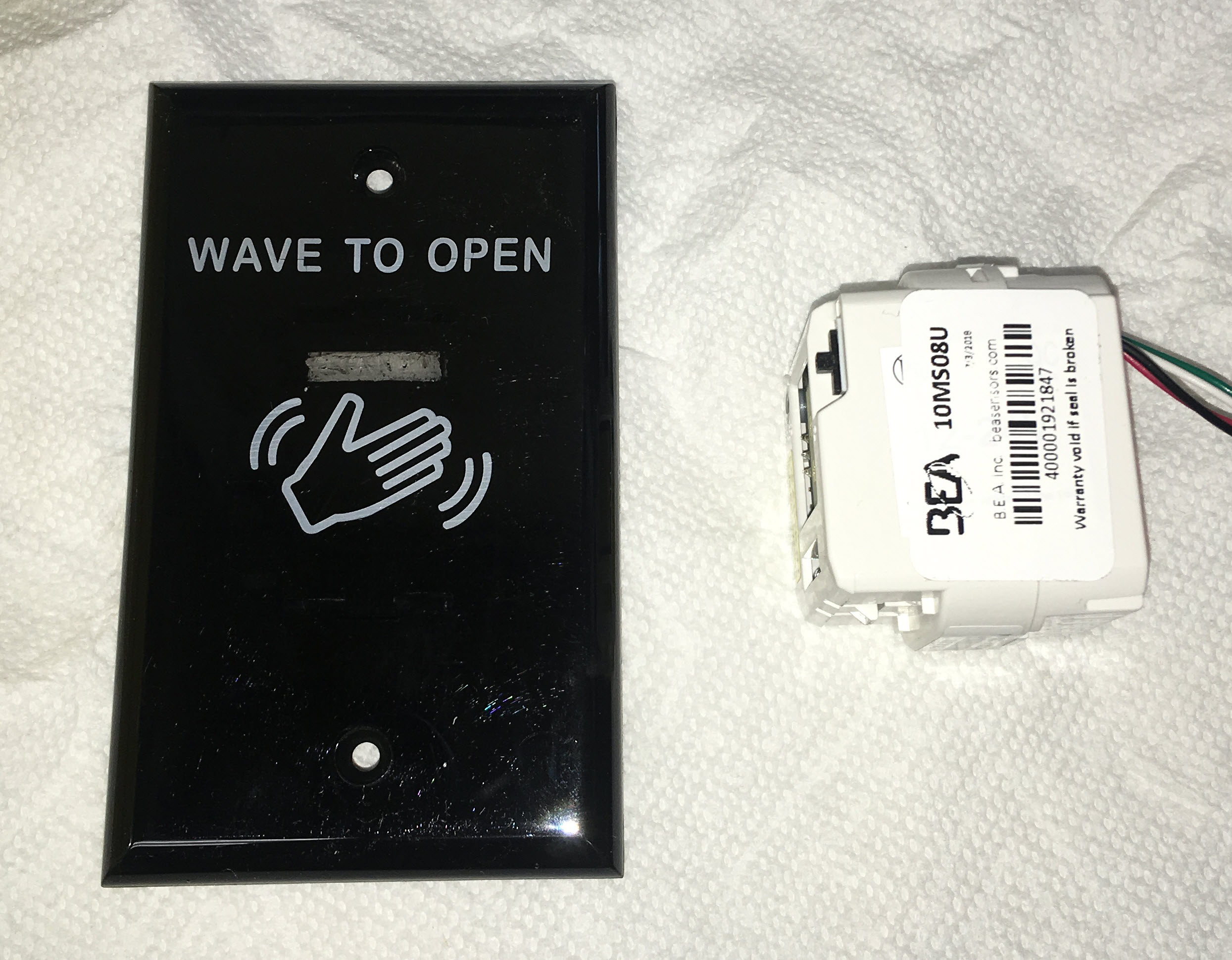 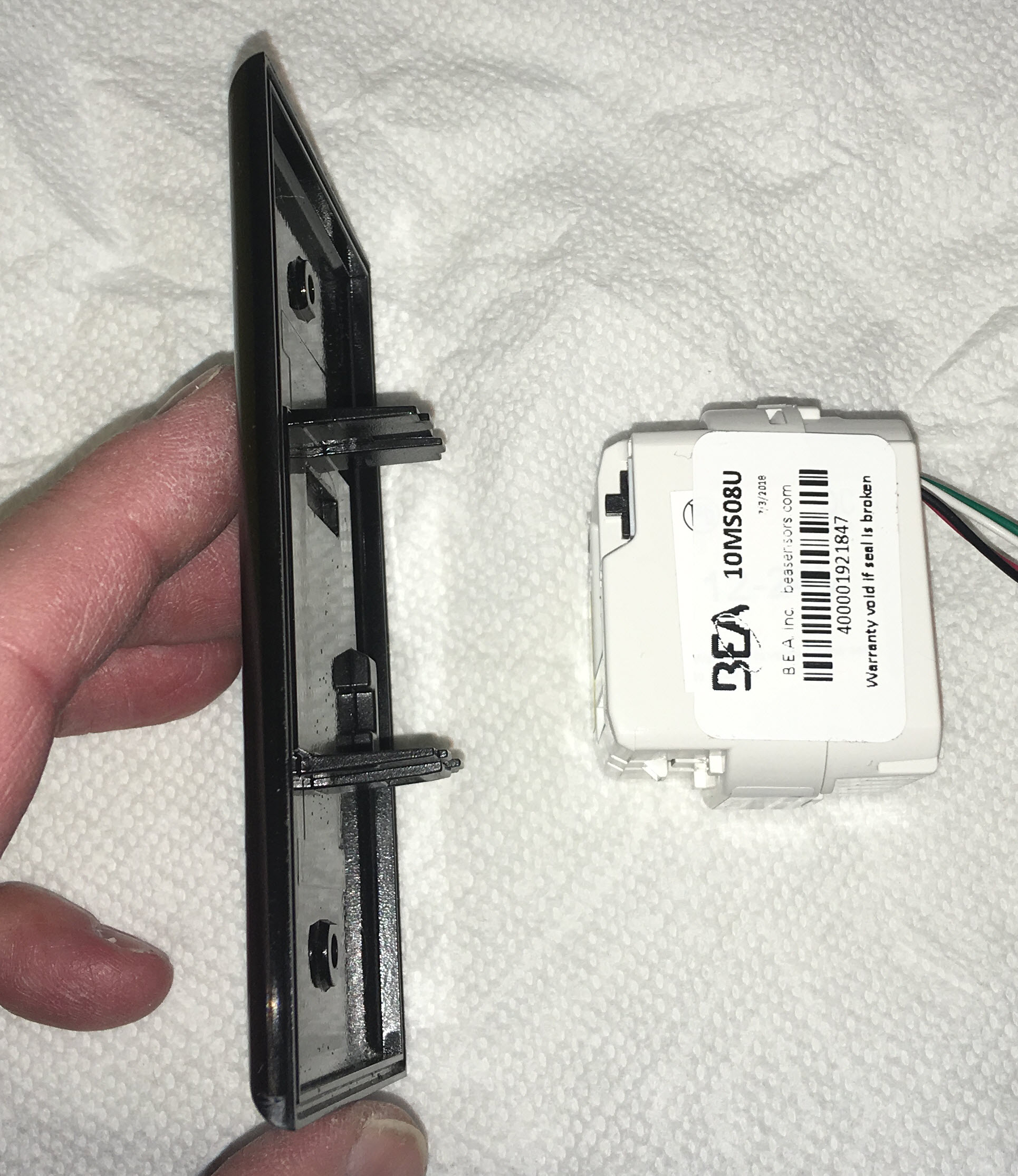 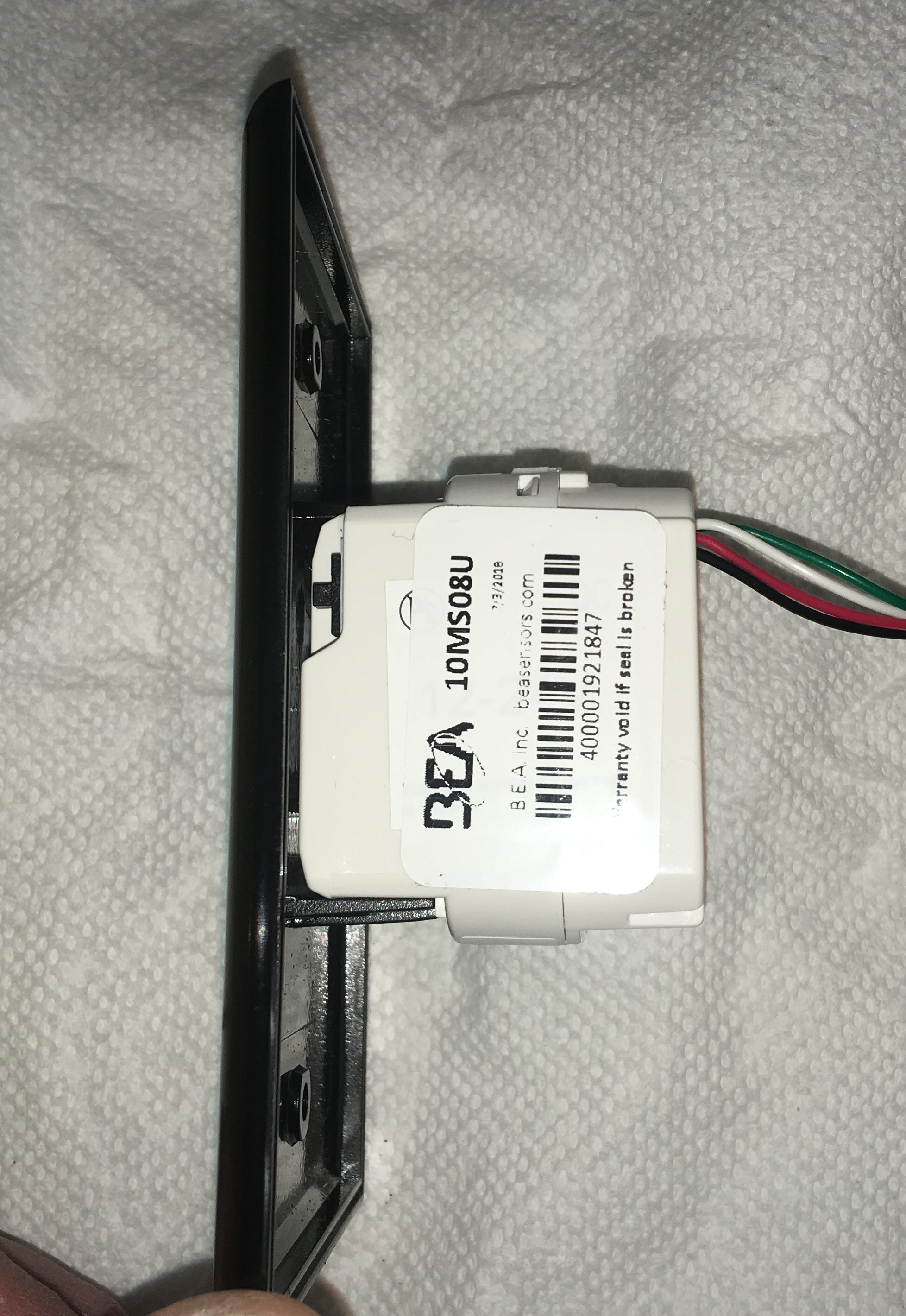 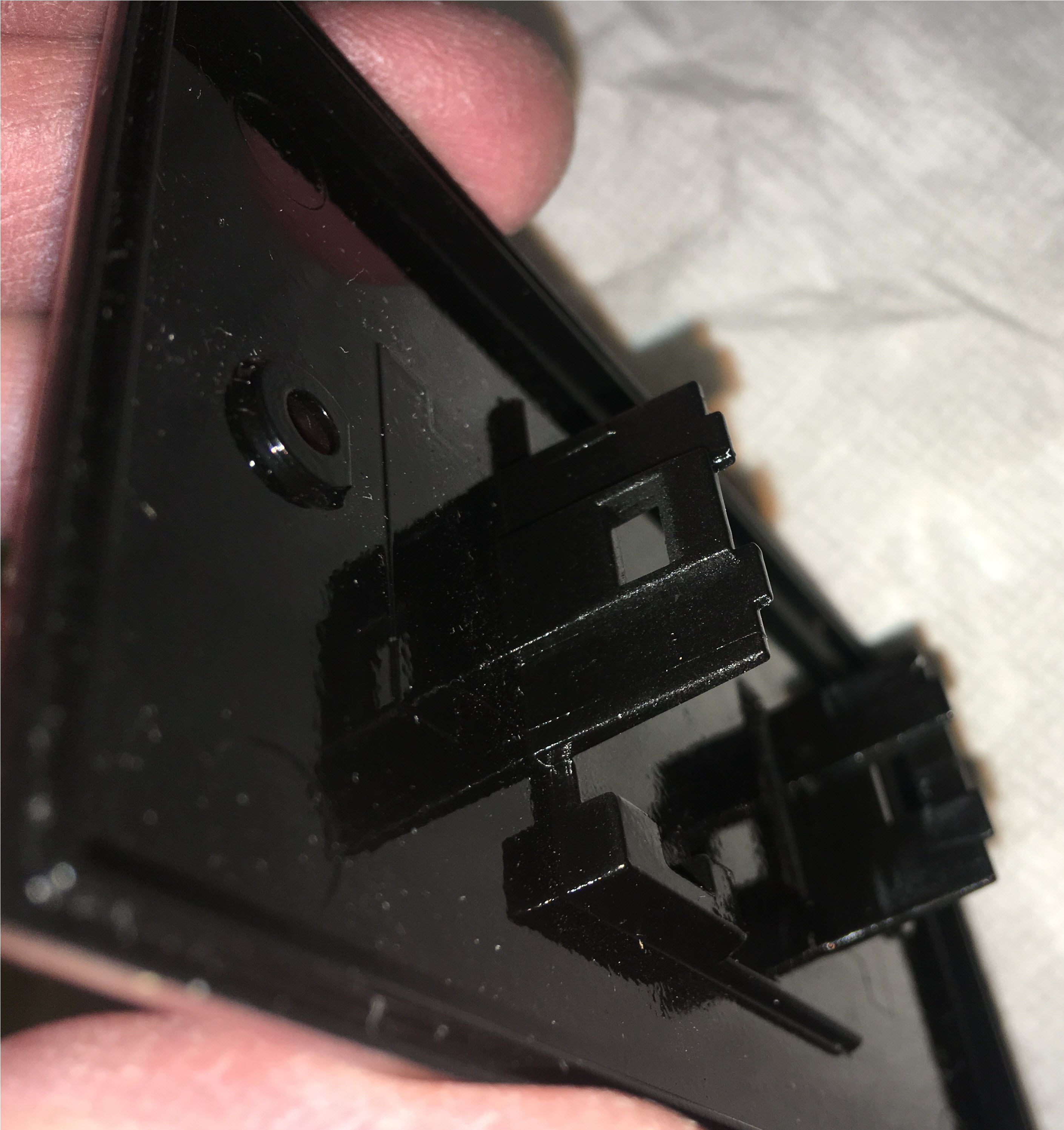 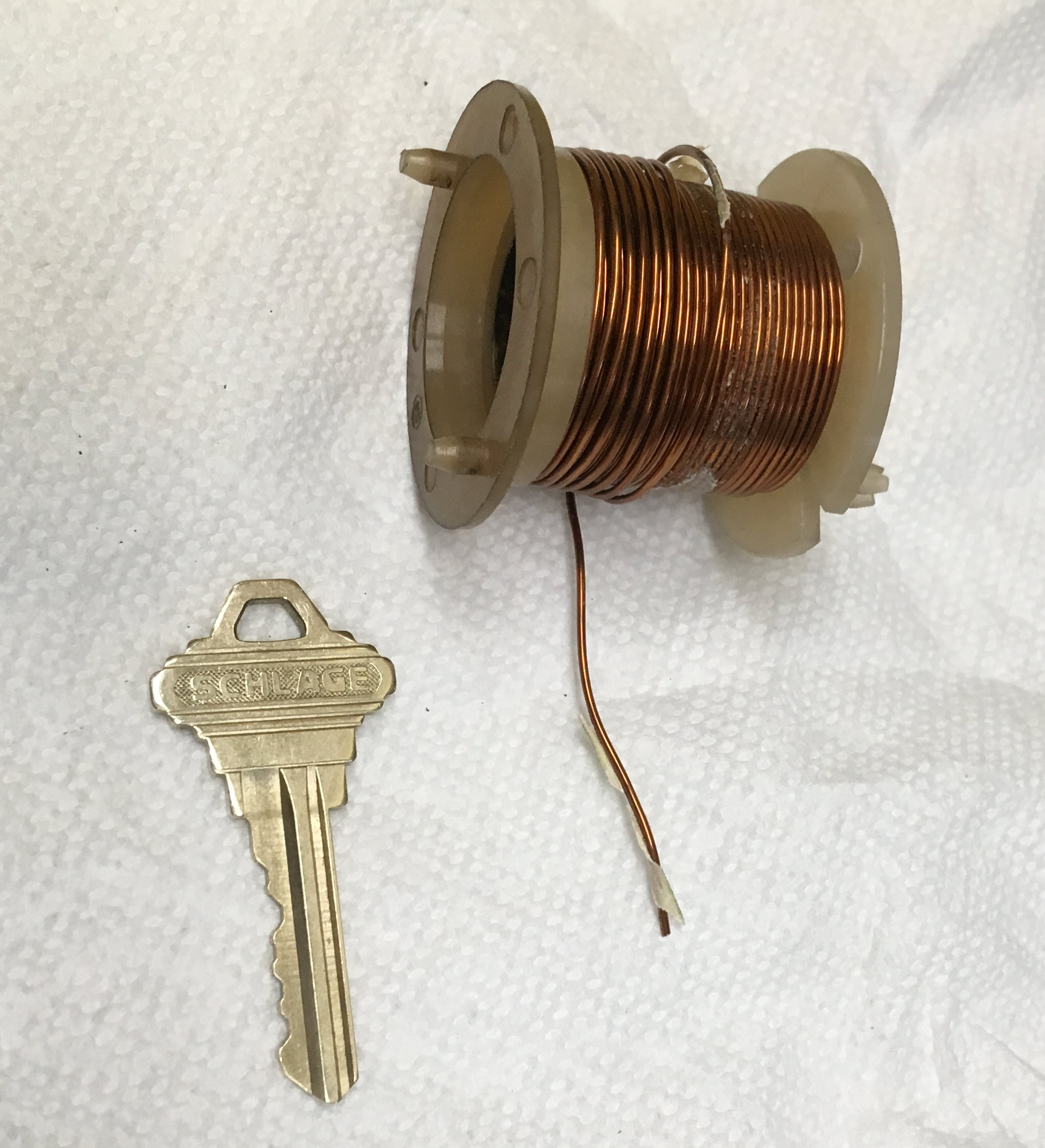 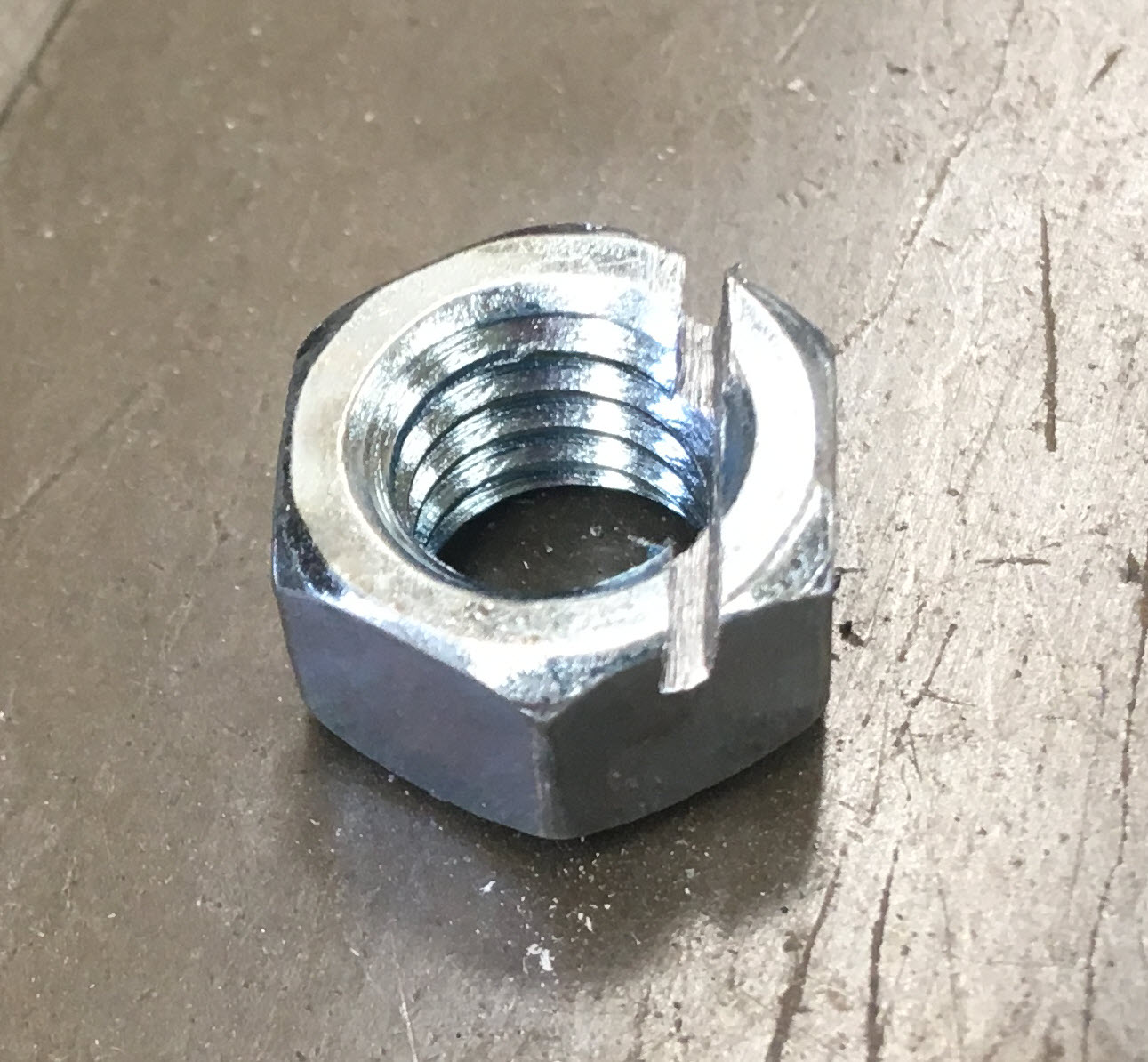 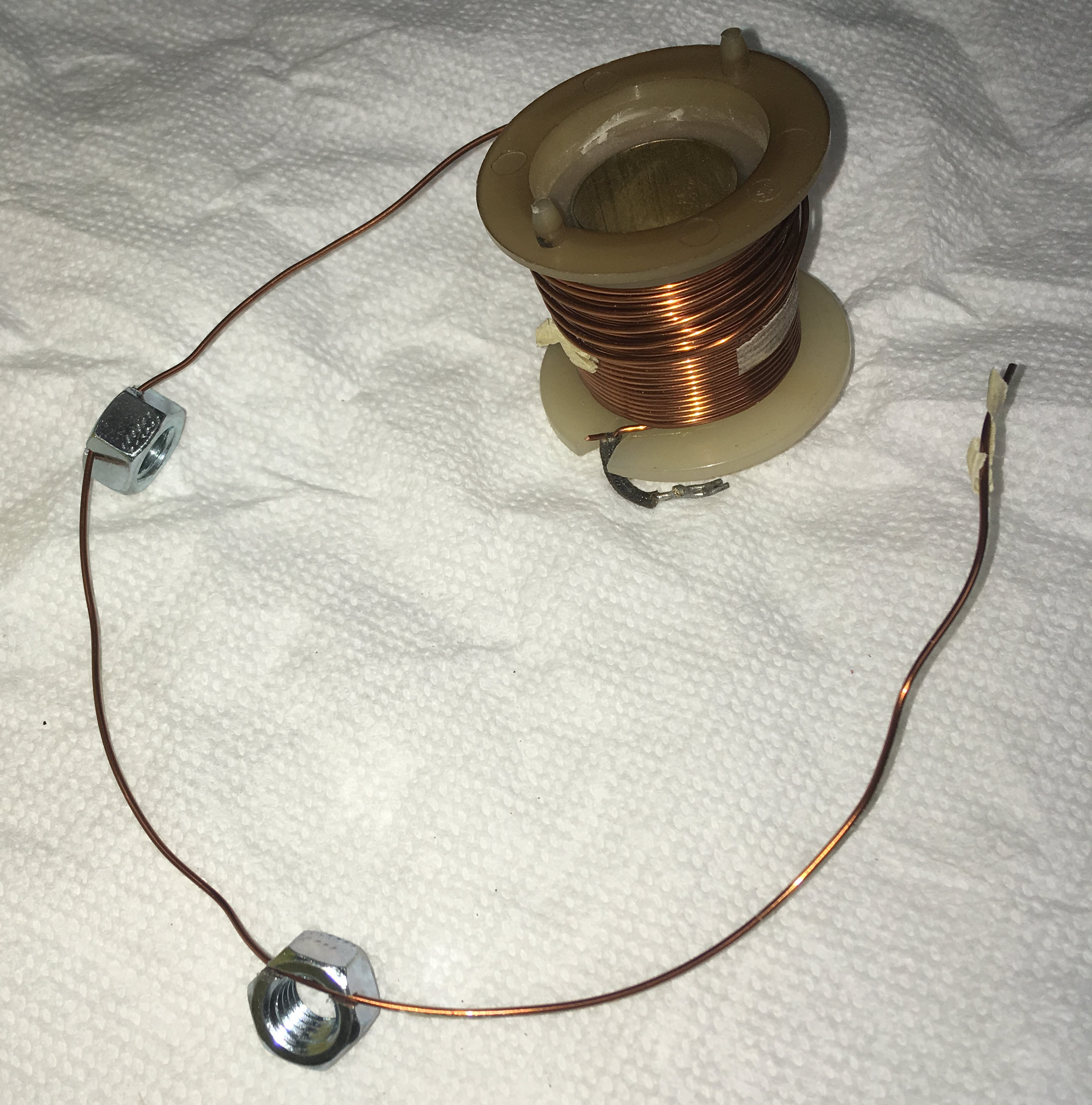 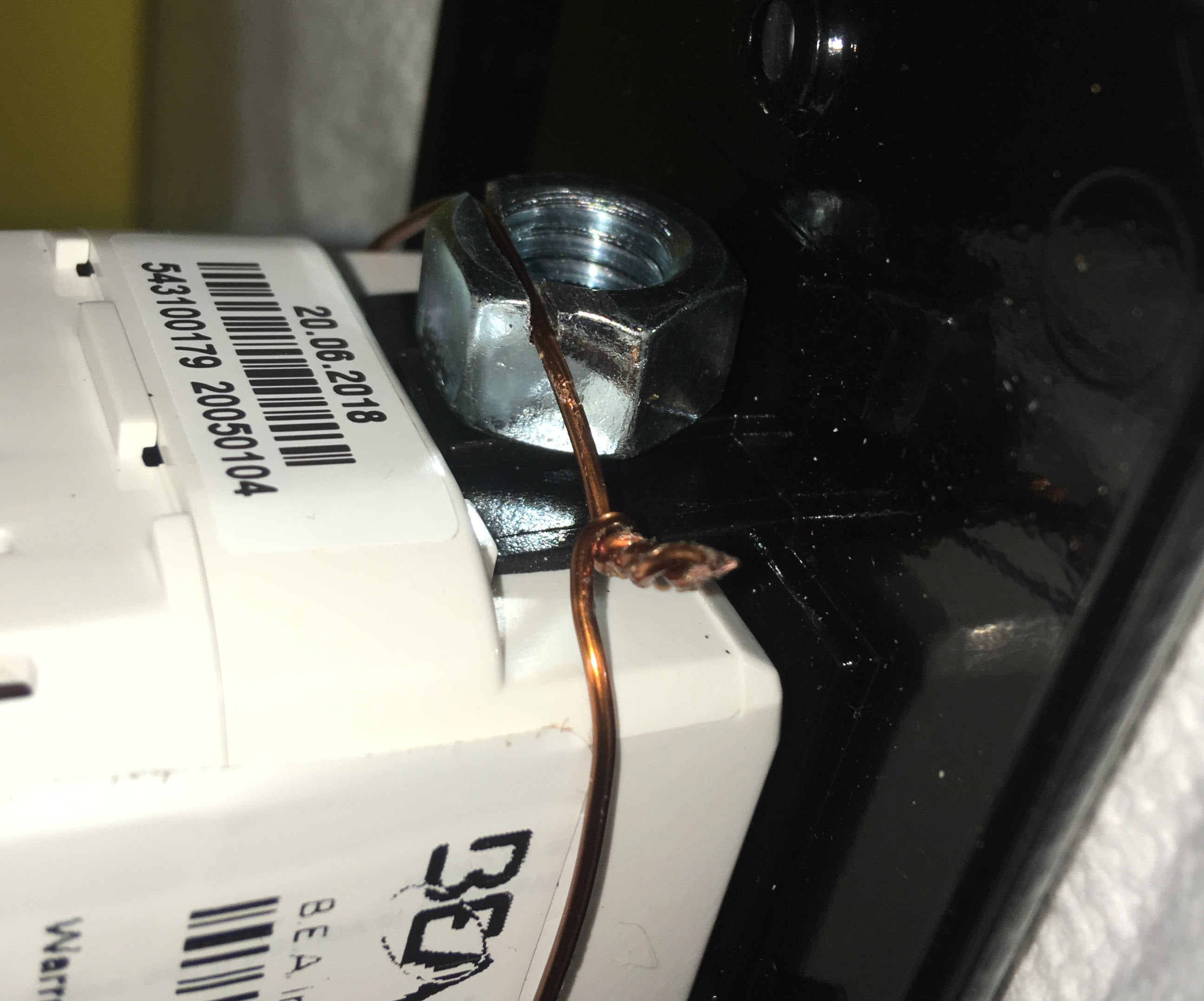 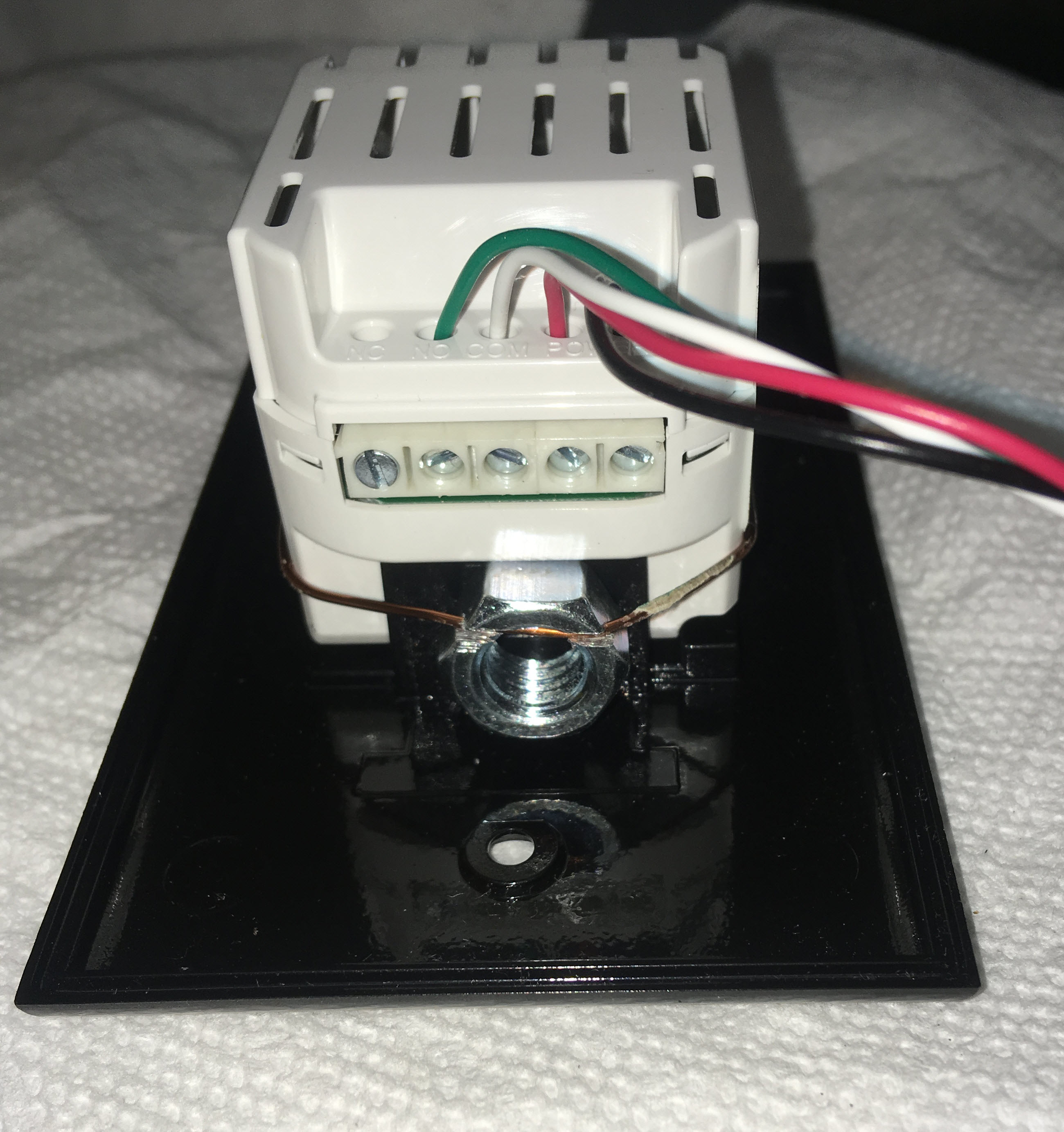 That seems like it should work. Even if the wall plate flexes, the wire still holds tension on the snap brackets against the sensor body.

I am most impressed by your camera's ability to finely focus on such close up shots. Which camera is it and what is your method?
Top

A quick fix that does the same thing without any prep is to use the 2 nuts and a zip tie thru the nuts, but your way will likely be more solid.
I know the voices are not real,
but they have some really good ideas.
Top

In the past, I just used the copper wire, but it didn't work because there was no tension on the black molded clip arms; they weren't getting any tension from wire, since the clips are narrower than the sensor module. That's what the 3/8" nuts are for: to get the tension to the back of the clips.

I took those pictures with an iPhone SE, which is like a iPhone 6Plus except it's got the physical form factor of a iPhone 4 (smaller, that is). It's a fairly poor camera, in my opinion, with the macro focus only fair, but if you stay out at least one foot or more, it works OK. I post-process in software, which helps.

The built-in flash is especially bad on shiny surfaces, but that's the nature of one-size-fits-all LED flash units. However, the phone is always on me, so I tend to use it for low-importance tech shots. If I'd doing anything important, I use my Nikon Coolpix or my older Samsung TL110, which does quite good macro shots.

These pics are helped by the color contrast of the parts being photographed.


Wayne: nope, the sensor is wide enough that the added width of even small nylon wire ties will prevent it from installing in the wall box. Same problem if I turned the nuts sideways: too tall, won't clear the metal sides of the wall box.

Commercial wall boxes are metal and have folded-over aperture design, so the opening is smaller than, say, a metal rework box or a residential plastic box.
Regards,
Al S.

I had another one today, same problem: they hit the face plate hard enough to flex the paint off the back. The clear plastic is painted on the inside, and the paint is not as flexible as the plastic.

Despite the appearance, the plastic is not cracked, only the paint. 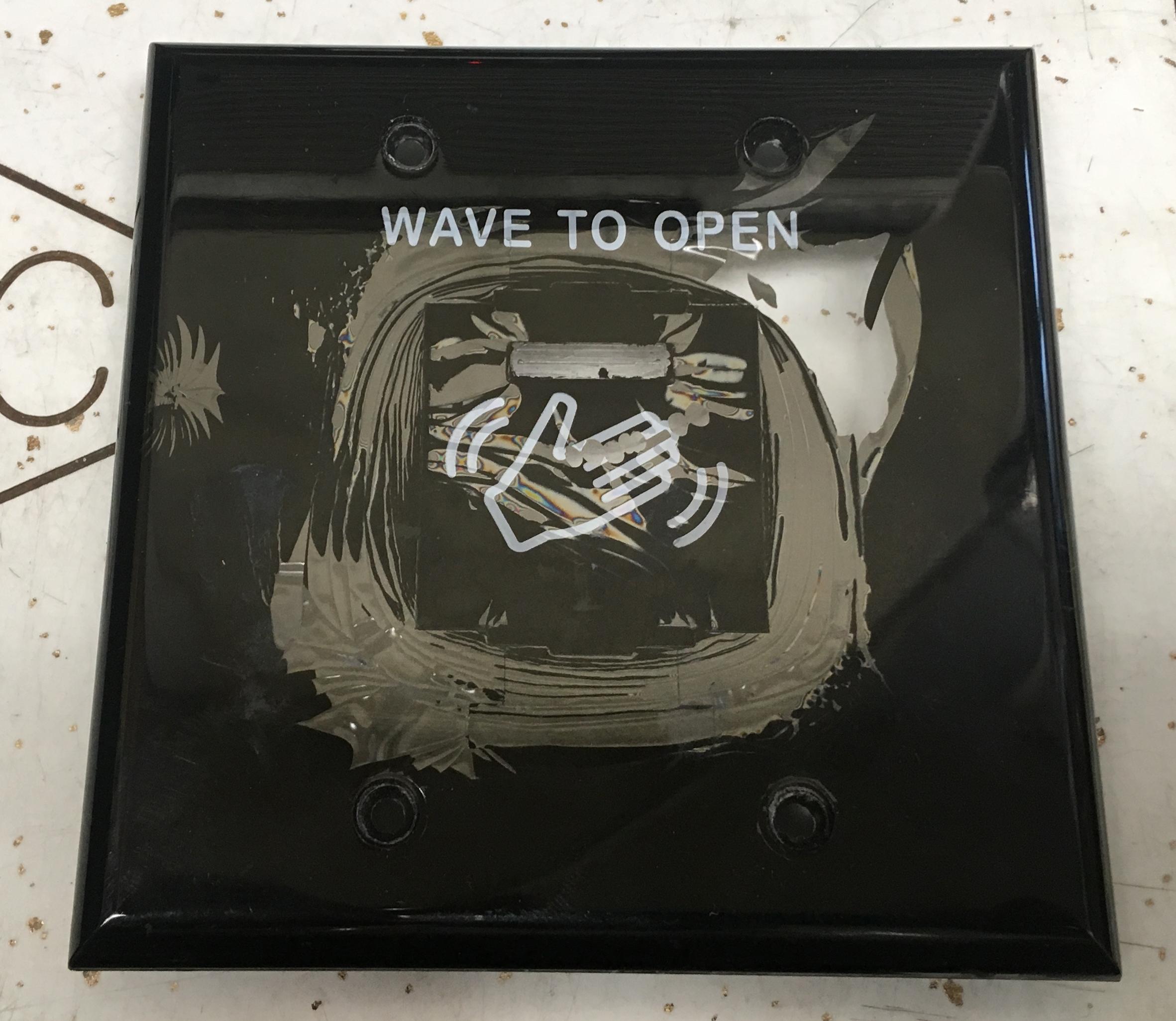 
I used the same method to repair, though I replaced this wall plate with a spare. And I cut the slots in the nuts wider (two passes with the bandsaw), so the wire isn't as tight to fit in the slots.

The pics I took above were very helpful in reminding me what I'd done the last time. As you get older, notes to self become more important.
Regards,
Al S.

I've now switched from installing the MS08 to the MS11, which has a SS front plate and no clip mounts for the sensor, so this thread is obsolete for me.