An EVSE (Electric Vehicle Supply Equipment) is a charging station, not a charger. It supplies AC current, typically from 120v to 240v (but can run up to at least 277v in single/split phase, and 400vac in three-phase (Europe, etc.) systems.).

For L1 & L2, the actual charger is onboard the vehicle.

There are a LOT of mfgrs of EVSEs. I bought an OpenEVSE charging station for my first EV in Aug2017, for $600 for the Advanced version, assembled (I did not have the time to assemble myself, though I would have loved to). 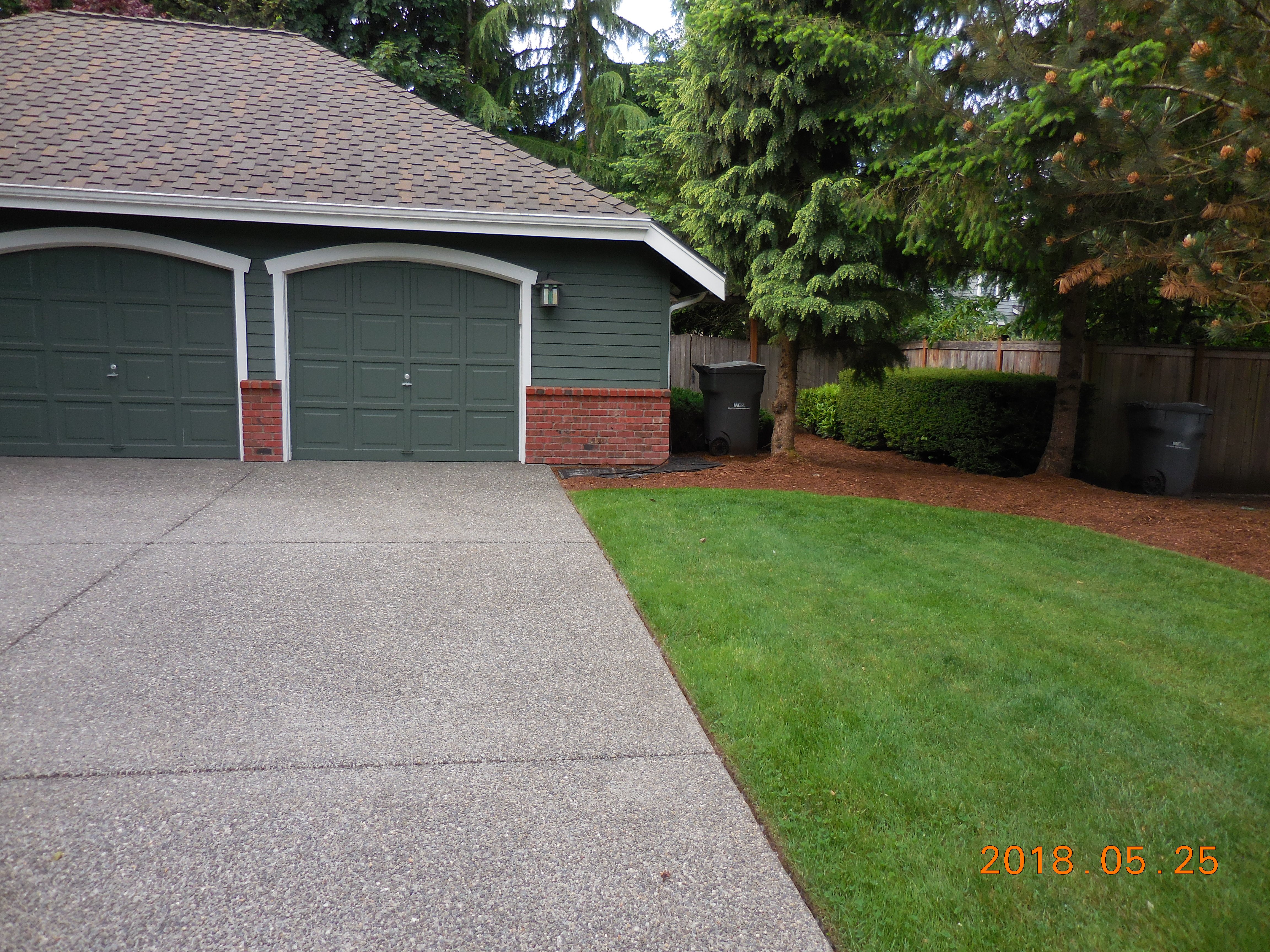 Where I park the RAV4 EV. The tree on the corner has since been removed, as it was fouling the garage's foundation.
EVSE_01b.jpg (3.48 MiB) Viewed 153 times 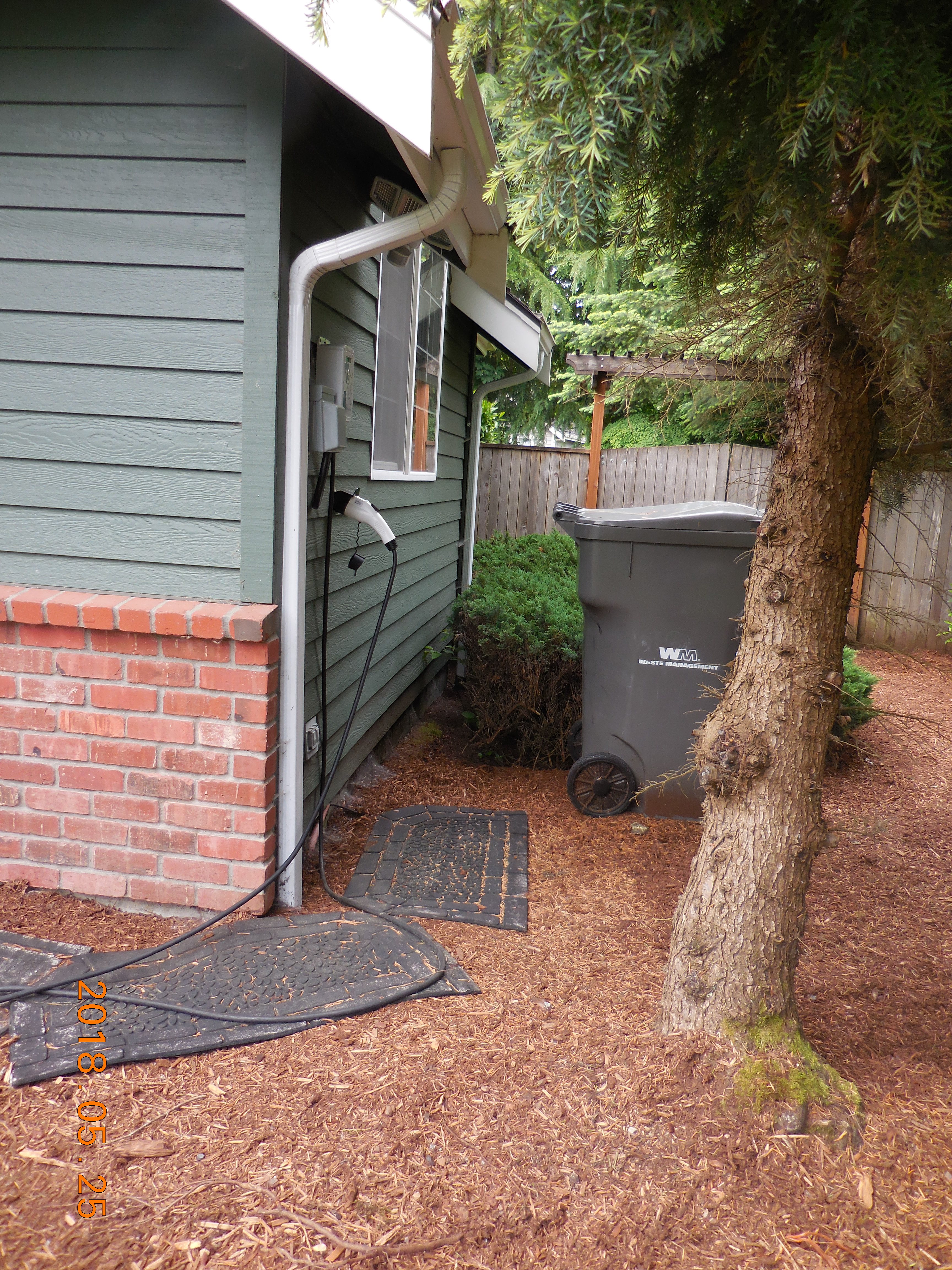 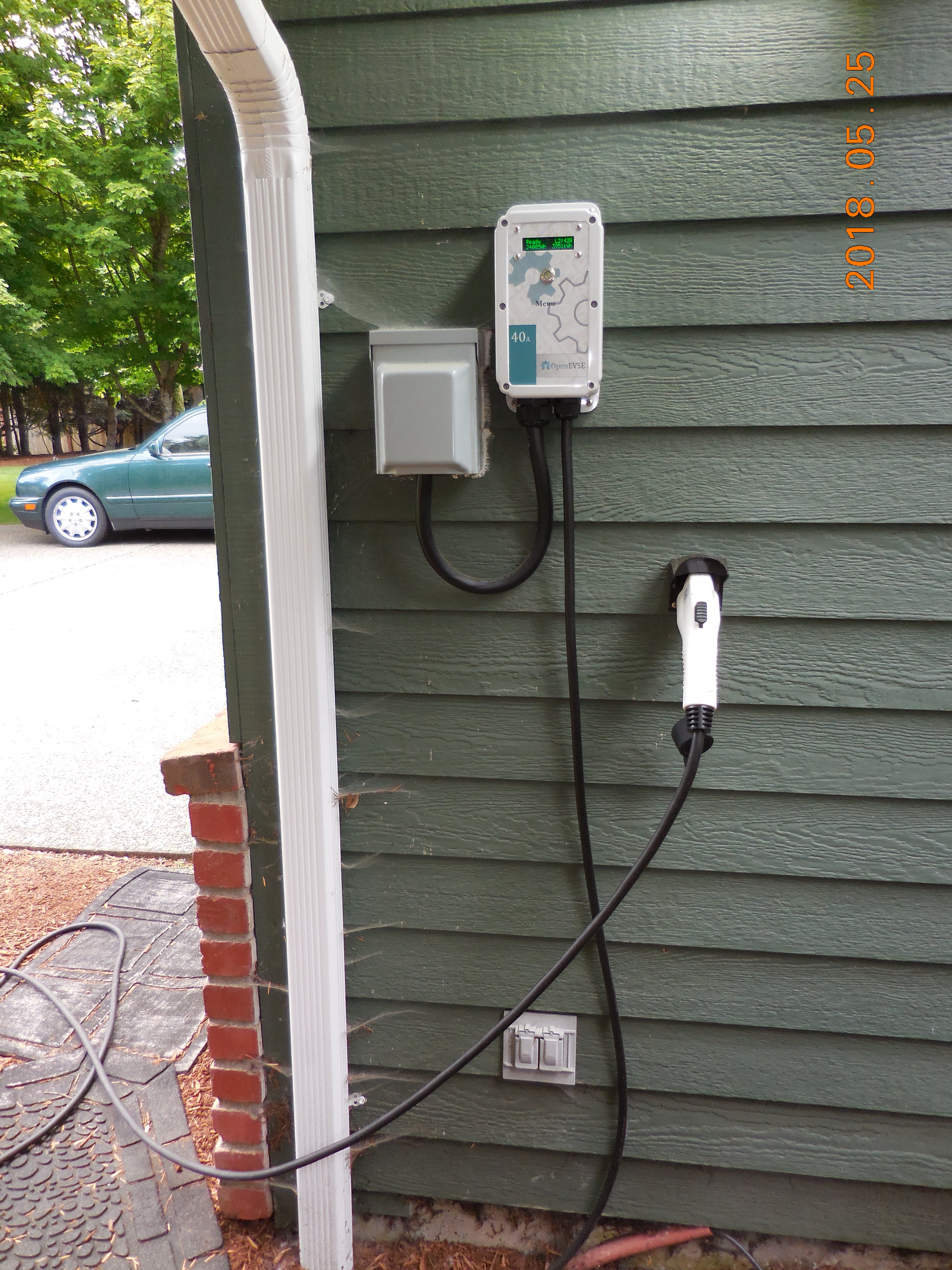 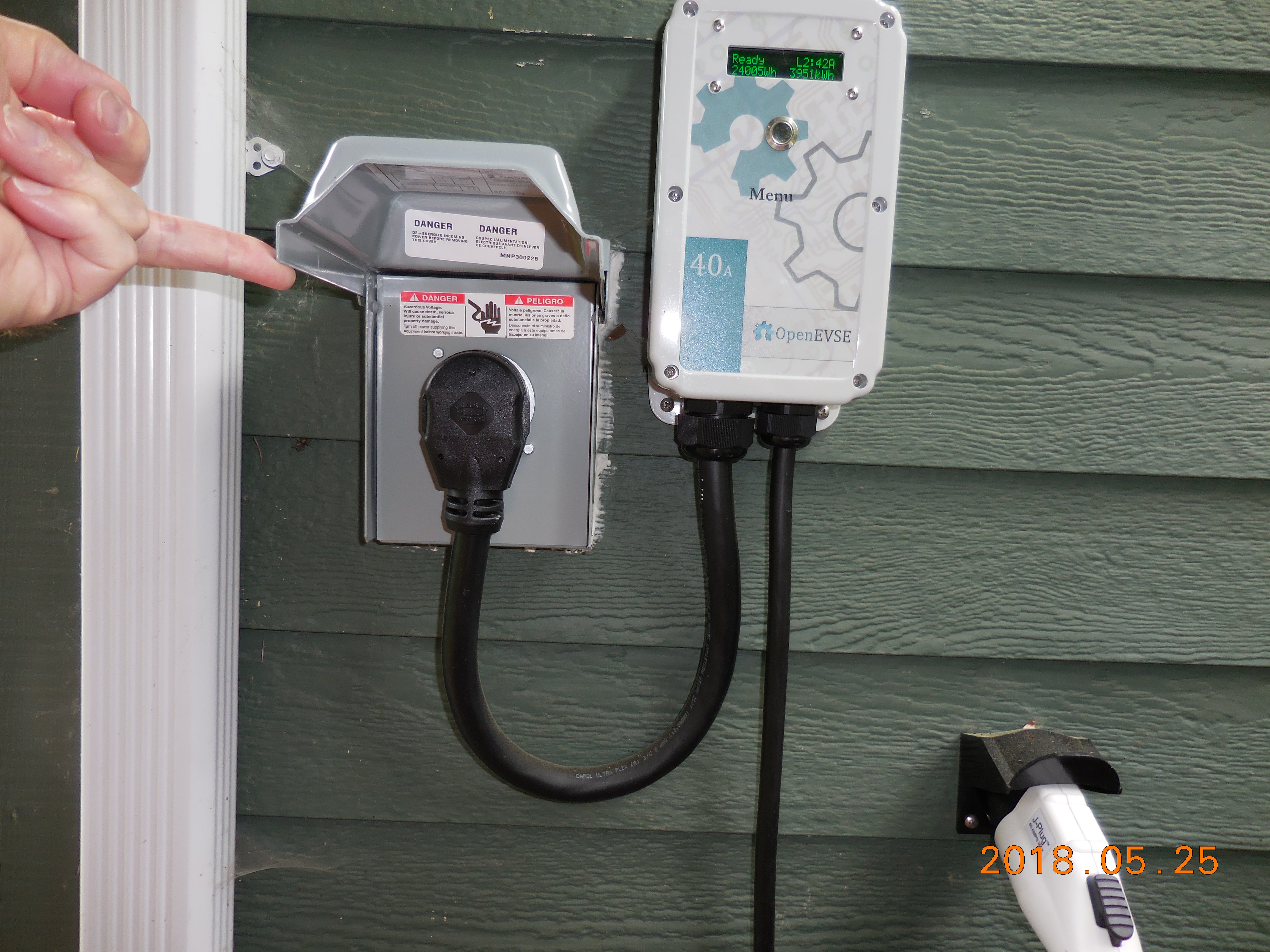 It has the WiFi option board, but until this week, I'd never explored it.

I want to use features of this OpenEVSE to tailor the charge start time every night. My goal is to have the battery charged just before I'm ready to depart. The car's onboard scheduler is too conservative, often completing a charge three hours before I leave, and if I try to fool it by changing the departure time, the pre-climate feature has to be disabled.

The OpenEVSE can circumvent the vehicle's scheduled charge feature. I can put the car in "charge now" mode, and schedule the EVSE when to turn on, to more precisely control charge start time than the car's scheduler allows.

The WiFi CPU's firmware is (usually) upgradeable via a web interface: typical. I ran through the procedure, but finally could not get it to tell me the version of the uploaded firmware, and it wouldn't work correctly after that.

The EVSE's main module's firmware cannot be upgraded via a web interface; wires are needed.

I got to the point where I had to remove both CPUs from the OpenEVSE's enclosure, connect them to a PC, and re-flash them. Argh, the learning curve. Below summarizes the successful path I took; not necessarily an optimized path, but I'm leaving out most of the cruft of wrong turns I took along the way. This is a recipe, probably not the best recipe.

The WiFi module firmware
The WiFi's ESP8266 has to be flashed using the serial interface. On modern PCs, this requires a USB<->serial (not RS232, which is 5-25v) 3.3v signal level converter, and the better ones use an FTDI IC to facilitate the conversion. I ordered two of those, one an AdaFruit via Amazon, and another no-name via eBay (FT232RL FTDI USB 3.3V 5.5V to TTL Serial Adapter Module for Arduino Mini Ports). The AdaFruit unit looks great, but I've never been able to make it work. The no-name worked OK.

I had to install esptool, a Python program (instructions from github). My Ubuntu 18.04 has Python 2.7 installed, but not pypi. I think I installed esptool using:

There are a couple of different ways to allow access to the USB<->serial converter, but for a one-time thing, chmod worked.

In order for the ESP8266 to use its serial interface to input flash data, you have to put the chip in flash mode, by grounding the GPIO0 line on powerup. The Adafruit WiFi module conveniently has a tactile switch to do this.

Assuming you have the flash data file in Downloads . . .
In a terminal window, preload these two lines into the terminal buffer: On the WiFi module:

The OpenEVSE's main module uses the Atmel MEGA328P, which is an AVR microcontroller, and uses In System Programming (ISP) (or In-circuit Serial Programming: ICSP) to update its code, using the board's Serial Peripheral Interface (SPI). I purchased an AVR programming tool from the OpenEVSE online store, but though they accepted my order on Wednesday, I received no tracking info until I emailed them Friday asking for it, and then they returned a USPS tracking number that shows they haven't actually shipped it yet (Sunday night). Sigh. After calling around a bit to try to find an alternate AVR programming tool locally, I fell back to Amazon: ordered Fri. night, dropped at my locker Sunday morning. I purchased a Waveshare Atmel AVR programmer for $42. It worked perfectly, and after checking the pinouts of it and the OpenEVSE's main module's SPI header pinout, they matched, so I didn't even have to get out the jumpers.

The AVR warns that it won't power the unit to be programmed, so I used power from one of FTDIs to run the main module.

I had to install avrdude.

I installed libusb-dev, but I'm not sure I needed it.

OpenEVSE has a guide to performing the firmware upgrade to the main module, but it's Windows-centric. The firmware releases are here. The pre-compiled firmware has a .bat file with clues on how to proceed, though.

These lines are the meat of it. I only had to substitute "avrisp2" where the orginals contained "USBasp". The Waveshare ISP programmer is a clone of an Atmel AVR ISP mkII, which uses the parameters in avrdude.conf associated with avrisp2.
A note about the first line: There is a complaint about efuse:

Based on this discussion I ignored this error:

oPossum wrote:Bits 3 to 7 of efuse will always read 0 - they are not used.

Bits 0-2 are to enable/disable Brown Out Detection (BOD), and if enabled, to set the voltage below which the AT328P will not run. The OpenEVSE code sets it to only run when the supply voltage is above 4.3v .

The default for this chip is/was 0xFF (B1111 1111) (opinions vary), or different programming tools/versions read-back an unset bit (which on this device: unset = 1) as either 0 or 1, so depending on the tool and version and age of the chip, one might get 0x04 or 0xFC.

It's even possible that the WinAVR version of avrdude, and the Linux version read-back unset bits differently. I'm not chasing it down further, I'm happy with it working.
Regards,
Al S.