This car had a battery leak (fell into fan/PS pump) and was left that way. The corrosion I see is consistent with acid. I don't think merely soaking in water would cause this. The wire was corroded several inches up into the insulation on all three wires. There are at least two of these three-way junctions in that area; only the one was really bad, the other one is still in decent condition. There are several more in the section of harness leading up to the relays panel, and those are all in good condition.

Once you know where to look, it's not all that difficult to repair. Unbolting the relay panel & fuel filter and bailing-wiring them out of the way is helpful, and a sharp utility knife is very handy for removing the harness wrap.

The section under the fuel filter has a heavier sheath, and I merely split the top of it to access the junction. I used multiple nylon zip ties to re-wrap that sheathing later, because commercial loom material is difficult to work with in that area.

After soldering the new junction (I added about one foot of white 12ga wire to make this easier), I coated the junctions with silicone gasket sealer, then shrink wrapped it, so moisture will be unable to get at them again.

If we get a third person with this problem, I'll add it to the FAQ (along with wagon rear brake adjusters and the dimmer switch fix).
Regards,
Al S.

Al
When you get under the car see if you can determine whether the cross-member for the trans is mounted at different points. I know that it's not the same as the 81-2 but I'm wondering if the cross-member itself was modified for the new trans or whether the mounting points were modified or both.

glenlloyd wrote:When you get under the car see if you can determine whether the cross-member for the trans is mounted at different points. I know that it's not the same as the 81-2 but I'm wondering if the cross-member itself was modified for the new trans or whether the mounting points were modified or both.

My recollection from about a year ago: both. I'll try to get it to a pit this week and take a good picture.
Regards,
Al S.

Won an eBay auction for a rebuilt steering rack:

$51 shipped, but who knows what the quality is?

I'm still jazzed about the $109 OEM-style radiator that Salvy got! Tempts me to go buy one for myself . . . and I don't even need one!
Regards,
Al S.

Al, it actually was $106 and it truly is factory. The employee on the phone first gave my dad the price of $140, but he thought he could get it for cheaper and my dad kept jewing the guy down until it stopped at the price of $106. Basically when you call this business you'll get a different person on the phone each time and for the most part they are called "sales people." Given that, they try to sell and convince you to buy, so negotiating with them is fine if you can get it a little cheaper than the first stated price. Because then in the end they sold a unit. Hooray! I'll make sure I snap at least one picture of it before I install it back into my car. I don't know the name of the radiator company, but do have their phone number. I have to ask my dad what the company's name is. Let me know if you or anyone else is interested in buying one. I'd like to help out for sure.
Top 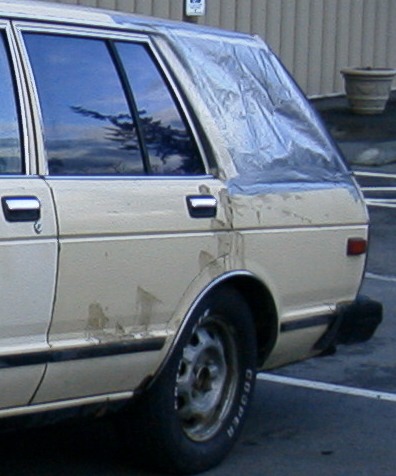 Whatever that goo was on the driver's side rear door and rear quarter panel, it was amazingly difficult to remove. Took about two hours to get it all off. Did that two weeks ago.

I've got the new side glass in, replacing that nice piece of visqueen that Myrna found for me prior to hauling it across the Cascades. 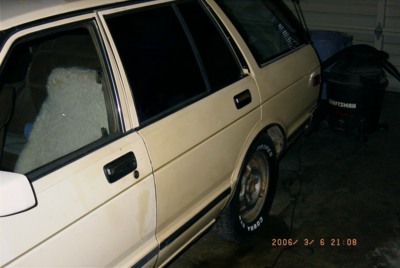 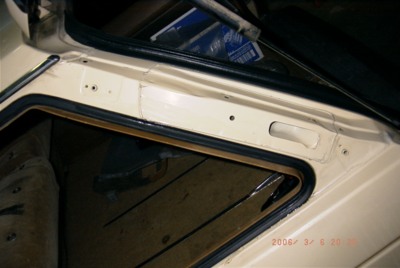 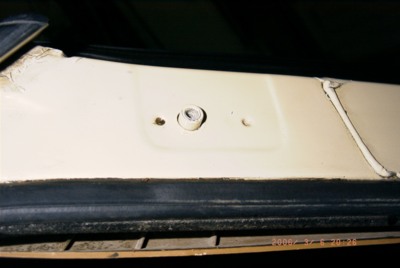 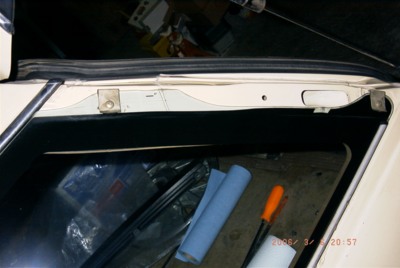 The new glass isn't tinted like the old glass, so it looks just a bit odd.


Last night I tackled the "grease" stains on the rear seatback. 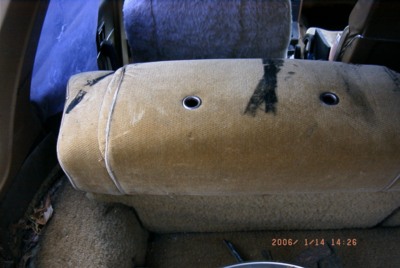 At least, I thought it was grease. Normal grease treatments wouldn't touch it. I started with Spray-N-Wash, which normally works quite well (spray on, scrub with nylon brush, ShopVac off, then add water and vacuum again and again). Nothing. Moved to straight Lye: nothing. Finally used brake cleaner, which immediately melted it into the upholstery, but following that with the vacuum (and having pre-wetted it with the other stuff), it mostly came out. It must have been some kind of mastic or adhesive. Very difficult to remove. Some was on one of the headrests, but it came out of that completely, no sign of it ever having been stained. The headrest covers come off of the foam stuffing with only a little effort.

Next up is the valve cover gasket, which is leaking quite badly. I had cleaned the engine off lightly, and I've only run it eight miles plus about an hour of idling, and oil is already down to the oil pan rail on the driver's side, all over the injectors on the pass. side. Bad leak. Something for next weekend.
Regards,
Al S.

Al,
Looks much better without the goo and duct tape. Too bad about the tinting though, didn't think they probably had untinted glass except that JY car was a 1981 wasn't it? The LD28 in 1981 wasn't necessarily with the Maxima package was it?

Did the donor car have AC?

My '83 Wagon has aftermarket tinting that's much darker than the stock stuff. Rear windows only, plus tailgate window.

Last night, I manually pulled up the antenna (does anybody's Wagon power antenna still work?), and the radio sounds very good, better than my '82 Wagon's. I notice that the '83 has four speaker grilles in the rear (a largish one and a smaller one right behind it), but my '82 Wagon has only the two large grilles. The Parts Catalog says that the smaller grilles are for '82 for some submodel, but I can't figure it out. Steve, Section 280-7, Ref 50-05, does it make sense to you?

I de-greased the fusebox cover and the area under the glovebox. Someone major smeared grease all over the plastic, but it all came right off.

I vac'd the whole car out again (still finding bits of broken glass everywhere) and the carpets are in very good condition, needing only shampooing, which I'll probably do sometime. I'll screw the steering column plastic back on, reinstall the knee bolster, and that'll pretty much finish the interiour work.
Regards,
Al S.

asavage wrote:My '83 Wagon has aftermarket tinting that's much darker than the stock stuff. Rear windows only, plus tailgate window.

yes, mine works, goes up and down all the way. I had to tinker with it but eventually got it work the full range.


asavage wrote:...but my '82 Wagon has only the two large grilles.


asavage wrote:The Parts Catalog says that the smaller grilles are for '82 for some submodel, but I can't figure it out. Steve, Section 280-7, Ref 50-05, does it make sense to you?

Unfortunately my 910 catalog (or what there is of it) doesn't have a page 280-7. Not because it's missing, but because it didn't exist in this version. I think I've seen the larger dual speaker grills you mention, on a 1985 U11 wagon, but mounted in the headliner at the rear. Can you scan the page and post it?


asavage wrote:I vac'd the whole car out again (still finding bits of broken glass everywhere) and the carpets are in very good condition, needing only shampooing, which I'll probably do sometime. I'll screw the steering column plastic back on, reinstall the knee bolster, and that'll pretty much finish the interiour work.

Believe me, you'll find glass forever. I've lost countless windows over the years to pranksters and thieves, and no matter how well you vacuum you still find bits and pieces later on. Glad to hear your carpets are good though!

I really can't do a decent job of scanning this thing. I'm afraid of damaging the binding, the paper is bible paper thin and requires a backer sheet . . . it just isn't something to be done gracefully. 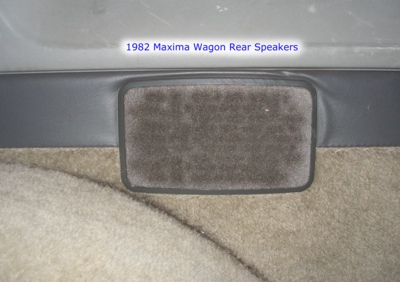 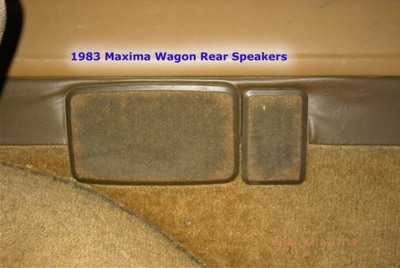 My 1982 only has the speaker grill on the left, not the one on the right. I'd like to know how they've got the speaker setup bolted in behind the grills.

The ones on the 85 are much bigger, for large round 6" with smaller round for what I assume is a tweeter perhaps. On the wagons they're mounted in the roof just forward of the tailgate.

Dash still apart, using harness as test rig for Ben's clock -- got his clock hooked up, a key in the "Accy" position, car locked (a spare key in my pocket). I'll let it run a couple of days and see if it becomes intermittant again.

Right door speaker is silent, left door speaker came on when I banged on it -- door rattles, so I'll be pulling it apart to do the crack fix, and I'll deal with the speaker connection at that time.

Aligned the driver's door strike, it now closes much better, but still requires too much force to open. I may have to remove, clean, and lube the latch assy.
Regards,
Al S.