I acquired a 1982 Datsun 720 pickup, and there was too much slop in the idler arm. I wanted to replace it with a relatively robust unit.

I ordered a Moog idler ($92), but when I opened the box, I found that although the mounting bracket is a nice, cast steel piece, the pivot itself doesn't appear to have much bearing surface to resist the typical wear that most idler arms exhibit (that is, the arm should not deflect up and down).

Then I ordered a NAPA idler ($96), and when I unboxed it, it appears nearly identical to the one worn one I have, except that the NAPA unit has no grease zerk. So, I kept the NAPA unit and returned the Moog. Then I took the NAPA unit apart and cross-drilled it for a grease zerk, and installed it on the PU. Seems to work nice. 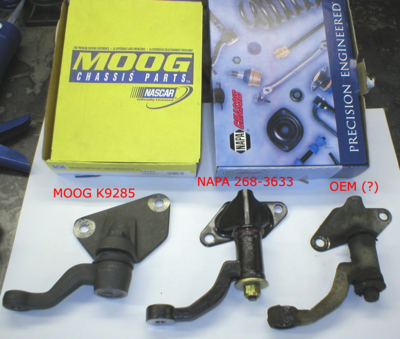 While I had it apart, I noticed that the bushings are of a type of plastic. I took the OEM (or, what I assume to be OEM) unit apart and it uses the same style of plastic bushings, though of a different color, and they were, of course, very worn and cracked.

Later, I went back to the catalogs, and Lo! The plastic bushings appear to be available separately! NAPA part Nos. for 1982 models are

Both are about $8 each, so $16 for a pair. A lot cheaper than buying the whole idler arm, when the plastic bushings appear to be what take the brunt of the wear.

I guess that I should also mention what is sure to come up: why not just fire up the lathe and machine a couple of metal flanged bushings? Bronze would be easy, and as long as the housing is greaseable, they'd probably outlast the plastic.

Sure, I could do that, but one of the nice things that having bushings with some deflection ("give") provide is to allow severe shocks to not be entirely transmitted to the steering gear. Sometimes, it's nice to not beat up the rest of the steering bits.
Regards,
Al S.

Al: I checked with the orginal owner and he does not recall ever replacing the idler arm on my truck. So ... I'm going to say this is the orginal part pictured below. I will tell you there is a small shimmy in the steering on hard bumps ... small shimmy if the front tires are aired to no more than 30lbs. Bump them up to max tire inflation of 35lbs and the bump shimmy can get fierce. With the suspension unloaded and leverage applied against the idler arm, I get no movement. But I have not loosened the pivot nut and tested it again. No doubt though, the bushings must be worn in spite of the grease fitting. 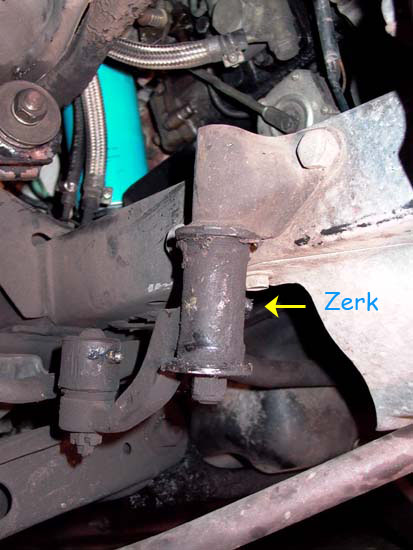 Mine was quite loose without having to loosen the large nut. I could grab the center link and move it up and down -- this with the front end off the ground though.

[Remember, everyone, that I have a brand new center link I'm trying to sell, $50.]
Regards,
Al S.

I found another source for the idler arm bushings. Early trucks get the super-cheap bushings ($2.89), the price for the later trucks is similar to the NAPA price.

I got mine at NAPA a few weeks ago. What a difference! For about 15 miles... Slowly the slop returned, and now things are almost the same as before I replaced the bushings. I measured about two inches of slack at the rim of the steering wheel before, and about one inch after replacement. Now I've got about 1.75 inches of slop. Oh well.
Byron

Have you verified your repair work ... is there lateral movement at the pivot pin (again)? Was there any notable wear in the pivot pin where the plastic bushings ride?

How about the drag link pivots? All tight and slop free?

You might need an assistant to rotate the steering wheel back and forth while you inspect the steering links.
-Philip
Passed 08May2008
My friend, you are missed . . .
1982 Datsun 720KC SD-22

Hey, which one of the above idler arm bushings from NAPA is going to fit a truck with mfg. date 7/81?

claybodie wrote:Hey, which one of the above idler arm bushings from NAPA is going to fit a truck with mfg. date 7/81?

So I've been back and forth about this - the mechanic who sold me the truck swears that a 7/81 mfg date makes it an '82.

btw, I don't need the rebuild kit. I have two idler arms and just need the bushing - so it seems that BA 1013851 (plastic bushing only) would work if that's the right year.

Has anyone had success by just replacing the bushing? I've switched out the bushing once, and swapped out the whole idler arm once - it seems like it helps initially but the slop always returns...
1982 Datsun 720 w/ sd22 running on B100.
Top

claybodie wrote: I've switched out the bushing once, and swapped out the whole idler arm once - it seems like it helps initially but the slop always returns...

You DO pack with grease, right?

So, I've replaced the bushings with every pair out there and it hasn't helped, so I'm going to replace the whole assembly with NAPA #268-3633 which I see listed for a reasonable $65 on their website.

claybodie wrote:1) Is it easy to install a zerk and how do I do that?

See the pic of it at the top of this thread (middle unit). Remove the nut from the end of the shaft. Remove the shaft (keep the washer!). If the bushings stay in the arm, that's OK. Drill an appropriate hole in approximately the same location as the hole in your old arm; this is centered vertically, more or less, ie not where the bushings are. It does not matter where "around" the tubular section you drill, as long as you can get a grease gun coupler on it when installed. Usually, 90° either side of where the arm sticks out from the tube is good.

Tap the hole for an appropriate fitting. I like the 1/8" NPT zerks myself, but you might find that there is not really enough material in that tube to support that large a hole gracefully, so use the smaller thread zerk instead. I forget its thread size/pitch. Both zerks are the same at the nipple end. Though it looks like a good idea, I'd avoid the 90° zerk style in this application.

Now clean out ALL the tap and drill chips. If the bushings are still in the tube, you'll have to be especially careful to make sure you get them all out, that they aren't hiding inside behind the ledge of the bushngs.

Screw in grease zerk. Coat the shaft lightly with lube (any lube), slide it home, reinstall washer and nut, do not overtighten. Install on truck, apply grease until grease comes out both ends (may require more than you think it should). Clean up excess grease. That's it.

claybodie wrote:snip- Has anyone had success by just replacing the bushing? I've switched out the bushing once, and swapped out the whole idler arm once - it seems like it helps initially but the slop always returns...