CD-powered vehicles, specifically the Sentra, but also retrofits and swaps.

you need to know what the engine came out of.

CD20 most of the timing belts are the same-as long as there from a similar year-different part numbers are often just different brands.

the FWD van engine may be different to some FWD versions.

I have both the fwd premera version and the AWD van set up. The only thing that looks the same on them is the block head and fuel pump.. The fuel pump is in a differant location.. I am sure the belts are readily available in AU. Also I am looking for what looks like a type of PCV valve. All of them on the engines I get have damage from shipping..
1994 Infiniti J30 TwinTurbo 5-spd + mods
1994 Infiniti G20 Diesel CD20T Auto
1998 Nissan Frontier CD20T 5 spd (soon)
1986 Toyota 4X4 Truck Diesel 1L (sold)
45ftx22ft Passenger Hovercraft Diesel Powered (hope to complete in 2008) Destin for Honduras
Top

i purchased mine from england.my sister bought it and put in a company post pack.have no idea of cost.fwd ad van.UK parts purchased using the numbers off the belt.
13028-57JO1 CD20 CAMSHAFT
16806-54A10 INJECT PUMP BELT

PCV-mine only has a hose coming out the top to the air intake with the oil seporator inside the rocker cover.

mine has a plastic dish about 2.75 inches around on top with a hose out of that.. it has a one way valve inside(large rubber flap)

here is a picture of one exactly like mine.. but in the picture this one does not have the hose on. it is missing

That's not a PCV, it's a CDR. A Crankcase Depression Regulator is designed to prevent significant vacuum on the crankcase, for example if the air intake becomes plugged (due to dirty air filter or snow plugging the intake). You could swap in a CDR from many different diesel engines; they all work pretty much the same.
Top

Perhaps the one fitted to the SD25 could be adapted with little effort? It looks to me like the CD CDR mounts to the valve cover and fumes can exit the engine directly from there. That is the way the SD25's CDR mounts as well.

IIRC (and I do not really have a good picture in mind), the GM 6.2l does not plumb directly to the engine, but has a hose between it and the engine. But I can't really recall well. Perhaps Matt will chime in, since he owns one now.

The Maxima/LD28 has one, but it is designed to work in conjunction with the EGR system that utilizes an intake throttle under computer control, so it would not be a good fit for your non-throttled CD.

As I said, a lot of CDRs could be adapted.

Having said that, I think I'd try to run without. A decent baffle to discourage oil droplets from traversing the hose, and just run a hose from where your CD's CDR bolts to the air-filter-to-turbo inlet tract. Unless you have an unduly restrictive air filter, it should work fine. But a CDR would give you some protection in the event that you really rev the snot out of it and find that you have more inlet restriction than you thought.

Hmmm. I used to run on of those filter-minder things that measures intake restriction and sets a red flag when the filter gets restrictive. Filter Minder. 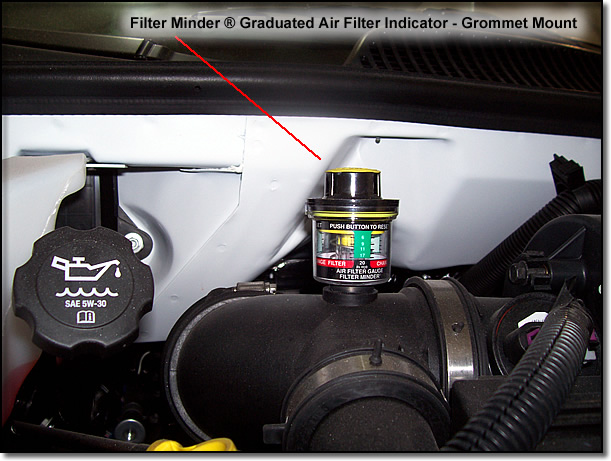 Re-thinking this, I suppose it may be a good idea to have a CDR inline after all.
Last edited by asavage 12 years ago, edited 1 time in total.
Regards,
Al S.

VW T4/T5 has a filter service indicator in the dash center,vac/mechanical.
set up and its a standatrd size dial.

nissan patrol/landcruiser has a simple cheep light switch with vac hoses each side on the filter.it bolted the air cleaner,common to see cars with this removed and the plugs cut off-i suspect there gone to other cars.
WCJR31 Skyline.3.0 manual.wagon
R31 SKYLINE/Passage GT/PINTARA
LPG Ford Falcon 99-06 93 Disco
Local Shire Southern Zone Mechanic.
Top

What RWD transmission options are available for the CD engines?
Top

Well I think auto and 5-spd, 2wd and full time 4wd. When I ordered the last batch, I ask for rwd, turbo, stick( I needed the flywheel). He sent me that but it was a 4wd.. I also ordered frontwd complete swaps(auto). I did not mind, I am not using the tranny anyways.<P>

I believe the flywheel is the exact same as the SR20 G20 flywheel..
<P>
Also It looks like the frontier tranny will bolt up to the CD20, except the heavier diesel starter bolts up differantly.. I am just going to make a plate to mount the CD20 starter th the Frontier tranny.. If this all works easy, then you should be able to use almost any tranny on one...
1994 Infiniti J30 TwinTurbo 5-spd + mods
1994 Infiniti G20 Diesel CD20T Auto
1998 Nissan Frontier CD20T 5 spd (soon)
1986 Toyota 4X4 Truck Diesel 1L (sold)
45ftx22ft Passenger Hovercraft Diesel Powered (hope to complete in 2008) Destin for Honduras
Top

I purchased FWD CD20 for RWD use.
the CD block is the same as the CA block.

the clutch is a later type setup with the plate in backwards and a thin thrust bearing.the starter moter wont bolt directly to the CA20E gear box.the lower bolt in is a different possition.i dilled the hole and used a hellicoil.i cant use the rwd type starter as it faces the rear on top-i like to keep the heater.

i used the skyline engine mounts,there hydrolic filled type.the RH side needed to be trimed[lots] to clear the starter.
i thought of using a angle bar,bolted to the original bolts,an angle bar running forward weilded and a short angle running up to the alternater[power steer] lower piviot bolt.the engineer liked my original mount as he can list it as unmodifed.

i had removed the oil heat exchanger fitted an oil relief valve into the block and used a remote filter.modified the thermostat outlet and changed water hoses.this was all to run an alternator on the right hand side,no power steer on the car in question.would have been easy to put an idler but i needed to move the alternator to use the bigger skyline compressor.

RWD water pump-CA20-on the first trip the visco hub locked in at 60 mph and pulled the bearing out of the water pump.FWD pumps are light duty and you cant run a mechancal pump.

made extractors to fit.had planed to make intake or turn around the original.is was easy to use 2X 90 deg elbow and a 2 inch bent exhaust tube and muffler bolted to the engine mount to reach the skyline air intake.with the air flow meter removed.

i used the CA20 AC compressor as the FWD was under the sump area too low to use.i was unable to get a rwd engine and ive seen a few different types.
WCJR31 Skyline.3.0 manual.wagon
R31 SKYLINE/Passage GT/PINTARA
LPG Ford Falcon 99-06 93 Disco
Local Shire Southern Zone Mechanic.
Top
Post Reply
15 posts • Page 1 of 1