I believe that Al has covered this in a post someplace you may try the "search" feature.
If i recall correctly he has drawings and output voltages/amps etc
Retired Pauly
Problem with being retired is that you never get a day off.
1987 D21-J SD25 KC
KJLGD21FN
Top 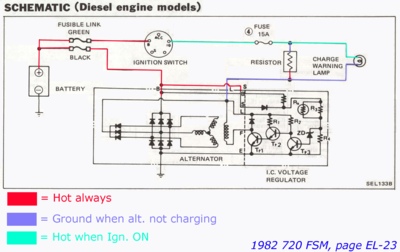 The page in the Factory Service Manual that that's from is here.

To summarize: on the LR150 as used with the SD2x in 720 pickups, the B and S wires are both unswitched 12v+, and the L terminal is the idiot light circuit, which is absolutely necessary to kick-start the alternator.

None of those three wires is earthed. I know nothing of your LT140, but Hitachi tends to use the same design over and over across many of their alternators.

The 5mm stud on the back of the alternator is the one that charges the battery, not those three wires.

The primary cause of failure of this series of Hitachi alternators is physically failed diodes. It's extremely common. The oil leakage from the vacuum pump into the alternator is often due to a groove worn in the rotor's shaft. The fix is a dual-lip seal that seals on the shaft in two places. The part number for that seal is in the thread referenced above.

Thankyou both very much.
With that info I can get somewhere, literally.
Top
Post Reply
4 posts •Page 1 of 1