Following Carimbo's Sedan's starter failure, I found that only two of the four LD28 starters I own actually work. The other two have bad solenoids and do not pass current to the starter motor, though both "clunk" and move the bendix.

One starter is from an '81 in a JY last year, and is labled as a factory reman: 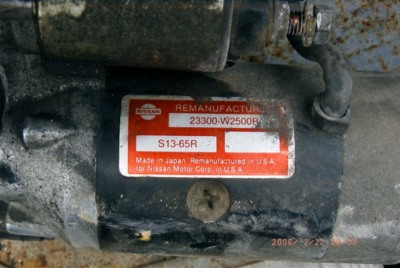 The other is one that came with an engine I bought bare a couple years back: 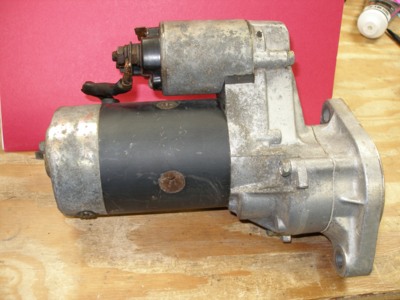 Bridging the solenoids large terminals confirmed that both starter motors run, but neither solenoid would actually pass current, or enough current.

It took three tries (and I sent a lot of parts back!), but I was able to source a replacement solenoid for about $30 ea. I bought three

It's a product of Brazil and is labelled as "REXCO", No. SSHI-804. This was sourced by my local rebuilder from (I think) Romaine Electric in Seattle.

I need to stress that when it comes to Hitachi, there are dozens (and I am not exaggerating) of similar-looking solenoids. This number fits and seems to work. 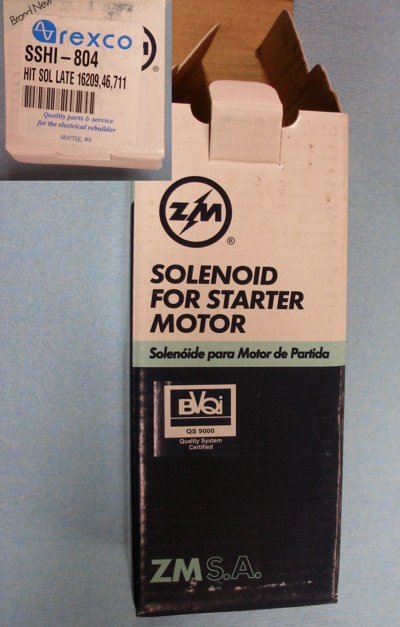 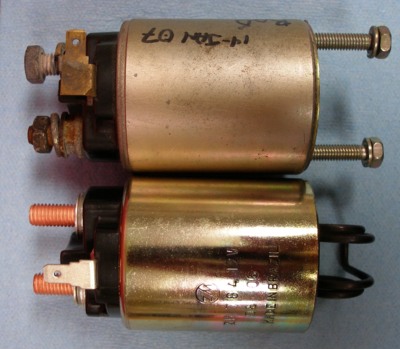 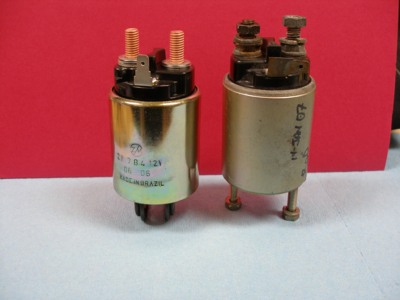 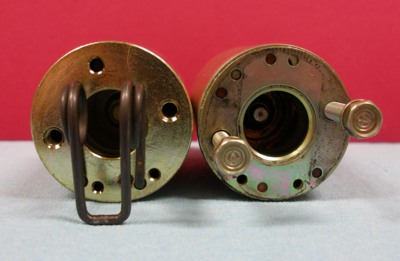 In particular, note that the solenoid's bolt pattern is at an angle to the spring holes. 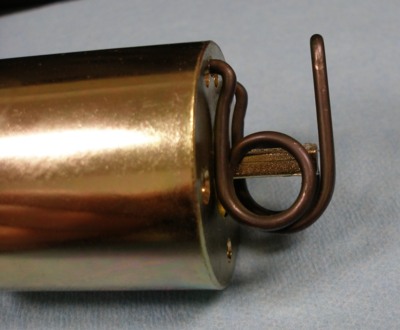 The SSHI-804 has the correct angularity of those mounting holes. The wiring end cap's alignment is off by a few degrees, but this is cosmetic only. Also, the spade terminal is not right-angle. This should not present a problem, but I have not installed either of these so I don't know for certain. 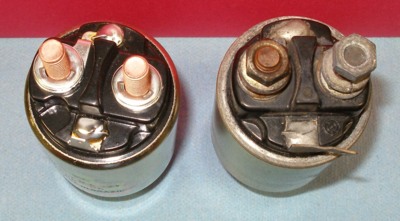 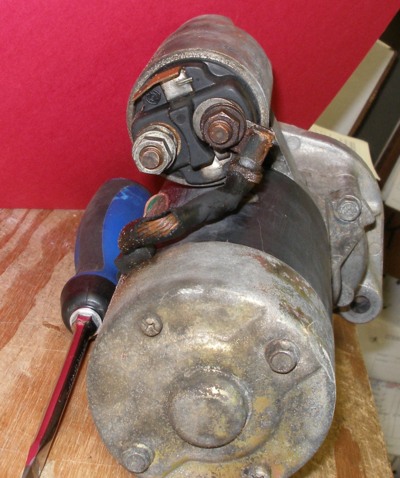 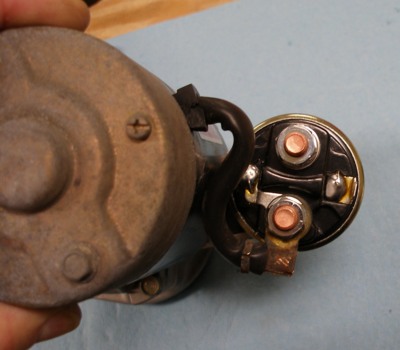 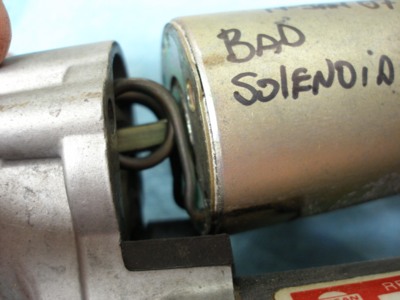 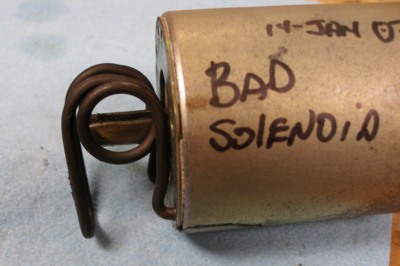 The spring pulls out of the solenoid with a bit of a tug. When putting the spring onto the new solenoid, note the bolt holes-to-spring holes orientation. 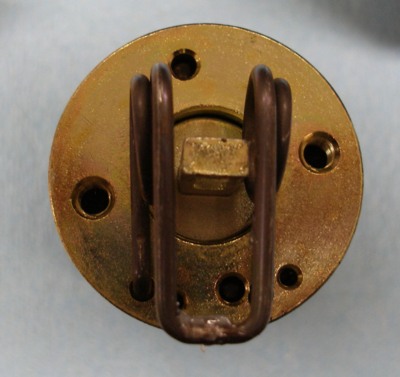 Use needle-nose pliers on the bendix gear, pull it out against spring pressure, and wedge it with a suitable tool. This gives you room to remove the bendix lever. If you don't do this first, later the lever can become jammed inconveniently around the rear of the pinion shaft. Ask me how I know. 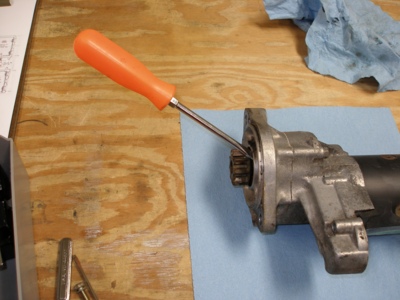 Remove the rubber plug ("dust shield"). It takes a good tug to pull it out, at least it did in my case. 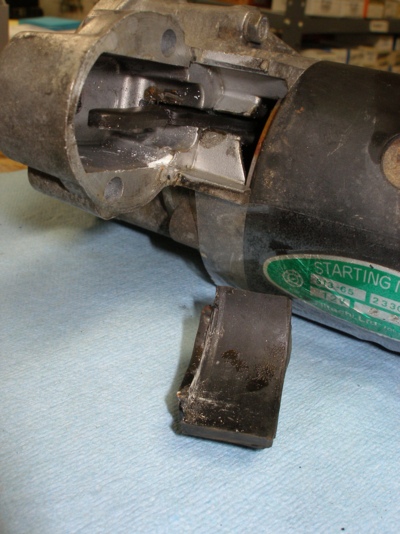 Using needle-nose pliers, pull up on the lever and remove it.

The FSM shows this: 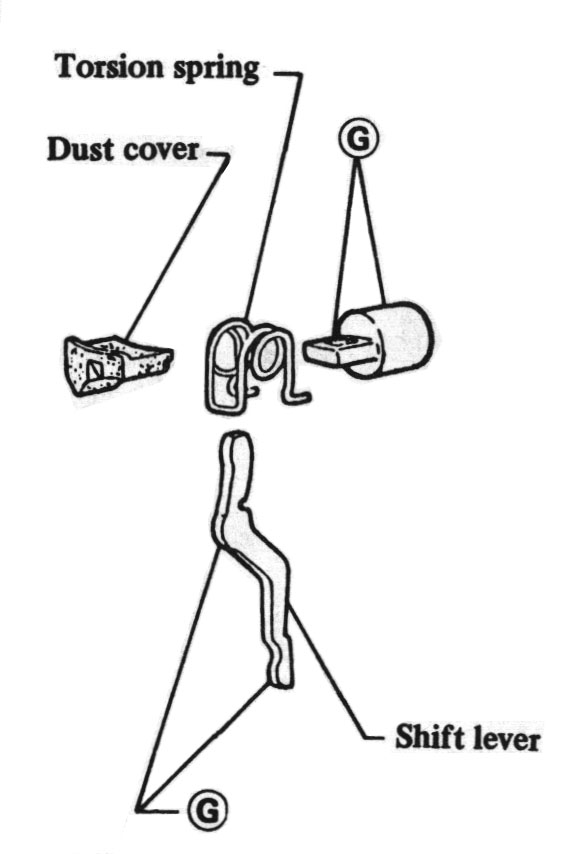 But, it's closer to this. I would not use a grease on the solenoid's plunger, it's too easy to get a sticking plunger. Unless you use a light synthetic grease. 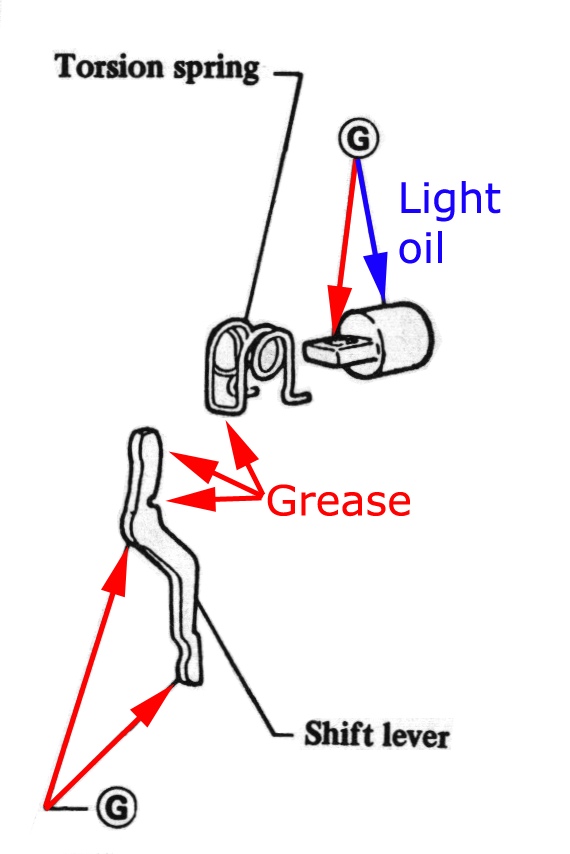 Grease up the pivot lever, then slide it back down into the normal position. Remember, the end is just pushing on the end of a shaft, there's pretty much no alignment you need to do. All the alignment is done by the solenoid plunger when you assemble it -- see the next step.

When assembling the solenoid to the housing, bear in mind that the spring's lower horizontal bit goes into the pivot lever's divot -- just like it came off, in case you didn't see. This takes a bit of planning to accomplish, but it can be done. 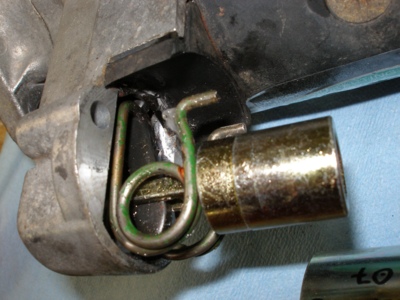 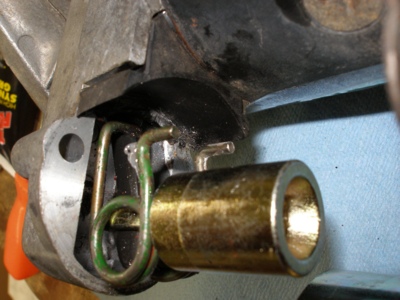 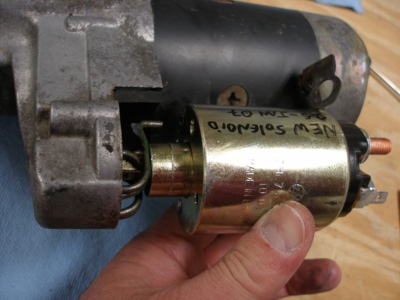 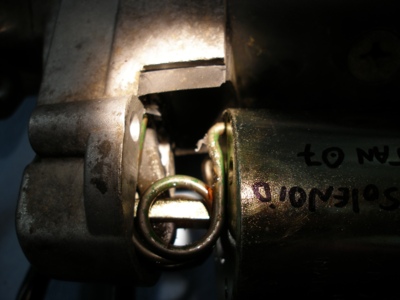 The new solenoid comes with a nut for the starter motor wire, which is 13mm across the flats, rather than 12mm.

Autopsy of a bad solenoid

First, I desoldered the coil's terminals (a solder-sucker is very helpful here). 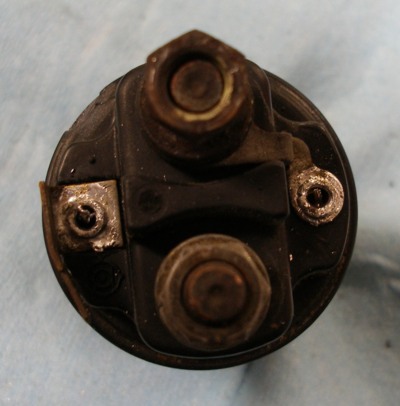 Then I bandsawed off 1/4" of the steel housing, where it's crimped over the bakelite-like connections end. This let the guts come out of the solenoid housing with little effort. 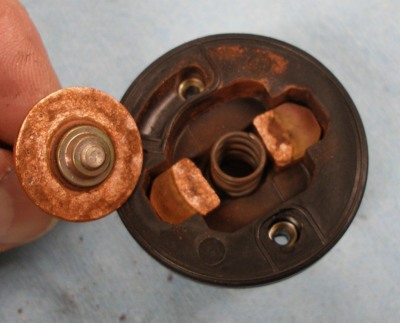 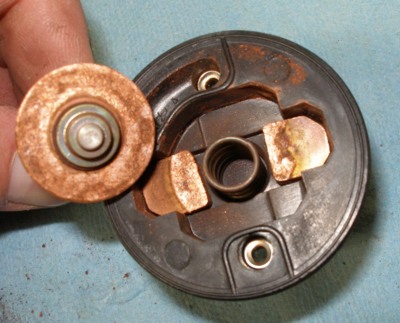 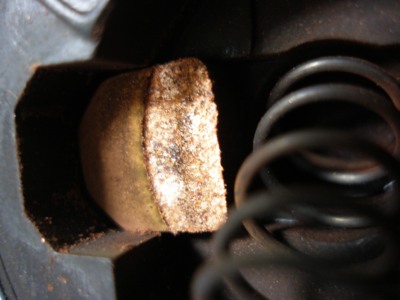 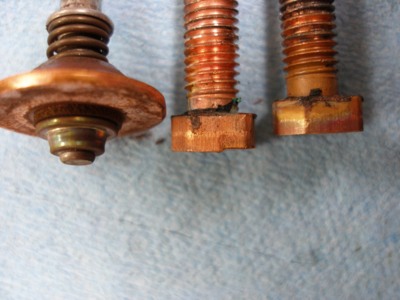 There is quite a bit of wear showing on that left contact, quite a "step".
Last edited by asavage 14 years ago, edited 4 times in total.
Regards,
Al S.

Al
Was the Standard Motor Products model SS340 one of the ones that you found to be unsatisfactory?

The first two batches of three were all Rexco products, so no.

Running that number through RockAuto, I get a picture:

And the RockAuto pic does not have a view of the mounting end. Although RockAuto does mention the correct Nissan starter number: 23300-W2500.

Here's the Airtex 1M1209 solenoid that RockAuto calls out,

It's worth repeating: I was unable (in two tries) to obtain the correct solenoid based on the Nissan starter number of 23300-W2500.
Regards,
Al S.


asavage wrote: The SSHI-804 has the correct angularity of those mounting holes. The wiring end cap's alignment is off by a few degrees, but this is cosmetic only. Also, the spade terminal is not right-angle. This should not present a problem, but I have not installed either of these so I don't know for certain.

Not a problem. The reman starter I just installed had the straight terminal, which I liked a little better because it seemed a little more isolated from the always energized pos. starter terminal.

Wished I had cannibalized the shim from the core I just returned ($35), in case you needed it, Al. Controls the pinion engagement distance. (FSM, EL-20)
Top

I usually only have to replace the contacts that the disc works against.

On toyotas the contacts will erode about 1/8 of an inch before they stop passing current.
Top

Unlike Delco and Ford solenoids, the Hitachi I had to bandsaw off the last 1/8" of its housing, where it was crimped over. How do you get into the solenoid to replace the contacts, and put it back together?
Top

asavage wrote:Unlike Delco and Ford solenoids, the Hitachi I had to bandsaw off the last 1/8" of its housing, where it was crimped over. How do you get into the solenoid to replace the contacts, and put it back together?

On my toyota 3vze V6 starter it just dismantles easily to get at the contacts.

Well, you can see in the pics above that that isn't the way the LD28 ones are done. It doesn't unbolt or unscrew.
Top

Hey guys, how's everyone doing? Well lets cut to the chase, I burned through the thick solenoid ground wire trying to start the car in cold weather. I crimped a new connection on and reconnected it then took it and had it tested (tested good). Meanwhile I pulled the a known good starter,and fitted it into the car that I originally fried the solenoid in. Now I'm trying to get the fixed/fried starter back into the car I took the known good from but I can't get it to work. Is there any reason why it would work in their machine but not in my car? Am I wrong in thinking that all I need to make the starter work is power from the battery, good ground with solenoid jumper wire, good ground on clip- on wire and ground at starter body? Also I tried to bridge the positive bolt with the negative bolt with a screwdriver and nothing, is this correct behavior? Thanks TTYL.
'82 Maxima Sedan x2
'92 Saab 9000 Griffin Edition Wrecked
'80 Ford E100(twisted tranny) SCRAPPED
Top

Dr. Jones wrote:I burned through the thick solenoid ground wire trying to start the car in cold weather. I crimped a new connection on and reconnected it then took it and had it tested (tested good).

If I understand you correctly, what you call the "solenoid ground wire" is the output of the solenoid to the starter. The large lug on the solenoid that the battery cable is not connected to. If we are talking about the same thing here, then . . .

No, that's not correct.

To test the starter motor, use a booster cable (postive one only) from the battery positive terminal to that solenoid output terminal: the starter should spin (it won't engage the flywheel, but is should at least run as a motor).

Using your screwdriver across the large solenoid terminals is doing the same thing, but you aren't testing the starter alone: you're testing the positive battery cable too. That's why I recommend using a separate booster cable for the starter motor test.

Yet Another Faulty Starter Solenoid

This time my new starter (17 Jan 2007) has intermittently stopped working. Either starts or solenoid will give a weak click, faint, or barely perceptable at all. Was not able to hear the solenoid well at first because of all the other GP relays and seatbelt reminder bell dinging and the "Key Is In The Ignition" lady. Of course since the starter is less then four months old I just had to troubleshoot everything in its path first. Ignition switch, wire run to engine bay relay center, starter relay, tranny neutral cutout switch, battery, etc. Finally disconnect the solenoid energizer connector and jumper to the battery pos. post. Heard the solenoid click but no starter motor yet. Not enough recent experience to verify if it was a healthy solenoid click. Held the jumper to the battery another 5-7 seconds while thinking and bingo, the starter started spinning. Car started well after that, another 5 times, then dead. Jumper trick worked again after that ONLY after whacking the side of the solenoid w/ a hammer. Not much swing possible but can almost hear one of the whacks will free up something in the solenoid, then the starter works fine another few or several times.

Limited lifetime warranty starter, now just waiting for the replacement to arrive at the FLAPS, hoping for decent weather to do the R/R.

Do I perceive a pattern here? Coincidental string of starter solenoid failures. Al had at least two, I had one (originally), now another, kassim503 had solenoid problems on his gasser, and 83_maxima had one:

83_maxima wrote:My gasser has had solenoid/starter problems for a while. Turn key, click, turn key click, turn key, solenoid engages, car starts. It hasn't acted up lately, but can be a real bear sometimes.

In fact, refer to this post for more info.
Top

Actually, I've had four bad solenoids on Hitachi starters in the past three months: Two LD28s, one SD22, one L24E.
Regards,
Al S.

Hey I was wondering if anyone knows of any good deals on a starter. The best I found has been from:

Which is a $160 Reman OEM Hitachi starter(free shipping, no warranty), I've heard some bad things about relability with these units, but I really have no complaints.

Mine started dragging bad (I have the rexco solenoid) Then finally just stop working. There are actual pictures of the unit posted here under "LD-28 Forum: Starter Motor" (I lost the cotter pin setup in switching out the solenoid). I have tried now twice to change the brushes and can't get the original solder hot enough to release do you think, if I get the brushes replaced that could solve my problem?

If any one else now or in the future decides to go this route the Napa brushes that most resemble our Hitachi 1.8 kw starters are E703(18mm measured perpendicular to the contact face) the E52? were to large to fit width wise(26mm?).
Last edited by Dr. Jones 13 years ago, edited 1 time in total.
'82 Maxima Sedan x2
'92 Saab 9000 Griffin Edition Wrecked
'80 Ford E100(twisted tranny) SCRAPPED
Top

I check the armature and found no continuity between where the brushes go across and the iron core, but there is continuity between the larger segmented body and the core. The field coil appears to be in good condition also.
'82 Maxima Sedan x2
'92 Saab 9000 Griffin Edition Wrecked
'80 Ford E100(twisted tranny) SCRAPPED
Top
Post Reply
17 posts