I am wrapping up my 240ZD (soon to be turbo) project, but it's been about impossible to get ahold of a diesel flywheel.

NOW, I believe I can easily bolt in a 2+2 flywheel with it's heavy pressure plate, but will this cause my engine to "break up" due to harmonic problems?

Note my 240 Z weighs about 2,000 pounds less than a maxima, so it won't take much rotational inertia to move the car.

Also, I can turn the engine over by hand easily with just a short pipe on the crank bolts...about six inches worth of radius. Isn't the compression supposed to be more like a brick wall when you turn it over?

I'm a bit new to the diesel scene, but gasoline power has been revealed as a bit profane, don't you agree? I like the mechanical technology if a diesel a lot better!

People switch out flywheels on gas engines all the time, and run at more horsepower and higher RPMs all the time with weaker internals and have no problems. If I can use a 2+2 flywheel the project will be done in days, rather than an eternity (weeks).

Thanks for the big pimpin' forum...

I have an LD28 MT flywheel, and it looks to be a LOT heavier than the gasser version.

Diesels want a lot of rotating mass, especially at idle and esp. with a manual transmission.

When you crank the engine by hand, the rings do not seal -- they seal via hydraulic (pneumatic, really) pressure, not by their "springyness". So it's not unusual to be able to bar over a diesel fairly easily.

Are you certain about that 2000 lb figure? I don't have a Maxima Owners Manual here at work, but doubt that there is a ton (literally) of difference between the two. I'll stick out my neck with some made up figures (guesses):

I'll look up the Maxima weight when I get home (unless someone here posts sooner). Can you find the curb weight of a stock 240Z, and estimate how much weight you have removed?
Regards,
Al S.

Well, it's good to know the rings aren't wasted!

My 1970 240Z is one if the first 12,000 made, and so is a couple hundred pounds lighter than later 240s...each successive model of Z became heavier and heavier. It only weighs about 2,200 pounds, a difference I felt the first time I took it for a test drive! Rear disc brakes are lighter than the drum setup as well. I've only heard the diesel Maxima weighs 4,000 pounds, but don't know for sure. Yeesh, I got lucky when I found my car.

Also, the diesel A/C and power steering systems have been deposited into the engine swap refuse box, along with auto tranny extras HA! Anyone in Florida need a *FREE* power steering pump?

Wow, that's what a VW SuperBeetle weighs! With an all-aluminum engine with two less cylinders. Is that a real number?

There's got to be at least 50 lbs more in the cast iron LD head than the aluminum gasser head. I know that my bare Ford/IH 6.9l heads weigh 91 lbs, where a similar sized alum Mazda head is less than half that. Just a guess at that, though.

Also, the diesel A/C and power steering systems have been deposited into the engine swap refuse box, along with auto tranny extras

HA! Anyone in Florida need a *FREE* power steering pump?

Your profile says Portland, OR . . . you travelling to FL?

I'll be at the Portland Auto Swap Meet (the largest on the west coast) in two weeks. If you have no takers on those, and if you're actually in Portland, I'll pick them up then, just to keep them out of the landfill. Member glenlloyd is looking for an A/C compressor -- the diesel version. I can store the Atsugi diesel PS pump (different from either of the two gasser versions) until someone needs it.

Can you tell me where those figures are from? The FSM doesn't list them. Someone measured them?

Uh, can you expand on that? I pretty much only speak American, and though I can read minds, the ability dimishes over distance

It's a real number. These cars are smaller than they seem: when I press the clutch pedal it rests on the front wheel well, while the seatback just about reclines over the rear well. Gross weight capacity for passengers and cargo is a mere 420 pounds. Very Japanese, and later Z car engineering was increasingly determined by American safety regulations and such. The ugly fat bumpers post-240 alone added lots of weight. It's quite a spartan vehicle, to say the least.

For sure the diesel is heavier, but I am surprised at how little.

I live in Portland, but drove down to Florida to visit friends and complete this engine project, as down south there is much better support for such things, i.e. a junkyard on every corner, auto parts stores carry more of everything, engines are sold for hundreds instead of thousands, and it's easier to be picky about new-used transmission mileage. It's hard to find a friend or two in Portland who knows a damn thing about car projects, let alone thinks it's fun to get greasy and bench-press a transmission in place.

I'll save the PS pump, now that I know it's special. And the AC compressor is seized, but welcome to anyone who wants it. What I need is an alternator and a flywheel, HA!

Those figures are from a Zcar.com forum, concerning drag racing and lightened flywheels. It's undesirable to use a light flywheel for drag racing because the rotational inertia is important for launching in a straight line...lighter wheels are good for track use. A member there was inerested in using his "35 pound diesel maxima flywheel" for drag purposes to increase his launching power. Both the 2+2 and coupe gasser flywheels weigh 23 pounds, but the 2+2/turbo example have more clutch plate surface area, and about 300 pounds more smashing power with a heavier pressure plate.

I don't know for SURE what the diesel flywheel weighs. Maybe someone should send me one and I'll weigh it, heh heh.

Old-school slang Dilly-O = "what's the deal?" or, a request for clarification on a foggy issue, such as, can I use a 2+2 flywheel with my diesel engine without problems? It looks bleak...

"Vehicles with optional equipment or California emissions equipment will be slightly heavier."

Wonder how many current model year cars are in the same weight balllpark.

That's one of the main reasons I enjoy driving my Maxima-- its relative light weight makes it feel more responsive.
Top

Cool, the maxima is a lot lighter than I heard. I should have known better than to "underestimate" the weight of a Datsun.

About that flywheel riddle...
"Man, your engine is knocking really bad..."~
Top 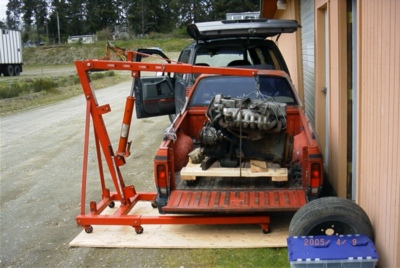 As you can see from the datestamp, I bought it two years ago and immediately put it in storage, where it still resides. I bought it in Tualatin, BION. It was supposed to be a low-miles '83, but judging from the oil cooler, it's an '82.

I'm not really interested in selling the flywheel off it though, because in my universe it is supposedly destined for a future engine/trans swap yet to be determined.

Member Syra had (last June) a 5-spd Sedan for sale in the Spokane area.

Lastly, best of all, car-part.com, a national database of JYs, lists TWO of them for a measly $35, and several others for more. Pay the shipping from the Right Coast, and you'll still be under a bill, which ain't bad.
Regards,
Al S.

About that flywheel riddle: I do not know if running a light flywheel on the LD28 encourages breakage of the crankshaft. I do know that the crankshaft is artificially expensive, and the diesel flywheel may be balanced differently from the L2x.
Regards,
Al S.

you need the diesel ring gear,the L28 starter will never have enough grunt.

you can always add metal to the clutch side.then use a modern clutch off a TD27.
I have used lighter flywheels on LD20II,the flywheel is hugh with the clutch disc fitted in reverse.it uses a front wheel drive pressure plate and bearing.the main problem is smooth idle and things falling off the car.remember that you 240Z wasnt built for this amount of vibrations.steering parts and door glass are suprisingly weak. the LD20 as super soft mounts[some are hydrolic] and shock absorbers.it needs them.

I would be more concerned about the choice of clutch disc.the dampeners inside are inportant to prevent crank damage.driveline vibrations add to engine harmonics to brake cranks.

performance products-remember that if a race car blows up during an event there should be little risk to the driver and onlookers.then you put the car on the trailer and go to the PUB.

on the road its a long wait for the tow tuck and a ding dong with the repairer.

Can you post some info on your 240z? I am very interested in your project as I am planning the same on my 73 240z.
Top

Sounds like I better not screw around with Nissan's flywheel design.

This particular diesel engine upgrade has been hyped a bit to the VW crowd in Portland, as of late I've been parading around like a Greek orator waxing poetic on the particulars of how I'm gonna smoke them all and render their Rabbits, Caddys and even TDIs into..."mah beeitches," for lack of a better term.

Don't get me wrong, Vee dubs are great. But someone's gotta show all those wannabe-German da sein who the REAL hippie flagship is: Datsun! Even my friend with his fast performance-tuned 1.9 caddy grease-burner will fall.

Anyway, I'll surely post photos of the swap and information for you all, as without this forum I would still be stumbling around in the dark, wondering how in the hell to pull it off.

A couple of pics of my LD28 flywheel:: 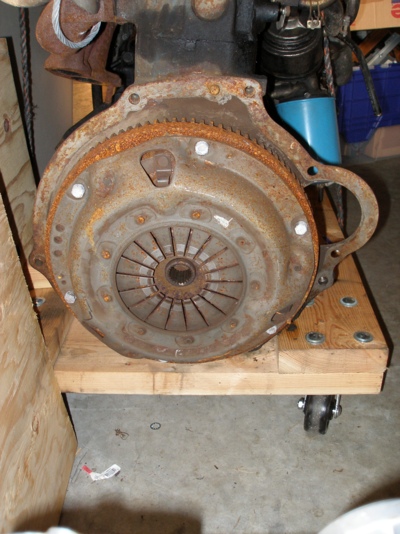 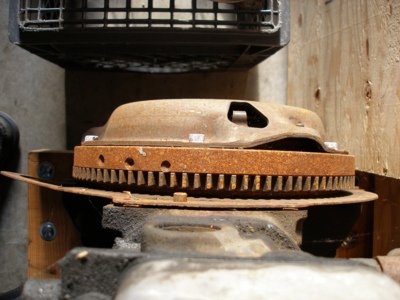