This is probably a frequently asked question, but I have searched this site and have not quite found the answers I am looking for.

The reason I ask is that I have a 82 nissan pickup with the sd 22 that has been abused and is going to be expensive to restore, I can purchase the 97 4x4 for less than restoring the 82. And its in much better shape and 4x4.

Is there a model of 4x4 pickup that I can install the sd22 in that would be less headaches? Nissan? Ford Ranger? ???

I really like the sd22 and can overhaul my motor. I figure there are experienced people on this site that have been there/ done that and would appreciate any info.

Thanks in advance
Randell
Top

I swapped the sd22 into a 1987 hardbody 4x4. Not to much trouble. I did a solid axle swap so that way I didn't have to cut and re-weld the oil pan. The sd22 bell-housing bolted up to the 86 4x4 transmission. Hope that helps.
Top

Thanks Dieseljunky-- that does help. Its good encouragement that there are gas trannys that bolt up to the sd22.

I looked at past posts you have made, and I see where your gas motor was a z24, and a sd22 bolted in its place?

What do you mean by a solid axel swap. I have seen where people talk on here about remaking the oil pans, but what is the solid axel or the difference?

I might get a chance to go tomorrow and look at the 97 pickup. I will look to see what motor it has. Maybe I am kind of silly looking at this rig that is running (250k miles) and thinking of swapping engines. Supposed to have just had $1300 in front end work (tie rods, bearings, and ???).

Randall, what I mean by solid axle swap. I took a toyota axle and modified it to a driver's side drop and got rid of the independent front suspension.

A much easier approach is to find a jeep axle and put it under there. I would rather go through the extra work so I don't have to cut into my oil pan. I am plenty capable of modifying the oil pan but would rather not.

Look at this link.

I have made more progress but need to update some pictures.

Let me know if you have any more questions & I will try to help.
Top

dieseljunky
That is impressive.
I was under the impression the sd22 would not bolt right up to the gasoline transmission.
I passed on a nice looking, low priced 87 truck recently.
82 King Cab 2wd (nice)
82 Reg Cab (body damage)
Anderson , SC
Since Fall 2009
Top

Thanks! Yes they bolted right up. I had to swap the output shaft bearing and had to drill one of the three shifting forks a littler bigger in the bell-housing to make it fit. It is pretty self explanatory when you start to look at the project. I even used the 4x4 transmission. I have seen some people swapping the sd22 transmission into the 4x4 transmission but that really doesn't need to be done. I love to tinker and work on things like this.
Top

the gasser trans by its self, does not bolt up to the SD22..

the starter cut out is on the wrong side..

you take the diesel bell housing/front trans case, and bolt it up to a gasser gear set and rear housing..

you are basically just taking the gear set from one case, and putting it in another..
Top

dn29626 wrote:I was under the impression the sd22 would not bolt right up to the gasoline transmission.

On most of the FS5W71x transmissions, you can take the front case half of the SD22 version trans and mate it to the back half (and all the gears) of a gasser's trans.

The thread on that swap is here.

The "bellhousing" is No. 4 in the pic below, and is really the case for the entire front of the trans. Gears must be swapped in: 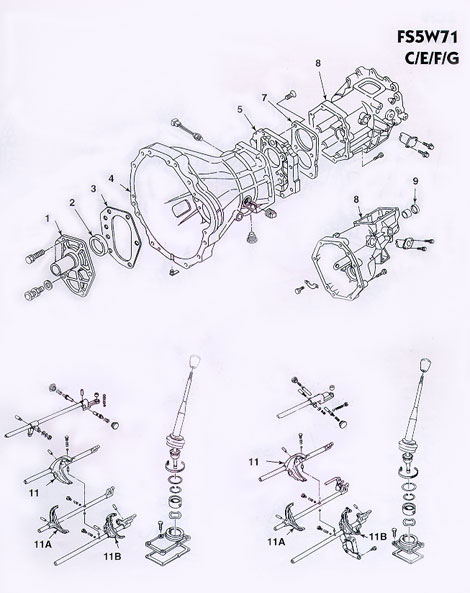 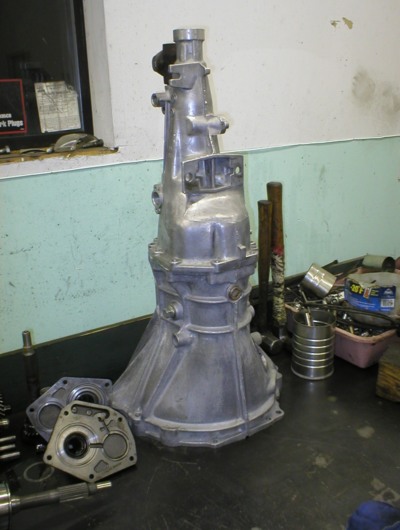 I have had a hard time getting on this site for a while, but now I can.

I went and looked at the 97, It had 2400 on the valve covers. First appearance looked like the transmission case (bell housing) appeared to look smaller than mine. So dont know if it could bolt to a sd 22 or not.

Owner also said that gas motor would go 500K miles and shut the hood and acted like I was bothering him? So I left. It was an alright pickup, plenty of oil leaks, spark plugs were loose and viberating, box was beat up. Not all bad for 250k miles and $2500 could buy it, but not if he doesnt want to be bothered.

Have another guy that buys and fixes older vehicles for resale, said he knows where there are a couple of 84 4x4 pickups with weak motors that he is going to check into for me. I figure that these are probably going to have this same transmission.

Asavage-- do you know which models would have this transmission that I could atleast interchange the front trans case?

Thanks diesel junky, I looked at the site you posted, that looks like a neat project.

Thanks every one, any more info is appreciated
Randell
Top

I really know very little about he D21 trucks that superseded the720 series in 1987, but I am pretty sure at least the first few years of D21 have the FS5W71c trans, and the SD22 case half should fit.