I see that there is a dealer badge on the tailgate, "Dean Rawson - Datsun", which seems to indicate Omaha, NE origin. That explains the fuel preheater and tank-style engine heater installations.
Regards,
Al S.

asavage wrote:I see that there is a dealer badge on the tailgate, "Dean Rawson - Datsun", which seems to indicate Omaha, NE origin. That explains the fuel preheater and tank-style engine heater installations.

Yes, we need some of those contraptions round this part of the country!

goglio704 wrote:How much work would the 83 need to be ready for a drive to TN?

Brakes. It's driveable as-is, but the fluid was non-existant in the MC when I got it, and all I did was pour some in and let it sit a couple of days. The pedal is low, not surprisingly, and it definitely feels like it should have the hydraulics replaced. But it does stop right now, and doesn't pull. I think the rotors pulse. The rack knocks.

Included is a set of new (cheap) rear wheel cylinders, a new (cheap) master cylinder, and shoes & pads (I think: pads for sure, I can't recall if I actually bought the shoes).

Battery hold-down. Caxambu got me a used one from the JY. Just needs bolting in.

Coolant flush. Still haven't done it, and it needs it.

Optionally: IP belt & tensioner. I'd sure hate to get halfway across nowhere and have it break. I haven't flushed the coolant because I pull the radiator when I do the IP belt -- it just allows for a more professional, less stressful job.

Hmmm. Tires are OK. Comes with some odd steel rims on it, but a full set of merely-OK-looking Sedan factory alloys (w/lugs, mostly w/o caps). Yeah, I'd drive the tires that far, no problem.

Hmmm. That's about it, for a trip.

And I'll loan you the special wrench needed to change it out.

The radio is very good, you can turn it up loud to drown out anything you don't want to hear.

Comes with a spare set of front seats -- same color -- that it doesn't need, and a spare RF fender in brown that might improve its looks -- or not, since it would be a mis-matched color, but the brown fender is solid, while the one that's on the Wagon isn't. I also have a spare hood in brown too. We could strap it to the roof, I think. The fender will easily fit inside. Everything's clean.

It has a coolant heater and fuel preheater installed. I don't know whether they work or not, I've never plugged them in.

I can't think of anything else right now. A co-worker drove it ten miles a couple of weeks ago without mishap. It has a one-year-old top-of-the-line Interstate battery. No, wait, it's older than that, I put the new one in my '82 Wagon a year ago, and the '82's one-year-old one in the '83, so I suppose that makes it two years old -- or a bit more.

Honestly, I haven't driven it other than to move it around the parking lot a couple of times in months, and I've never driven it more than five miles myself. I start it up every month and let it idle an hour. I've never even put any fuel in it -- it had a full tank of five-year-old diesel in it when Myrna gave it to me, and I've never used it up. I think maybe you might want to change the fuel filter (or at least have one with you).

What I need (for the '82) is a Wagon driveshaft, if someone can find a good one. I got one at the JY, but it's got bad joints. I've considered swapping them between the Wagons -- but I am ambivalent about that. Now that I'm driving the '82 daily, the start-off vibration is pretty bad. It's quite smooth above 25 though.

Well, I'm off to pull the Aero's trans -- again! I have the credit, I've found a couple of candidate replacement vans, but I'm loathe to take on the debt. I have to at least take a look at the bad trans. Maybe a JY trans for it, maybe I'll gulp and have it rebuilt again.

Matt, I'd really like to find another home for Myrna's Wagon, one where it won't' get parted for the crank and intake.
Regards,
Al S.

Matt & I have been conversing, and one of his Qs was, "how bad is the rust". Since I recently saw the hole in the RR wheelwell of the '82 Wagon, letting water into the interiour, I took a flashlight out to the '83 to see what, if any, rust there might be in the same place. 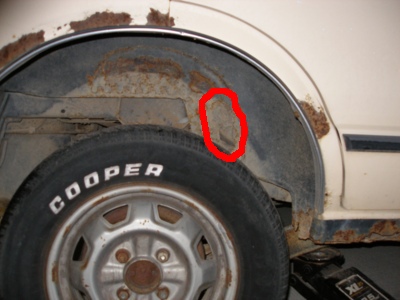 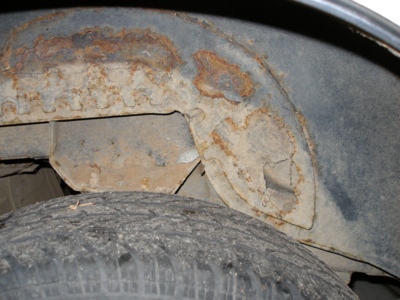 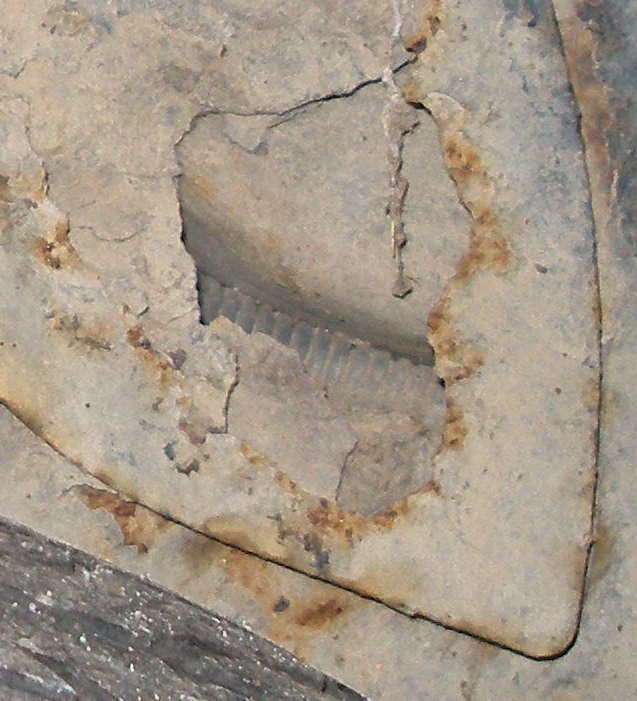 The magnitude is about 3.5" vertical. You are seeing the wiring harness loom and the back of the carpet on the inside of the wheelwell.
Regards,
Al S.

Now that's what I call an open sore! I would guess that the other side has something of the same??

Pass. side is not nearly as bad, but is also perforated. Under an inch, IIRC.
Regards,
Al S.

That's the kind of thing I would expect to see in my area of the country on a car of that vintage..if not worse.

This is now a parts car. Steve, you still need an A/C compressor? This one was quiet, IIRC.
Regards,
Al S.

This is now a parts car. Steve, you still need an A/C compressor? This one was quiet, IIRC.

(in a whining voice) Yes, but I wanted the whole car!

You can have the whole car. Come on out and get it, or pay me to take a week off and I'll drive it there. Really.
Regards,
Al S.

I've got a fellow who wants a pair of LD28s for his boat. I may sell him this Wagon + my spare '82 LD28 if he comes up with the cash. I really hate to, but other than selling this Wagon as a project to someone in the Southwest, what are my choices?
Regards,
Al S.

Boat engine is not a terrible fate for an LD28. The engines will outlive the Maxima chassis in all but the most arid climes. No way around it. Plus, the boat guy shouldn't need the intake hose.

I pulled the '83's driveshaft, separated it, then decided to just put it back in. The centre support brg rubber is bad. The front u-joint is slightly stiff and is no better than the JY '82 Wagon driveshaft I've got laying on the floor under the bench, so I'll put the JY driveshaft in my '82.

Took pics of both rear wheelwells. It's scary but not dangerous. Must make a heck of a mess when driving in the rain; I've not done that.

Warmed it up, drove it six miles.

It accelerates better than my '82. I'm attributing that to the lower rear gears of the '83.

It part-throttle upshifts later and harder, and part-throttle downshifts sooner, though that's harder to gauge because it has one more gear (or the TC) it drops out of at 45-50, depending upon load.

The exhaust if aftermarket from the front resonator back, and doesn't fit quite right, is missing at least one hanger donut, and from the sound inside (after driving my '82 for a month daily) I'm fairly certain there's some exhaust vibration noise. The exhaust does not leak (I did a block-the-exit leak check).

Balljoints are tight, no zerks. Both inner tie rod ends loose. Rack leaks PS fluid, but not enough to worry about for a trip. Battery needs hold-down installed.

Thermostat does not keep temp up as high as I'd like.

The front vibrates. Feels 75% chance it's just out-of-true rims, bad tires, or bad tire balance, but it *could* be the tie rods. At 50-60 (my test speed tonight) it was not dangerous-bad, but could be fatiguing. I will take it to the tire store and have the front tires checked for runout and balance, maybe tomorrow. If the rims are bad, I'll throw a couple of the alloys w/Michelins on the front and retest.

Brakes stop straight. Pedal is low: out of adjustment rears + air is my guess. It stops fine and I'm not going to play with them, it's safe enough for me to drive if I had to.

The trip meter is just as dark and hard to see at night as my '82's.

The ride is much better in the '83 (coil rears) than my '82 (leaf rears), *much* better rear suspension travel.

The '83 smells a LOT better than my '82 with the mouse urine smell still faintly present.

Trans fluid needs changing but is full. I might want to suck out the panfull and refill, just to get some additives in from the new fluid. It seems to work fine though.

The engine/trans is not leaking (except the VC gasket and the PS rack).

Despite the Rev A bus bar, my replacement of the wires to it, and good numbers on the compression test, it does not fire right up (neither does my '82). I have taken to keeping on the starter until it will accel on its own for both of them.

All lights are working.

PS seems lighter to me than the '82. LF tire was very low on air, I checked the pressure on all four and only that one was low. It's a "Kirkland" tire (Costco house brand, stay away).

Oh, the CC doesn't work. The console light lights up, but no action. Most likely another vacuum leak to sort out.


asavage wrote:Took pics of both rear wheelwells. It's scary but not dangerous. Must make a heck of a mess when driving in the rain; I've not done that.

Jacked it up for these pics, rear axle hanging.

Take a look at this! Driver's side: 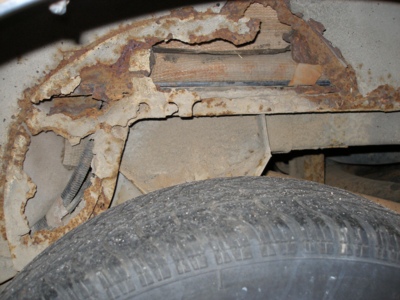 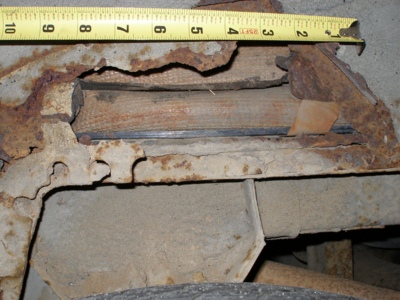 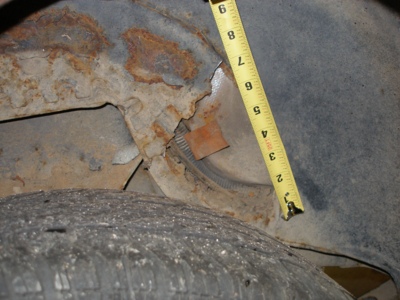 There are holes in the rockers too, but the subframe is rust-free. It's weird how these rust out the way they do.
Last edited by asavage 14 years ago, edited 1 time in total.
Regards,
Al S.