Well I did a little searching and found some info on MPG records and what not, but I was wondering what ya'll found was a typical MPG for city driving? I've been noticing that the needle moves a little quicker than I would think it should, I've driven around town for the past few days in relatively light traffic and have gone through a bit of fuel according to the gauge....it started out just below the full mark and now sits almost half way.....I didn't keep track of mileage as I didn't notice it until today.....

Which leads me to the next question, are the gauges on this car fairly accurate, or does it really differ car to car? My Mercedes has a gauge that has never worked, I keep track of mileage. I've had lots of old cars that have had accurate and not so accurate systems.

Oh yeah this is the '82 LD28 engine in a Maxima wagon, and no signs of rich fuel mixture, and it really runs great!! Just wondering about the fuel usage.....

I've never had a wagon, but an 82 sedan with the automatic can get high twenties for mileage around town. I've never pondered the gauges that much, but they don't seem to be very linear. A fillup in a sedan is usually only about 12, maybe 13 gallons.

Also, if you are still running out old fuel, that can affect mileage.
Matt B.

My 82 wagon so far gets about 26-27 on about 70/30% highway/city - maybe 65/35 - w/about 60 lbs in the back and 230 in front (me); but I make a point of driving like an old lady. I use the Stanadyne diesel additive to give our ULSD some lubricity; I don't know if this matters to the LD28 but it makes a huge difference to my Ford 6.9 - the Ford stalls out at stop signs w/out the additive. The Maxima gauge appears accurate, though it kinda accelerates as it drops below 1/2. I think the top 1/4 has an extra gallon in it and bottom 1/4 is missing one. It appears from a couple of my fill-ups that my car doesn't fill completely if the front end is at all down hill at the pump; but the gauge reflects this accurately.

I think fuel makes a difference. I've read many comments from people trying to get good gas mileage over the last couple years and it appears that different brands of gas and different stations will give different (but consistent) results by as much as 5%. I suspect ditto w/diesel, and then there's the summer winter thing also. Bio will give you somewhat less MPG but I haven't tried it yet so don't know the details there.

On trips (I-5, highway), mine will top out at about 30-31. I did record 32 on two occasions recently but suspect incomplete fill or something, as my previous years of ownership never saw that high.

Towing: mileage plummets like granite when I put a trailer on the back. I've seen upper teens for mileage when dragging a couple thousand pounds. Surprising, but true.

These figures are for petrodiesel, but to my surprise, and unlike other diesels I've driven, the mileage did not drop significantly when I was running B100/B99. OTOH, my 720 SD22 did drop 2-3 MPG on B100.

The '83s (AT, OD) are reputed to be able to obtain mid-30's, and I've heard enough reports of this that I do credit those figures. I suspect that it is unlikely to achieve much above 35 or so consistently unless extraordinary measures are in force (re-gearing, over-inflation, coasting, drafting, and other, less undesirable ideas).

The Wagons were never offered with the 5-spd manual trans, but there is no technical reason why a Sedan's MT setup couldn't be transplanted if one really wished, and that is the only reasonable way to obtain OD on an '81-2, because the early floor pan will not accommodate the later OD AT.

Fuel gauge: like most cars, it takes a long while to drop to "F". You will note that the "F", halfway, and "E" marks are not equally spaced. My Wagon will go a good long ways past "E". It is not particularly accurate, but few fuel gauges are. My '89 Aero's digital dash is one of the exceptions, it seemed very accurate, and I could not drive very far on "E", nor did it require 100 mi. to drop from "F" to the next digit. 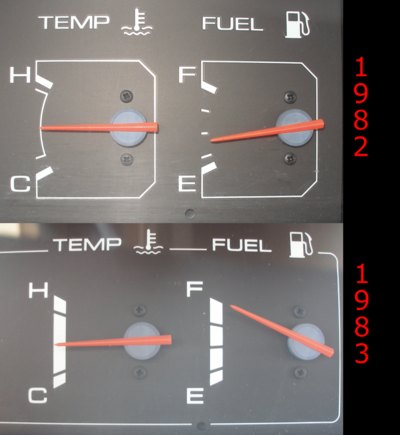 I've been noticing that the needle moves a little quicker than I would think it should, I've driven around town for the past few days in relatively light traffic and have gone through a bit of fuel according to the gauge....

When looking at a Maxima fuel tank guage (out of the car and in your hand) the electrical part has contacts close together near full and further apart closer to empty. So the answer to your question is that the further it gets from full the faster it falls...your hypothesis is correct.

The only way to be sure what fuel you use is Divide miles by gallons.
Last edited by diesel-man 13 years ago, edited 1 time in total.
Top

When looking at a fuel tank gauge (out of the car and in your hand) the electrical part has contacts close together near full and further apart closer to empty. So the answer to your question is that the further it gets from full the faster it falls...your hypothesis is correct.

The only way to be sure what fuel you use is Divide miles by gallons.

Personally, I have never noticed a difference in spacing in a fuel sender, but I have never looked at one closely enough to tell the spacing.

Like Al, I notice fuel economy drops to the floor when towing in stop n go situations. Not that much worse on the highway though, I think its cause the car needs to chug up to speed and rolling down the road dosent require too much power
'83 maxima sedan, l24e, a/t, black