I thought I'd start a new thread on this since I took the other one way off topic.

With the help of other members (mainly plenzen & asavage) I think I've figured out the basic function of the "Cold Start Device" after spending hours of playing around on mine and figured out that it does not work.

Correct me if I'm wrong.

picture courtesy of "after oil" and asavage.

The problem I have found with mine is that the CSD pressurizes as soon as the engine is turned on, which leads me to believe that there is something wrong with the wax pellet internally. I'm pulling mine apart soon to check it out
1987 Nissan D21 - SD25
Top

jozsef61 wrote:I thought I'd start a new thread on this since I took the other one way off topic.

We have a thread on the VE-style CSD already (from which you borrowed the pic above), but if you insist . . .

I suppose that at this point in time I might be the most qualified here to respond to this. If not, and someone else has something to add, please jump in.

First, let me remind folks that though the VE-style IP is fathomable, it is not a simple mechanical device. It is Germanic in nearly the most extreme sense. If one is serious about learning the functions of the components of the VE-style IP, for a modest investment of US$27, one can purchase the Bosch "Distributor Type Diesel Fuel Injection Pumps" softcover technical "Yellow Book" from Amazon. It is slim, at 134 pages, but fairly dense. It is chock-full of illustrations that are better than average. It is also, unfortunately, a starkly translated manual and as such must be read with that in mind; it is very easy to misunderstand the intent of a statement, and this will lead you to incorrect conclusions that can be hard to bend back to reality later.

With the foregoing out of the way, I have only one correction/modification to what you've stated above:

. . . The problem I have found with mine is that the CSD pressurizes as soon as the engine is turned on, which leads me to believe that there is something wrong with the wax pellet internally.

The thermal element may or may not be wax on the D21 version of the VE-style IP, and I have my doubts as to whether the wax melts. I envision (a fancy word for imagine) that internally, the CSD is no more complex a device than a conventional wax-pellet thermostat that controls the overall temperature of the cooling system. It moves a mechanical device that pushes a plunger, part of which protrudes outside the thermal element and can act upon the external linkage. The photo which member "after oil" provided and which I marked up shows this interaction.

If you are successful in disassembling the thermal element portion of the CSD, please take photos if possible and send them to me.

Regardless of the internal mechanics of the thermal element of the CSD, you have stated the functions of the CSD correctly as best I can tell.

Here, I reproduce three pages from the above-mentioned Yellow Book, with the text OCR'd for the local search function (click on any image for larger): 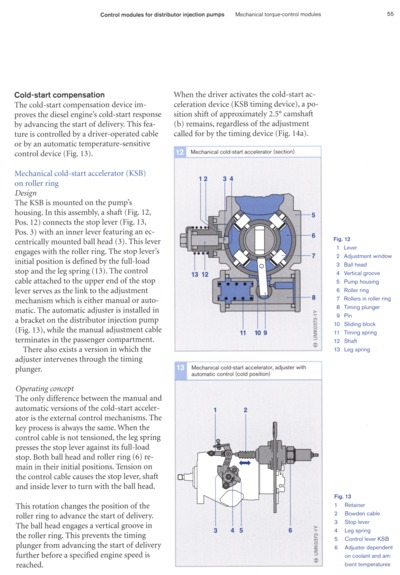 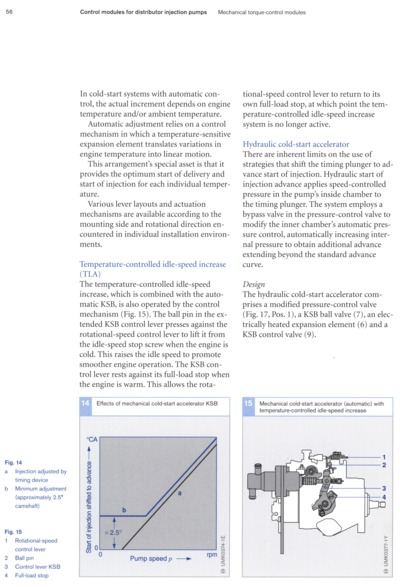 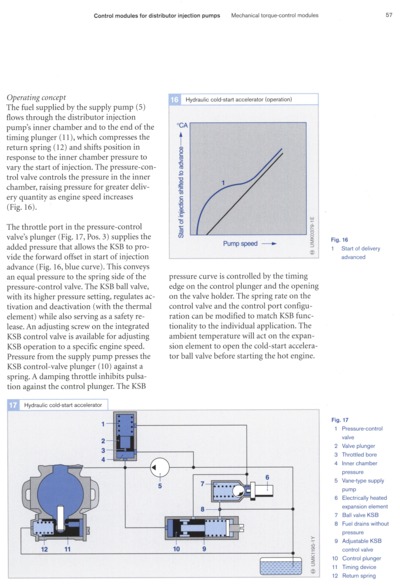 Design
The KSB is mounted on the pump's housing. In this assembly, a shaft (Fig 12, Pos 12) connects the stop lever (Fig 13,
Pos 3) with an inner lever featuring an eccentrically mounted ball head (3). This lever engages with the roller ring. The stop lever's initial position is defined by the full-load stop and the leg spring (13). The control cable attached to the upper end of the stop lever serves as the link to the adjustment mechanism which is either manual or automatic.
The automatic adjuster is installed in a bracket on the distributor injection pump (Fig 13), while the manual adjustment cable terminates in the passenger compartment.

There also exists a version in which the adjuster intervenes through the timing plunger.

Operating concept
The only difference between the manual and automatic versions of the cold-start accelerator is the external control mechanisms. The key process is always the same. When the control cable is not tensioned, the leg spring presses the stop lever against its full-load stop. Both ball head and roller ring (6) remain in their initial positions. Tension on the control cable causes the stop lever, shaft and inside lever to turn with the ball head.

When the driver activates the cold-start acceleration device (KSB timing device), a position shift of approximately 2.5° camshaft (b) [2] remains, regardless of the adjustment called for by the timing device (Fig 14a).

In cold-start systems with automatic control, the actual increment depends on engine temperature and/or ambient temperature.

Automatic adjustment relies on a control mechanism in which a temperature-sensitive expansion element translates variations in engine temperature into linear motion.

This arrangement's special asset is that it provides the optimum start of delivery and start of injection for each individual temperature.

Various lever layouts and actuation mechanisms are available according to the mounting side and rotational direction encountered in individual installation environments.

Hydraulic cold-start accelerator [3]
There are inherent limits on the use of strategies that shift the timing plunger to advance start of injection. Hydraulic start of lnjection advance applies speed-controlled pressure in the pump's inside chamber to
the timing plunger. The system employs a bypass valve in the pressure-control valve to modify the inner chamber's automatic pressure control, automatically increasing internal pressure to obtain additional advance extending beyond the standard advance curve.

Operating concept
The fuel supplied by the supply pump (5) flows through the distributor injection pump's inner chamber and to the end of the timing plunger (11), which compresses the return spring (12) and shifts position in response to the inner chamber pressure to vary the start of injection. The pressure-control valve controls the pressure in the inner chamber, raising pressure for greater delivery quantity as engine speed increases (Fig. 16).


The throttle port in the pressure-control valve's plunger (Fig 17 Pos 3) supplies the added pressure that allows the KSB to provide the forward offset in start of injection advance (Fig 16, blue curve). This conveys an equal pressure to the spring side of the pressure-control valve. The KSB ball valve, with its higher pressure setting, regulates activation and deactivation (with the thermal element) while also serving as a safety release. An adjusting screw on the integrated KSB control valve is available for adjusting KSB operation to a specific engine speed. Pressure from the supply pump presses the KSB control-valve plunger (10) against a spring. A damping throttle inhibits pulsation against the control plunger. The KSB pressure curve is controlled by the timing edge on the control plunger and the opening
on the valve holder. The spring rate on the control valve and the control port configuration can be modified to match KSB functionality to the individual application. The ambient temperature will act on the expansion element to open the cold-start accelerator ball valve before starting the hot engine. 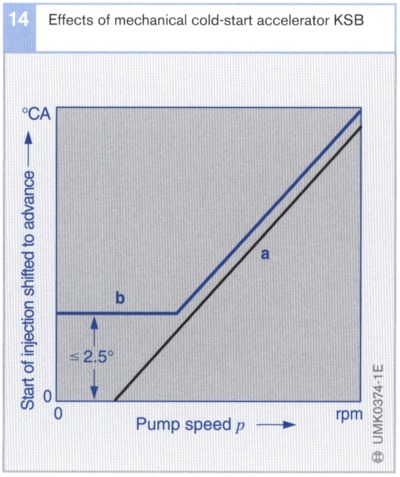 Note 2: This number translates to 5° crankshaft.


Note 3: Disregard discussion of the hydraulic CSD/KSB, as it does not apply to either the SD engines (or LD engines that we see in the USA).
Regards,
Al S.

asavage wrote:First, let me remind folks that though the VE-style IP is fathomable, it is not a simple mechanical device. It is Germanic in nearly the most extreme sense.

Back in the early '80s", while I was working in a BMW dealership, I recieved this. It's SO TRUE. 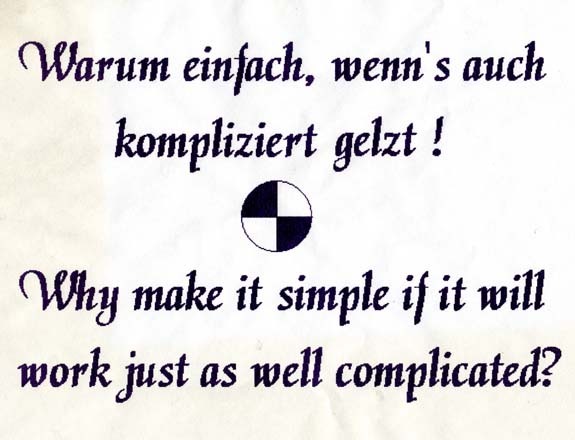 Just throwing out an idea here, but. Does your thermostat on your SD25 work? I mean work correctly? I only ask that because I believe there are Fail Safe versions of the thermostat out there. If the one you have is failed (open) then I think perhaps the coolant is allowed to flow freely and unrestricted at start up and perhaps fooling the CSD into thinking that the engine is already warm.
Just a thought, and changing or checking a thermostat I would think would be easier that attempting to remove the CSD from the IP. (If it can even be removed without dire consequences internally)