Because I'm certain to forget this info, I write myself notes like this.

Problem: APC UPSs sometimes have a float charge voltage that is too high and tends to cook batteries. Here's a pair of gel/AGM batteries from a SUA1000 (not an XL) that have swollen so badly that I had to disassemble the case and pry the batteries out of the metal cage: 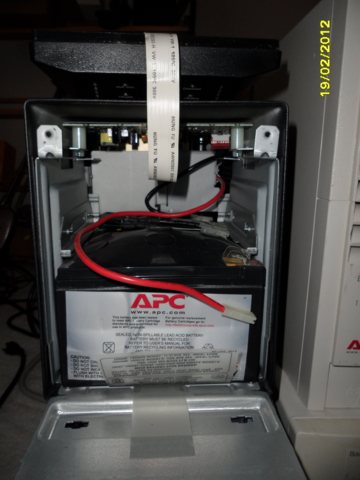 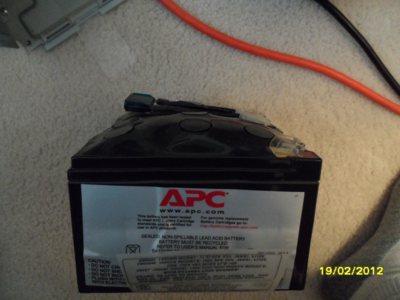 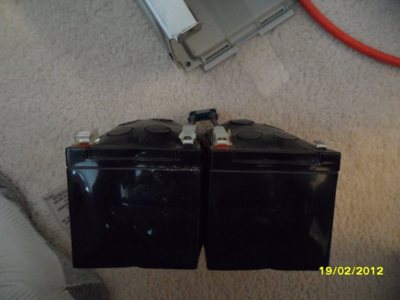 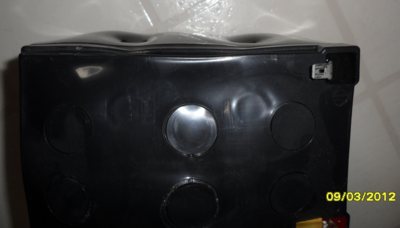 In the past, I've used multiple Costco FLA (Flooded Lead Acid) batteries to power my UPSs, and over the years I've learned to carefully monitor the water levels, because various UPS' charging circuits overcharge and keep the electrolyte gassing.

I stumbled across one post by Jacob Joseph that gave some clues to programatically changing the float charge voltage on some APC Smart-UPS models. Jacob indicated that he could change software parameters to change the float charge voltage on his SUA1500RM2, but not his SUA700, and he gives specifics. He goes on to relate how to modify the circuit physically on a Smart-UPS 1000, when a programmatic solution doesn't work.

At first, I was not able to make Jacob's software recipe work: I could not achieve SM (Smart Mode) mode, due to a missing step in his instructions. Later, in the APC Support Forums, I came across a reference to using <Shift+Y> as a trigger to put the UPS into Smart Mode, and then found this post that agreed. My missing first step: start with Capital Y.

But, while I could get my SUA1000XL into Smart Mode, I couldn't get it into PROG mode.

Then I found a reference in a third place that any & all SmartSlot cards must be removed before beginning, and Voila!

Note that APC has many different firmware revisions for their Smart-UPSs (as opposed to the firmware in the SmartSlot devices!), and the features available in Smart Mode vary. My SUA1000XL has firmware Rev. 631.3.D

Information on float voltage
According to Wikipedia:

My SUA1000XL has been charging to 27.66v for a 24v nominal system. This is consistent with 2.30v per cell (2.3v * 12 cells = 27.6v) for my Costco Flooded Lead Acid type batteries, and the batteries would probably be just fine if I left this charge float voltage alone. As long as the float voltage remains under the gassing voltage, the FLA batteries are fine (setting aside periodic equalization). For a 25°C/77°F temperature, that works out to

2.39 is the gassing voltage at that temperature: 28.7v for the pack, the voltage to stay under.

Which helps to explain why so many UPS batteries don't even make it to 3 years.

I was able to change my SUA1000XL (with external Costco FLA batteries) float voltage from a Battery Gain Constant of (unknown) and 27.67v, to constant E7 and 27.45v . 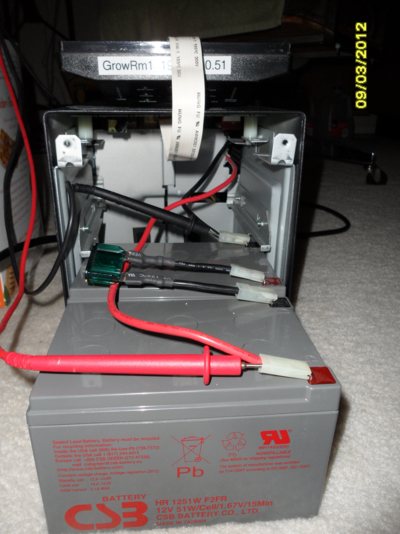 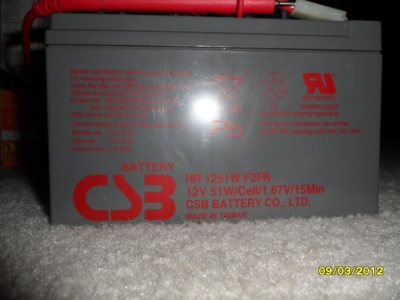 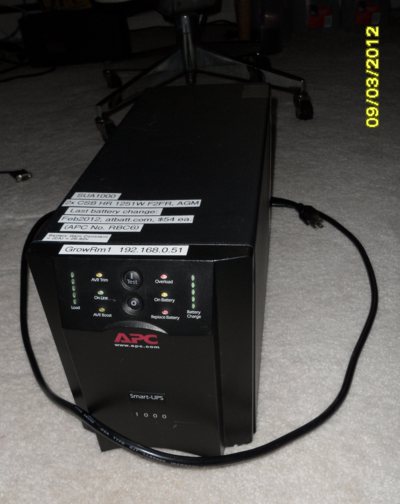 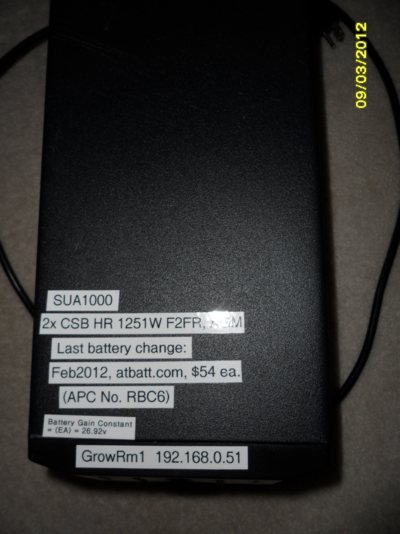 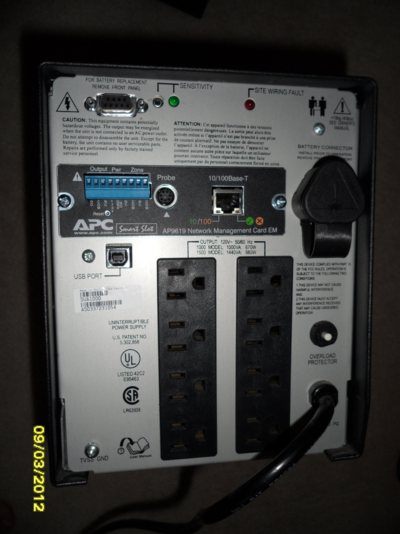 Thank you so much for this post. I found out that one of my Smart-UPS 1500 (IBM rebranded) was charging at 27.9v! and the other was at 27.4v. I've adjusted one of them to 27.1v with genuine APC batteries and the other will be adjusted soon.

Is ~27.1v ideal for genuine APC batteries made by CSB?

I would think so.

Do you know if it's possible to adjust the fan settings in PROG mode? Both of my IBM branded 1500 units are old so the fans don't turn on until the power goes out or running with over 75% load. I recently purchased a Dell branded SUA1500 (DLA1500) and the fan is constantly on, even when unplugged from the wall.

I did some googling and apparently all units manufactured after ~2007 are like this. The fan is supposed to spin constantly at a "low" speed, then speed up when running on batteries. Problem is that even on "low" speed, it's way too loud for home use.
Top

I've heard of the fan problem before; fortunately, both of mine are old enough that the fan stays off until the power is out, and I like it like that!

If you hear of a way to turn off the fan on the later ones, I want to know! It's not a current problem, but if I acquire a newer one . . .
Regards,
Al S.

I took apart my UPS today to clean out the dust inside (spring cleaning) and realized that the float voltage is actually temperature sensitive. When it started out cold around ~27C it was charging at 27.3V and after a while it got up to ~31C, dropping the voltage to 27.1-27.2V. All measured with DMM and the temperature reading was from PowerChute.

I run my battery externally to keep the UPS and battery cooler so this doesn't really benefit me but it's an interesting hidden feature.
Top

Temperature compensation for charging voltage has been around for a long time. I didn't think to mention what the temp was when I was adjusting mine. I think the CSB spec voltages were at room temp.

I run one of mine with a stock-style CSB inside (the SUA1000), and for another that has the external battery connector (SUA1000XL) I bought the mating connector from Grainger* and a bit of 10ga wire from Home Depot, and have it running on a pair of Costco (Johnson Controls) deep-cycle marine batteries in a plastic tub.

In the past, before I lowered the float voltage, I'd have to top off the batteries' water every few months, but now it does not seem to use any water. 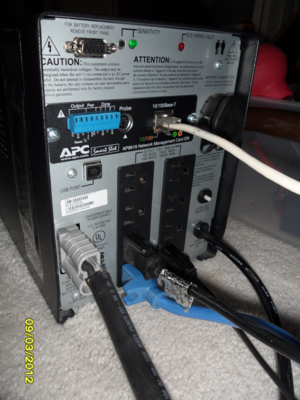 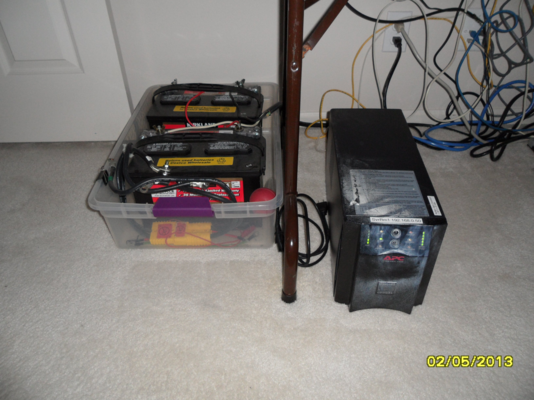 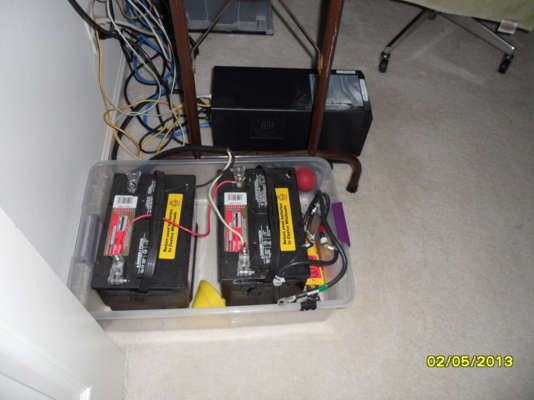 * I think the connector I purchased was an Anderson Power Products 6319 SB50, a 50A (nominal) rated unit that can accept 6 ga wire and is less than $5 from Mouser or Allied, though it's $9 at Grainger, but Grainger is my 7-Eleven and they had it in stock, so I didn't order it, I just paid the premium. I needed only the one.

I picked up a SUA2200 today and as expected, the float voltage was too high: 55.4v so I followed this procedure but the actual DMM voltage was not responding even though everything looked normal in Hyperterminal.

I fixed it by running APC Fix: http://www.apc-fix.com/ with Auto batt calibration checked.

Once this prog connected to the UPS, the voltage I set in HyperTerminal took effect. Running the prog again would revert the voltage back to 55.4v, requiring another connect to lower the voltages again. It's as if the UPS has 2 "modes", one where the voltage can't be adjusted and another where it can.

I have a feeling some of the UPSes that didn't respond to adjustment might just need to run the APC fix prog.
Top

Good info, Thanks for posting it.
Regards,
Al S.

Hopefully this thread revival is okay..

Anyways I have a Smart SUA1400 model that allows me to change the float voltage in the PROG mode everything appears correctly but when measuring the voltage with a DVM it is still 27.8V instead of the 26.9V I set it to even though when I query the UPS it does say the battery voltage is 26.9V I guess I will have to try APCFIX on a windows box.
Top

So many to choose from. 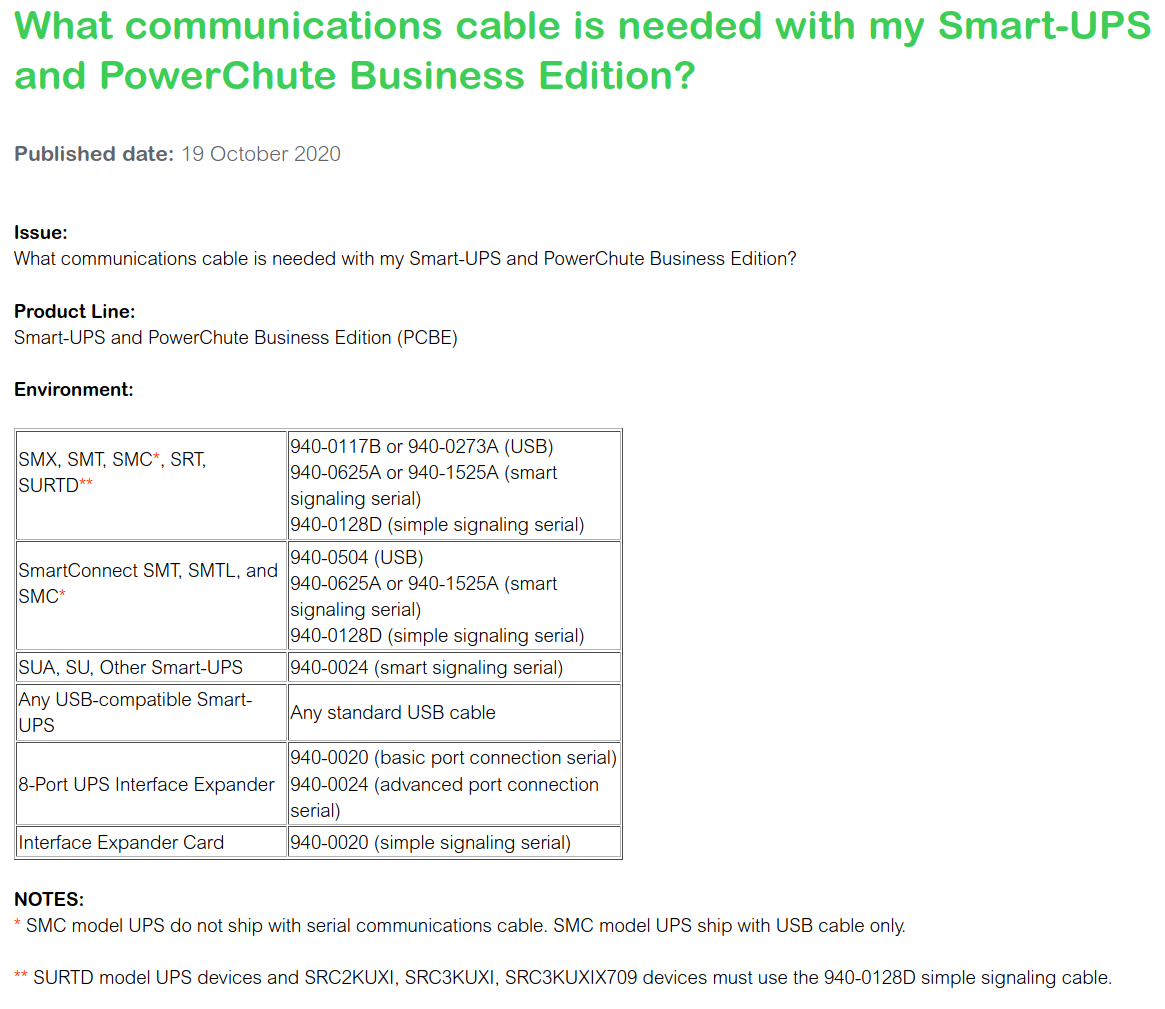