Hard starts: No heat, no volts, no glow?

Use 10 gauge wire or heavier. 10 gauge is commonly available and is suitable for up to about 50a continuous. If you can find 8 ga., so much the better. 10 ga. is what Nissan used. The wire isn't the problem, the connectors are.

If you use ring terminals (and you should), I advise not relying upon the crimp connectors. I solder everything. The crimps and connectors are the trouble points.

There is supposed to be a fusible link at the battery that feeds the GP wire to the GP relay. While other mfgrs crimp the wire to the fusible link, Nissan sometimes provides a terminal. Crimp it. I can't advise bypassing a fusible link, that's asking for an underhood fire one day. You can't solder to fusible link material, so make sure you get a good crimp.
Regards,
Al S.

Old Smokey wrote:-snip-If anyone has any advice on running these parallel wires, please let me know. I'm supposed to be moving out of my apartment right now, so I've gotta get after it.

Note the white wire. This is parallel for the single most voltage loss. 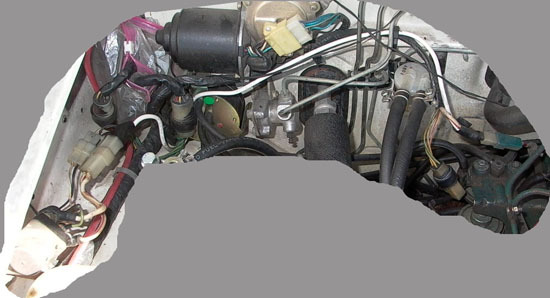 I also "made up" a new harness with a bit greater gauge wire to the glow plugs.

You do know that the AutoGlow module stays ON until the ampere relay for the glow plugs clicks OFF .... right? Once the engine starts running, the glows are kept ON for 30 seconds. This has little to due with the yellow light on the dash. Another or two on these forums have been over this in detail.

It's been a long day. Got the camera going again and just signed up with photobucket, so hopefully this post will be a little more visual. I apologize for the photo quality. 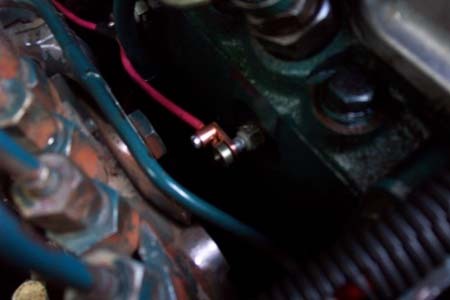 I then went about parallel wiring. I wired directly from the GP relay post that feeds the plugs (white striped wire) to the #4 glow plug. I used 8 GA wire and copper terminals. It's the black wire arching up. 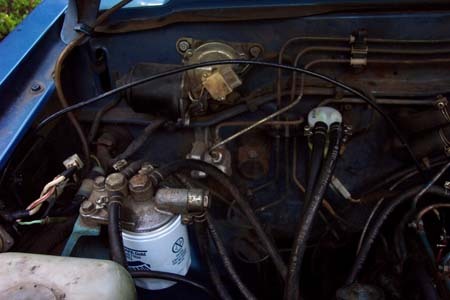 Kind of hard to see but it bypasses both spade connectors on that circuit.

Next I went about trying to fix the hack job that was done to the fusible link at the battery's + terminal. Someone had spliced the four link wires with the small hot wire off the positive terminal and taped them. It's still not pretty and probably has a bit of resistance, but I cleaned it up, respliced and capped with a wire nut: 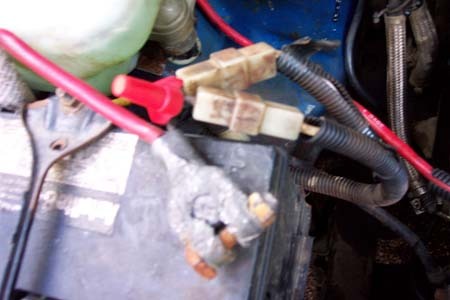 Everything was all set to go. The radiator was back in with some coolant flush, new fuel filters, pump primed. I was getting antsy. I hooked up the GP relay to its 2 connectors. Shortly after, a thin line of smoke came up from the battery's fusible link. The white hot wire to the GP relay was scalding. It took me at least an hour of using the multimeter and reading the wiring diagram in the FSM before I noticed something odd.

The GP relay connector that joins the hot wire from the battery (+) and the white-striped wire with their matched wires was reversed! 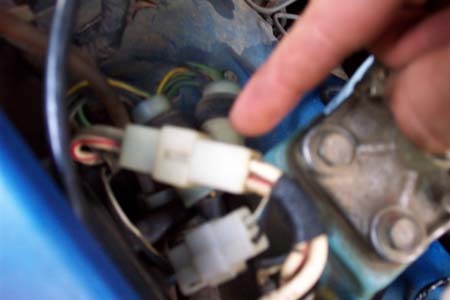 I have NO idea how this happened. It must've been intentional because I had to switch the wires physically. The connector only works one way! I don't get it. I also don't understand how I could've been driving around with them switched like that.

After finding that I had low voltage at the starter, I cleaned the battery posts and terminals with light sandpaper. I'm pleased to say that she started right up after that!

No sputtering, stalling, coughing, death cloud of smoke, etc. There was some smoke, but the ease of starting was leaps above what I had been experiencing. The afterglow timer appears to now be functioning properly, too! Well, I heard a clunk after the 30 seconds. It used to be immediately.

I can't get those switched wires out of my head though. I'd like to believe that they were the cause of all my starting problems. To me, the relay circuit is just a loop. It shouldn't matter which way the current flows through the relay, should it?

But maybe I wasn't even glowing AT ALL before. I just don't know.

Well, that's about it for now folks. I'm sure there'll be many more quirks I ask about. Thanks to everyone for all your help. I hope I'm not being prematurely relieved that I've solved my hard starting, but everything seems in order.

The only thing I noticed was that the heater didn't function, even with a thermostat installed. Could it just be so filled with gunk that there's no heat transfer? I'll save it for another topic.

Oh, and if anyone has any idea about why those wires were switched or what symptoms that would cause, I'd be curious.
1982 720 KC
Top

Old Smokey wrote:The only thing I noticed was that the heater didn't function, even with a thermostat installed. Could it just be so filled with gunk that there's no heat transfer? I'll save it for another topic.

3/4 of the way down on the previous page Al suggested you flush out the heater core while you had the radiator out (coolant drained) anyway.

The only things I would add is to have the heater temp control set to full hot when you do this. And preferable to have both heater inlet and outlet disconnected-- a lot of junk can come out of the heater core and it's better to direct this muddy drainage to outside the cooling system.

Congratulations on your repairs.
Top

That positive battery terminal looks terrible. Ream it, and install it so it is flush or below-flush on the post. NEVER hit the terminal to make it fit -- that breaks the cell tie bars -- either use the correct terminal spreader tool . . .

. . . or take the pinch bolt out and use a No. 3 flat blade screwdriver and pry it apart.

I'm not crazy about a wire nut in automotive work. They work OK in stationary applications, but there's a lot of vibration around an SD.

I theorize (I am having my Sunday medicinal microbrew): the GP relay does not care which terminal is "in" or "out". However, you paralleled your wiring with the OEM wiring. That's fine, until you plug in the reversed wiring, and at that point the GPs are ON all the time, due to feed to relay via your separate wire, OEM wire from that relay terminal to connector, reversed across connector to the GP bus. The constant draw overloads the weak point in the system: the mess at the battery terminal/fusible link.

Does the terminal look bad? I wouldn't have known. I'm not sure what you mean about spreaders. When are they used? I took both battery terminals off and sanded them lightly. They didn't put up much of a fight.

What you say about the loop makes sense now. It seemed like it shouldn't matter which wire got the juice. But my direct wiring opened up a new circuit. Damn. That means that I ran the glows for about 5 minutes until I noticed the smoke from the fusible link. They were brand new this morning. Hope I didn't damage them.

So my hopes of having the afterglow timer "fixed" magically by the wire switch are probably not a reality. I'll go through the tests outlined on this forum and in the FSM.

Old Smokey wrote: Does the terminal look bad? I wouldn't have known. I'm not sure what you mean about spreaders. When are they used? I took both battery terminals off and sanded them lightly. They didn't put up much of a fight.

The spreaders are like reverse pliers that open the hole on the terminal a little bit so you can get the top of the post on the battery over the terminal. the same thing can be achieved with a flat bladed screwdriver acting like a pry bar.

I dont like wire nuts in mobile situations, wire nuts are more of a stationary thing, they rattle off pretty easily. Id go with a solder or a crimp connection, preferring the solder connections.
'83 maxima sedan, l24e, a/t, black

Prying with a screwdriver is best effective with the pinch bolt removed. Otherwise, you end up doing cosmetic (and sometimes more than cosmetic) damage to the terminal.

I call it a "battery speculum".

It's two-piece design with solid handles instead of the crappy four-piece folded sheet-metal-handles design everyone else has seemed to have migrated to. Don't buy one of those, with the riveted handles. KD sells one like that: garbage.

crzhors wrote:Hello Andy,
Just for fun, checkout my Oil Cooler, at "users's rigs"-Challenger 40. The 4th photo is maybe what you have ahead of you! It just gets better! Good luck and "Git er' Done" JD

I'm pretty sure the heater core is plugged. I haven't tried the hose method yet but wonder if it'll do anything. Earlier in this topic, someone mentioned using an air flush system of some kind. Maybe that would work. I just hope the sediment comes out with out much of a fuss. I REALLY don't want to take the oil cooler off. Onward!

No kidding!
Last night, I had an opportunity to try a trick I'd heard about, utilizing a shop vac.

I had to replace an oil drain plug on a generator, on which I had just changed the oil. I'd heard that one can use a shop vac on the oil filler whilst removing the plug, and not lose any oil.

I wanted to replace the static drain plug with a fumoto ball valve & nipple, because of the eventual location of the generator won't allow graceful use of an oil pan.

I enlisted the help of my boss, who manned the vac, and tried it. With only a partial vacuum via the hose to the filler hole, I was able to change the valve with no oil loss. Didn't even get my fingers oily.
Top
Post Reply
27 posts