I'm working along, minding my own business, and another one falls into my lap.

Boss on his way to lunch, stops by the shop that's fixing one of our service vans. Shop's owner offers him this Maxima, just for the service fee: owner declined to repair and gave Affidavit of Lost Title to him.

So I bought it, unseen, for $50. Drove the four blocks to the shop, gave him $50, ask him what the story is. He says it's tired, will start with ether but lacks power and compression. I asked if a compression test was performed. "No, but it acts just like the 300D I used to own, had to start it using acetylene in the winter . . . " More humourous anecdotes followed.

I come back after closing with 12v test lamp, spare battery, some clip leads. No juice to GP bus, as I kind of expected. Turns out to be the all-too-common melted-down 5/16 connector on the fusible link. Used a clip-lead to hold the Main GP Relay to ON, monitored the GP Bus with the 12v test lamp, wiggled connector until I got some glow at the lamp. Battery pretty dead, so I left the GPs glowing at this reduced voltage while I dragged over a fresh battery and connected jumper cables. After that (glowing all the while), I reached in and twisted the key: fired right up, no hesitation at all (55°F ambient).

I have literally only twenty minutes time with this thing, so I know almost nothing about it. 259k miles, AT, engine is definitely an '83 with the bypass oil filter setup, so I assume the trans is L4N71b but only drove it four blocks twice and never hit 35 MPH so don't know for certain.

It needs work. Seems to run OK and came up to temp perfectly. The ride is very nice (compared to my DD '82 Wagon) and acceleration is quite good (again, compared).

Anybody want another project? I'm overbooked for the rest of thisyear. I'll make somebody a heck of a deal on this, just to take it over and love it. 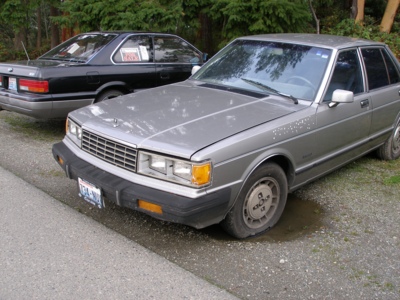 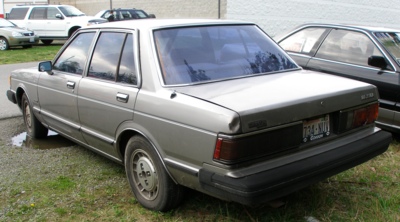 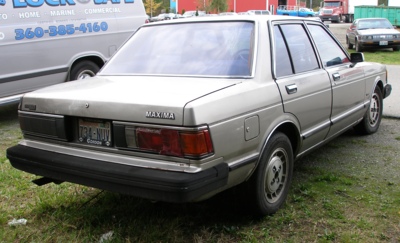 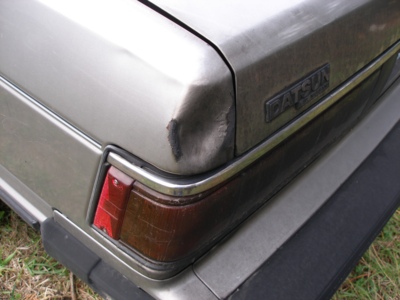 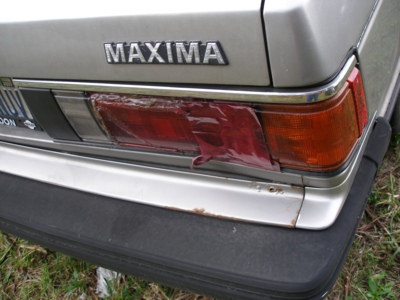 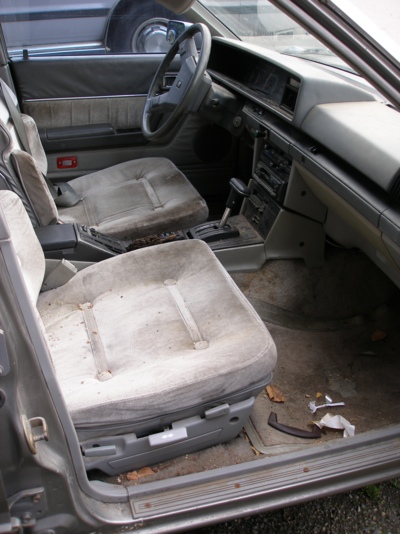 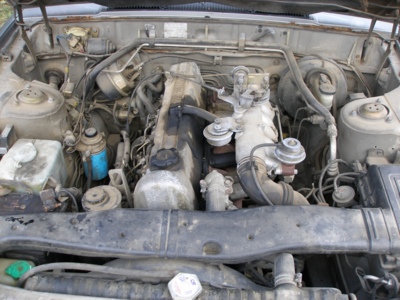 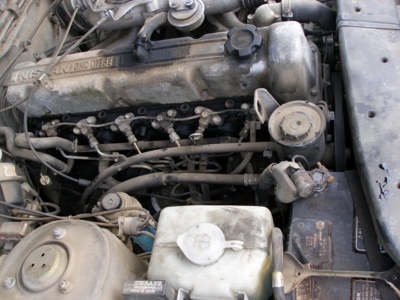 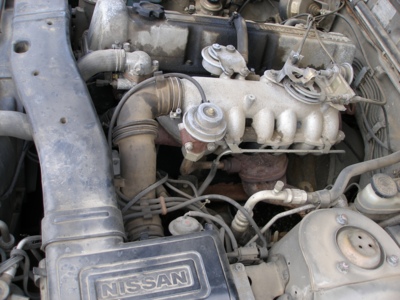 hell if i was closer id so eat that car up

Is this the same one you ran into a while back in front of your local Napa (?) in PT?

Nice score Al! I felt good about the $300 parts car - good for you!
Ben Martin

Ben, this is the one parked in front of the local hardware store over a year ago. I met here when she came out and gave her my card (and the URL for this site). She thought she needed a MF Switch, and I offered her one and got one out and set aside for her, but she never came by.

I won't even be in town for the next three days, so I can't triage it . . . and I really, really have other things I should be doing!
Top

[replying here, because of interest to all]

> What kind of work does it need? How much are you asking?

I have literally worked with it less than twenty minutes, and I have to leave for Vancouver, PDX, McMinniville, PDX again through Sunday, so I won't know for several days.

It's probably a good guess that something will need work in the front suspension, due to the miles, that the PS rack boots will be shot as they always are, that the alternator diodes may be new or may be on the verge of failing . . . this is an old car. But I don't know any of that.

That's ALL I know about it. I haven't opened the trunk, looked at the tires, pulled dipsticks, checked for rust, NOTHING. I just had to get it out of AutoWork's parking lot before I left for the weekend, so I spent the minimum amount of time to get it fired up and moved to work.

If I do nothing to it, if you just come and get it, I'd like $300 for it. I'll give a 1983 FSM with it, of course, and I'll make a set of keys for it (it has only one, wrong blank key right now). Could probably find an OEM radio for it in my stash. That may seem like an unreasonable "profit", but there are hidden costs for me even for this kind of deal, it's not profit taking to the extent you might think.

At first glance, it looks like a solid $700 car after the maintenance is done and taillight replaced. Possibly $1000 around here, due to my involvement in the BD community -- I'm always being hit up to sell mine or find one for folks. But I don't want the work.
Regards,
Al S.

I sold this today, to Mark, to whom I sold my '84 F250 SC diesel a few months back. He's already hosed out the engine compartment, spliced in a fix for the GP fusible link connector, and checked the front end for loose bits (none found). He's registered here and will probably be posting updates. I've changed the Topic title to reflect the new ownership.
Regards,
Al S.

The bad GP fusible link connector 9M that prevented this car from starting:

I loaned Mark the intake plenum from my spare engine, because his is cracked. This is my spare:

The above is an '81-82 style; the '83 is different in some way I haven't investigated and the part Nos. are different. I don't care which style I get, but I need to keep one on my spare engine.

Does anyone have a good one spare? I need to replace this one. I'll buy it, of course.

Next, why are the rear wheels positive camber? Click on image for a better, larger pic. The LR seems especially tucked under.

The only visible rust-through: 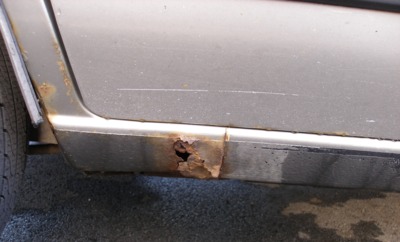 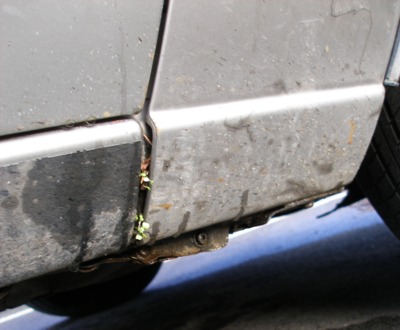 rear camber.is normally upset by setting the ride hieght incorectly.fitting non standard coil springs.has to be done to suit the aplication the car is used for.raising or lowering an IRS bluebird/maxima is a waist of time.

you need to bend the rear arm or fully remake the crossmember mountings.this is not the case with 90's multy link nissans.

the inner bush has a toe adjustment ,this effects camber a little.

Might want to check a 1984 or 1985 toyota camry since it comes with an intake that might fit in that it is adjustable by having a metal center section.

If anybody can post the inside diameter of both ends, I might be able to confirm it.
Top

I think the positive camber came with the car, mine has it and it hasnt been in suspension bending accidents. Also in the brouchure of the car I can see the wheels are a bit positive camber in the back. My guess is that the rear springs are so weak that two people sitting in it makes it have perfect camber. I got rid of this problem by loading a milk crate full of oil and trans fluid, and a bulky chain, along with a couple extra car jacks and all the extra garbage that I dont feel like taking out of my car

Check if there is a couple of wishbone spacers in the springs, the car is standing mighty proud for 20 something years old.
'83 maxima sedan, l24e, a/t, black

The springs origianlly used on the sedan IRS are weak and have a short life.

You can tell if the car has the original rear springs because the ass will be dragging on the ground.

I replaced mine with a "heavy duty" spring and it corrected the ride height, but road holding suffers greatly. Coming down an off ramp last year in the sedan, I got on the brqakes hard and the rears just locked, fronts were doing all of the braking, I could feel the rear end lurch upward and almost loose contact with the pavement.