Do you have a Factory Service Manual yet? If not, get one. You absolutely cannot get by without. As a new member, please see The FAQ for a link to a canned eBay search for Maxima FSMs, or monitor the eBay FSMs thread, where I post new auctions as I have time -- I do miss some, I am not religious in my eBay scouting. And I "always" have spare Maxima FSMs if you cannot wait for a "deal" on eBay, for $20 + shipping.

Have you read the Cruise Control (ASCD) thread?

The OEM Gen1 Maxima CC does not use engine RPM for road speed sensing. The pickup for the CC is buried in the speedometer head. One Yellow and one Green wire with bullet connectors lead to the sensor, and they are separate from the other cluster harness connectors. 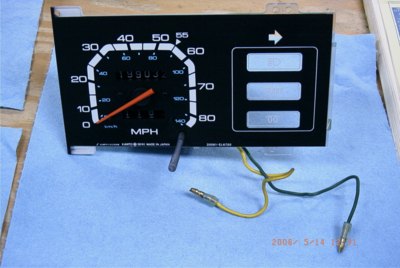 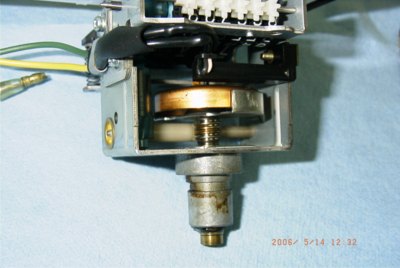 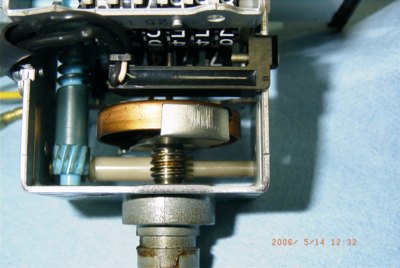 By far, the most common problem we see with the CC is cracks/leaks in the small vacuum lines. Doesn't exactly sound like your problem, though.

In the shop, I'd diagnose this by putting a portable scope on the speedo sensor head wires and running it on the lift, seeing the waveform and frequency coming out of the head. Is your needle steady? If the speedo cable is introducing frequency shifts up and down (binding cable = wobbly needle), the CC works erratically.

I can see a vacuum leak making the rig's setpoint fall from where you set it, but not the reverse (set at 55, car accels to 60).

If the frequency of the signal from the sensor in the speedo head is steady, and the lines are not leaking vacuum, I'd go for the ASCD controller. Haven't (yet) heard of a bad ASCD controller or sensor. Maybe yours will be the first.
Regards,
Al S.

I know this is off topic, but its not worthy of a post. I was wondering, how can you calibrate the outer drum of the speedo further away from the inner drum, my speedo reads high because of a differential swap, and I cant find a reduction box with the proper threads on the speedo cable.

From the pics above i dont see any kind of adjustment screw, bolt, or anything. Im willing to change it and drive by the speed zone radar thing a million times until I get her right
'83 maxima sedan, l24e, a/t, black

Re: Cruise Control RPM pickup on LD28 maxi's for tach?

blueeagle wrote:Does the factory cruise control have a rpm pickup on the LD28 we could use for a tachometer?

I missed part of this Q.

I hacked the EGR Control unit and reverse-engineered part of the schematic.
The control unit has a two stage VR-Sensor amplifier, among other circuitry.
At the amps output, there is a nice 10V square wave signal available. I thing the signal could be used as-is to drive a engine-tach. Since the IP pulley has 6 holes it will deliver 3 pulses/crank rotation. Thats exactly whats needed for a 6-cyl. engine tach. Further experimentation is needed. A two transistor amplifier may be used if the tach is loading the circuit to much. Most of the parts used in the control unit are ready available or may be substituted. The T1 transistor, is a general purpose NPN and the IC1 chip is a Hitachi general purpose quad-opamp. That chip is kinda hard to get but may be substituted with an LM324. I will use this circuit to build my own GP and EGR control unit. I will post/edit more info as available.
Here is the circuit, click on the image to re-size:

Update:
despite the fact, that the IC1 output has about 650 Ohms output impedance and would drive a tach directly, I added a simple two transistor buffer circuit for safety reasons. This buffer will not affect (load) the rest of the EGR circuitry and is short-circuit protected.If anything goes wrong with the tach connection, it will not damage anything. With close to 100mA@12V output, it will drive ANY tach.
The pics above shows the diagram and layout. To build it, I used a proto board from Radio Shack. Cut off a piece from it so the final size was 1-7/8" x 5/8". That small PCB fits inside the EGR controller plastic case. As shown in the diagram, there are 3 connections to the main module. The power connections were made directly at the main connector. Pin1 is the B+ and pin10 is GND. Pulse pick-up wire is soldered to one leg of the R11 resistor, where it connects also to R14 and pin1/IC1. The tach output wire is fed through a small hole drilled in the plastic case, next to the connector. I insulated the bottom of the PCB with insulating tape and inserted it in a small plastic bag.
I used a SUN-PRO super tach II ($27.64 @ Amazon.com) to test the set-up. A 120Hz 200mV sine wave from a generator was providing the speed-sensor signal. As seen in the pic, the tach shows 2400 RPM, exactly as it suppose to be. 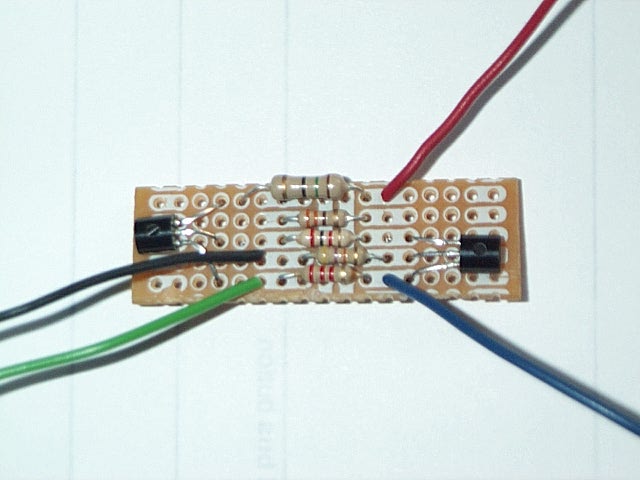 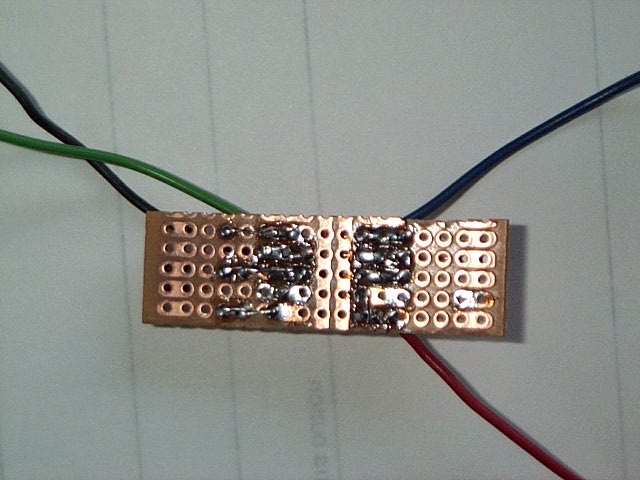 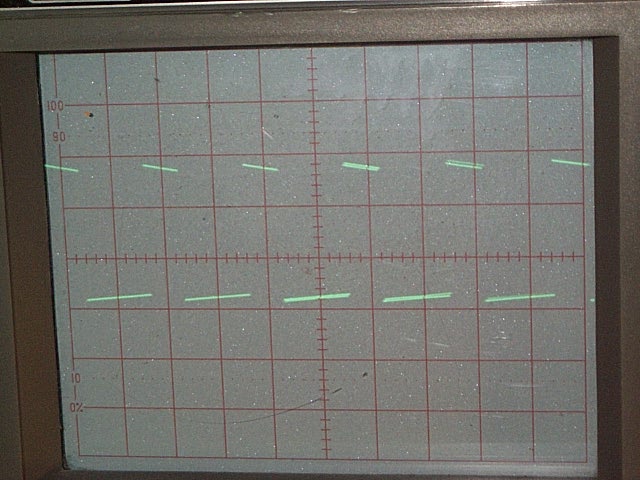 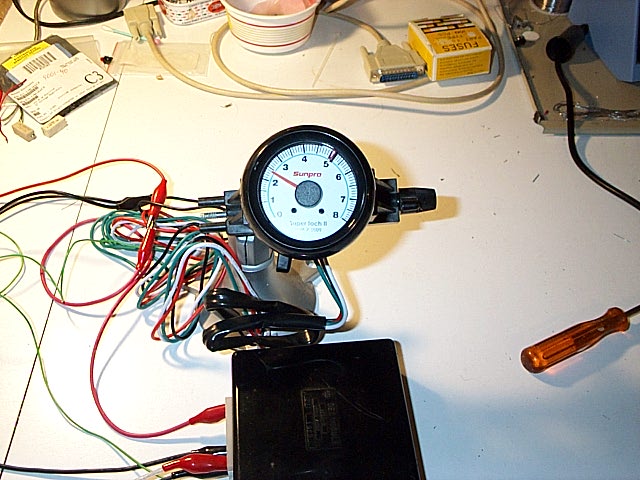 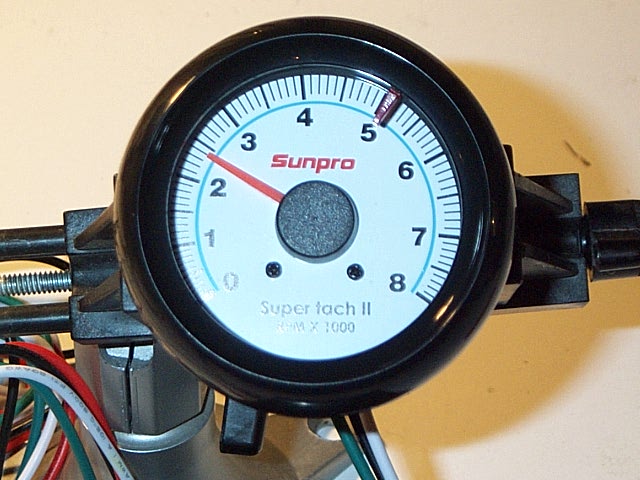 Great work, Chris, and even better: the pictures and recipe! 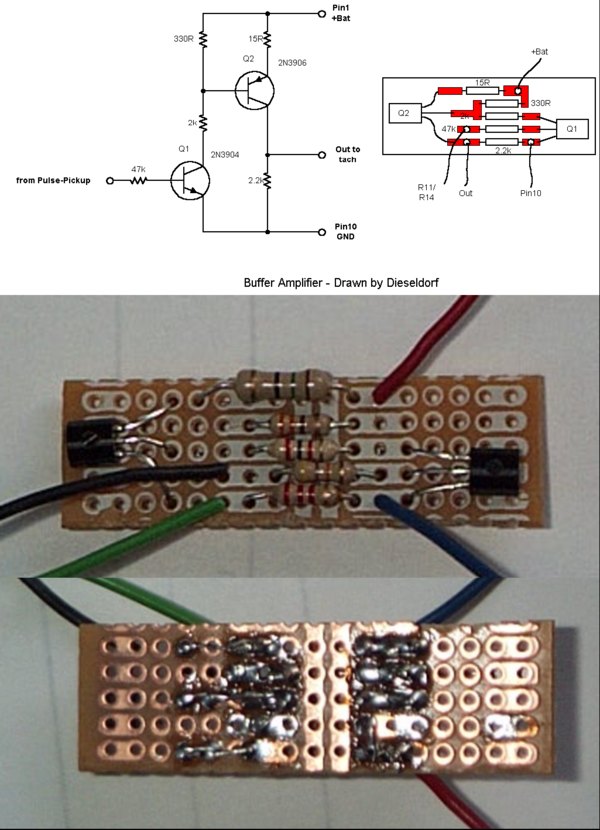 From the scale, I assume that the resistors are generally 1/4W?

For others, since I just had to go look this up, I'll contribute that the resistance value suffix 'R' indicates nothing in this case, so the resistor on the collector of Q1 labeled "330R" is 330 ohms, and the one on the emitter of Q2 ("15R") is 15 ohms. I have not seen the 'R' notation suffix before, but then I rarely had the opportunity to diagnose equipment with the benefit of actual schematics or official test points, and I am well out of that field now.

1983 has a High Altitude and Low Altitude EGR control unit. 1983 uses an extra solenoid, for four-stage EGR. The number of wires in the EGR control unit harness are the same for but '81-2 and '83, but the wire colors are different. There is not an accurate wiring diagram for the 1983 EGR system's electrics, so direct comparison with the earlier system is not possible, but I assume it is wired differently to accommodate the additional solenoid and additional functionality.

Are you going to install this in your Astro?
Last edited by asavage 12 years ago, edited 2 times in total.
Regards,
Al S.

Al,
all resistors are 1/4W, including the 15 Ohms. I used 1/2W because that's what I had in my inventory. The R labeling is now internationally used and means the decimal point. A 3.3Ohm can be labeled 3R3 and so on.

I did not see the inside of a 1983 EGR unit, so I can't tell whether it has the same circuitry. For this type of EGR controller, all you need is B+, GND, sensor input and the buffer-amp output. The speed-sensor amplifier is completely independent and does not need the other stuff hooked up to the unit. It can be left unconnected.

To answer your last question, I might use this set-up in the Astro temporarily. My goal is to make one controller, based on a micro-controller, to control glow plugs, electric radiator fan and have tach output. Thinking of safety features like low oil pressure and over-heat warning and shut-down. I will also make this information available for anybody who wants to play with his own DEC control.
Astro Van with LD28 propulsion
'84 Mercedes 190D 2.2L 5-Speed Manual purchased 06/12 SOLD 06/13
'86 Ford Escort Wagon Diesel MT Sold 07-17-08
Top 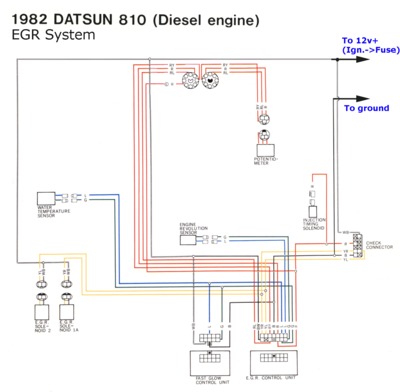 I have to laugh -- almost exactly two years ago I accidentally bought a 1981 EGR Controller at a JY, thinking it was a GPC. When I realized my mistake, I labelled it and threw it in a box on the shelf, thinking to myself, "well, there's one thing I'll never need."

Thanks to DieselDorf, I was wrong!

I soldered up a DieselDorf Tach Adapter board today. May mount it to my spare EGR Controller tomorrow and possibly test it Saturday afternoon if I get ambitious. 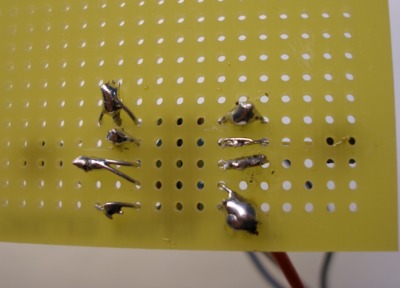 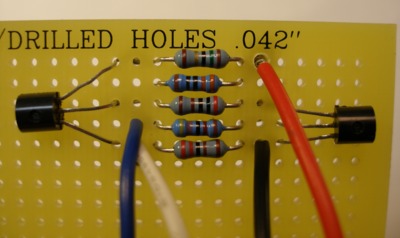 Unfortunately, I have only the single 1981 EGR Controller right now.

I can borrow an '83 EGR controller and ship it to you, would that work?
Top 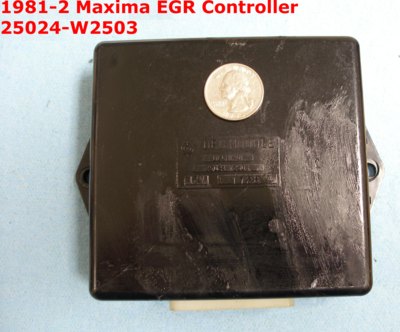 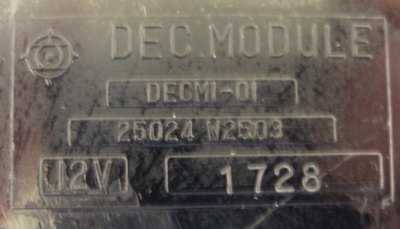 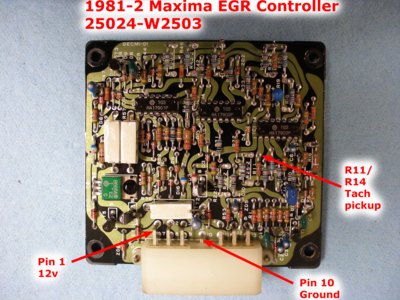 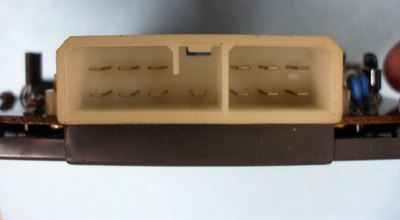 A couple of strips of RTV . . . then tape in place to hold it until the RTV cures. 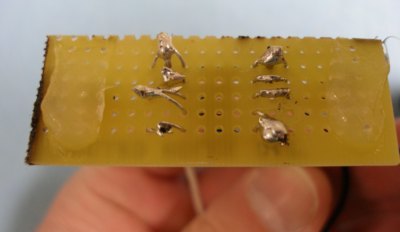 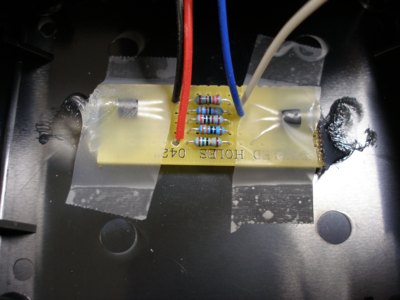 Lots of clearance above the PCB for this additional board. However, the best clearance is in the center, away from the taller components. A bit of notching to let the tach output wire to the outside. Not shown: a knot in the white wire as a strain relief. 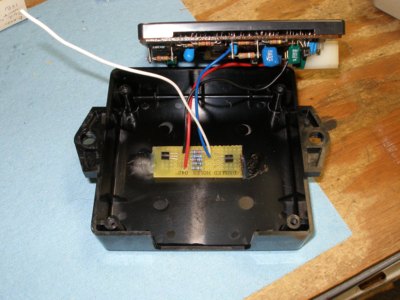 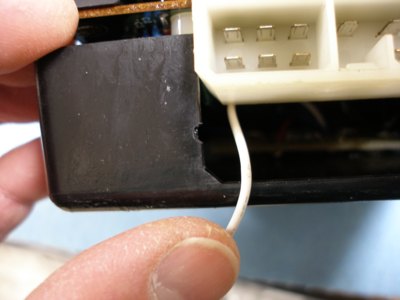 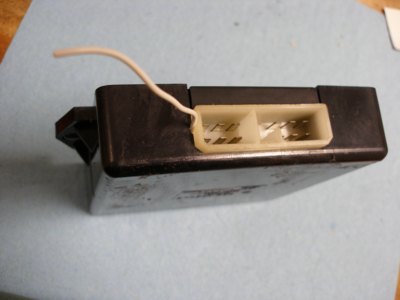 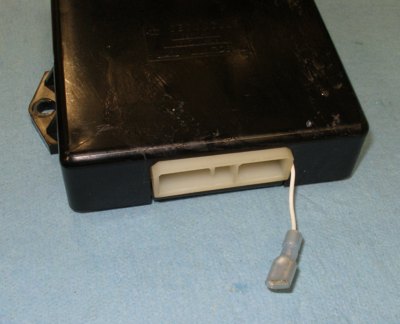 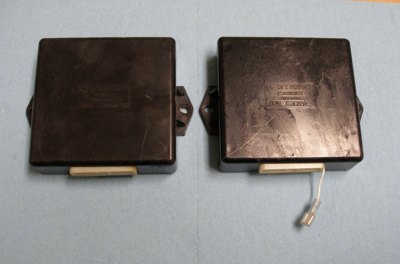 Removing the EGR Controller: it's located on the left kick panel, just behind the hood release cable.

When you remove the underdash cover (four plastic 1/4-turn fasteners, one No. 3 Phillips screw), you'll have to unplug the Voice Warning Module ("Talking Lady") connector, then move the whole underdash cover out of the area. 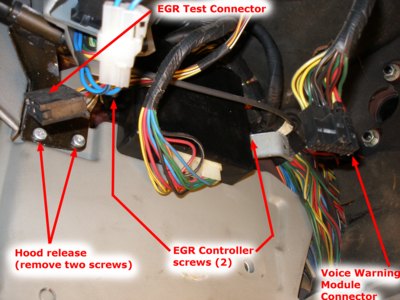 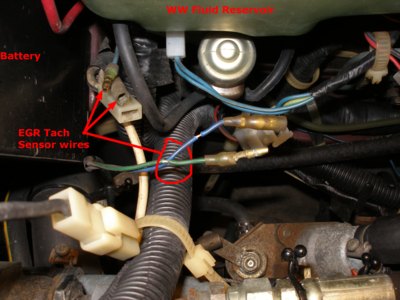 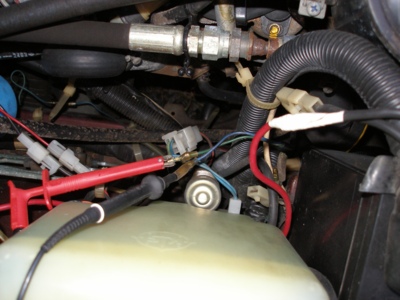 I've got an NOS EGR rev sensor somewhere, but I'm not going to change it soon, since for some reason it bolts in from under the IP belt sprocket. 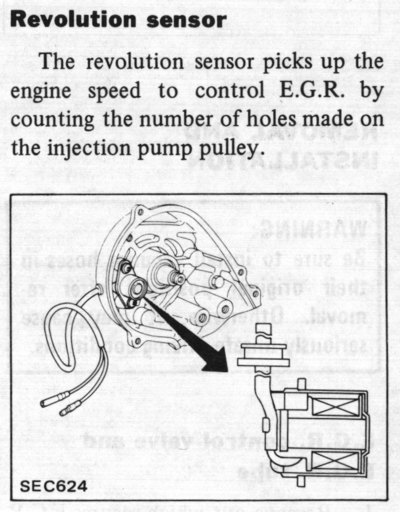 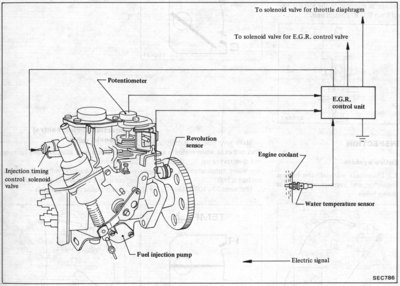 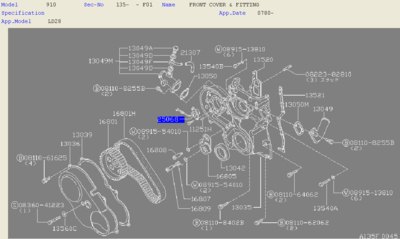 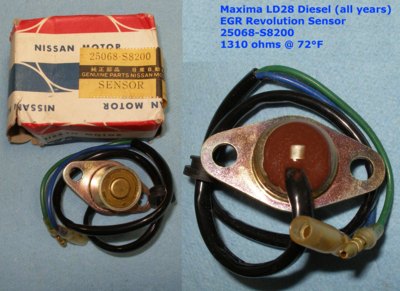 Great work Al!
Lots of details. Even a cavemen can make this to work

Yes, I still have your address, though not your last name, which I should have for shipping purposes. I'll get an '83 EGR Controller from Mark's car this weekend and ship it to you. She can drive it a couple of days without EGR.

I won't be able to test mine at all

Maybe I can get Carimbo to come over with his '82 Sedan. Both my other local Maxima diesels are '83s. And I am not up for pulling my IP belt sprocket only to change the rev sensor (recall that I have a tach pickup on my alternator on this car anyway, and I changed the IP belt only 15k ago).

Carimbo: this EGR Controller mod might enable your fantasy of installing that '83 gasser cluster with factory gasser tach, and making it work. And you might throw an ohmmeter on the connections I show above, the EGR Rev Sensor leads, and make sure yours is not open as mine is.

Others: I bought enough raw parts to build ten of these. For '81-82 Maximas, I can offer pre-modded controllers on an exchange basis. The parts cost is nil: even brand-new parts, with shipping, the per-unit cost is only about four dollars. It's all labor. Chris will receive a kicback for every unit I mod: it would not have been possible without his input, he did all the heavy lifting.
Regards,
Al S.