Looks like it's at home. From the pic of the rear I think I saw the drain going down between the manifold legs - doesn't that run it a little close to high temps off the exhaust manifold?

How do you do your soldering - or is it brazing? Do you just drill out a hole w/a hole saw, press fit the fitting and lay a bead along the edge? Or do you do something to give it a little flange for better strength?

I used a step drill-bit to make the holes and press fit the fitting. With the help of a propane torch and soldering paste layed a solder bit around the edge. A flange for support would be nice, could not find any around. Will see how long this will last. I will tie the drain hose away from the exhaust manifold. I am planning at trip down to Arizona, New Mexico and possibly to Mexico this January or beginning February.
Astro Van with LD28 propulsion
'84 Mercedes 190D 2.2L 5-Speed Manual purchased 06/12 SOLD 06/13
'86 Ford Escort Wagon Diesel MT Sold 07-17-08
Top

dieseldorf wrote:At the same time, swapped out the 4-speed MT for a 5-speed from a ZX. However, after warm-up I hear some noise coming from the MT. But only at idle in neutral. When I press the clutch it goes away. Is it the throw-out bearing or input shaft bearing? I did use a new throw-out (chinese). Filled with Mobil1 synthetic gear oil.

If you aren't hearing noise when driving, it's worn gears (excessive clearance). Fairly common on this trans.

Philip had the same problem on his 5-spd after rebuild. He found a certain viscosity oil that helped. Here's another mention.
Regards,
Al S.

Well, I did the first major trip in my van. I went to Southern California and back. Trying to avoid cold weather and snow in the mountains I took the coast route on Hwy 101.

Total miles driven 2166. I went over a roadside truck scale (for logging trucks). The van weighs 4050 LBS with a full tank and including me.

Best mileage was achieved when an engine speed of 2800 to 3000 RPM could be maintained for long periods of time. This was not easy to accomplish because at 3000 RPM I was doing 70 MPH in 5th gear. Most motorists travel 65 or less, mainly in Oregon. Further, with head wind or long inclines there was not much power left once the engine speed dropped below 2500 RPM. If I had to slow down, it took a lot of fuel to come up to speed again especially on hilly roads. Fourth gear promises to be more fuel efficient on country roads. At 3000 RPM travel speed is 55 MPH.

Fuel Prices: previously one could get best Diesel prices at big Truck Stops. That changed. Now most Truck Stops want cash for fueling, especially in Oregon. They add a premium of up to 20¢ a gal for Credit Card payment. Even when paying cash, their prices were higher than regular brand stations. Example: Pilot Truck Stop in Victorville, CA $2.19/gal cash. One mile down the road at street corner Shell $2.05/gal credit. 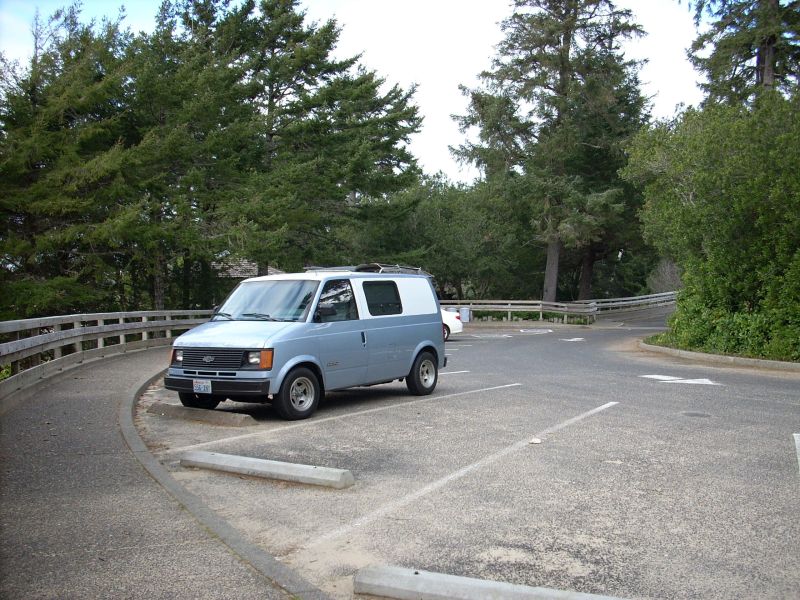 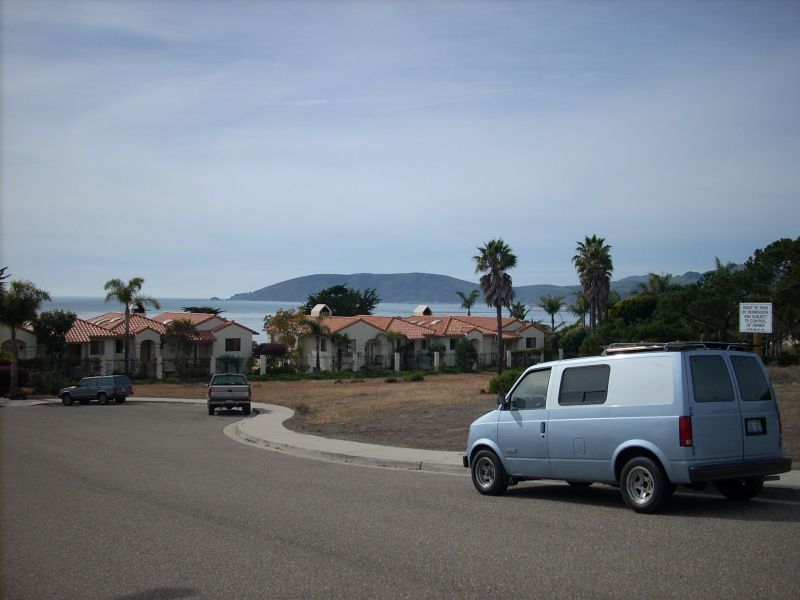 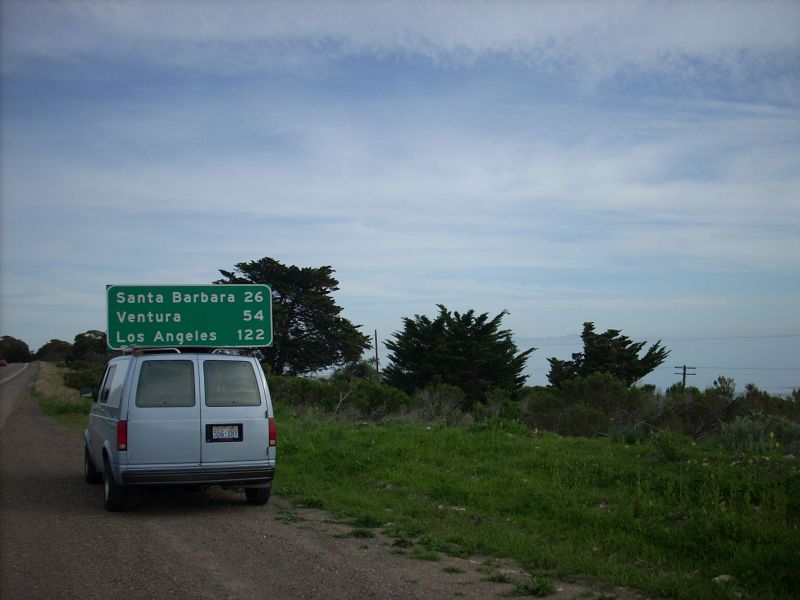 Thanks for the info. Did you put in the left "rear" window? Looks like a nice traveling vehicle.

Gotta love being able to push a vehicle that can carry large things with the aerodynamics of a brick breaking 20mpg.

Still not happy with the 5-speed

I am attempting to fine-tune that manual transmission to my application.
Between all the tranny types, the gear ratios are same except 1st and 5th. The FS5W71b tranny I got came off an "performance" car. The seller could not be more specific. I assume it was an 280ZX which may use 3.062 for 1st and 0.773 for 5th. Anyway, due to the van's weight I have to make the gear ratios taller.
After more reading I came to the conclusion that I have to replace the gears from two different transmissions:

Al, will that work? Do you have by any chance the part# for them and are they still available? Thanks.

Anyway, Al's ten league technical boots are too big for me but here's a small thought: Seems like you could jack up a rear wheel, mark the output shaft, yoke, whatever, go to the front and mark the crank; then turn the engine one rev w/a wrench and take a look at the output shaft mark. Should work no problem w/5th; might want somebody watching it w/1st to check the number times it goes round. Not good for exact measurements, but should give you some clue about what you have in there now.

Seems like "performance" vehicles would have the higher ratios - you may already have what you want in there.

Im pretty sure taller gears are higher ratios while smaller ones are considered shorter. Least thats how ive been spilling it .
'83 maxima sedan, l24e, a/t, black

I am done with Diesels

I'm having t he opposite experience. My 82 wagon got hit on the front wheel and I was figuring to move on - but when I reviewed (extensively) vehicle prices and gas mileage I decided to fix the wagon. Waiting now on a new (used) spindle/strut with fingers crossed, to see if the right parts arrive (after a couple false starts). What I found is that there are good cars out there, but when you start looking for wagon-like stuff with good gas mileage you're talking few to none. Going a little smaller, the newer hatchbacks like the Honda Fit are good cars but the starting price is not low - about $13000 for a used one - and the gas mileage isn't that great. My second choice would be a Camry wagon, but the mpg seems to top out at about 27 on a good slow day.

With big tires I get about 24+mpg in the city (I drive like an old lady) and if I keep below 65 about 30 or so in the highway - including mountains. The car leaves a few things to be desired (quite a few) but the numbers are really hard to beat. I pay about a 10% premium for diesel and get at least 15% better mileage than anything (decent) I can find for less than, say, $10k. I was kinda surprised. Plus the diesel has been pretty hassle free so far, though I guess I'm in line for some new accessory bearings pretty soon.

We'll see. It seemed like it was worth a few hundred to see if the old girl want's to live another 5 years.

In the midwest, diesel is about the same price right now as regular gas. It was more expensive for a while but has gone down. I wish it was cheaper than regular like it was a few years ago. That's an awesome build you've done there. It's amazing how well that engine went into the Astro.
Lewis - Looking for wheelchair accessible vans capable of a LD28 conversion.
Top

On the road again

Fuel price went down, so I am driving my van again. Back-conversion to gasoline power went away for now. I drove from Arizona (Tucson area) to San Bernardino, CA and back. 430 miles each way. Consumption 25mi/gal.
Best fuel price so far was $3.27 gal in Phoenix at QT Truck Stop (exit 139).
That is unusual, because regular gas stations have lower prices than truck stops

Finally I finished the Air Conditioning conversion. It is a mix between the original Astro parts (condenser, evaporator), Nissan A/C compressor and a new thermal expansion valve (TXV) and receiver-drier. Original GM orifice tube and accumulator was removed. It working very good. Below are some recent pictures. 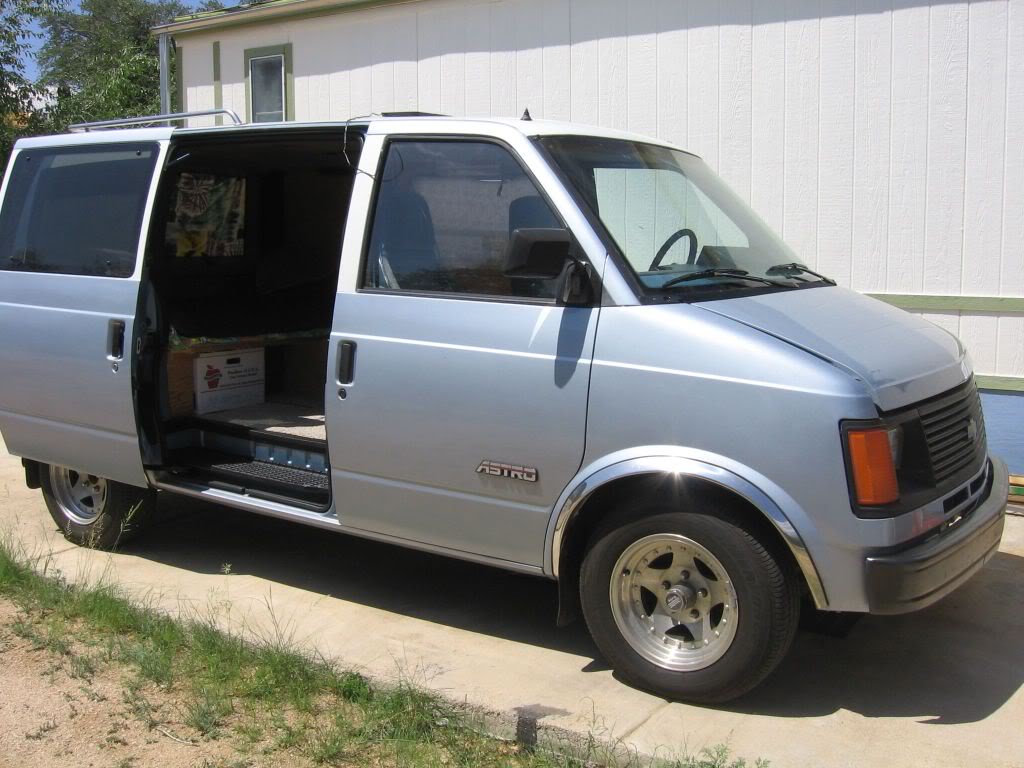 Side view with sliding door open. 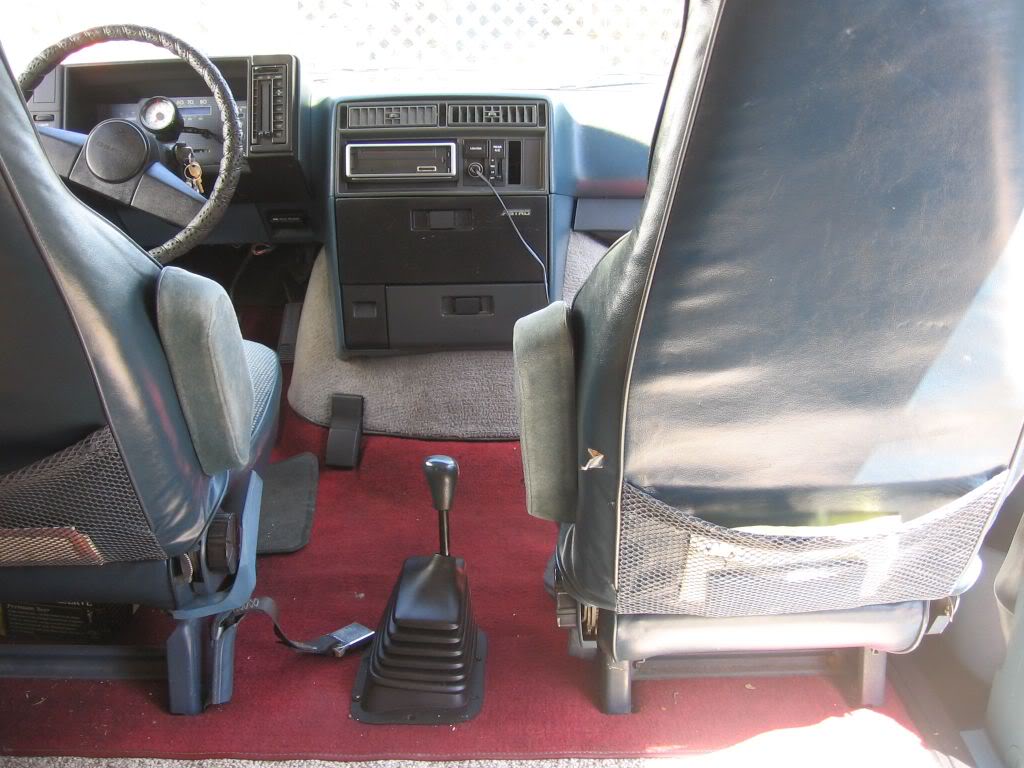 View to the front. 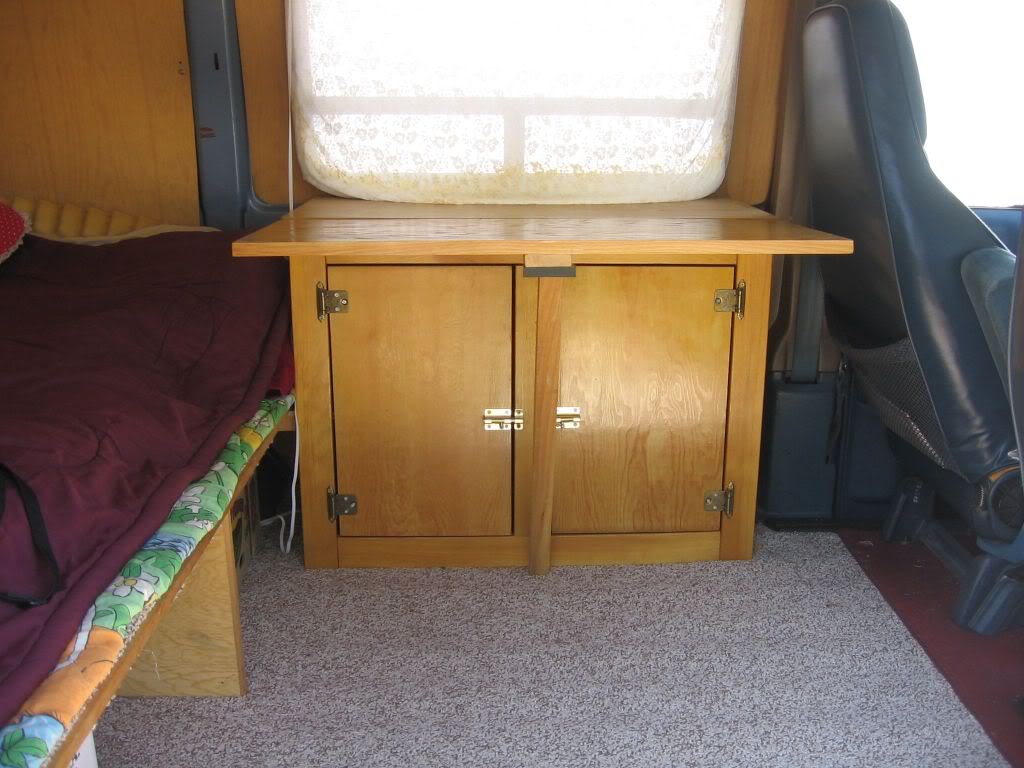 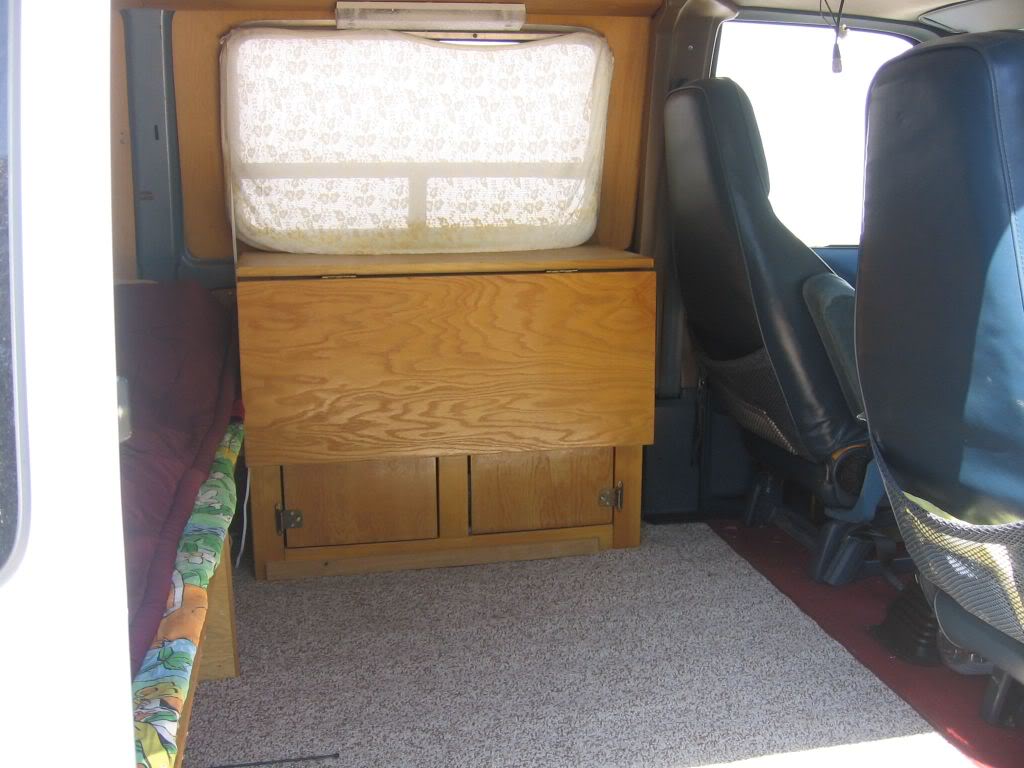 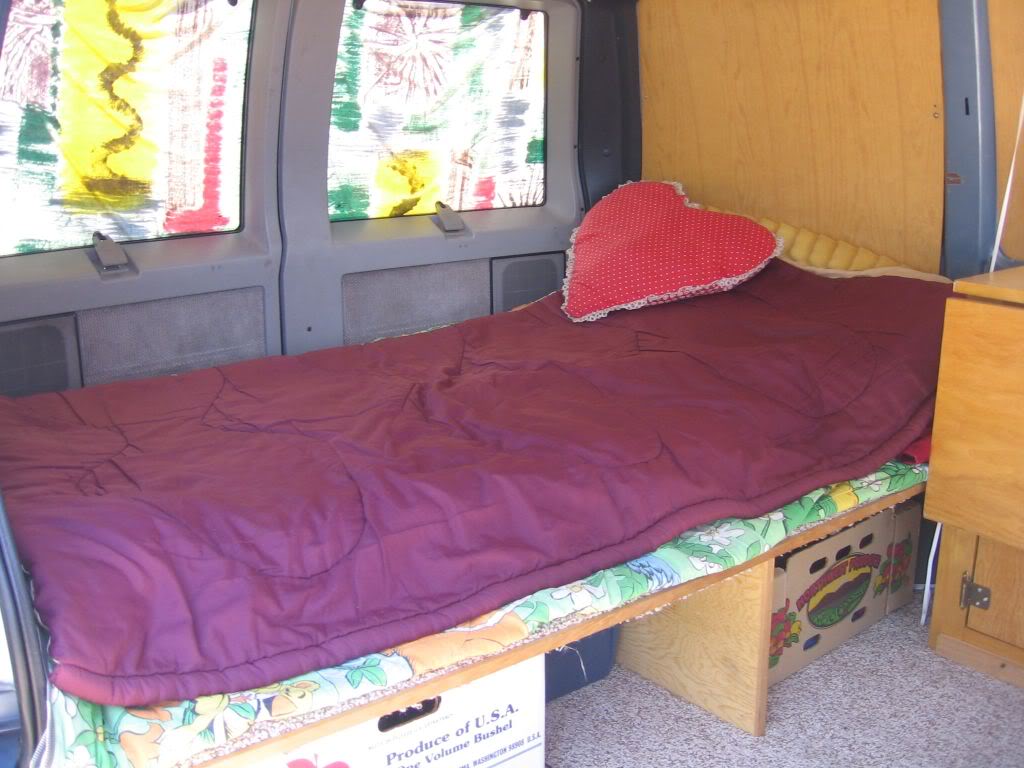 Re: On the road again

dieseldorf wrote:Fuel price went down, so I am driving my van again. Back-conversion to gasoline power went away for now.

If you start to contemplate converting back to gas, would you consider selling instead? I would like to have the LD28 in something like a van or small pickup.
Matt B.